Nihari courses through my veins, and I’m sure this is the case with a lot of the readers of this post. Good. We’re on the same page. I’d rather not waste my time with people who cannot understand the prevalence and significance of nihari in the Pakistani food canon. I’ve been eating it religiously for as long as I remember, and have learnt to distinguish the bleh from the yay. Listen to me. I know good nihari like a sommelier knows good wine.

Before we proceed, here’s a technical introduction to the dish. Nihari is a stew – some would say curry – that is mostly prepared with beef or lamb. Of course, this does not stop some fanatics to exclusively stick to the chicken variant. I prefer beef nihari. This stew is carefully cooked over a low flame for 6-8 hours, regardless of the nihari recipe. The trick is that it is often simmered in the chosen animal’s bone marrow, which gives the stew its rich, meaty flavor. The unique consistency of this dish is achieved through a balance between tender morsels of meat that break away from the animal’s bones and wheat which is added bit by bit to the broth. And of course, its signature flavorful kick is courtesy of a far too generous amount of masala and long pepper: the more the merrier.

Waris Nihari House is one of the most popular distributors of this dish in Lahore. I remember my first visit to the restaurant- at age twelve or thirteen- like it was yesterday. My mother and sisters sat in the car and I sat next to it on a rickety table with my father and brother. The one thing we shared, though, was flavorful and wonderful plates, full of mouth-watering Nihari. I have visited Waris countless times since. It’s literally the same story every time; tidh bhar janda hai, niyat nai bhardi (your stomach’s full, but your desire to eat more isn’t).

The OG Waris Nihari is located off Akbari Road near Urdu Bazar. The lack of air conditioners, proper seating, good service and basic hygiene are apparent from the outset, but everything melts away with that first union between naan and nihari. The ambience-desiring bird misses out on the grub. So I urge you to accept the stained-grey lawn chairs, rusty, squeaky tables and uneven footpath and prepare for the feast of a lifetime. Watch the vulgarity and beauty of unfiltered existence around you as children roll abandoned tires down the streets and street vendors sing songs in raspy-yet-melodious voices. Or notice how the pigeons nestle in crevices of Mughal era architecture around you, indifferent of the hot property they have made a home out of. 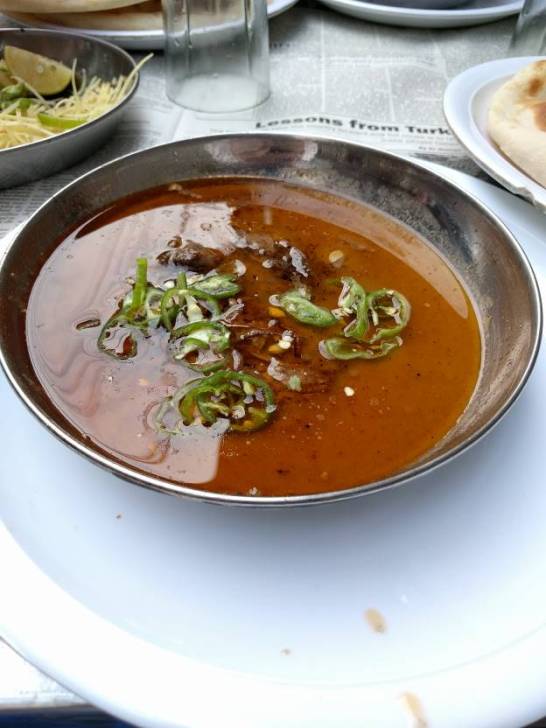 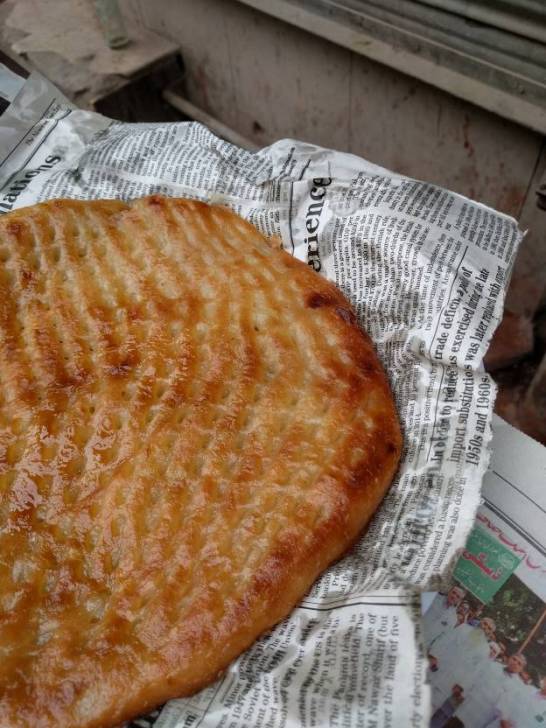 Food takes a handful of minutes – no more – to arrive. Metal bowls accompanied by plastic plates and cheap paper napkins are served. A hospitable amount of customary assortment of seasonings and garnishes that include chopped green chilies, coriander, lemon wedges and sliced matchsticks of ginger accompany the main course in an attempt to save you from the spice-levels. The metal plates contain the main event: oily, aromatic, simmering nihari, complete with a generous serving of meat. The white plastic plates are filled with bulbous khamiri roti, a fermented chapati that you dip into the nihari. The napkins are used with a blatant disregard for the environment, but this is inevitable when you’re eating with your hands.

Waris does not make the spiciest nihari, and for a meal that prides itself on spice, this is a bold move. Instead, the place goes for deep, mind-numbing savor. Much like texting and holding a conversation simultaneously, eating this nihari and holding a conversation is next to impossible. Through this humbling experience, the nihari becomes one with your tongue, coating and coaxing your glands to reciprocate its simplicity. Individual fragments of meat play an integral part in this seduction, breaking the smooth texture and taste of the stew. Waris’ nihari is not sticky, for those who are averse to scrubbing their hands and brushing the tops of their mouths – it is thin at the top, thick at the bottom. Squeeze some lemon onto it and you’ll be begging for more. It’s also very, very oily, and has a good quarter inch of oil (tarka) floating atop anything substantial. But then again this isn’t your everyday meal; reserved for holidays and special occasions, you almost always eat it prior to a planned siesta.

The khamiri roti that the nihari comes with resembles white bread in terms of its color, and billows timid clouds of steam as it is placed in front of you. Waris has, in my opinion, if not the best nihari, at least the best khamiri roti in town, a real star. Fresh, soft and hot hot hot, the spongy texture absorbs the nihari into its air pockets, allowing for a perfect bread to stew ratio, something that a lot of other nihari houses overlook. Light and crisp on the outside and pillowy on the inside, the roti is littered with undulating pockmarks and rising crests.

Sheermaal, a sweet variant of a roghni naan, is preferred by many to cut the spice of the nihari. It looks glorious and is worthy of a bite. Its sweetness is mild and helps you retain the spice of the nihari even if you do decide to cap your meal off with it. I tend to order one for the table and nibble on it much as a communal plate of french fries.

The combination of  meethi lassi, nihari and khamiri roti break me – a complete system overhaul. Basically, I rep this stuff hard. I couldn’t recommend it enough. For Lahore, Waris makes the best out of a good thing. Karachi, I hear, is a whole new universe. I’ll save it for a different time.

Pro tip: For when eating at home, anda (egg) pyaaz (onion) and nihari put together make for a breakfast for champions. And steer clear of Muhammadi Nihari.

With permission of The Milk Sheikhs