Urban Kitchen and the Demise of Comfort Food

A city like Lahore craves new restaurant options on the regular. And when a city craves something new, one of two things can happen. 1) The demand is adequately met. 2) The supply chain gets tainted. In its failing attempts to claim the ‘comfort food’ crown in Lahore’s culinary arsenal, Urban Kitchen is a prime example of the latter. 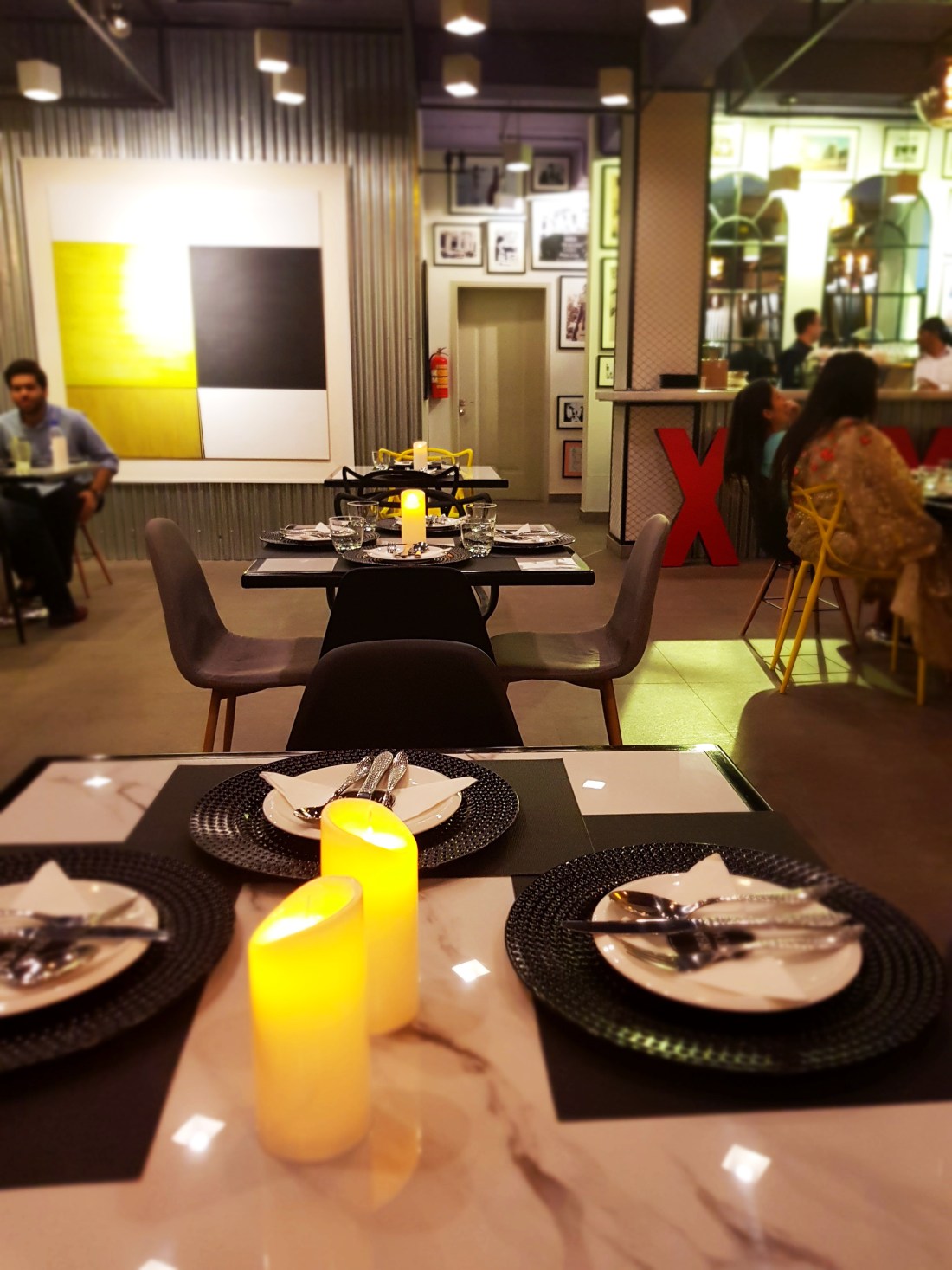 Tucked neatly behind Mini Market Gulberg, Urban Kitchen uneasily occupies two floors. One of these floors is a front-facing jut on the ground floor that houses maybe 6 tables. The first floor is where the action is at. Tin lined walls and industrial design give an ‘urban’ feel. Hanging lanterns, lit up neon signs and hodgepodge variations of furniture mix up the cafe vibe with something that wants to be sophisticated. For me, Urban Kitchen miserably fails to merge a casual grub hub with an upscale restaurant. Sounds pretty cool, you say? Hold that thought.

Pakistan Today gave Urban Kitchen a rave review. And that brings me to what really grinds my gears: fake appreciation. We have hordes and hordes of yes-men giving people like me a heart attack when they say crap like “Tierra Nuestra has the best sushi right now.” I’m sure your daddy came up with the recipe my dear, but if you’ve ever really been a sushi guy, you’d stop shitting through your teeth. 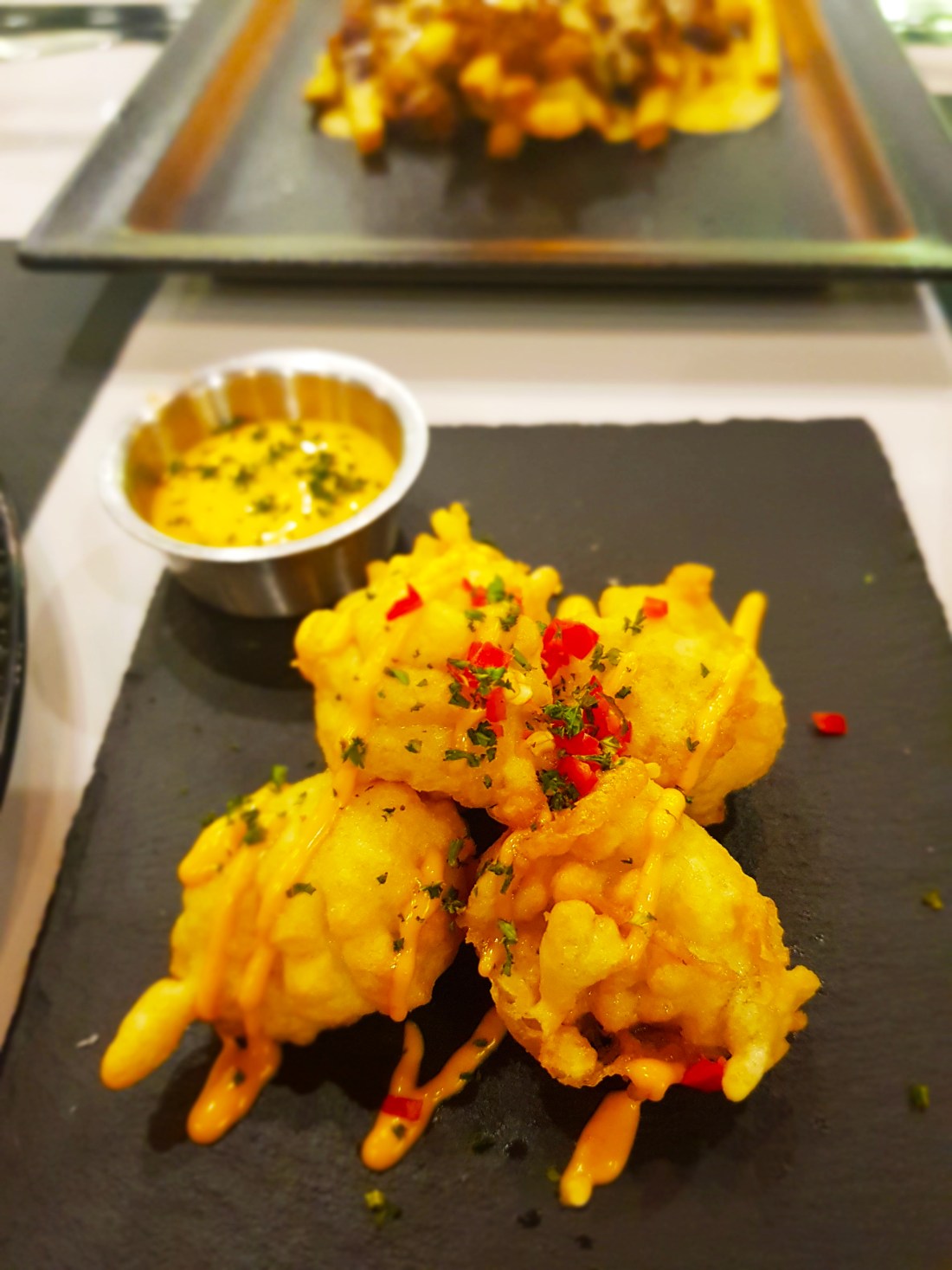 I’ll try keeping this review short, but it may come off as curt. That’s because it probably is. I’m a cheeky little fucker when it comes to takedowns. This one is no different. I absolutely despise Urban Kitchen’s approach to food, in part because of the way the menu has been curated. But this resentment mostly stems from what ends up on my plate. And when we have the winning combo of a poorly patched together menu and a shoddy chef, I start to rub my hands together. Jesus, I haven’t felt so alive in years. I don’t even fucking remember what I ate, it was that bad, and had to sift through pictures from a month ago. Pictures that, mind you, do more justice to Urban Kitchen than Beyonce did to Jay-Z. I do remember now, that my order seemed to have undergone the Chinese whisper treatment: it was relayed to the waiter, then the chef, rid of its substance and, on the way back, it was hard to tell which which was which. If I must, I will give you reasons for why I disliked the limited number of things that I did happen to sample.

Getting the good stuff out of the way before shifting gears a classic Shameel move. Staying true to my own writing style, I will say that the French Onion Soup was pretty darn good, with a cheesy, souffle-like lid. Well seasoned and deeply delicious, I would go back for seconds. The Nestle water, too, was delicious. And this brings me to my favorite part of this review: The Whining. 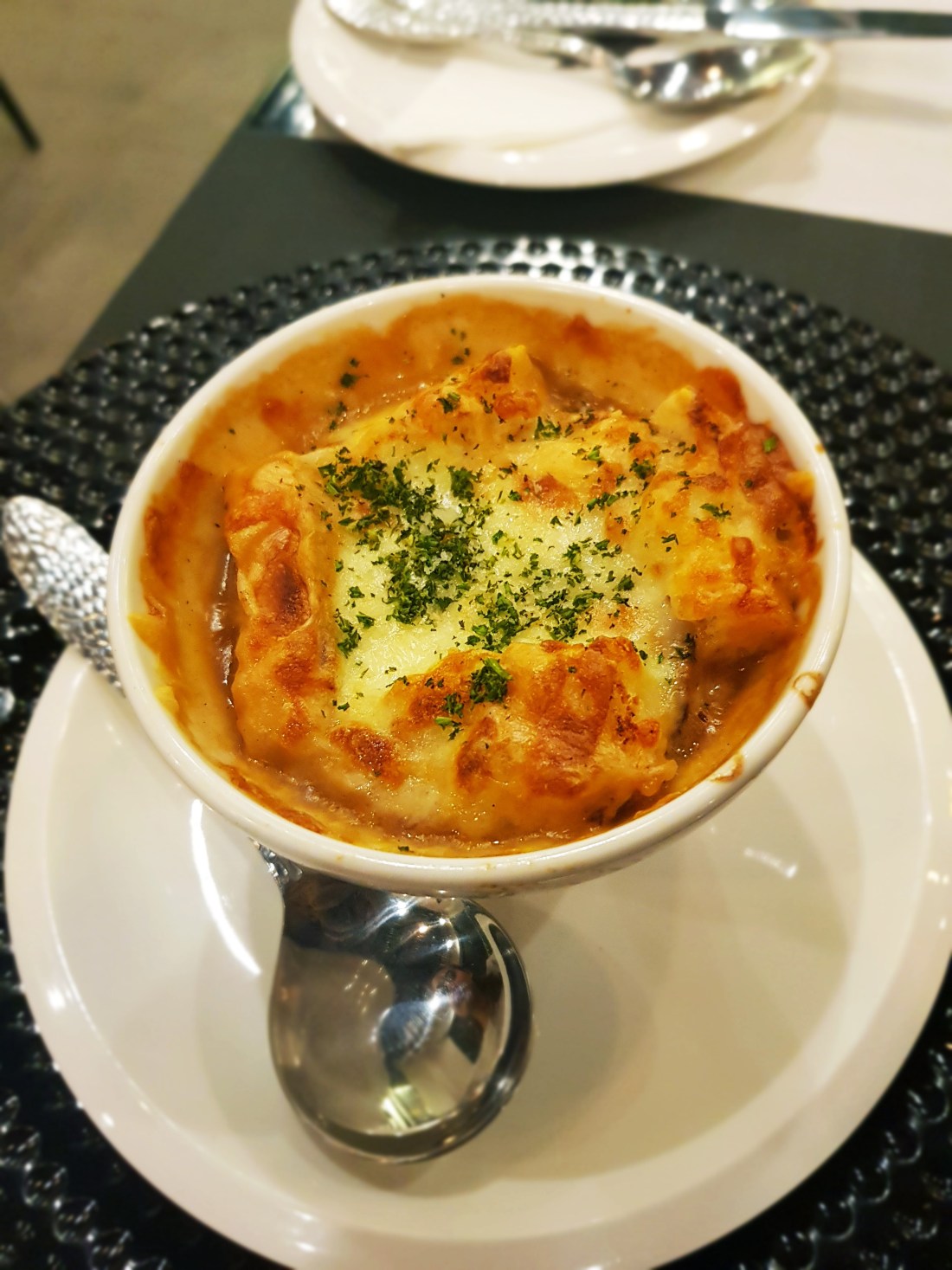 I started out with Picante Poppers. Pakistan Today claimed that “The chicken, the cheese and the sauce were cooked to perfection and I was on a literal roll popping one after another. But these poppers are not for the faint-hearted since their spice level is pretty high, in fact, it’s almost exhilarating.” No. No. No. What I had was a overhyped- and overdressed- mush of chicken and starch that reminded me of K&N’s nuggets. And while I am no stranger to K&N’s (we grew up eating it for lunch), I certainly expect better from the new kid on the block. I’ll just say I didn’t enjoy chewing on it forever, and that the spice levels were underwhelming.

Next up were the Chili Con Carne Fries. I knew when I was ordering them that they would either be a massive hit or a terrible, terrible fail. See, I’m a big fan of Chili Con Carne. I also, like most sane people, like fries. Chili Con Carne Fries, too, I dig. The thing is, I  offer a special prayer before I go out to eat anywhere. It’s a simple request from the forces that may be: Please, let the fries be fresh cut, and not straight out of a frozen box. In this case, the culinary gods ignored my pleas. The chili con carne was watery, blocky, and oh, so not cheesy. The fries were straight out of a box, I didn’t need Gordon Ramsay to tell me that much. Overly airy and slightly damp, the fries would look better in a trashcan. 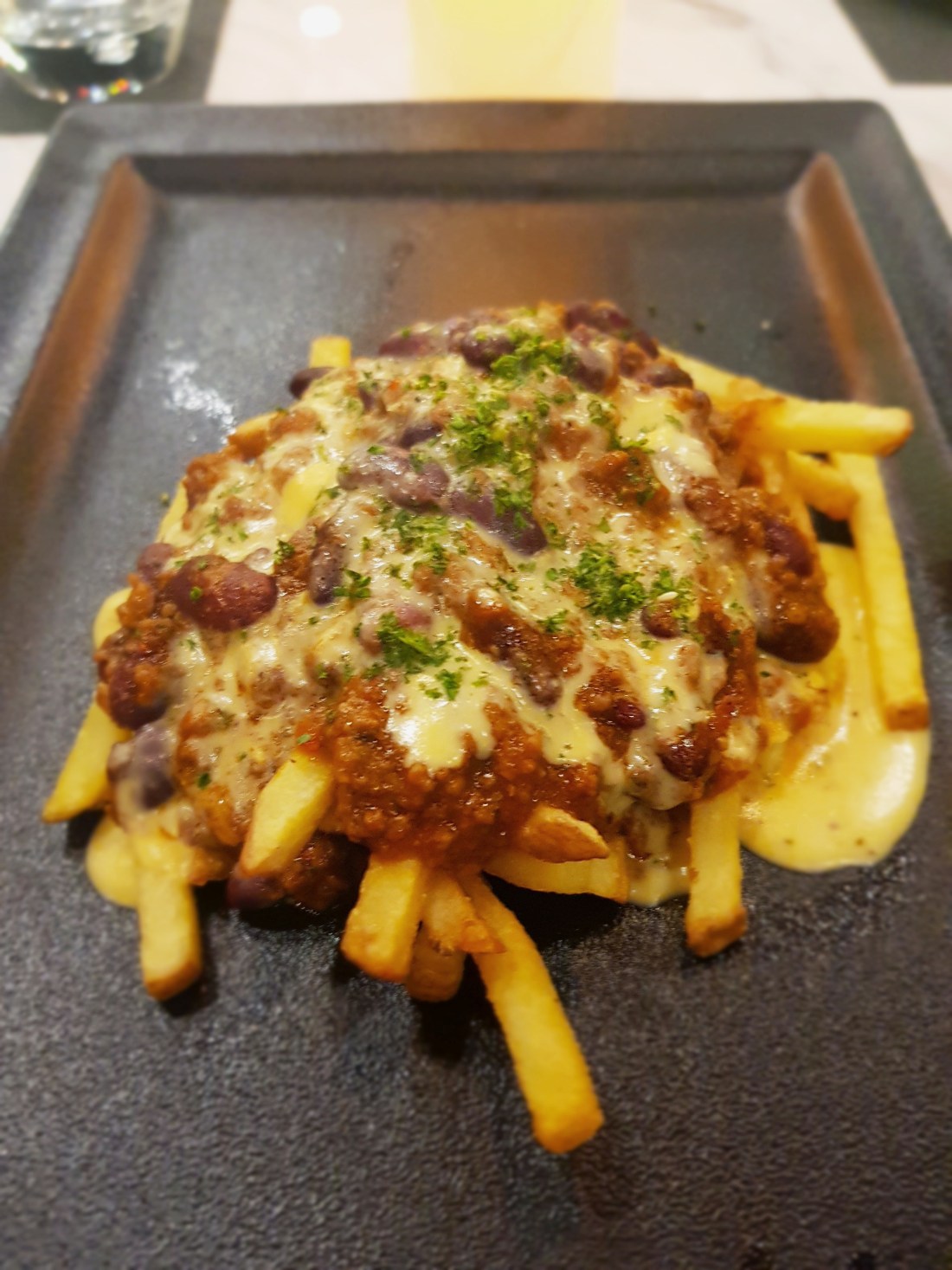 An order of the ‘Le Relais de L’entrecote’ seemed like it would be an adequate representation of Urban Kitchen’s ability to deliver. Beefsteak with gravy and fries. How bad could it be? Very bad. There, I’ve told you. Don’t order this, even if you do stumble in somehow. The beef was meh… flavorless, and I believe the kitchen had tried to unsuccessfully imitate chimichurri to pair with the steak. I will say that it was plated well, and the pink center on the beef restored a bit of my faith in humanity. Not entirely though. Just a bit. I’d skip this order.

The Hong Kong Fried Beef Ho Fun was no fun. A measly serving, a lack of heat (both temperature and spice), and excessive usage of oyster sauce meant I could not taste what I was being served. I was getting Tierra Nuestra feels all over again, and those are the kinds of feels I could do without thankyouverymuch. The noodles looked tar-laden. It was, however, better than the rest of the items that I had ordered, so I kept my head down. 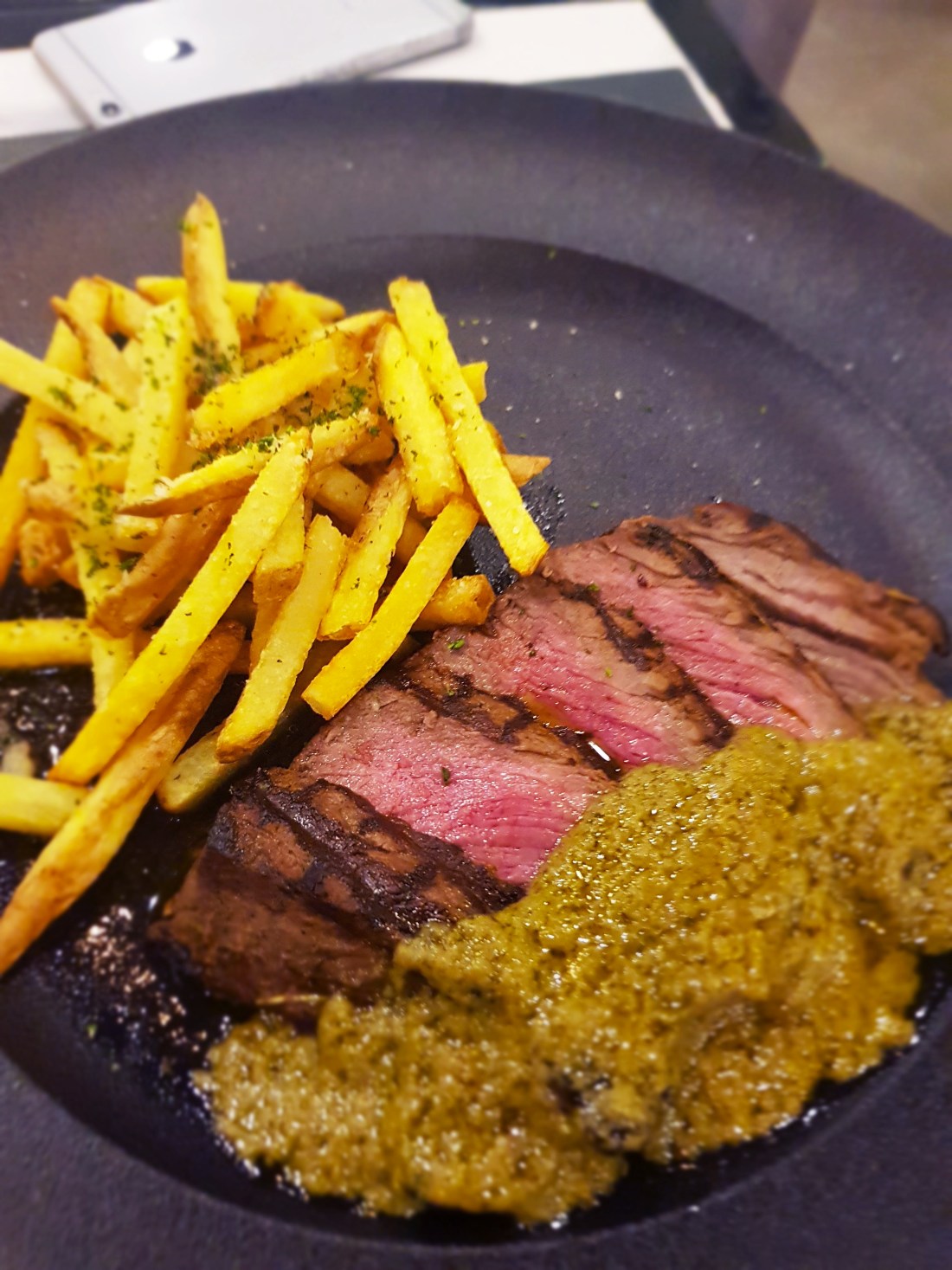 I didn’t bother with dessert. This is also typical me, as I was more interested in bolting out the door than sticking around for any longer than necessary.

Urban Kitchen was hyped up to be the best thing to happen to Lahore in years. But I think we’ll have to reconsider that accolade for the time being. While it’s true that I did not get to try their Mac and Cheese options (especially the one with the beef bacon), if that’s what they’re banking on, they’ll be hard-pressed to last for over a year.