As I walked through the doors of Tulip Inn and went over to the counter, one of the men at the counter asked me to sit on the sofa as the hotel manager was occupied somewhere. The manager appeared to be a jolly man because he laughed boisterously every once in a while. I sat there and browsed the walls – sprinkled in blue and red – the counter, the fridge with beverages and the clocks on the grey wall, which showed time in Paris, New York, London, Tokyo, and Pakistan.

There was a glass painting, made on a mirror, in which a rural woman could be seen dressed in red and lifting a red pitcher. Her black hair was woven in the regional style into a rope like structure hanged long. I couldn’t put my finger on it, but the carved painting on the mirror captivated me. Then, I talked to the manager and he was more than happy to let me see the hotel and write about it. He asked one of the uniformed men to show me around the place. 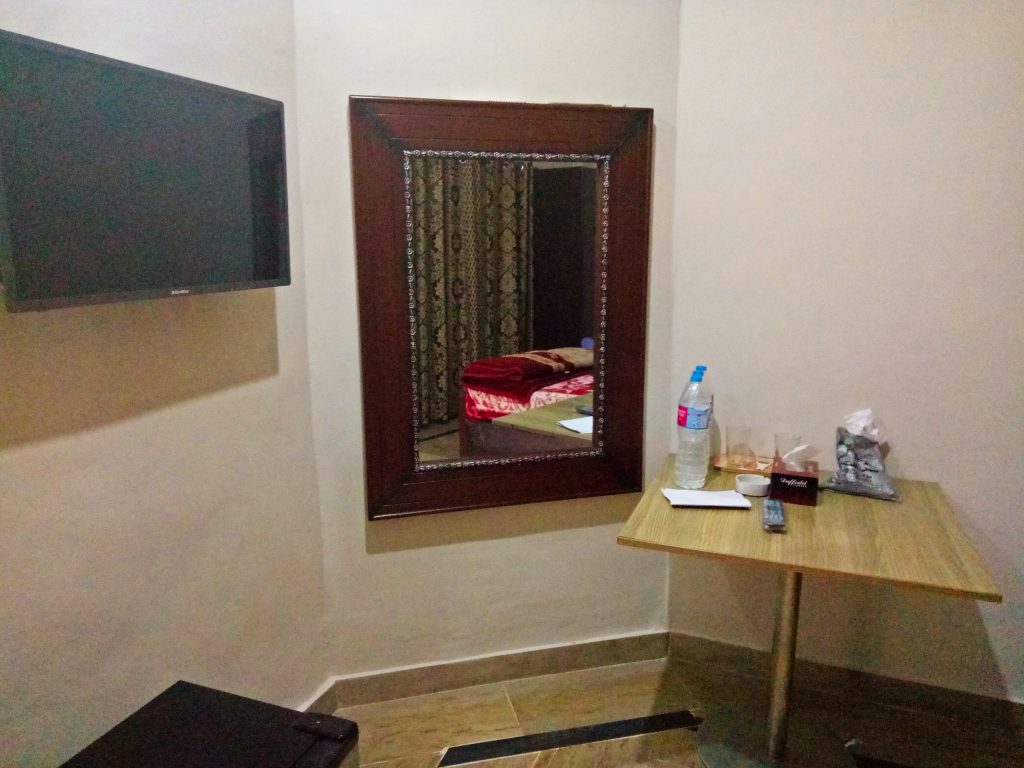 We went towards the back of the hotel and walked towards the stairs, which led to the different stories of the building. The hotel may have appeared to be quite fancy at first, but as I walked around it, I saw a number of wires hanging free and wall-paint peeling off. This observation spoiled my initial opinion of the place.

Later, the inside of the rooms regained my trust in the place. They had clean marble floors, well-arranged and blanketed beds, pictures hanging on the walls and a number of facilities like telephone, internet, and so on.

The floors were carpeted colorfully in some rooms as well and had mirrors attached to walls. In addition, the windows were curtained with dark, red cloth. Each room contained dark brown cupboards in which the visitors could place their luggage and hang their clothes.  Pictures of handmade crafts were displayed inside the rooms and outside it, on walls in the corridors. Different plants grew in earthenware pots placed outside the rooms. The washrooms exhibited all necessary equipment and were decorated with dimly colored tiles. In the hall, where the counter was placed and in the corridors, there were numerous paintings of Muhammad Iqbal and Muhammad Ali Jinnah, which made the place look like a school.

In fact, on my visit, some educational activity was going on as well and I could hear children talking and adults guiding them regarding them something. I asked the man who escorted me as to what was happening in the hall but he did not respond verbally. It was as if he did not hear the question.

The manager told me that there were three Tulip Inn hotels in Lahore. Apart from the one that I visited, there is one situated on Abu al Isfahani road in Faisal Town. The third one is located on Abdul Haque road.

My overall impression of the hotel is that if you want to live for few days in a ‘fine’ hotel without asking for too many luxuries and demanding too much decor, Tulip Inn is worthy of a visit.