True Brew Records (specifically its subsidiary True Brew TV) has recently been covered by various media organizations. With a Pakistani take on the traditional newsletter, the recording studio/hangout spot floods my inbox with lame puns that I can’t really get out of my head for the next week or so. Annoying? Sure. Effective? Definitely. I sit down with Jamal Rahman of True Brew Records (TBR) to find out what the True Brew collective really does. 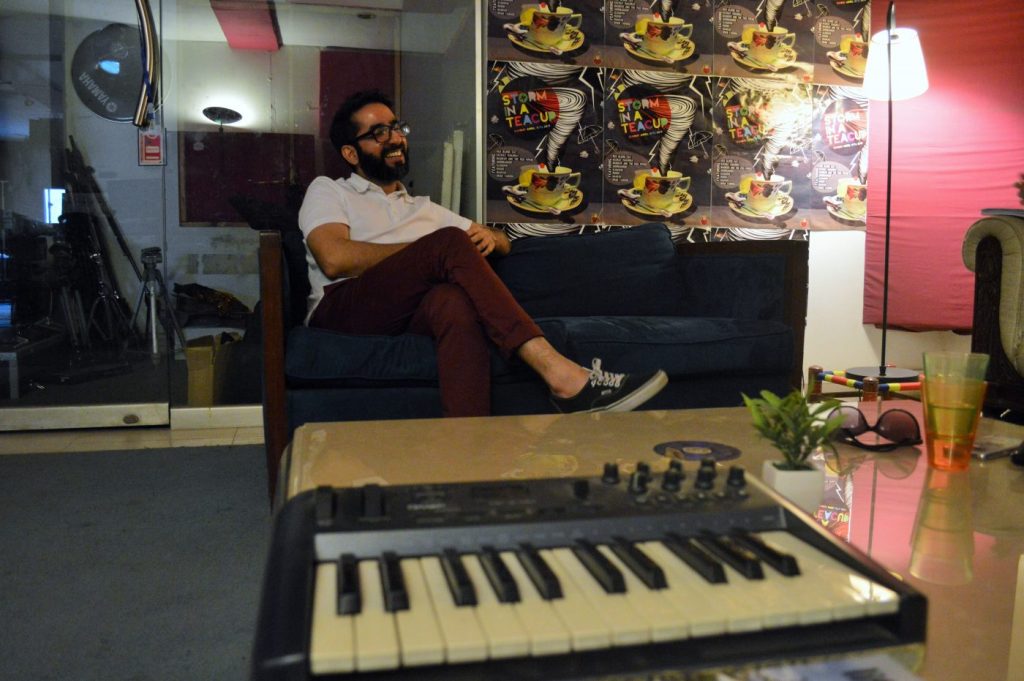 A former art student turned music producer, Rahman studied art for five years in England before moving to Pakistan and trying his hand at music production. The artists featured by True Brew TV are far from mainstream; there is an emphasis on originality and aesthetics. There is a cool dismissal of mainstream trends in music.

So far, the singles are mostly in English or are bilingual. There is none of the usual (irritating) emphasis on “covers,” as Rahman puts it.

The studio is located next to Ogilvy in Gulberg. On our way to the studio, Urooj and I discuss Pakistan’s current music scene. Urooj makes a valid observation: music once used to be a communal experience, much like PTI rallies in recent years. Gone are the days when families attended rock concerts together, when artists organized concerts sans corporate sponsorship. True Brew might just be reshaping this landscape. 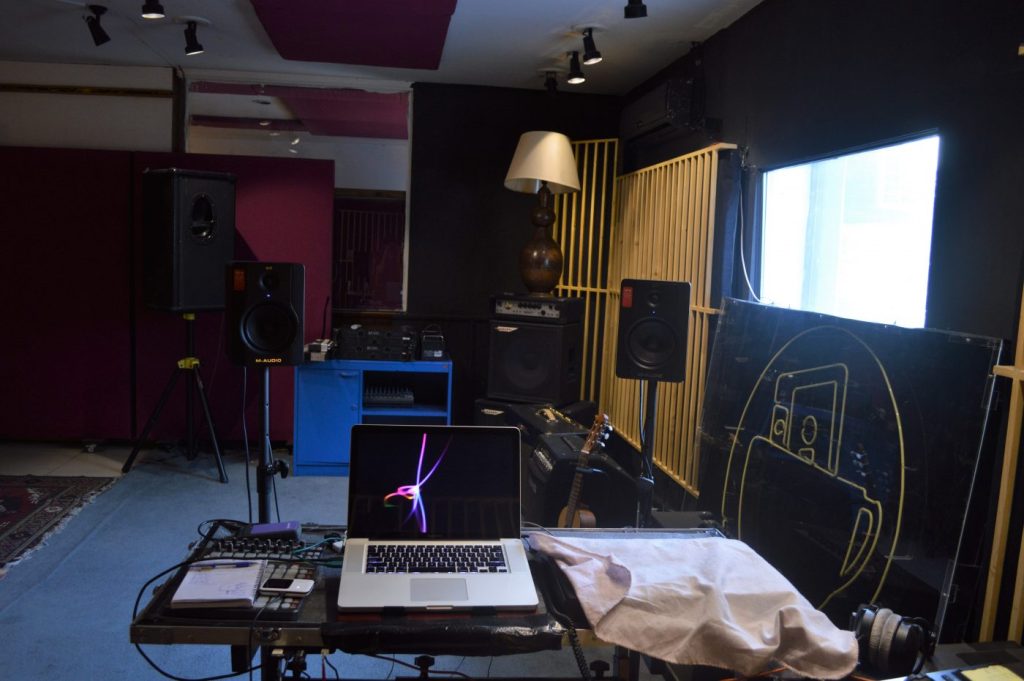 Soon, we are in True Brew’s studios with Rahman, a music producer and the owner of True Brew Records. It’s an intimate sort of space, and Urooj kicks off the conversation with a question about the ‘structure’ of True Brew.

What does this mean?

“Which means signing artists, recording them and taking responsibility for everything they do, essentially. That’s what we initially set it up for, but in Pakistan income streams from music are haphazard. Since there is no live circuit in the country, revenue is not consistent. For instance, you cannot make money from ticket sales. So the label format doesn’t really work here. I found this out after I’d already championed the studio and gotten into it.”

Was commercial value an afterthought?

“So the initial idea was to produce, guide and mentor artists and obviously also get them gigs; kind of do a holistic package of sorts. That, I quickly realized, wasn’t going to happen. But I stuck with the name.”

That does clarify things. The only such Pakistani company I know of is Fire Records, which was owned by AAG TV, producing artists like Ali Zafar and Ali Azmat up till 2013. Its website is defunct, and the Facebook page seems to be engaged in political propaganda for Geo TV instead of music.

Why do I bring this up? Artists no longer produce albums/CDs like before. If you want to listen to (for example) Quratulain Balouch’s body of work, you could end up at the nearest DVD store buying a pirated CD – or simply downloading it.

True Brew TV is currently working on three video segments. Two of these are recurring, and alternate every Thursday: ‘Live at True Brew’ (live performances recorded at True Brew) and ‘Singles’ (self-explanatory). The third series is called ‘Meanwhile,’ a behind the scenes look at the studio and its processes. The True Brew team is small: Rahman is the music producer, Omer Lahooti is the audio engineer and studio manager, and Zain Peerzada manages video and social media.

Getting featured is straightforward. It requires original work that is “creatively breaking boundaries,” and that’s that. 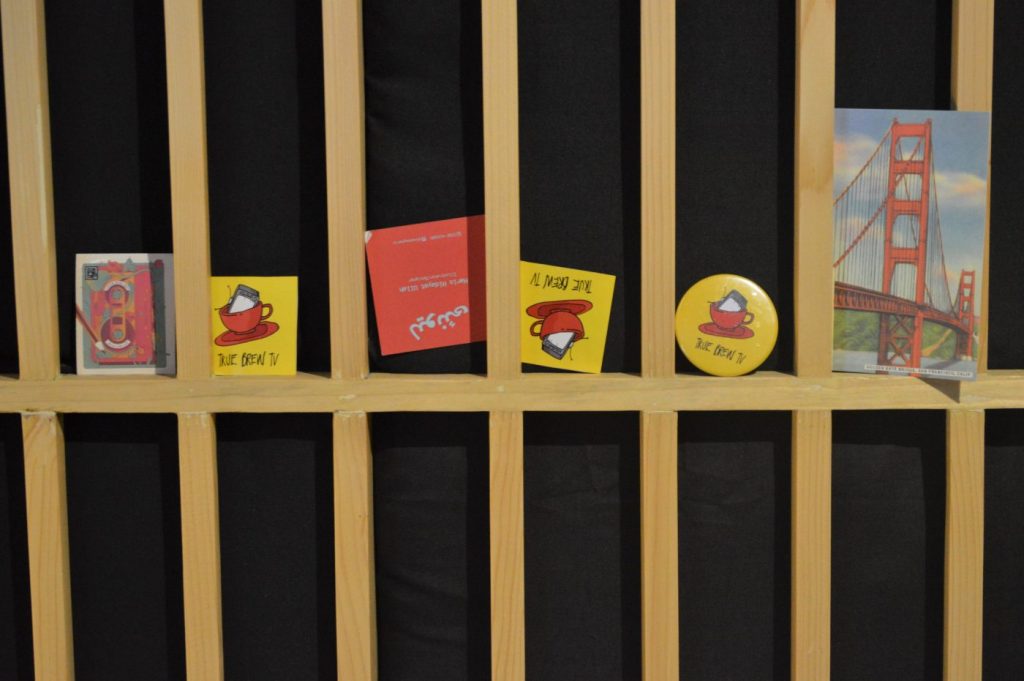 Urooj and I wonder where we can find the albums of artists TBR has launched.

“Because of internet piracy, the older format of record labels almost died. CDs don’t sell much. Spotify and iTunes are there to validate that claim,” he begins.

“Music is not an easy market – all we have now are corporate or school sponsored concerts. There are no dedicated venues anymore where music is performed.”

We discuss how corporations have jumped on the music bandwagon and have started offering passes for events instead of tickets. “This removed the power of younger artists. Not having to pay for a performance made audiences less invested in bands.”

We go on to discuss how this systematic overhaul has made corporations the makers and breakers of new talent. Upon reflection, this is painfully obvious; I say painfully because the number of not-very-good artists that have been co-opted by big brands and forced down our ears has been exponentially rising. “This leads to trends in music,” Rahman points out, “non-risky music.”

“Pakistani rock in the 2000s was great,” he continues, “A lot of bands were ‘underground’ in the 90s. Most artists from the 90s music scene went commercial later.” 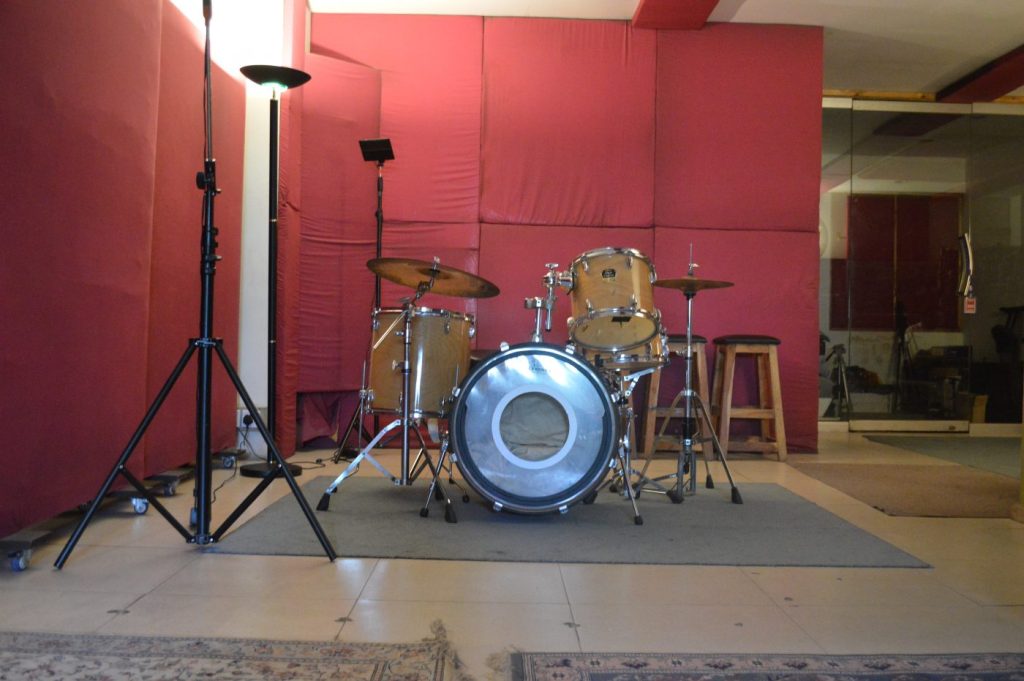 So what’s pulling young people towards music these days?

“Inspiration is global now. Not just Pakistani. There’s a new crop of musicians now, doing music for the sake of music.”

I’ve always wondered: is the market creating the artists, or is the marketing creating the market? I’d like to think it’s not that hard to create a trend, given enough money and a platform. Works in fashion. So in music, if the target market prefers Sufi rock, Punjabi pop or songs about nationalism, that’s what the brand pushes.

“Young people. Eighteen-year-olds to thirty-six-year-olds. Anyone who wants to listen to something new.”

I note that True Brew’s videos have a very quirky, Seth Rogen-ish feel to them.

“We have limited reach. We get thirty, thirty five thousand views per video. It’s a quality (over quantity) group of people.”

Why are so many artists featured by TBR singing in English?

“A lot of independent musicians are writing music in English.” Pakistanis may like listening to English music, but they prefer that it is not made by a Pakistani.

We discuss the good old days of Offbeat (a music store in Lahore that was shut down years ago). It was a time when knowing an artist’s body of work was considered cool, even impressive; when people actually listened to entire albums because they had to buy an entire album.

“The Offbeat culture – the mixtape culture – doesn’t really translate to Spotify or Soundcloud. In a way it’s empowering, to be able to send music to anyone in any part of the world instantly, but the experiential part of music is missing.”

Rahman talks about holding a tape in his hands, and lending it to a friend –

An album was a physical part of a person’s life back then, it had stories and conversations, real life interactions connected to it (as opposed to online comments). 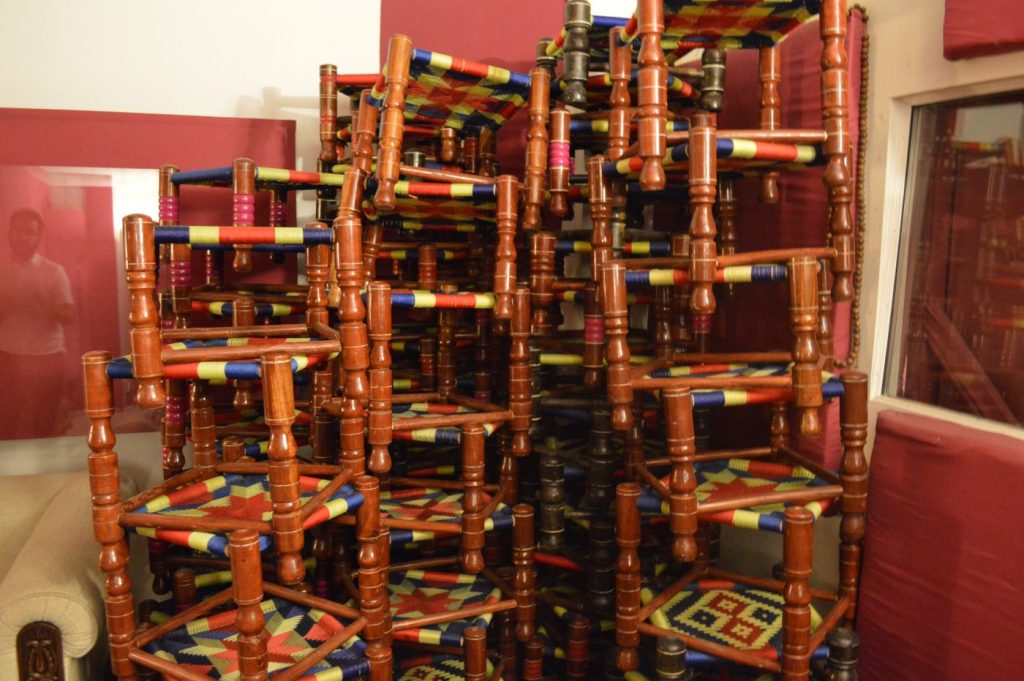 When not seating audience members at a gig, these colorful stools are stacked up in a corner of the studio.

What else does he miss?

“The theatricality of concerts. There’s no performance aspects to concerts anymore (in Pakistan).”

Maybe that’s good, I suggest – young people these days are attracted to music because they want to make music, not just out of an urge to be famous. But Rahman disagrees.

“To really get people invested, a concert has to be a show you can’t stop talking about.”

I suddenly recall Ali Azmat upending a jug of water over himself at a Junoon concert in Beaconhouse Liberty Campus. His long, curly hair, his rock-star persona, and a very large number of preteen girls in the audience; a strong factor in Ali Azmat’s rise to fame had been his wild antics during performances.

Urooj and I ask Rahman about TBR’s monetization strategy, quite bluntly. The way True Brew does it, there is not much monetization to begin with, barring the commercial work that comes their way. TBR, specifically True Brew TV, is about pushing the envelope musically. It’s a “passion project,” as Urooj is fond of saying.

Rahman is unconcerned about the fact that the rest of the music industry is headed in a different direction.

“Everything these days is based on nostalgia – ads and shows are a pristine example of this trend. Everything is a throwback to a genre or a movement. I’m not criticizing folk music or ghazals, just (this tendency of) relying on the success of previous hits. That’s the kind of insecurity I’m against.”

Jamal Rahman may be unconcerned about the direction in which he’s spearheading TBR, but being a part of the rat race is necessary. Staying relevant to corporate clients while churning out original content is quite a tightrope to walk.

True Brew seems to be finding its balance. 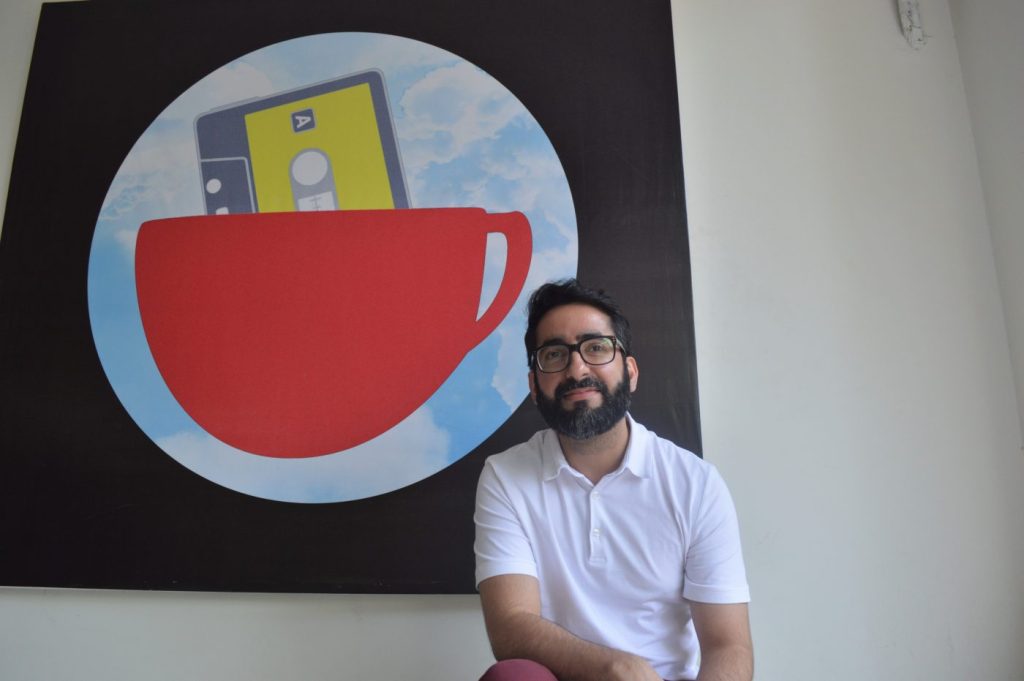 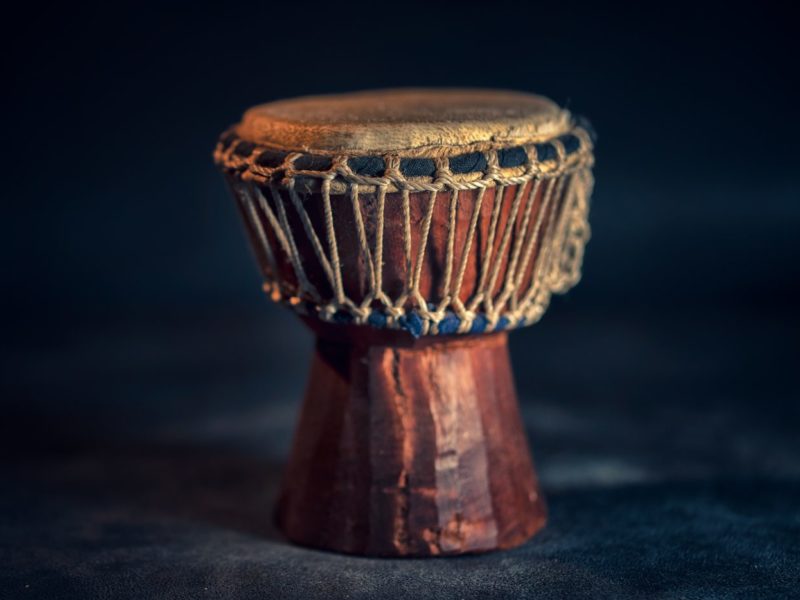