The Kitchen: Beyond the Coriander

A haphazard turn on Gulberg’s Main Boulevard brings you to The Kitchen. The neon sign outside introduces it as a BISTRO . BOULANGERIE . PATISSERIE and a small chalkboard mentions the ‘specials’ menu. 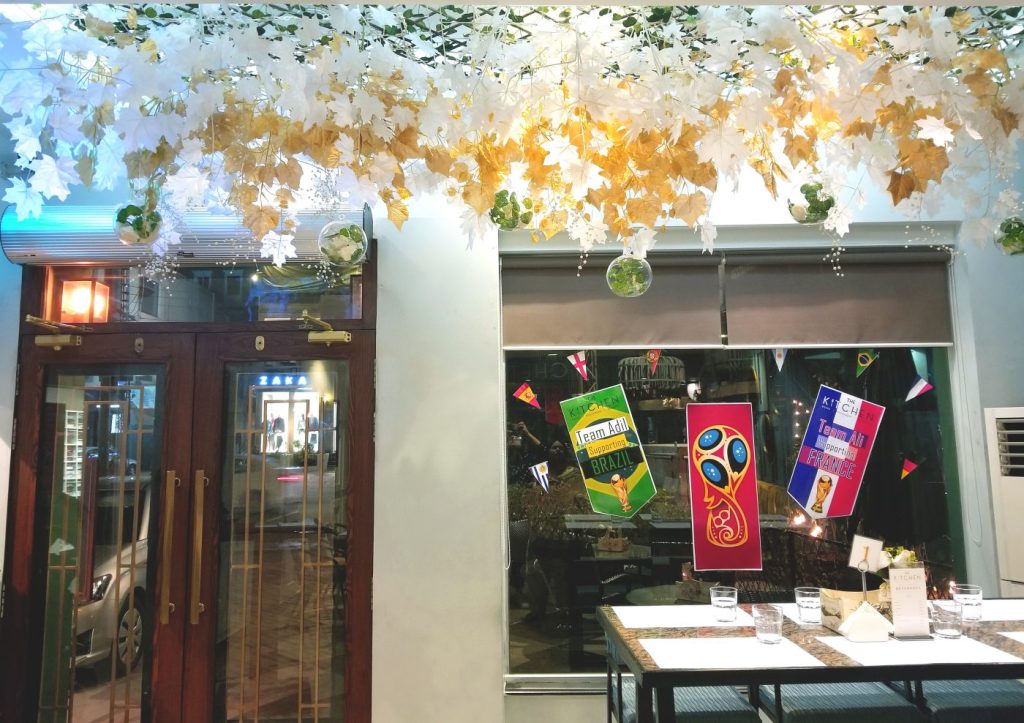 I visited The Kitchen on a Sunday night without a reservation. Cardinal sins in a city like Lahore. Much to the surprise of my company, we found a table. We were seated next to the bakery and desserts bar area, and my eyes were locked on the rows and rows of cakes behind the glass. We booked an individual-serving of the Snicker-doodle cake before we’d even gone over the menu; it looked THAT good. 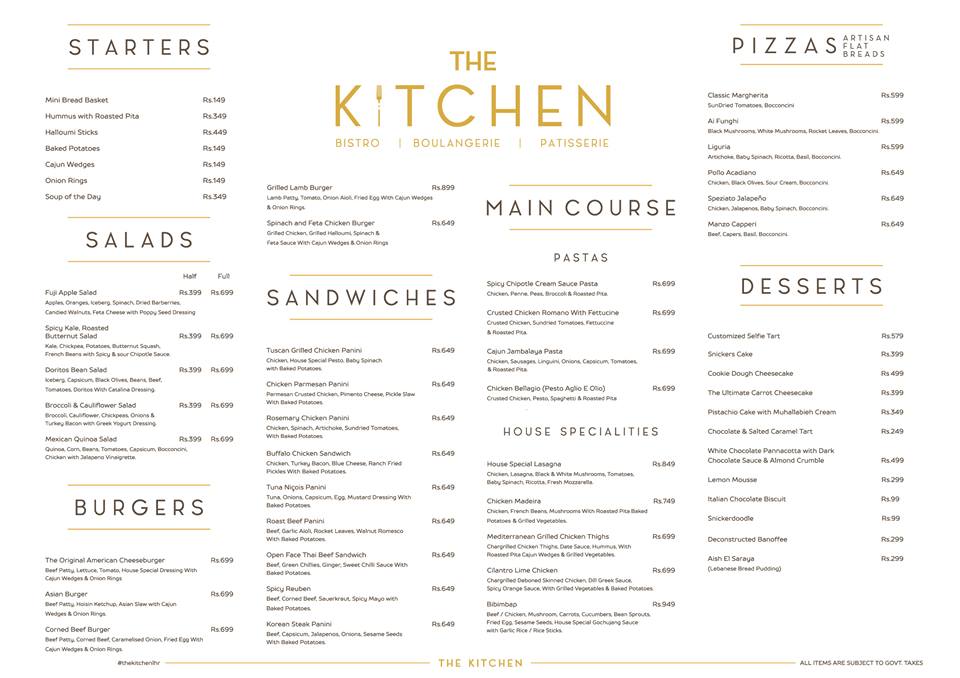 The menu was simple, printed on one side of a card paper that doubled as a table mat. Efficient. After prodding our waiter incessantly, we decided on an assorted bread basket and onion rings for starters; one Classic Margarita Pizza, Spinach and Feta Chicken Burger, Chicken Parmesan Panini, Mediterranean Chicken Thighs and Pesto Aglio E Olio for mains.

Some may think that’s a bit too much for a party of four, and they’re right: we were told that the servings were far more than adequate. Each of the chicken dishes had two of everything; the Panini was served with a bowl of baked baby potatoes and the burger, despite being a slider, had generous servings of potato wedges AND onion rings with it.

The bread basket was the first to arrive. See, the BOULANGERIE sign outside wasn’t just for kicks. The basket was full of freshly-baked Danish buns and garlic bread, with Lurpak containers. Dee-licious. 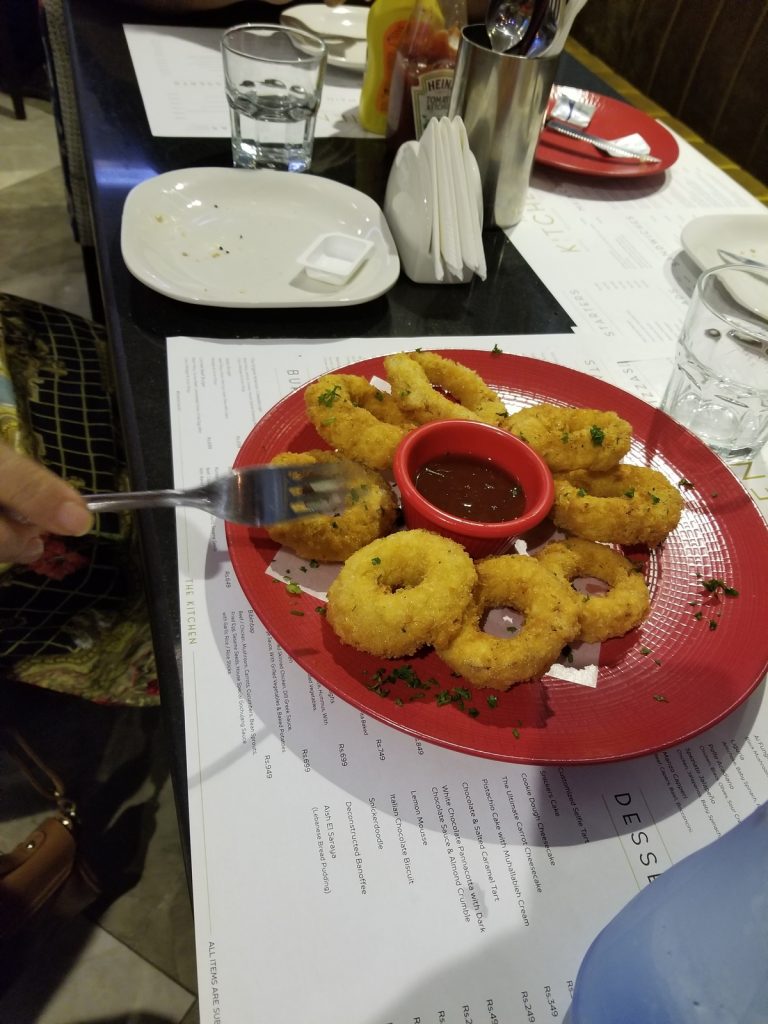 As for the onion rings, I’m just going to start with this: If Rina’s Kitchenette is my go-to for Mozzarella Sticks, I’m declaring The Kitchen my go-to for onion rings. I ate them with a fork and knife (I’m posh, deal with it). The coating clung onto the onion; I’m convinced it wouldn’t have separated had I threatened its family. Take notes, gentlemen. 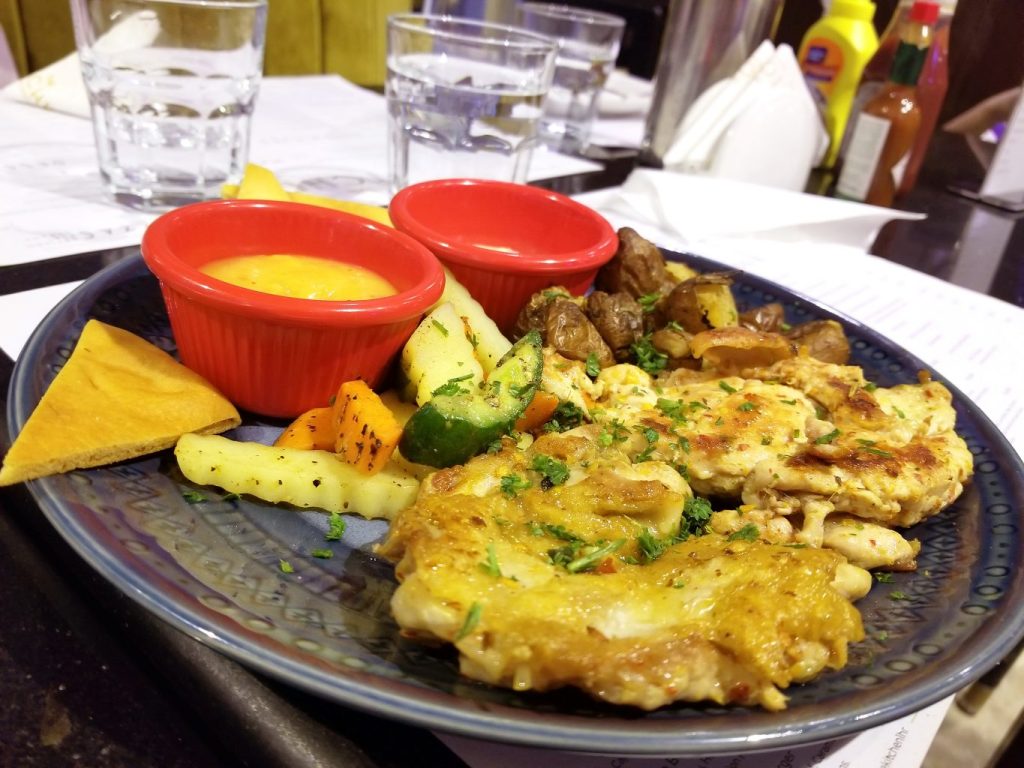 The mains were slightly deflating, however. Not for my company, just for me. I’m not a big fan of coriander, and I don’t really understand using such a strong-flavored herb for garnishing. Somehow, all of the dishes – save the Aglio E Olio – had chopped coriander sprinkled over them. Midway through my meal, I couldn’t help but think it had no other purpose but that it looked good. I could imagine a wide-eyed chota in the kitchen going to town with a bowl of chopped coriander (*cue* It’s Raining Men). 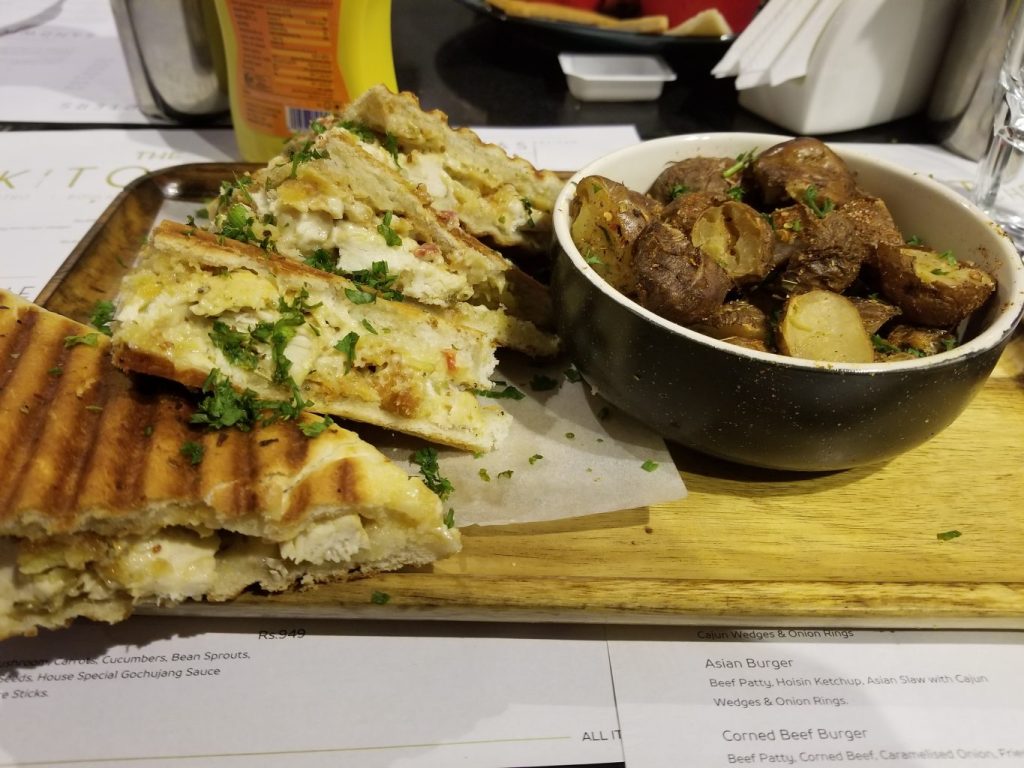 If I move past the coriander, I could comment on the parmesaniness (BOOM, just invented a new word) of the Panini. In that, it was loaded with Parmesan cheese. I could also go ahead and compliment the spice level of the baby baked potatoes (in that they were quite spicy). 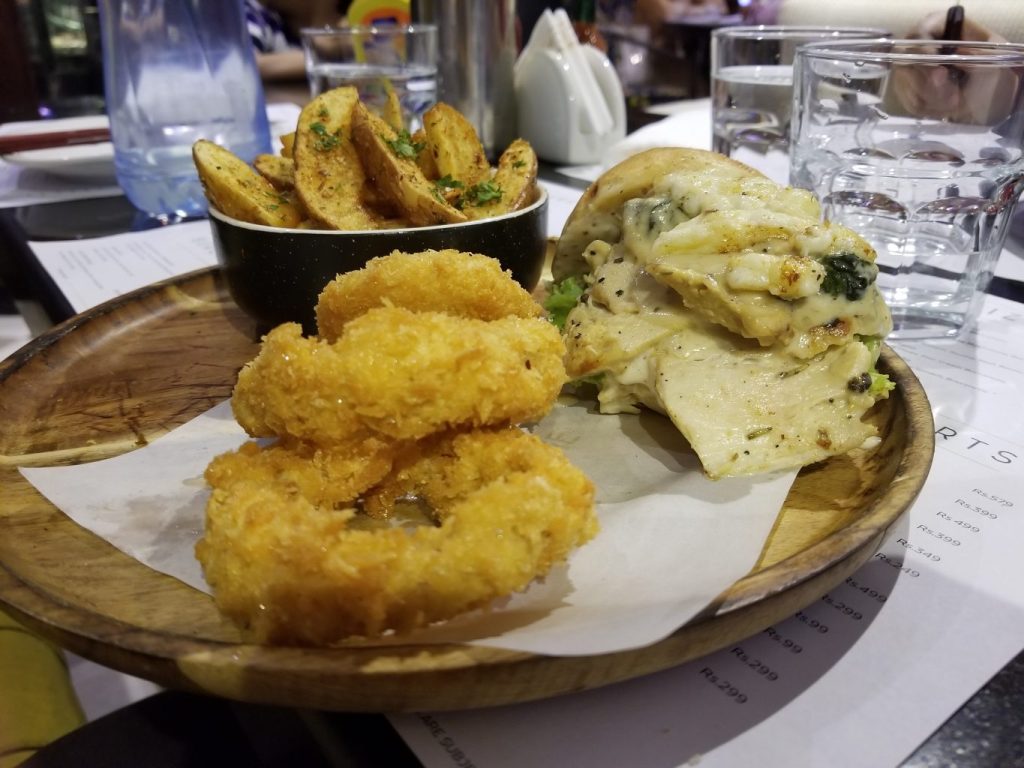 The burger was the entrée of the night. Hands down. Feta cheese, paired with a hearty spread of halloumi, balanced over a grilled chicken patty. The richness of these three items did not make the burger too overwhelming for my stomach. If there was one point it lacked in, it was the amount of spinach. Popeye would’ve been displeased.

The Classic Margarita Pizza received mixed reviews from my company. The crust was a bran flatbread and topped with spinach and sun-dried tomatoes. I quite liked it, but the person who ordered it didn’t. The staff, noticing his audible dismay, brought a complimentary basket of French fries. That soothed him instantly. 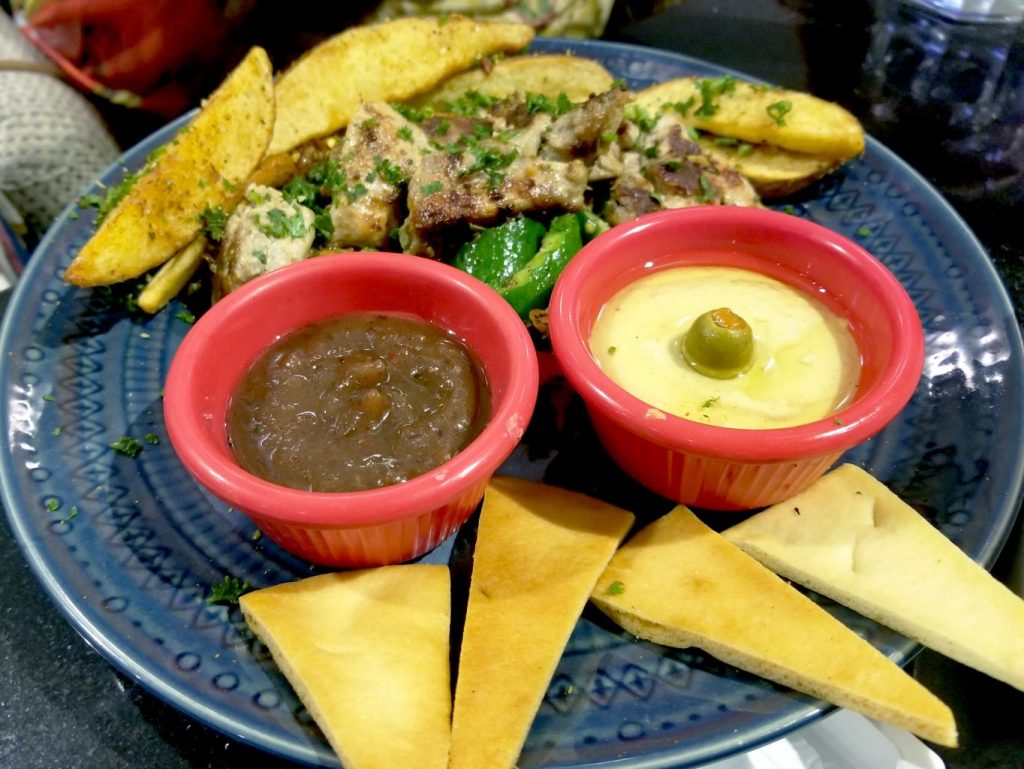 I don’t really like the taste of chicken thighs, as a rule, so it wouldn’t be fair to comment on them. They were served with crisp pita bread and hummus however, both of which I tried. The hummus was a tad too tangy for me and I figured that it had too much lemon juice in it. The thighs, however, were proclaimed juicy and flavorful. The person who ordered it wasn’t into spicy food, and said this dish worked for them.

The Aglio E Olio was really yummy. The chicken fillet accompanying it tasted suspiciously like the chicken in the Panini, but complemented the pesto. Thankfully, the chef refrained from the cheese overkill many neighboring establishments are guilty of and the pasta displayed simplicity. No one likes a show off. 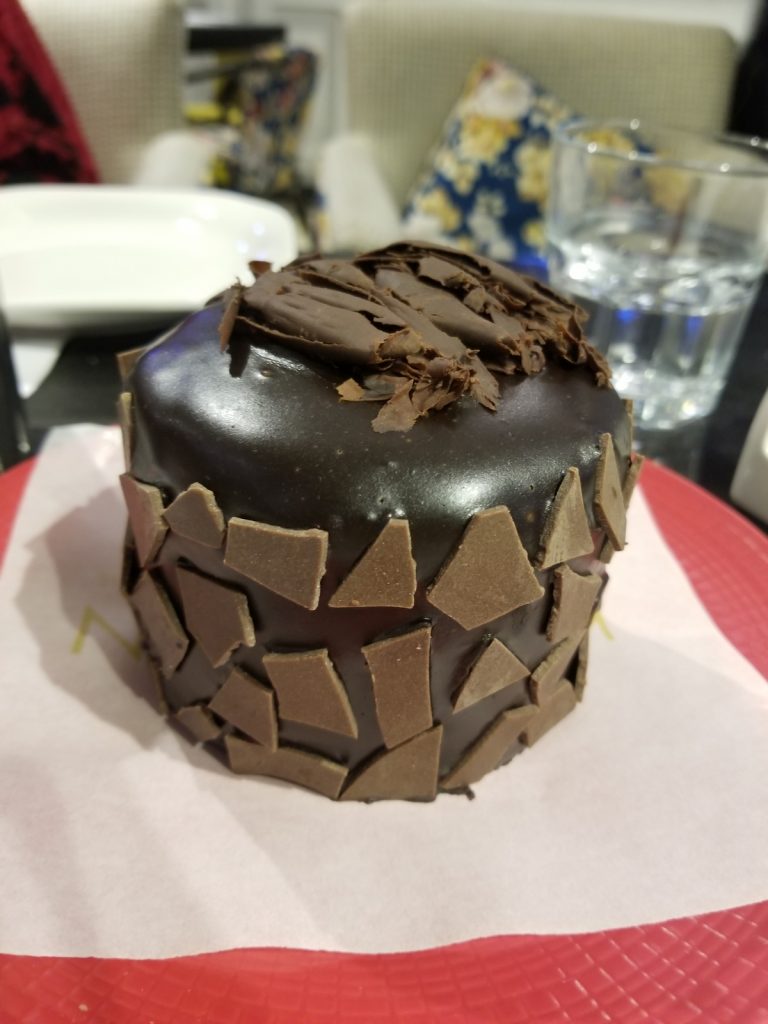 But I won’t forgive myself if I let this review slide without mentioning the Snicker-doodle Cake. First up, look at it, that shit is adorable. Secondly, if you love (with a capital ‘L’) Snickers then this cake is the answer to your subconscious prayers. It’s the dream of all dreams. The layered sponge is wondrously soft, and has two layers of entire Snickers bars within it. They sandwich a thick layer of cream and the whole thing is topped with chocolate. Patches of frozen chocolate are used for ‘doodling’ on the cake’s exterior.

After dinner, we were offered The Kitchen’s “selfieccinos”: digitally printed selfies of us on a frothing mug of coffee. While I can understand and respect their appeal for some, they didn’t really do anything for us. We passed on them and asked for the bill.

If you don’t mind coriander and want to escape the hubbub of Mall 1 or M M Alam, bring your date (or your mom) to The Kitchen, next time you’re in the area.