The Coke Fest 2019 Mess and the Future of Festivals

So Coke Fest 2019 happened last weekend. If you’re a resident of Lahore, chances are you’re pretty invested in the food scene. By extension, I’ll assume that you’re on the Facebook group ‘Foodies ‘R Us’. You are? Ok great, you’re used to drama.

Lots of assumptions going on here but one thing I know for sure is that Coke Fest 2019 was a hot mess – the trashcan fire equivalent of a food festival in fact. While food is usually the prime focus at such events, the spotlight appears to be on the management this time around.

It’s rare when members of Foodies ‘R Us complain about the management (lest they wanna get booted). This time around though, angry attendees made their displeasure crystal clear. Complaints regarding Coke Fest 2019 ranged from the usual, disorderly queues and waste management, to the bizarre: disorderly guards and handsy boys. The no stag policy failed, as usual. Trash bins were ignored like the youngest cousin in a joint family system. Guards threw punches like confetti. Attendees claim that everything from sexual harassment to public intoxication was fair game this Coke Fest.

Festivals, like most public events, have always had their fair share of troubles. But Coke Fest 2019 descended into a Lord of the Flies disaster zone within hours of opening its gates. The management has been dragged to the end of the world by Facebook posts and comments, and its quieter than a mime with laryngitis up in this b*tch. Members who came to Asad Sheikh’s defense were shut down quicker than an introvert at a speed dating convention. This begs the question, what the hell happened?

Beats me – I just want in on the party. And a party it is:

Some called out the event

Others were quick to defend the management 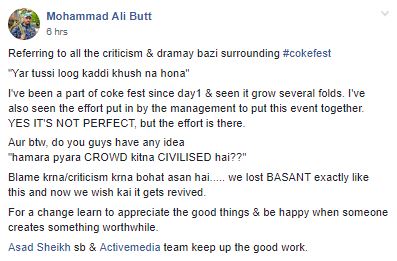 Single men had their own set of complaints 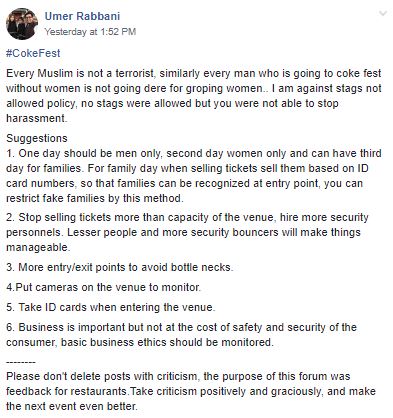 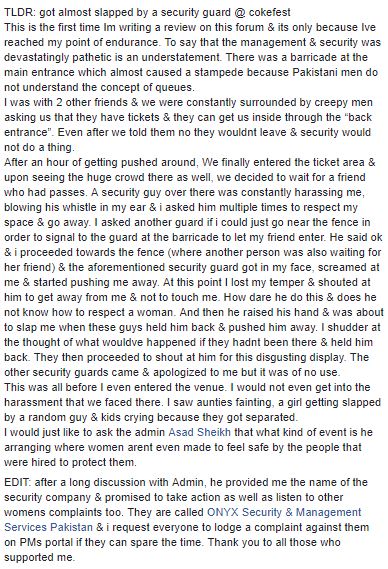 Truth be told, we’ve had some good times at previous Coke Fests. The magnitude of the event is absolutely jaw-dropping, and despite our past qualms about food festivals not innovating. Food is something Lahore knows well, and it’s a shame that a few rotten eggs are hogging the limelight. Our suggestion? Face the music, apologize, and plan better.

While we’re on the subject of food festivals, it’s pertinent to point out that there’s a brand new festival coming to Lahore. 7UP Foodies Festival is scheduled for April 5th. With Coke Fest 2019 leaving such a bitter taste in everyone’s mouth, I’d expect the turnout to be slightly impacted. This could also be seen as a positive because with less awaam to cater to, as well as massively adjusted expectations, 7UP Food Festival might just take off in a big way. It’s good to be optimistic I guess.