I know someone who claims to be a food connoisseur. He travels around Lahore scouting eateries and finds the ‘best’ restaurant in each category. Just last week, he told me about Taj Mahal Sweets, behind Lahore Fort. I was informed that they serve morning breakfast with halwa and puri, so I left for the Walled City at about 7 AM on a Saturday morning. 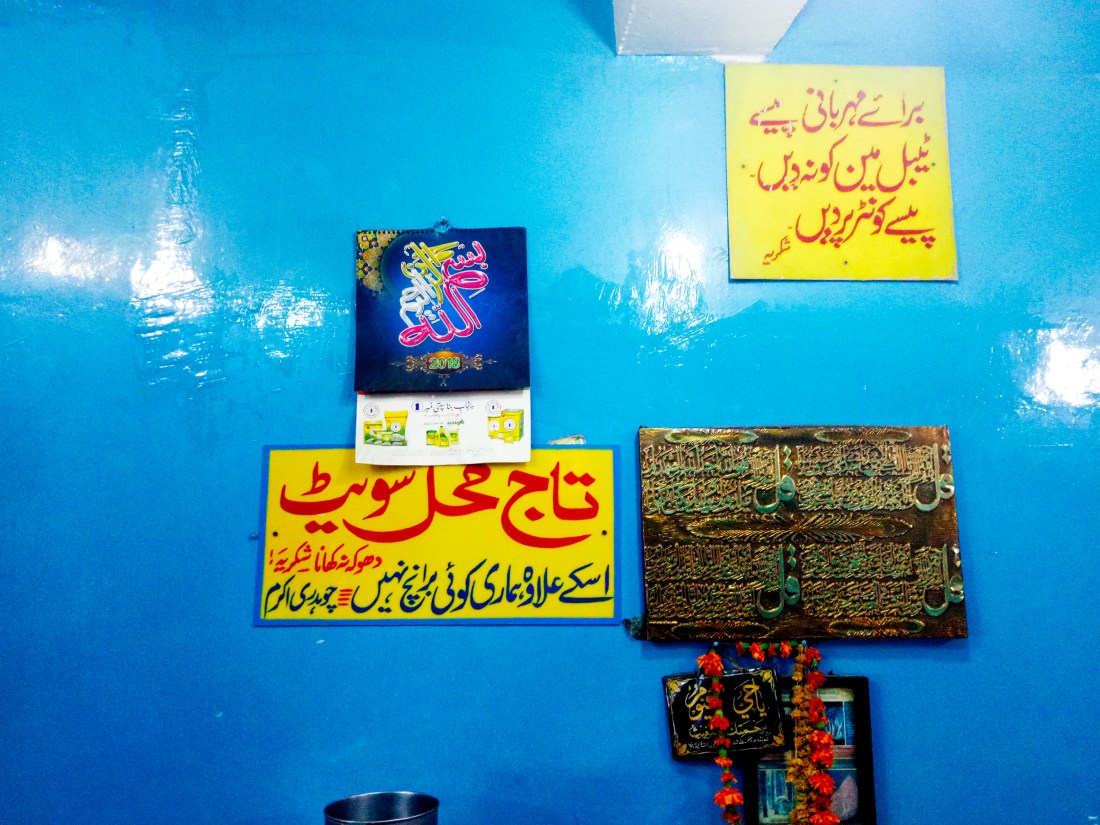 Taj Mahal Sweets is a small and rather traditional café close to Fort Road in Shahi Mohallah Street. At the front, they had a handful of huge-sauté-pan-shaped containers in which simple halwa (semolina), khoya badam halwa, meetha pura, chicken tikki, and qeema tikki were placed. Also, one of the cooks threw circular kneaded dough into a wok containing frying oil, which another man lifted up with a spatula after it turned crispy orange and swelled up. Behind the containers and the cooks attending to them, there was the counter where the founder of the establishment sat in a chair.

As I entered and sat on a glittering yellow rubber chair, I could feel the smoke rising from under the wok wafting into the sitting room. However, it was not unpleasant. It lent its own character to the traditional Lahori café. I ordered for myself a plate of halwa, two puris, and channay. The young waiter served them to me very quickly. 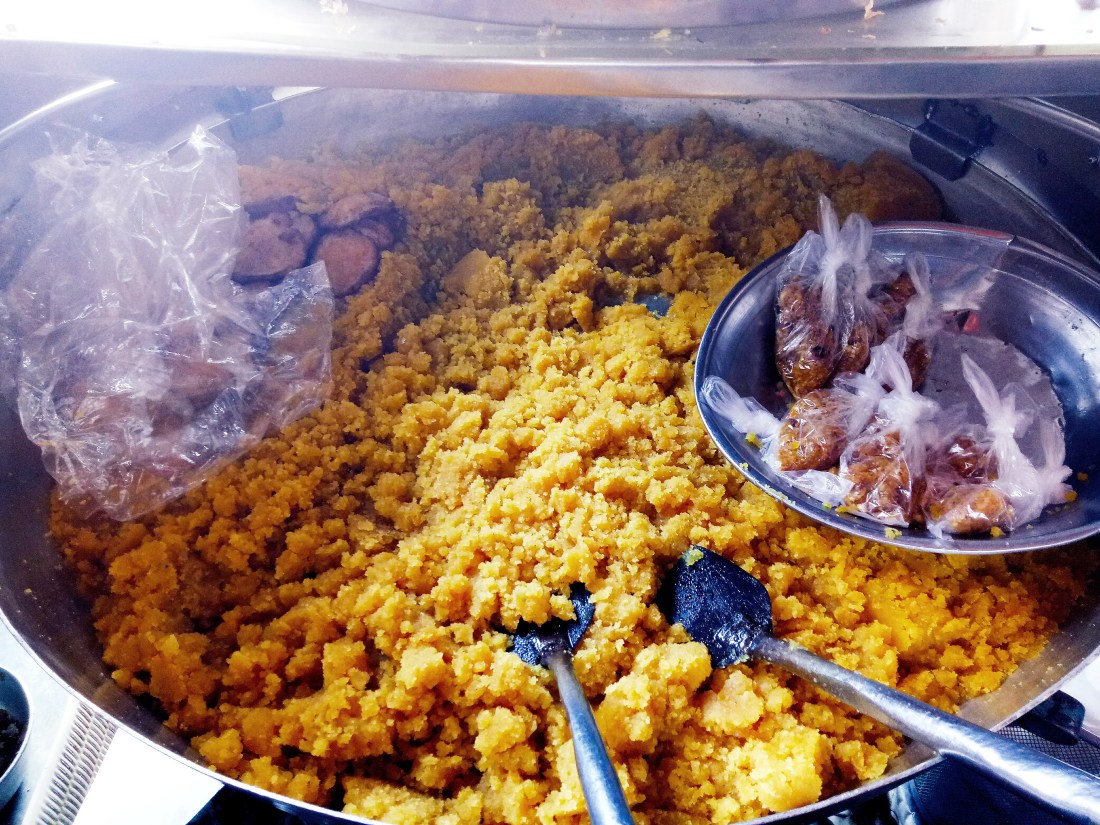 The crispy puri with steam coming out of it tasted exceptionally delicious when paired with the channay. To make things awkward for myself and to fuse different flavors together, I started eating morsels of puri with channay and halwa together. Additionally, I took little strands of the onions that they had placed in a channay plate and savored the weird combination of sweet and savory flavors together.  After that, I ate few bites from a small plate of sweet pura/boora, which was too delicious for me to comprehend. I thanked my friend later for recommending this humble but fine place for a traditional Lahori breakfast. 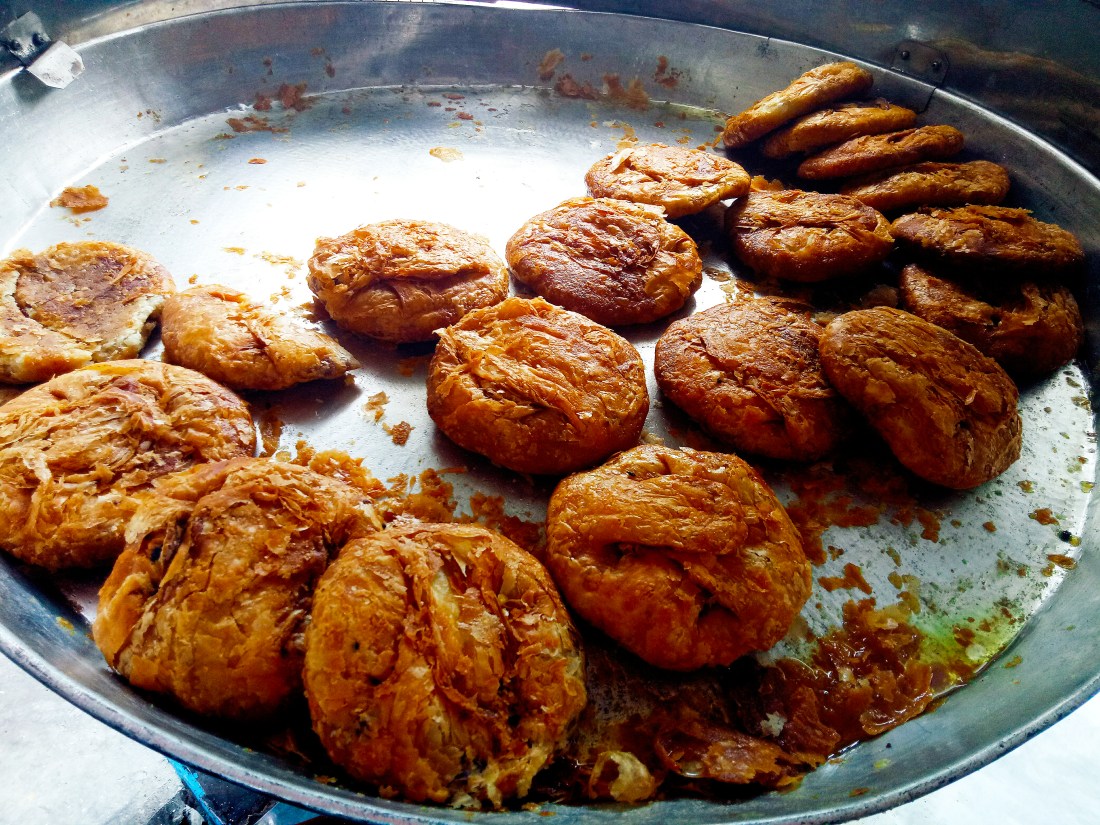 Taj Mahal Sweets use disposable plates for serving their foods, which speaks of their concern for hygiene, especially compared to other food restaurants in the neighborhood. In the shop, there were several portraits of saints, which had wreaths of yellow flowers around them. After having finished my breakfast, I talked to the founder of the place Muhammad Akram. I asked him about the origins of his business and his personal experiences.

He told me, “I entered the business at the young age of ten. For several years, I worked under the guidance of a teacher as a cook and learned to prepare different foods, as well as mastered recipes. After that, at the age of eighteen, I opened Taj Mahal in this same shop and started offering these foods. It has been fifty years since I started it. Now I am seventy years old and I still enjoy the work I started long ago. Among my foods, I introduced the recipes for sweet pura/boora myself. No one else in Lahore makes it quite like I do.”’