The Mysterious Streets of Gawalmandi

On certain days, when your whole life turns into a shameless question laughing in your face – no matter how small the question might appear to others – you wish instinctively to escape to a strange, foreign world. On such an afternoon, when the sun was shining down its scorching rays, I reached Gawalmandi, a heavily populated area in Old Lahore.

Gawalmandi (Gawala means Milkman and Mandi means Market) is a famous town as it is considered a twin of the Walled City. Of late, it has turned into a residential community. The mohalla (neighborhood) finds its earliest roots in 1911 though. For the longest time, Gawalmandi was the only developed area outside of the Walled City within Lahore.

Much like other areas in the Walled City, Gawalmandi is equal parts soaked in history and bustling with modernism. The writer walks through its commercial and residential streets, making observations as he does so. He links these with Lahore’s narrative and the significance of this area in the larger scheme of town planning. 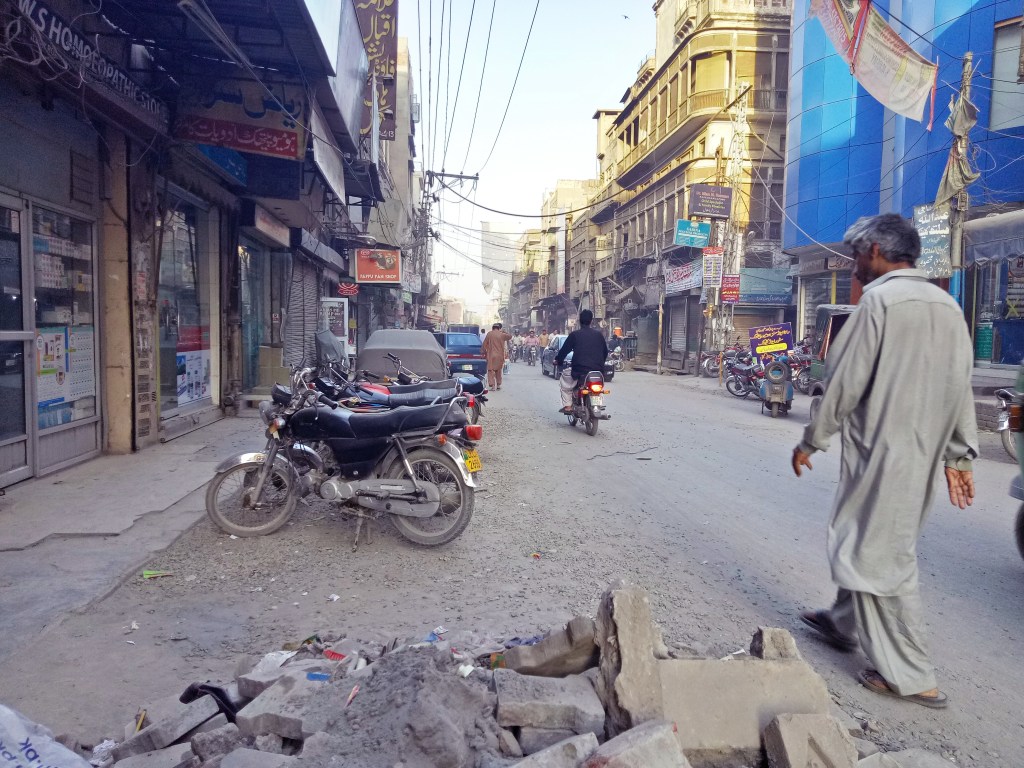 Walking on the road, and turning again and again under the shady spaces of shop shutters, I remembered the words of a friend from Gilgit. He mocks me every summer on call from his cold mountainous home, ‘Batao Bhae! Tandoor me kia chal raha hai? (Tell, my friend! What’s happening in your oven (Lahore) these days?

As I walked across the streets and rambled into unknown paths, I could see that they had ripped open every crude road in the locality and planned to renovate it with a metallic floor in anticipation of elections. Miracle! The huge banners, hanging between the ramshackle buildings amid the cluster of electric wires suggested whose area it might be in terms of voters.

In 2011, the PML-N majority Punjab government closed down this food street because it resulted in blocked roads and disrupted traffic. However, in 2013, then Chief Minister Najam Sethi ordered the reopening of the food street for tourists and local visitors, so that the food culture of the locality might be preserved.

Most of the main streets in Gawalmandi were pitifully crowded and narrow as there were people everywhere sitting before shops on plastic chairs and celebrated the lethargic afternoons with idle talking. Fruit carts floated among the general traffic of bikes, rickshaws, and motorcars with their pure fragrances. The stock characters of a congested Lahori street – rickshaw drivers, idle pedestrians, workers hurrying about, young students, and Jahaz (aeroplanes; alias for junkies) – were present there. There were also a few horse and donkey carts, which were loaded extravagantly, and the helpless animals could not speak our national and regional languages to complain about human behavior.

Also, I came across a police van, where one or two officers were dozing off, while the rest swiped awkwardly on their android phones and looked about now and then. The majestic building of Dyal Singh Public Library on Nisbat Road appealed to me but I could not make my mind to go inside and explore it. A little ahead, there was a white goat tied in the raised-up place between the two roads running abreast. I walked up towards the animal – clearly harassed by traffic – and took an unpermitted picture of him.

Further down the same Nisbat Road, I witnessed an old lady sitting in the little gallery, one that bulged out of a discolored red-brick building. 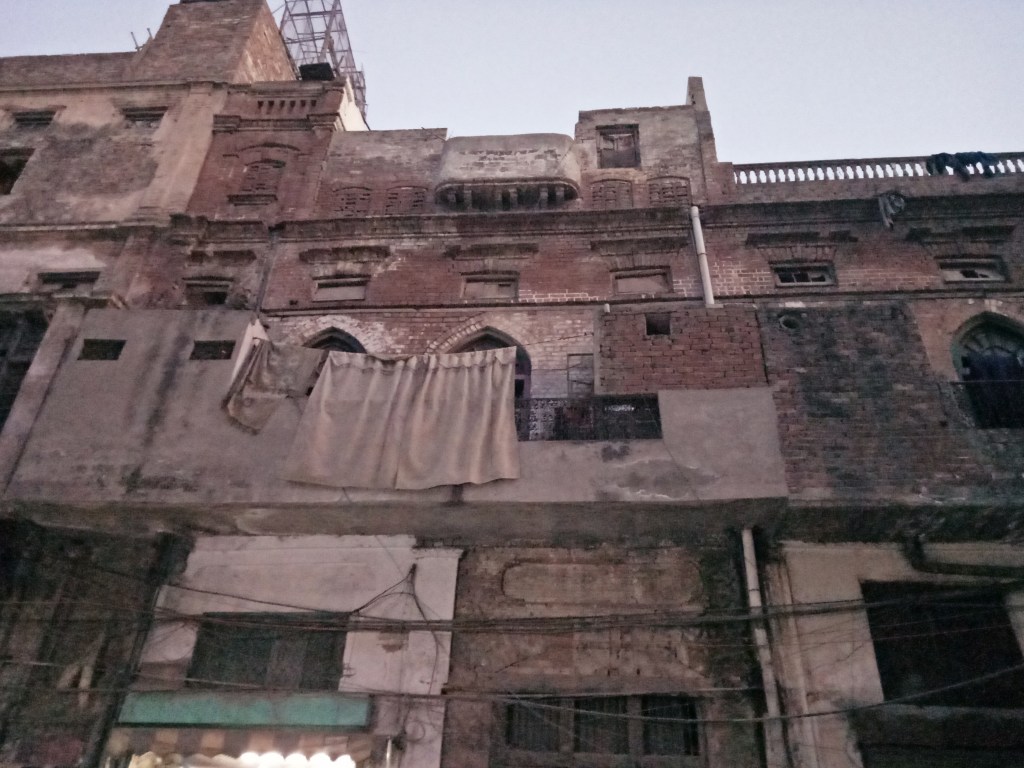 Then, I turned into the minor streets and alleys within the area as I could already see the evening shades looming down with its invisible sleepy potions. I loitered along a dirty water trench, which poured forth its horrible odor into the beautiful grey-red evening. With the moves of a knight on a chessboard, I wandered among the sinister streets, which were woven with old and decaying buildings together into impossible clusters of homes, impossible anywhere else in the world. I remembered how as a child, I used to wander in the village streets in the morning and wished I might get lost for a while, so that my father would not send me to school, but it never worked as I ended up always in the backyard of some distant second-cousin, who escorted me to school without pity. While traversing one of the alleys, I noticed in front of few shops four old friends with grey hair and bald heads playing cards. I stood there for a while and observed them throwing cards on the top of each other with villainous indifference as if some mysterious plot was being concocted in one of those dark and convoluted alleys. In another street, two brothers were playing cricket and a few women were watching TV in their house as I accidentally spied at them through the open door. A little girl holding the hand of her tiny sister saw me taking pictures of an old carpenter shop and asked why I was taking these pictures. I asked her if she wants to be photographed. She smiled and said “no”.

In another street, there was a little snooker room, where three young boys were playing the game with unusual seriousness. I stood beside the old man sitting outside the door to observe the game. While moving about, as the evening blanket was spread uniformly from above, I ended up in a market-like space between the towering buildings, where the number of women seemed to have increased. The reason was that there were various women’s clothing shops here. The catch was, that they were all run by men. The minimal space left between the little and large shops was filled with traffic and exhibited a certain sense of jubilation. I saw an old man dyeing a blue dupatta in a huge plate, which was on fire. Walking there for more than an hour, I realized that I had mixed up completely with the essence of the place. I had started enjoying loitering around without critically looking at the pathological makeup of the buildings and fatal electric wires hanging everywhere, like human misery slipping out through windows.

Around 7 PM, I ended up back in the food-street of Gawalmandi. The waiters and food-stall owners were waiting listlessly for their customers. I saw only one or two families getting done with their untimely dinner.

Besides the restaurant, there was a shop, which was filled to the top with bric-a-brac and had an old bearded man sleeping in the middle of it. Although taking pictures of old men in their sleep is considered a bad omen in my village, I could not resist the temptation. My old mother thinks that a picture might take away the sleeping man’s soul along with it. In his shop, there were broken fans, old shreds, papers, tire rims, wires, and a number of other little objects.

Although I had walked around the place sufficiently and observed it to my heart’s content, I did not want to return to my room and, therefore, kept wandering about in the streets dimly lit with yellow bulbs as if walking could unburden me of my shadows. I would not mind claiming, however, that walking in a new and never-before-visited locality happens to be therapeutic. When I started back, I felt relieved in a peculiar way: even though Gawalmandi was hardly in a good shape, there was a magic to it. Yes, there was a magic to it indeed.