The article has been contributed by Hafsa Khawaja, a member of the Shehri Pakistan team

In early 2017, Arafat Mazhar was struck by a particular question: what makes human rights-based advocacy so ineffective in Pakistan? He reached the conclusion that many, if not all, such initiatives rely too heavily on a framework of human rights and an associated vocabulary that is not internalized, understood or readily accepted by the vast majority of people in Pakistan. The public is an ideal target of the emancipatory potential of such discourse however, they remained incapable of accessing it. Something as foundational as the constitution did not have an adequate local learning resource. It was then that he and a few other people decided to produce an animation to explain the constitution with an indigenous setting and characters. The purpose was to highlight the notion that knowledge of the constitution can inform people of their rights and can help safeguard those rights.

And so began Shehri Pakistan in April 2017. 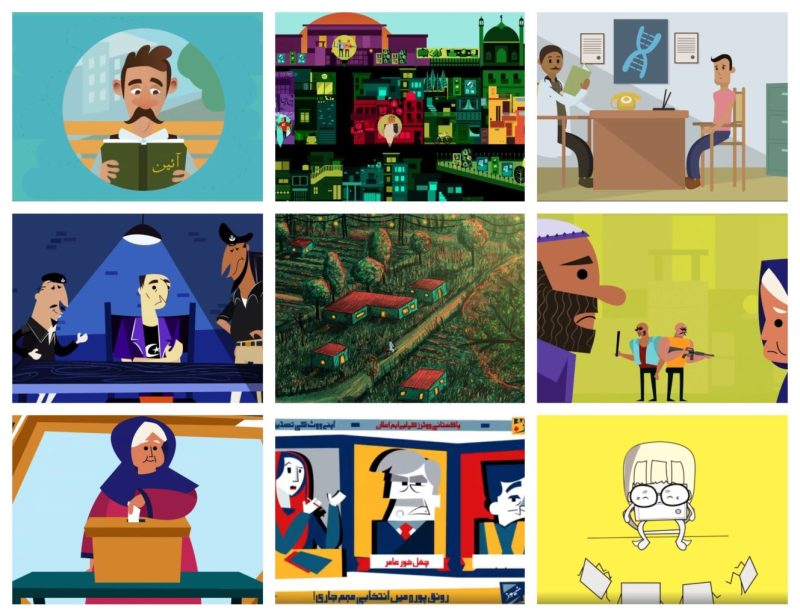 What is Shehri Pakistan?

Shehri Pakistan is an organization geared towards imparting accessible civic education and constitutional and legal literacy through online animations in Urdu and other regional languages. It seeks to untangle democracy, governance, and bureaucracy for the common man and to promote comprehension of an individual’s central relationship with the state under a democratic system; that of citizenship. In the same spirit, it is dedicated to cultivating the ideal of an informed, active, participatory and responsible practice of citizenship in the country.

Subsequently, Shehri Pakistan has organized extensive campaigns featuring informative and entertaining animations and posters on several fundamental rights, on the different tiers of governance and principles of democracy, and on responsibilities of the state and citizens. Ranging from Passing of the Law; Workers Rights; How to Exercise Your Right to Information; Your Right to Due Process and Fair Trial; How to Vote; What is the Constitution; Right to Clean Water; Tertiary Care Hospital Guidelines and many more. Keeping abreast of national developments and events, they also produced, in the lead up to the recent elections, a string of videos offering explanations of different electoral and government-formation processes, structures and institutions. More recently, they rolled out their latest video on How to File an FIR. Apart from these animations, Shehri Aaj is another feature which is essentially a series of informational and critical videos that delve into issues and subjects of civic education, democracy, governance, and social problems, linking the information presented in Shehri animations to persisting problems and concerns in local communities. So far, more than 70 videos have been created as part of Shehri Aaj, some of which pertain to Transgender People and their Voting Rights; Low Voter Turnout; Animal Rights; Mental Health; Acts of Election Violence; Rights of an Arrestee; Appropriate Police Behavior; and Traffic Rules. They’ve been able to garner over 19 million views, with the most popular videos relating to the Rights of Domestic Workers; Treatment of Police with Citizens, and Problems Faced by Coal Miners.

Moreover, Shehri Helpdesk, an initiative run through Facebook, has responded to hundreds of queries on public and legal concerns. On top of this, Shehri Pakistan’s outreach program continues to organize regular sessions on civic and citizenship education in various public and private schools in Lahore.

In a little over a year, Shehri Pakistan has established a robust digital presence on its Facebook page and amassed nearly a million followers, while disseminating its content to 42 districts, with a total poster reach of 15 million, engagement of 8 million, and a video reach of 50 million. 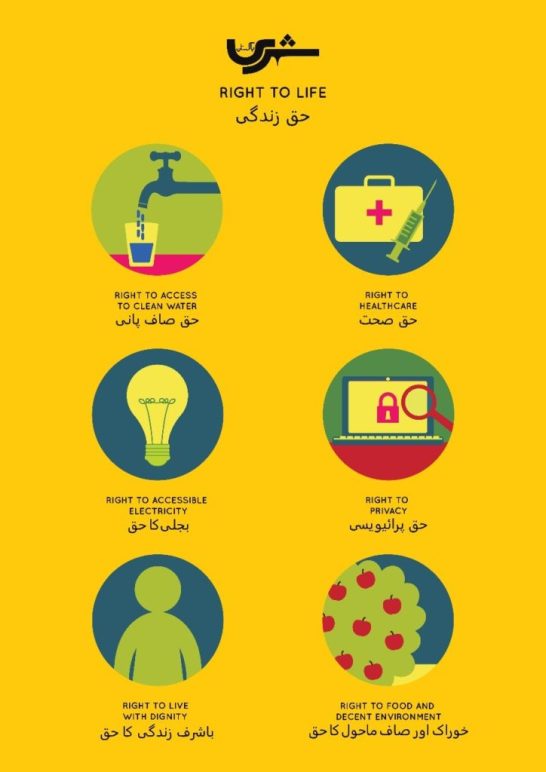 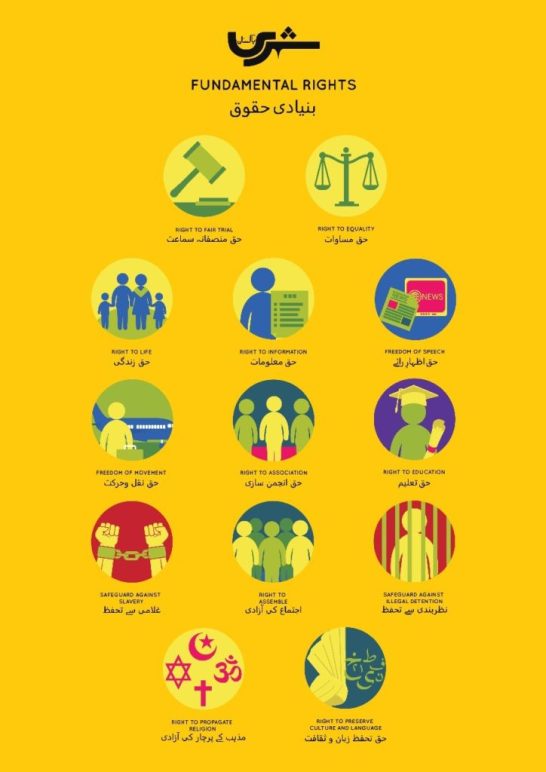 Arafat Mazhar, founder and director of Shehri Pakistan, explains the idea behind Shehri Pakistan candidly. In his words, when a vast majority of your population is unable to access the relevant vocabulary, discourse, historical framework, and sociocultural context to comprehend the fundamentals of human rights and democracy, it becomes pointless to discuss these systems. In order to further these, it is necessary to educate the people in a way that is palatable for them. These concepts and ideas exist on paper but not in actual comprehension and currency among people.

Shehri Pakistan is a unique initiative not only because it engages with a demographic which is usually excluded from human rights discourses, i.e. the vast majority of Pakistanis who consume information in Urdu and consequently finds the constitution, democracy, and principles of human rights alien, but also because Shehri presents this complex often inaccessible information in simple Urdu using local motifs, visuals, characters, and situations.

Similarly, there is a lack of emphasis on citizenship in Pakistan that the organization seeks to redress. “Shehriat, for the majority of the population in Pakistan, mainly pertains to the fact, experience and reality of living in the country, not the values embedded in the concept, such as equality of citizenship or rights and responsibilities,” says Fatima Anwar, a lawyer at Shehri Pakistan.

The role of Shehri Pakistan is then designed to rebuild the discourse and idea of shehriat as both a set of concrete values and a crucial practice; to locate the place of the citizen within a democratic structure of governance and model of life.

There are still, however, distinctions to be made and lines to be drawn for the organization. “We don’t do advocacy since our aim is education. Our video on the Separation of Powers, for example, is not directed towards any activist goal but simply an awareness of how the state works, or should ideally work,” adds Arafat. Shehri Pakistan is deeply committed to familiarizing citizens with the existing system of governance and the workings of the state that large swathes of the population otherwise see as an alien or complicated sphere that they lie outside of. Engendering a sense of integration and familiarity with the system could inevitably push people to participate in it, appeal to it, and hold it accountable. “We hope that the Pakistani public will eagerly engage with and use our educational resources. And it is heartening to know that it does happen. Recently, we received a message on our page from a follower who narrated how he adamantly refuses to pay bribes to the traffic police since he now knows the actual process of depositing the challan courtesy our animation on Traffic Rules,” expresses Rasti Farooq, Campaign Design Officer. 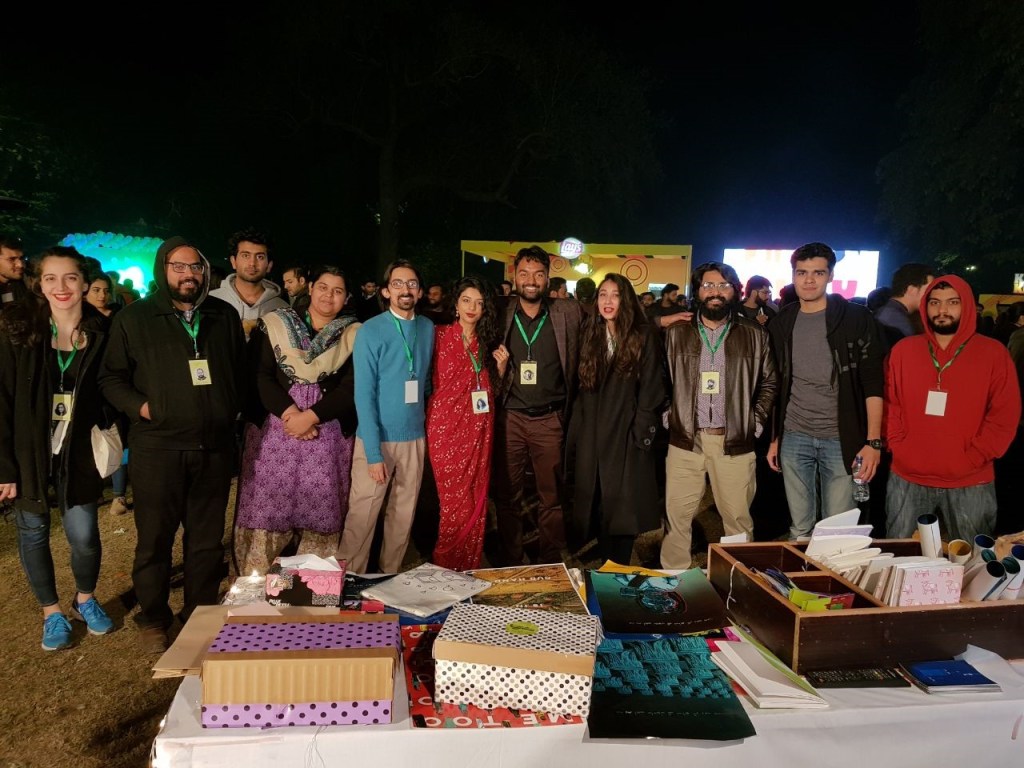 Shehri Pakistan originally started as a team of five people but currently comprises a team which numbers no more than twenty people. The team includes individuals from vastly different backgrounds who have crafted the interdisciplinary nature of its unique approach; combining research, design, and technology in order to provide accessible civic education using indigenous iconography and local paradigms. From lawyers, political researchers, designers, animators, and artists to even musicians and actors, the team is integrated in its commitment to Shehri’s values and objectives but it is incredibly diverse when it comes to individual interests, disciplines and skill sets. (Fun facts: one team member was part of the band that won this year’s Pepsi Battle of the Bands; another team member is an actor who is part of the local theater circuit.) 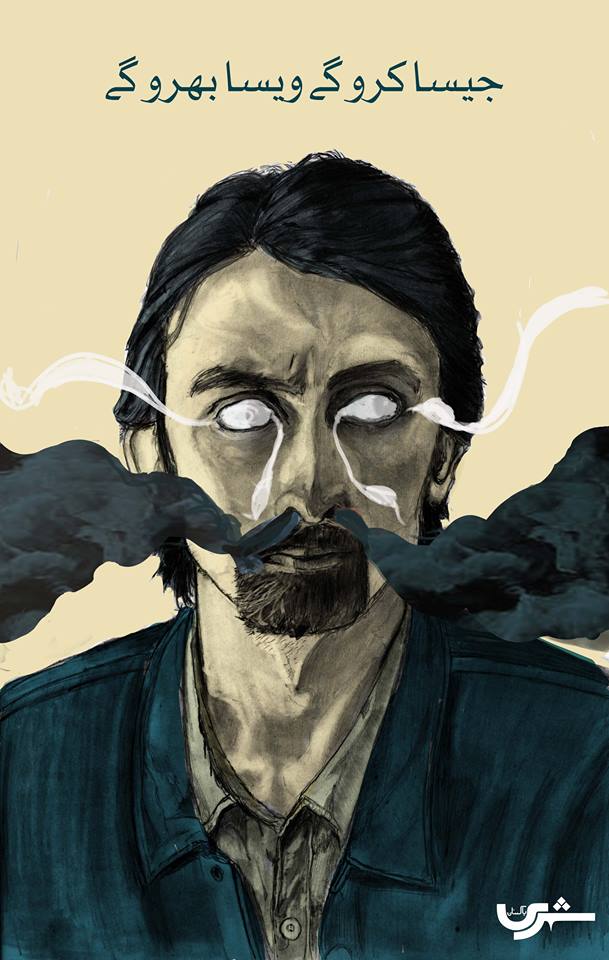 Shehri Pakistan has forged multiple collaborations with numerous organizations on various issues. This has included partnering with Facebook in the latter’s campaign against fake news and to prevent the spread of false news and information by disseminating localized tips for improved news and digital literacy among Pakistani Facebook users; partnering with the Chief Minister Punjab’s Special Monitoring Unit on the subject of healthcare and the rights and responsibilities of patients; working with Bolo Bhi on the Right to Information; with the Child Protection Bureau on a series of posters on child abuse awareness for parents, teachers and children; and with the National Commission on Human Rights over a series of animations based on fundamental rights. In addition to organizations like Rabtt using Shehri Pakistan’s material in their programs, the circulation of its content has been helped by the interest shown in it by official accounts of the Government of Pakistan on Facebook, Twitter and Instagram, which specifically shared the videos from the organization’s election-season campaign.

For the immediate future, Shehri Pakistan has planned a host of programs and projects ordered around the singular goal of branching out from their prominent digital presence to a presence on the ground. A major new project is Shehri Pakistan’s own legal aid clinic called Shehri Wakeel. The project is already operational in Lahore and provides free or low-cost needs-based legal services such as filing bails, litigating cases, and drafting legal documentation. “We realized the need for substantial, on-ground legal aid when Shehri’s followers started messaging us about their personal legal troubles. For example, we had run a long online campaign on labor rights in Pakistan after which we received a host of messages from working-class citizens whose basic rights were being violated on a daily basis. It was not enough to tell them the law was on their side, they simply could not afford lawyers and lived with the threat of losing their source of income if they pursued legal action. At first, we tried to refer them to other organizations only to realize the dearth of legal aid options available to citizens in dire need. We decided we wanted to fill this gap ourselves–it was a logical extension of the legal literacy work we were already doing online,” Fatima explains.

Furthermore, Shehri Pakistan’s pipeline contains animated short films, the provision of civic education in madrassas, a comprehensive civic education textbook, and the development of an educational and informative mobile app for adults, young adults, and children. This app will contain all of Shehri Pakistan’s content as well as role-playing games for perspective building, Shehri Lughat, a 24/7 legal helpline, and a virtual parliament in which users can debate legislation as members of parliament.

As Shehri Pakistan drives forward with its outreach, collaborations and an array of new projects and plans, it remains resolutely animated and steered by the simple but significant idea which forms its motto: