Before eulogizing Savour Foods, the humble beginnings of this food chain need to be reiterated. Haji Muhammad Naeem, the current Savour Foods owner, initiated his food business in 1988 with a small shop close to Gordon College, Rawalpindi. Within no time, this small takeaway spot became a functioning restaurant with about twenty chairs for visitors wanting to taste its special pulao (rice cooked in chicken stock). Over the coming decades, a slow and gradual path to success was paved as he opened several restaurants in Islamabad, Rawalpindi, and Lahore offering the same heavenly pulao. In these major cities, except Lahore where it is still quite new (though there’s a Savour Foods Lakshmi Chowk as well), the pulao is famous and universally appreciated; I dare say the pulao has the potential to become the most famous food of Pakistan. If you’re jonesing for a burger, this article is NOT for you.

When I was studying in a cadet college, my roommate from Islamabad used to mention the magic of Savour recipes in exaggerated tones. Years later, when I visited Savour Foods in Lahore, I found his claims were well-warranted. I visited their flagship Lahori joint with some friends in the afternoon and my appetite had reached the maximum available intensity at lunch time. Without wasting any time, we went straight through the wide hall filled with chairs and tables, and seated ourselves in a corner. I ordered a single chicken pulao with salaad (salad) and traditional raita (yogurt based sauce) – forget street food, I’m going all in!

We tried to distract ourselves from our impatient wait for the food by holding a loud, energetic conversation. I noticed that our voices had grown louder since the huge dining hall was full of noisy individuals all talking over one another to make their opinion count. A working man hosting a quiet business lunch here would be a nightmare, and I don’t recommend that for anyone. What you can do, though, is say outrageous things to one another without worrying about anyone eavesdropping and, consequently, judging you.

Soon, they brought the pulao on a plate along with the raita and salaad. If you ask for it, they’ll give you a shami kabab, but I’m not particularly big on shami kababs. While my friends talked and laughed, I served myself pulao and poured the fluid raita on top of it – perfect video material. Unlike the pulao cooked in the Northern parts of the country, where they use too many peppers and spices, Savor Foods keeps their spice level moderate in a wonderful, balanced way. With every spoon, I cut bits of the shami kebabs – meat patties resembling round biscuits – and layered it onto my bite of the pulao. The quadra-decker of pulao, raita, kebab and salaad (exactly in that order) became a luxurious meal; fit for a king. I could not hide my surprise upon finding out that this delicious pulao is offered at the low price of PKR 170 to every diner. 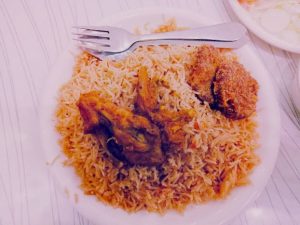 While I was in the final stages of this heavenly meal, my friends started that age-old and totally unoriginal argument regarding two staple Pakistani rice dishes: Pulao and Biryani. I kept listening to them until I was done eating, and then left them to order some Zarda – yellow, sweet rice with fruits and nuts – as dessert. My friends were still busy citing places in and around Lahore that served quality Pulao or Biryani as though these were historical or factual accuracies that helped their case in establishing the superiority of one over the other. It was clear that there would be no real conclusion to this conversation (ever) and so they proceeded to order more Pulao. I refused to eat another bite, and my friends’ divisive views were suddenly set aside so they could unanimously mock my small appetite. When they had stuffed themselves to their heart’s contentment, and my Zarda had also been devoured, I ventured a thought: it is not about Pulao or Biryani, but the rice itself – a superior ingredient – that simply makes everything better. Pulao, Biryani, Zarda and Kheer (rice cooked with milk and sugar) are different manifestations of rice; each has its unique flavor and fan base. My friends responded to my musings with jokes and lighthearted banter. 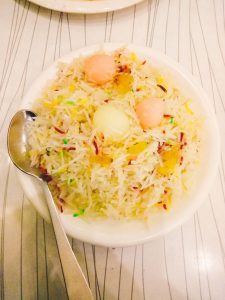 A quick note on the Zarda: it was the perfect end to the belated lunch. Each spoonful contained bits of cham cham (colorful, flavored flour balls soaked in sugar syrup) and raisins. As rice entrees tend to feel much lighter than anything served with bread, I came out of the hall satisfied and not hating my food choices. Savour also offers a variety of ice-creams and other desserts but I could not force myself to try them because my stomach was so full; a testament that this establishment is definitely worth a visit every few weeks or so.

At the time of writing this article, Savour Foods does home delivery in Lahore through Foodpanda.