Satisfaxion… with an ‘X’: Timeless

If you’re old enough, you might remember the golden days of ‘the Hotspot corner’ near Lalik Chowk, DHA: Teenage-boy-cat-fights, calls to violence that were almost never followed with action. The heyday of Jammin Java was also in this area – Jammin Java has, since then, faded into a cheap sort of oblivion, much like PTV (a foregone conclusion the second JJ decided to mainstream). So many first dates, awkward encounters and undergrad students pretending to be the cast of Friends (NBC) come to mind with JJ – but I digress. 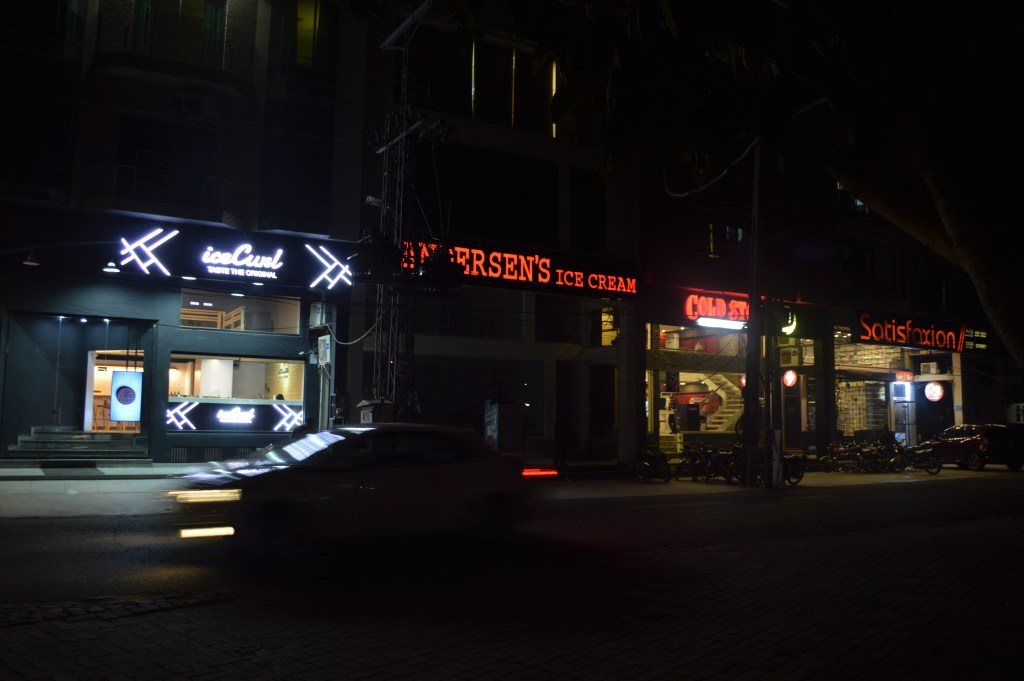 A car whizzes past one eatery after the other but leaves Satisfaxion unaffected.

I decided to pay tribute to nostalgia by visiting Satisfaxion, a DVD store in T Block, next to the Hotspot which I used to frequent in my younger days. 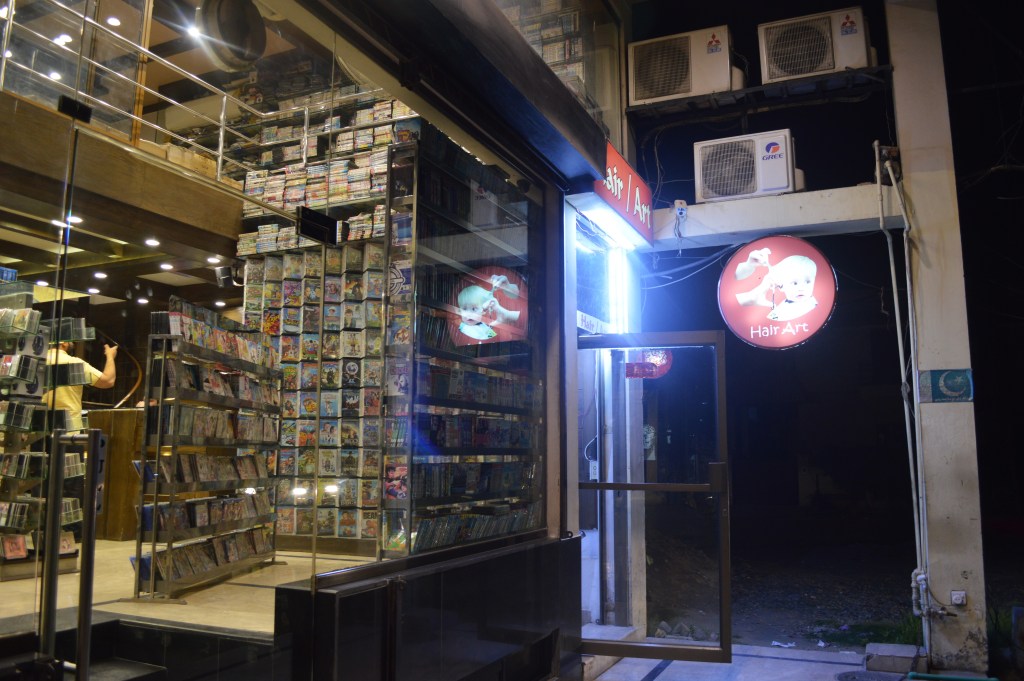 I walk up to the counter and ask the guy if it’s okay for me to write about the store for a website. Sajjad, a lackadaisical store employee who clearly wants nothing more than a zero-communication policy with customers, responds with something like a “sure, if you really want to,” in Urdu. I ask to speak with the owner of the store and explain that this is for a food and tourism website. Sajjad is not moved in the least. I tell Sajjad he’s right, I don’t have to write about the store, especially not if I have to deal with someone who has such a ‘cheetah attitude’. (“Barray cheetain hain aap,” I believe, are my exact words.)

I emphasize this exchange because the ‘cheetah attitude’ is a term that comes to mind when visiting this store – someone with a cheetah’s attitude, in Urdu slang, is someone too cool for the daily travails that the rest of us are bogged down by. Satisfaxion, the store itself, is kind of a cheetah in that way. It is a swanky DVD store in an expensive corner of DHA at a time when many of us have Netflix accounts, even to watch Pakistani dramas.

The next night, I show up again to speak to the owner, Haroon. By this time, I’ve explained a few times that I am not a LUMS student writing a paper on them, as they are so keen to believe. I am a features writer. For some reason, this doesn’t register. My questions are answered hesitantly – ’tis the desi quality of being cagey with financial information, I suppose. 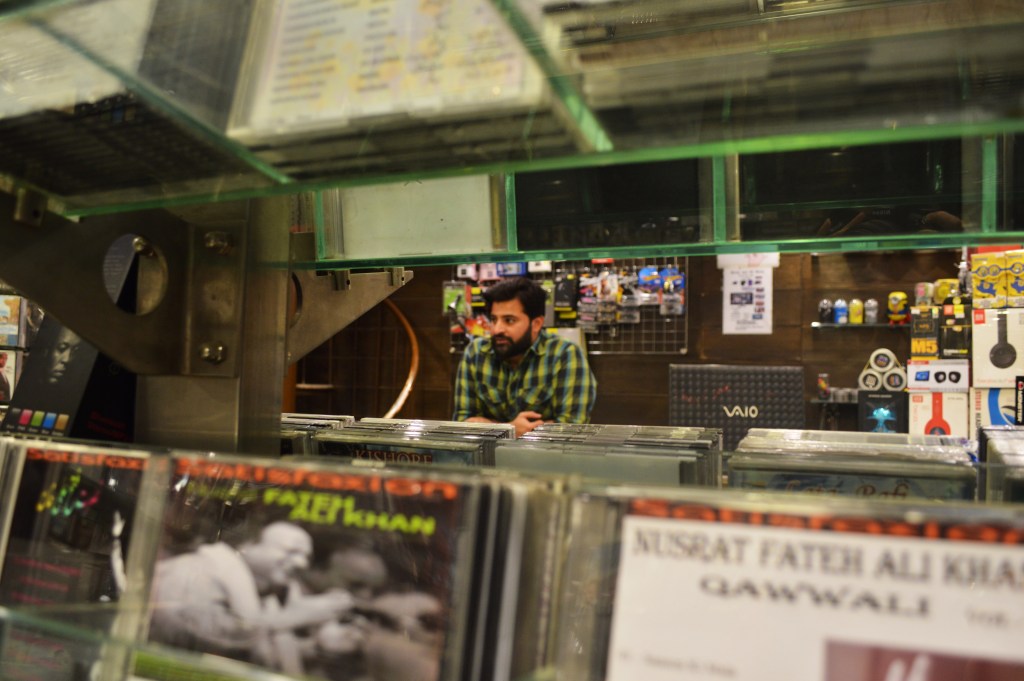 Haroon through the CD racks.

Haroon, to his credit, tells me that DVD sales have dropped forty-to-fifty percent in the last five years. He says this with a cheetay wala attitude. It suddenly feels disrespectful to ask him if he plans to keep the store running long-term. It is now up to me to figure out how the store keeps going, year in and year out. I spot accessories, flash drives and mobile covers on display. Satisfaxion started selling these items in the last four, five years, Haroon tells me. 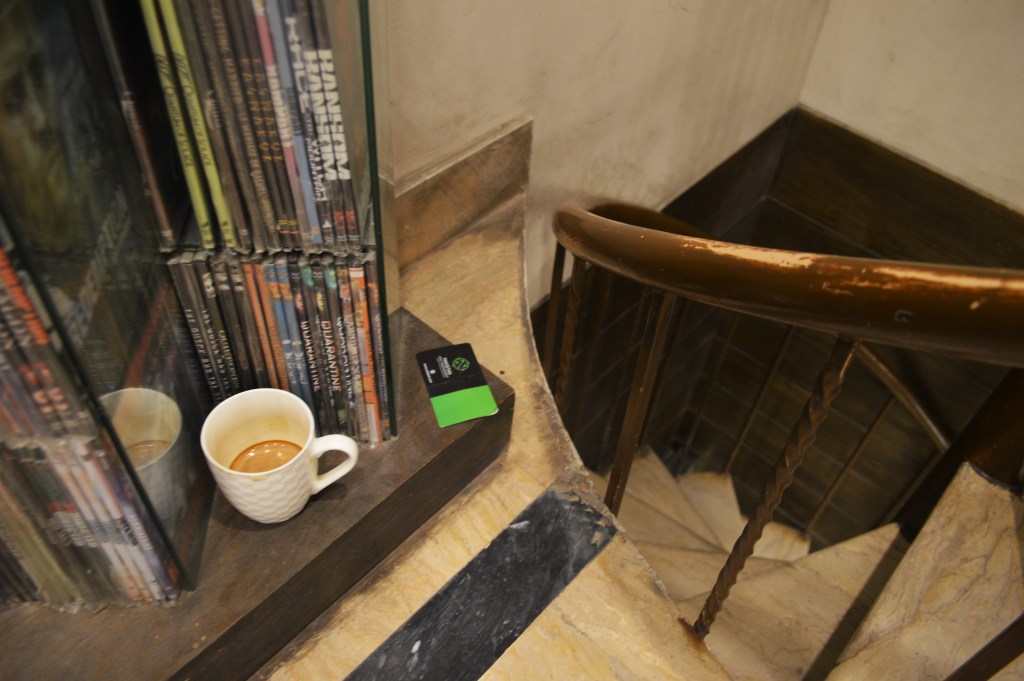 A discarded cup of tea on the upper floor.

People still buy DVDs, I’m told, just not as much as before. Half of the customers buy material transferred onto flash-drives, which is handy since Satisfaxion keeps a variety of flash-drives on display. Slow internet definitely contributes to Satisfaxion’s business.

Wading through the viscous swamp of a cheetay wala attitude, I try to find a living spark, an artistic moment. I ask Haroon what Satisfaxion stocks that other DVD stores don’t. He looks taken aback by that question; there is DEFINITELY an awkward pause. 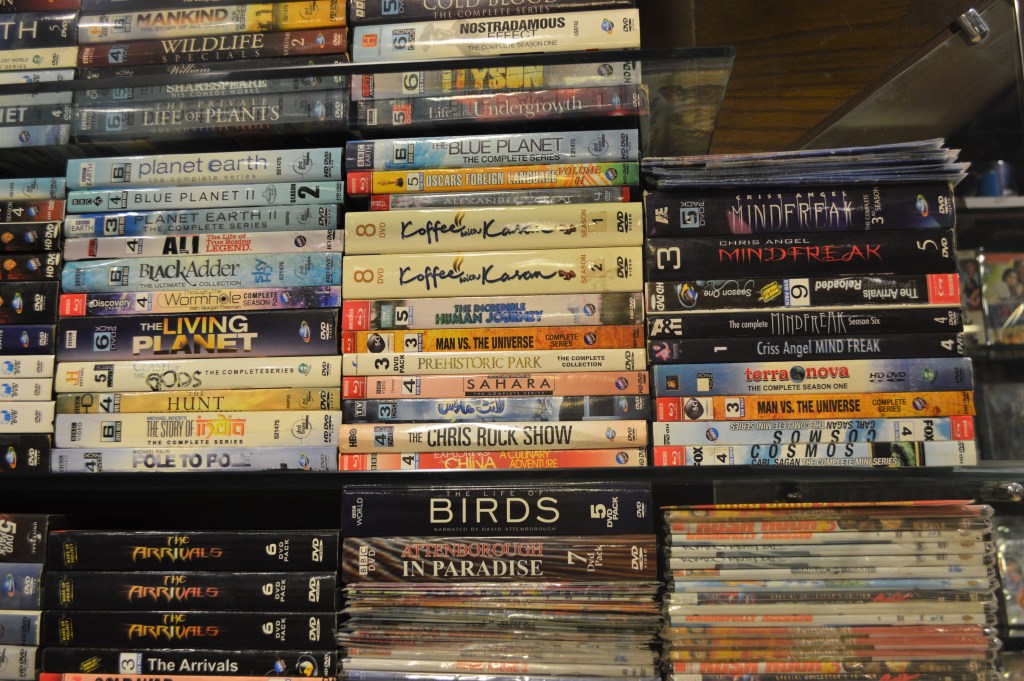 I rush to add that I used to buy art films and foreign films (French, Italian, Iranian etc.) from the store but I don’t see them anymore. Some of the golden moments of my youth (nay, childhood!) have been shopping at Satisfaxion, on the way back from a swim. After ordering fresh juice at Hotspot, I’d stop to chat with the kid who sold decorated pens in the evening and went to school in the morning. This was how I killed my summers (before they could kill me). The Hotspot and Satisfaxion corner was, in fact, My Hood.

Haroon says that they don’t buy a lot of DVDs anymore because of reduced demand, and that’s why they don’t get any more art films as such. It is a surprise to me that Satisfaxion doesn’t download its own material. Like other stores, Satisfaxion purchases wholesale from companies that download content or purchase from TV channels. They don’t have copyright issues with Western releases, no one cares — but Haroon tells me they do purchase Indian and Pakistani DVDs. (I think it’s only fair given, well, COLONIALISM). Haroon is reluctant to mention the name of the organisations the store buys from. Pakistani movies and stage dramas, next to Fitness DVDs.

Satisfaxion stocks Pakistani stage dramas, obscure documentaries, Pakistani TV serials and movies, and anything coming out in the West from TV series to films. There’s a fitness collection (young Jane Fonda, alas, before she became excruciatingly hot) and a large collection of animations for children. 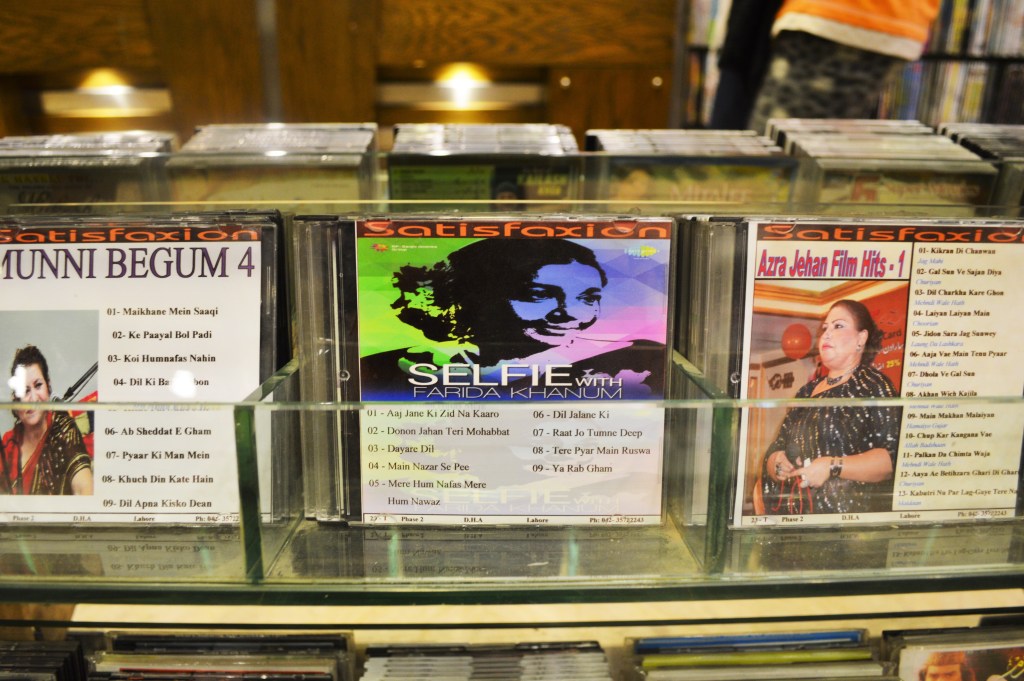 A CD of old classical music with the title…‘Selfie’??

Haroon tells me that forty to fifty people buy the religious content every week. As I write this, I realize: Haroon seems to have a fondness for the numbers forty and fifty. Bestsellers? Recent releases – English and Indian movies, English TV series. There is a low demand for Pakistani dramas and films. 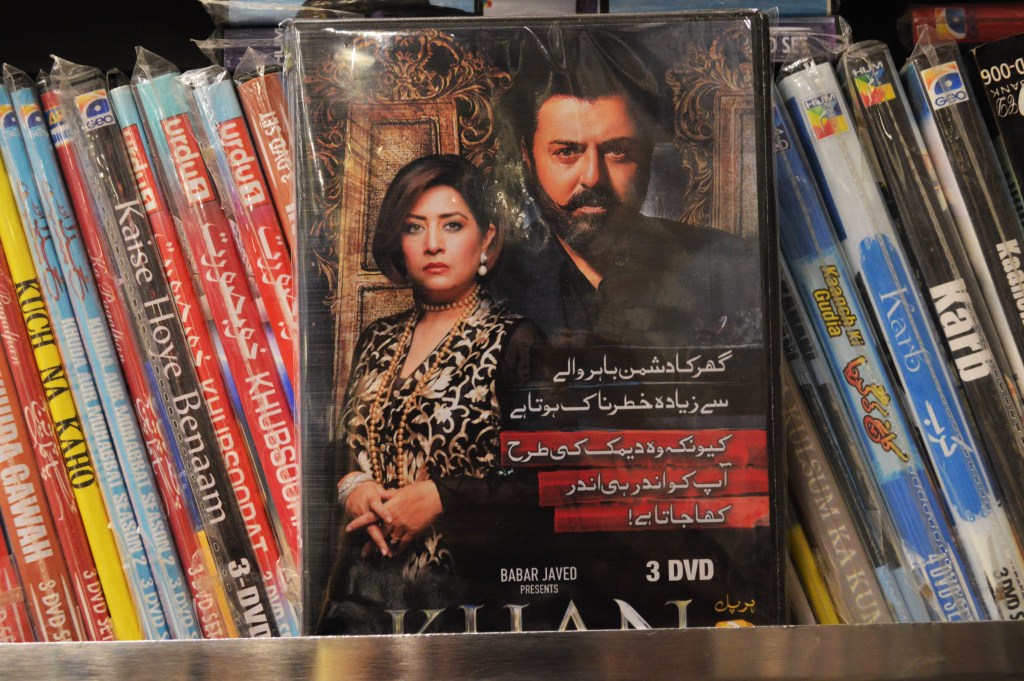 I’m taking pictures when I hear Haroon address a customer at the far end of the store, from his perch behind the counter – the customer wants a recommendation. “Have you seen Get Out?” Haroon yells in Urdu. I’m impressed: I loved Get Out, it’s not recent, it’s subversive. Does Haroon have more movie knowledge than he lets on? I ask him to recommend something for me. He asks what genre I’m looking for, thriller, action, etc.? Comedy, I say. He ponders, then turns to his laptop, scrolling. I wait for a while. Minutes pass. I thought he was searching for something, but no, he was just ignoring me, in a stoic, passive aggressive way. “Down-sizing? Maze-runner?” he finally offers, when I press him further. (#CheetayWalaAttitude) 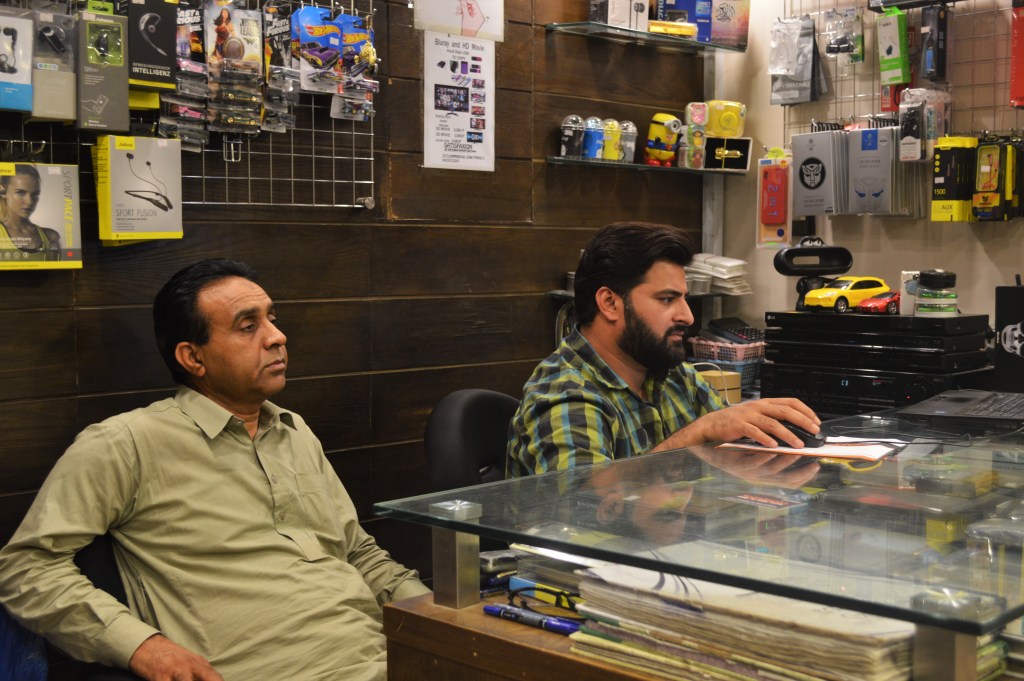 Haroon and his uncle.

My adventure ends by the time Haroon’s uncle shows up to chill at the store. He asks who I am, and Haroon explains that I’m a LUMS student doing a paper on them. I write down Charcoal + Gravel’s name on a card for him, and tell him I’ll let him know when this comes out. He nods politely, relieved to end our interaction.

Tags:
A Page out of History, For the Squad
Share:
previous article next article