Saad Haroon and The Khawatoons at Packages Mall

Thursday marked an iconic day for comedy in Lahore. The Khawatoons and Saad Haroon were flown from Karachi to Lahore for an invite-only event hosted at the Cinepax in Packages Mall. Audiences could not have been happier. In a night full of laughter and energy, comedy took to the big stage in Lahore, and I hope it’s here to stay.

After our giveaway for this exclusive event got an overwhelmingly positive response, there was much anticipating. Laughter Therapy had to live up to the hype, and then some. We’re pleased to say that this night of comedy did not disappoint.

As I said before, the stage was set. People walked into a decked out Cinepax lobby area, complete with red carpet and a media wall. A significant part of the 8 screen cinema complex was cordoned off for this special event, and you didn’t see us complaining. In fact, it seemed rather Oscar-y —  the way glammed out models, influencers, people of interest, and distinguished members of the audience rolled up. To see and to be seen, amirite? Seriously though, everyone kept it really, really classy. 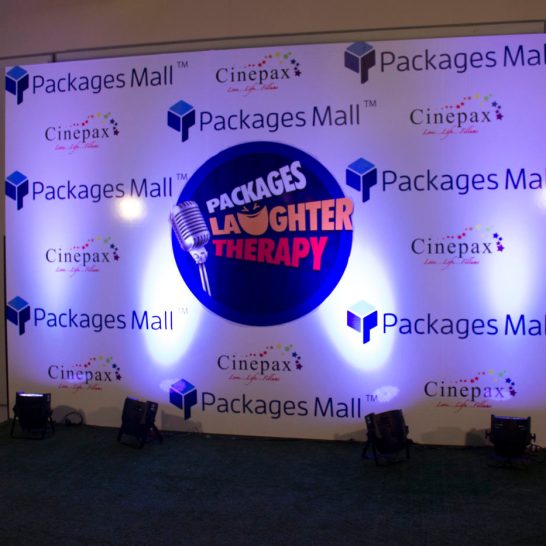 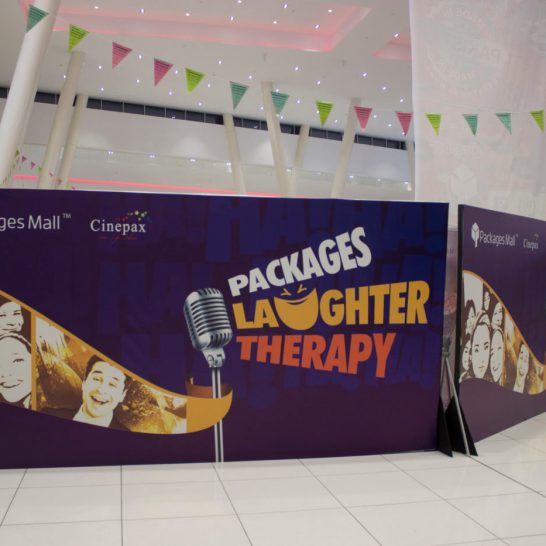 Once the show was underway, it went on at a cutthroat pace. The Khawatoon’s played game after game with the audience, displaying an acquired knack for improv. Most notably, their ‘guide to picking your nose’ and comic depiction of how Pakistani television advertisements could be shot had the audience aching at the sides. They were obnoxious, they were loud, they were all over the place — all in the best of ways. As their time on stage came to an end, they were met with a standing ovation. How’s that for an audience? 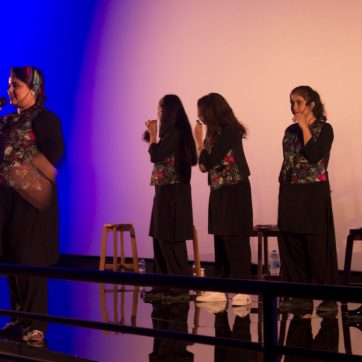 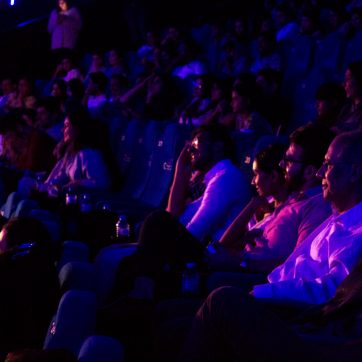 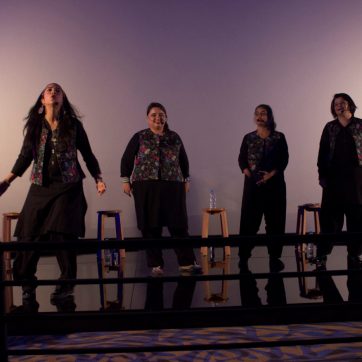 30 minutes before Saad Haroon followed The Khawatoon’s set, Charcoal + Gravel got the exclusive opportunity to catch him behind the scenes for a look inside Pakistan’s comedy industry. A sprightly conversation warmed us up for what was to follow.

Saad Haroon’s brand of comedy is easily described as wholesome. He’s not there to ruffle any feathers; he just wants to make people laugh. As with most corporate events, some of the content is shaped by the requirements of the organizers. He doesn’t seem to mind this. In his own words, “Being a Pakistani comedian, there are a lot of things I can’t talk about. I could make you a list of things I can’t talk about and then I can’t tell you the list.” 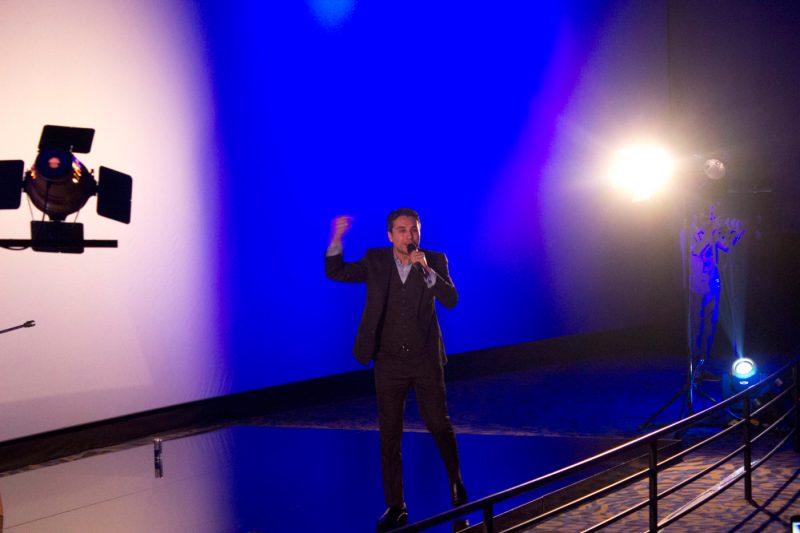 I wonder if he is far less filtered when he performs overseas but Saad shakes his head at the notion, “At the end of the day I’m still a Pakistani boy at heart, I’m not someone else when I’m abroad.”

When I mention The Khawatoons, Saad Haroon is all praise for them “I see these new troupes building comedy where there is none and I’m just happy to help in any way that I can.” He acknowledges the challenges faced by comedians in Pakistan especially due to the lack of dedicated comedy clubs in the city, “You just have to wear so many hats to get your voice out.”

So who is Saad Haroon, really? “So there’s a lot of different Saad Haroon’s out there, it’s kind of schizophrenic in a way.” If he’s overwhelmed, it doesn’t show. Throughout the course of our interaction, Saad radiates unwavering enthusiasm. 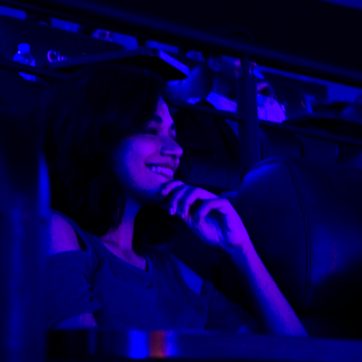 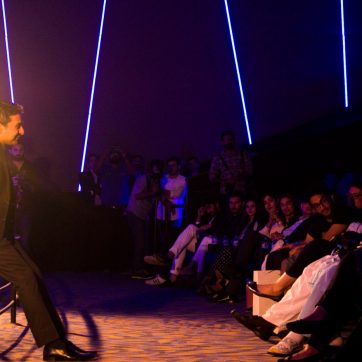 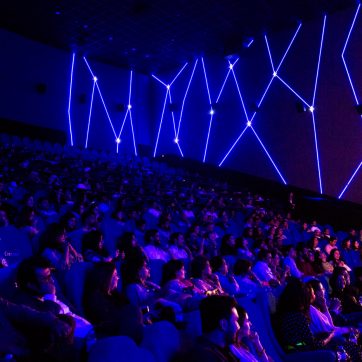 On stage, Saad Haroon was bouncy as always, bringing his incredible energy to the audience. In a way, he makes people work for their yuks. He jokes about his marital life, his approach to comedy and his relationship with his father. This makes him more human somehow: the show was intensely personal and relatable. And just when you thought the applause would get to his head, he would cede attention back to The Khawatoon’s preceding act, or to RJ Sophie, the MC for the event.

When asked to comment on the evolving comedy landscape in Pakistan, Saad Haroon is optimistic, “This is where it starts, with small inclusive hubs of performances. You’ll see nights like these happening more often. It’ll work its way up from there, where it’s anyone’s guess.” 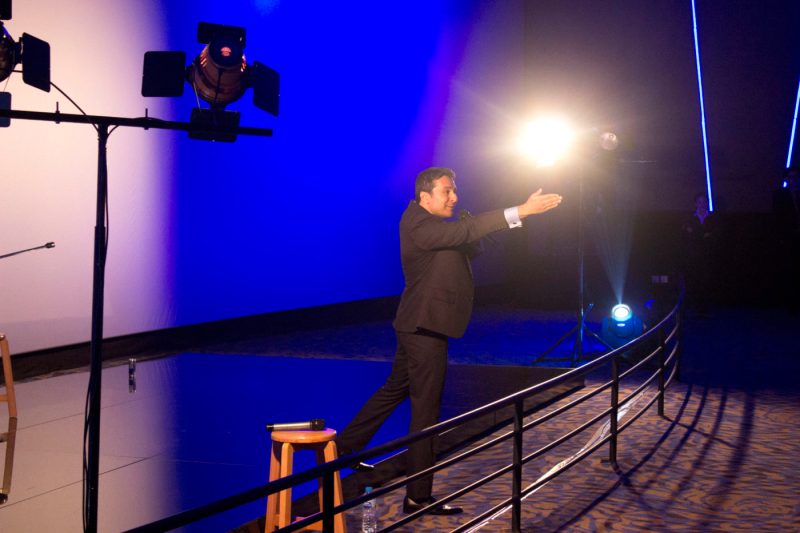 To Saad, the fact that we’re interviewing him as he waits to perform in one of Lahore’s most premier malls is a testament to the growth of the comedy circle in Pakistan. “I wouldn’t be having an interview like this 15 years ago. 15 years. We’ve come a long way.”

You would think that someone as prolific as Saad Haroon would have a hard time finding humility, but I sense a grounded, composed comic beneath the quirk. Hell, he just seemed happy to be there.