In May 2018, Rizq fed a million people across Pakistan.

A broker between the privileged and the underprivileged, Rizq was never intended to scale this rapidly. But grown it has, against all odds. Cofounder Musa Aamir walks me through the unenviable task of feeding Pakistan.

I meet Aamir and the rest of ‘team Rizq’ in their office; a cool basement in the commercial area by Cavalry Bridge. Bright yellow, important-looking charts line the walls, all except one— a photo wall that appears to be the result of DIY tutorials, highlighting the organization’s journey over the past five years. Everyone is seated around a large rectangular table. Boxes containing chart papers and stationery fill up most of it, along with snacks and eco-friendly water bottles.

Aamir’s self-deprecating humor and knack for nonlinear storytelling is endearing. With a dismissive hand, he pushes away the pedestals that people prop him up on. 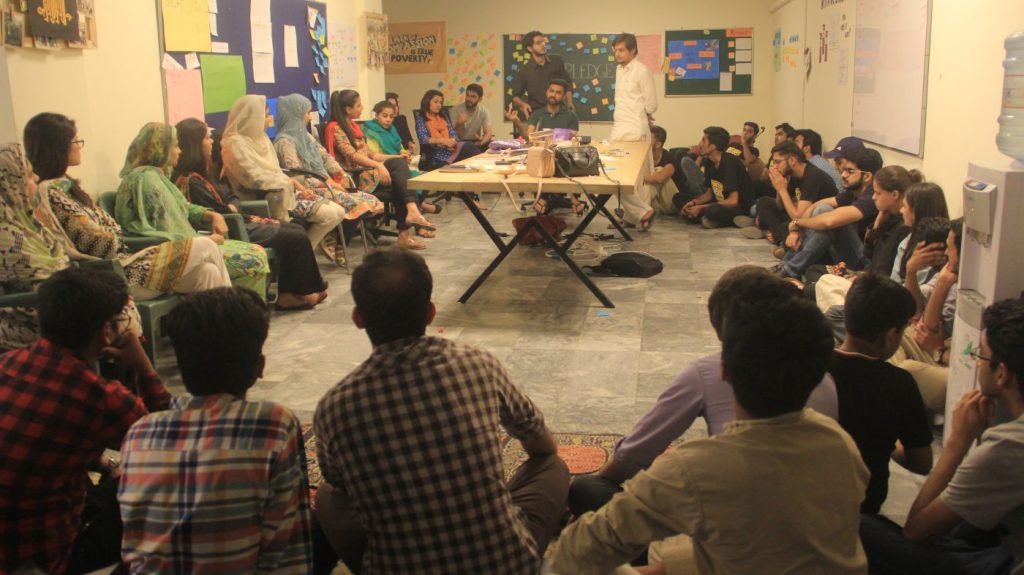 Without having to explain much, Aamir understands what I’m here for. He takes me back to 2012; to sitting with his friends (now co-founders) Qasim Khan and Huzaifa Ahmed at the Pepsi Dining Center (PDC) in LUMS; to musing over wasted food on university campuses; to the prospect of reallocation. How? They drew a blank. But everyone was game, and that’s what mattered.

Was this a novel conversation? Hardly. Many a trio has occupied cafeteria tables and cooked up similar ventures. But cooking up ventures and changing social landscapes are two very different things. 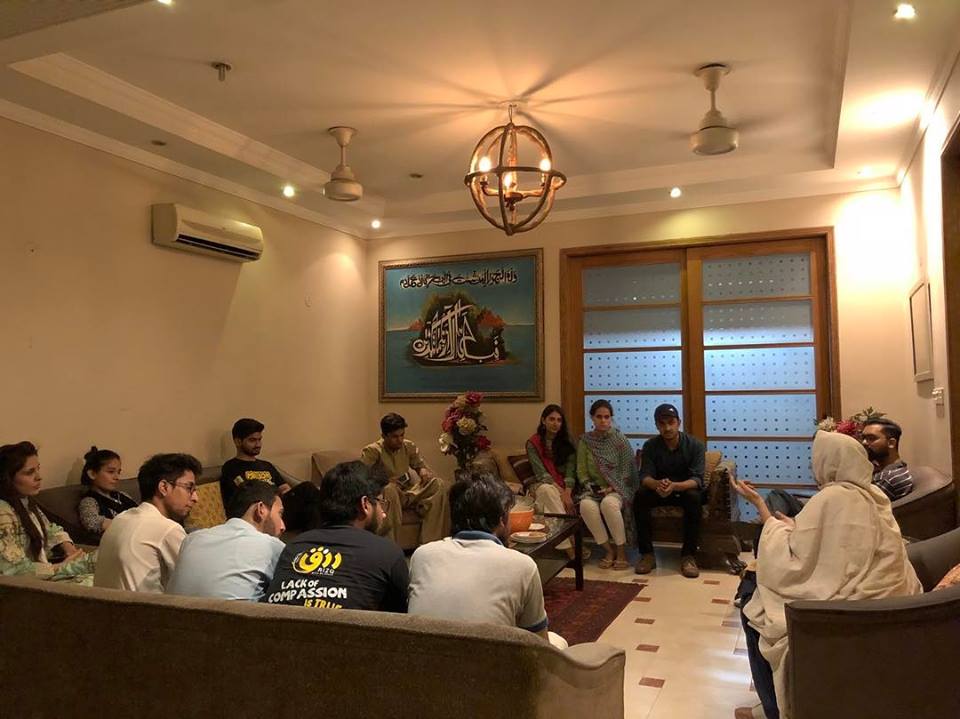 What these three had going for them were failsafes: a mentor who indulged in existential conversations, philanthropic mothers and an encouraging community.

The mentor, Fahad Bhai [mark of respect; brother] was the first person they approached. He, in turn, posed a potent question:

“Do you want to do this for your personal satisfaction, or to solve a problem?”
Aamir accepts that this caught them by surprise.

“During the summer holidays, we decided to focus on how to go about our project. We vowed to forgo summer internships and solely work towards getting leftover food to the needy.”

Right on cue, the minute summer hit, Ahmed took off for an internship. Aamir and Khan were left behind with no internship prospects and one man down. They decided to make the most of what they could by carrying out a communal iftar for Khan’s mother. Someone put up a photograph of this iftar on social media.

Completely by accident, they had set something in motion. A Facebook page was hastily created and Rizq was operational. For the rest of this month, Aamir and Khan were administrating sponsored iftars for different marginalized communities. One thing was clear:

“As long as we had our shit together, people were going to enable us.”

By the time summer ended, they had three restaurants onboard, including The Monal Lahore. Junior year kicked in, and Ahmed was back in the game. Together, they would ‘hijack’ (Aamir’s words, not mine) hostelites from LUMS, use whatever forms of transportation they could find and end up at these restaurants around 1 AM. These dozen or so hungry hostelites would pack up chicken steaks and lasagnas to deliver to the needy the following morning. Nothing could test their patience more. 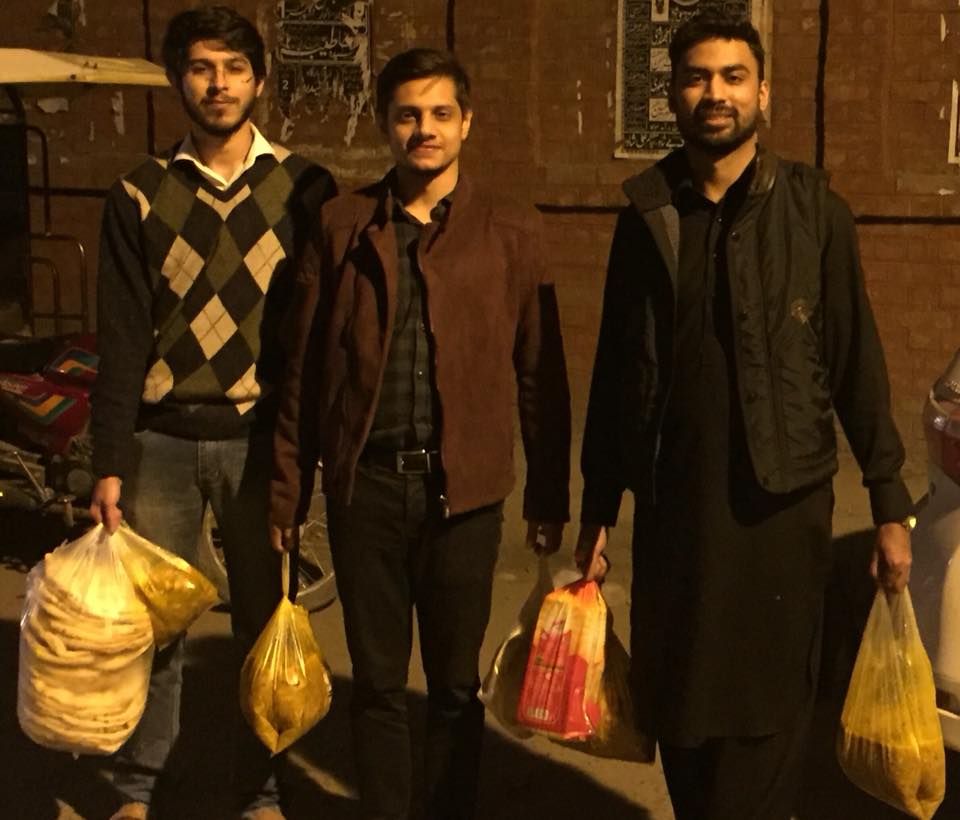 This model seemed to be working for Rizq, but it couldn’t be sustained. The problems were compounding; the project had no financing, fatigue hit them, as did the brunt of studies at LUMS. Monal’s supply was handed over to a person who conducted regular dastarkhwaans [communal meals]. The founders began focusing on their studies. The next time Rizq started up, they made it count. 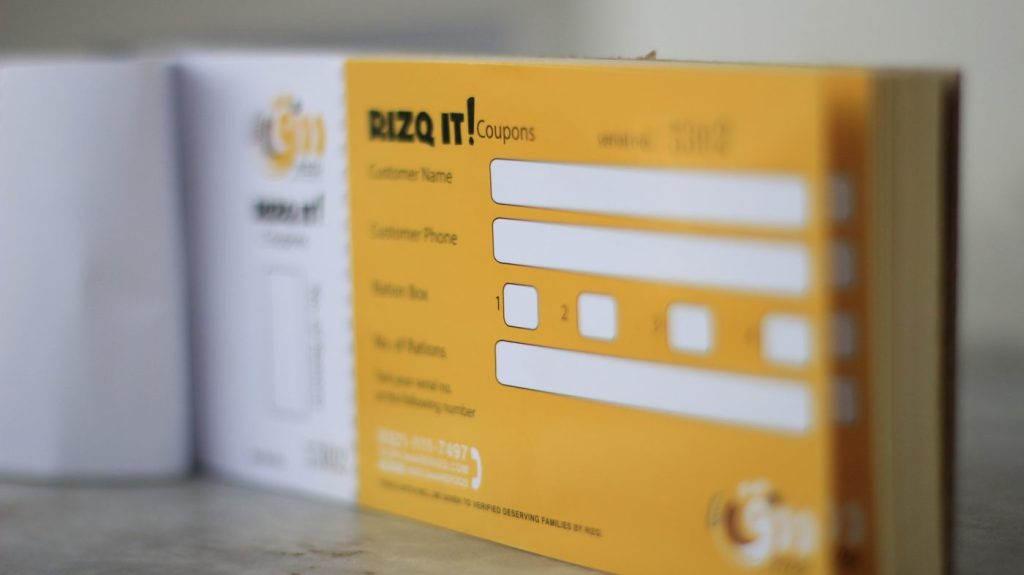 Towards the end of Junior year, the trio noticed their batchmates’ lack of interest in the candies they would get instead of loose change at the cafeteria. They proposed the option of ‘Rizq It’ to LUMS: instead of a five rupee candy, students could donate that sum to Rizq instead. These donations, very soon, began providing a number of underprivileged schools with lunch boxes. 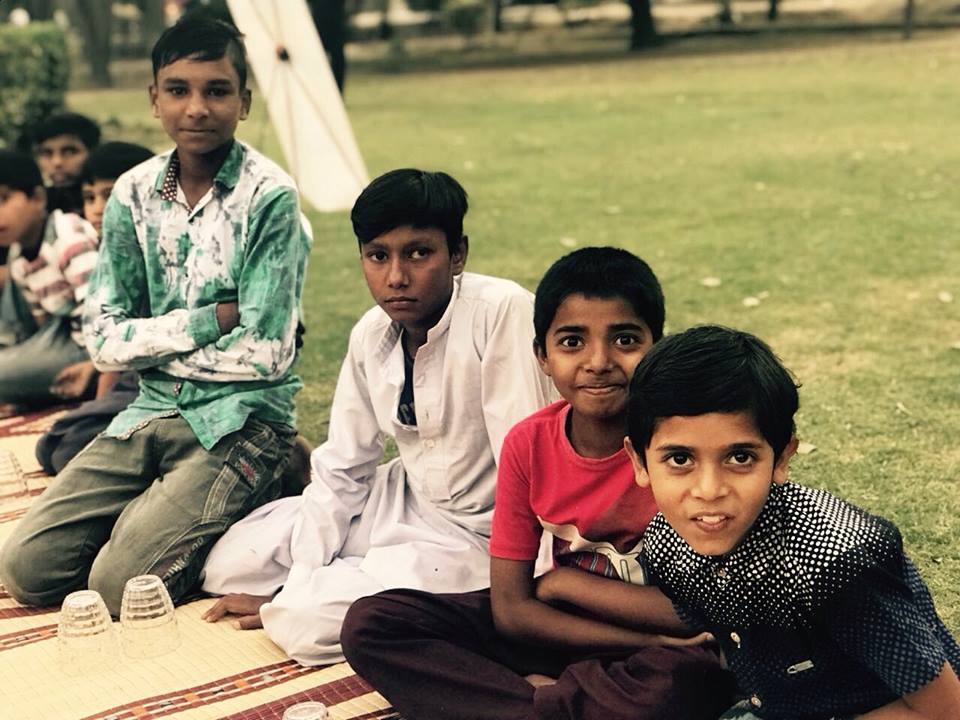 Where they were once saving leftover food, Rizq was now saving money that would’ve otherwise gone nowhere. Technically, it was the same concept.

The following Ramzan, they were approached by a big brand who wanted to sponsor an iftar. Through this, Aamir, Khan and Ahmed struck their first profit and divided it among themselves.

But they didn’t use all of the funds. Aamir and Ahmed in particular wanted to put it towards something useful. Then, they struck ‘gold’: investing in a potato chips thela [roadside stand].

Aamir can’t help but laugh while talking about this part of their journey:

“We would go to different restaurant owners and ask them for advice on how to ‘optimize’ a thela.” 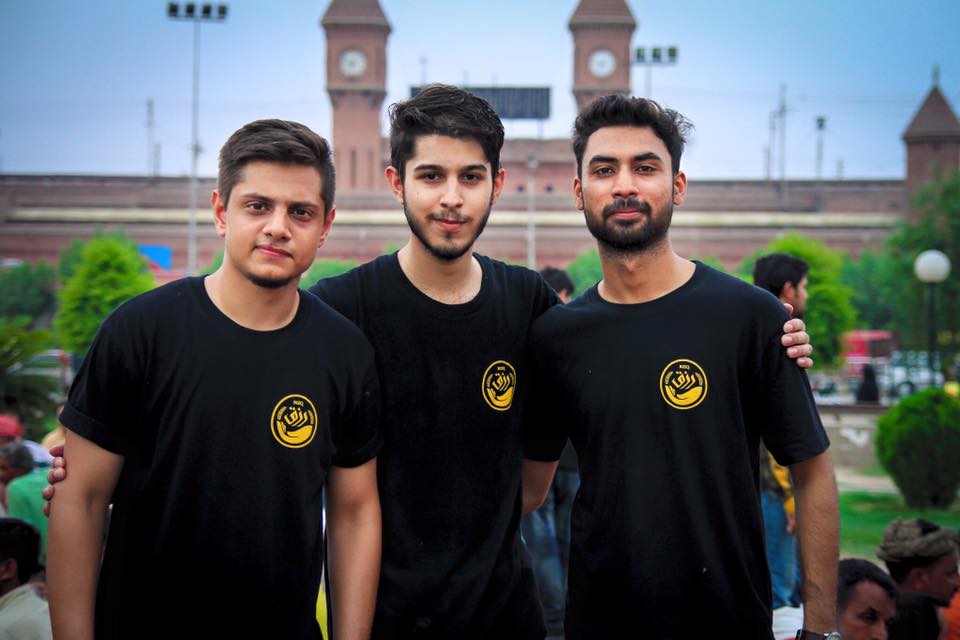 Unsurprisingly, most of these restaurateurs asked the two of them to chill out. They soon scrapped the idea and for the right reasons. Perhaps this is testament to the fact that the team only worked well when all three of them were in on the action.

“While the rest of our batch was headed into Unilever’s recruitment test, we held onto whichever friend we could find and headed out.”

For all intents and purposes, Rizq seemed to be the end goal.

A little before graduation, Aamir received a phone call from Monal:

As luck would have it (or wouldn’t), the person Rizq had connected Monal with bailed. The food was theirs to take— they felt guilty about its wastage anyway— but with no hostelites to hijack, they didn’t have a way to collect and disburse it. 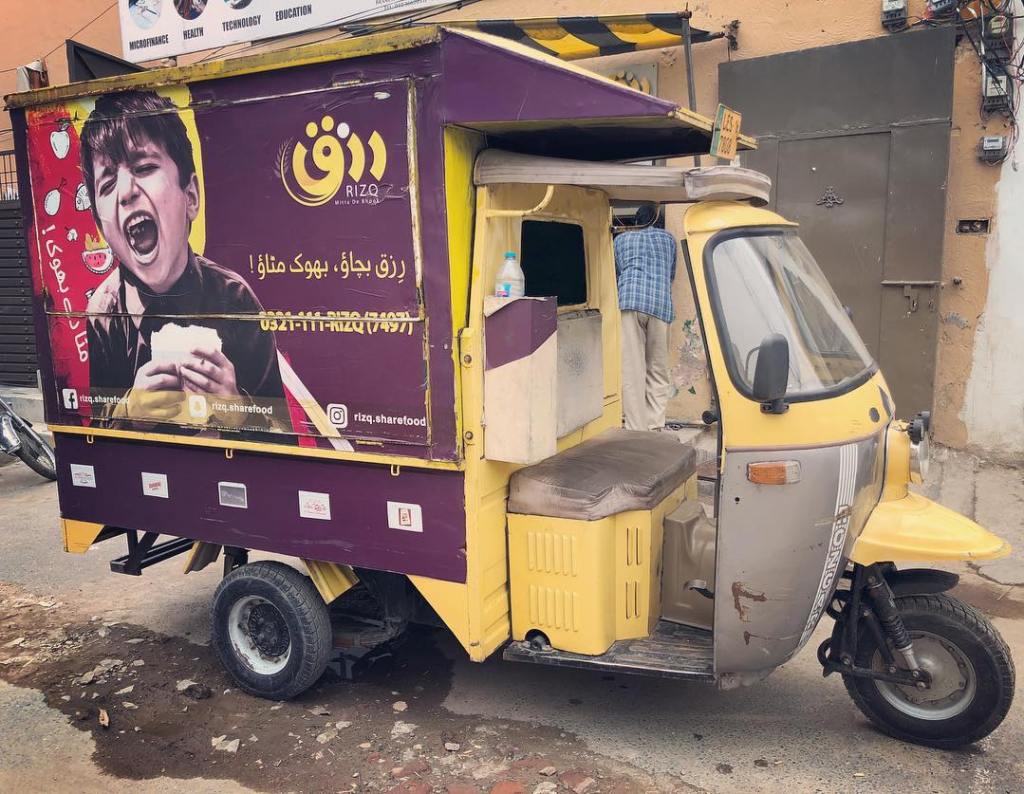 What Rizq did have was money, left over from the failed thela venture. They used it to purchase a rickshaw, rebranded it ‘Rizqshaw’ and began delivering food from Monal to multiple destinations.

When photographs of Rizqshaw surfaced on social media, a number of restaurants called Rizq to get on the Monal track. Eventually, individuals asked if Rizq could pick up leftover food from their residences.

Aamir began to sense the potential here. The founders pulled their contacts together, and Rizq decided that a steady supply of food should be matched by community development.

In comes Pakistan Development Exchange (PDX)— a startup that connects marginalized communities with those looking to give.

It was a perfect match for Rizq, and together the two organizations began documenting the families around Sultan Park in Qasimabad, Lahore. But there was one very real problem here: Aamir, Khan and Ahmed were fresh graduates. If Rizq was to become their full-time occupation, it had to become a profession as well. 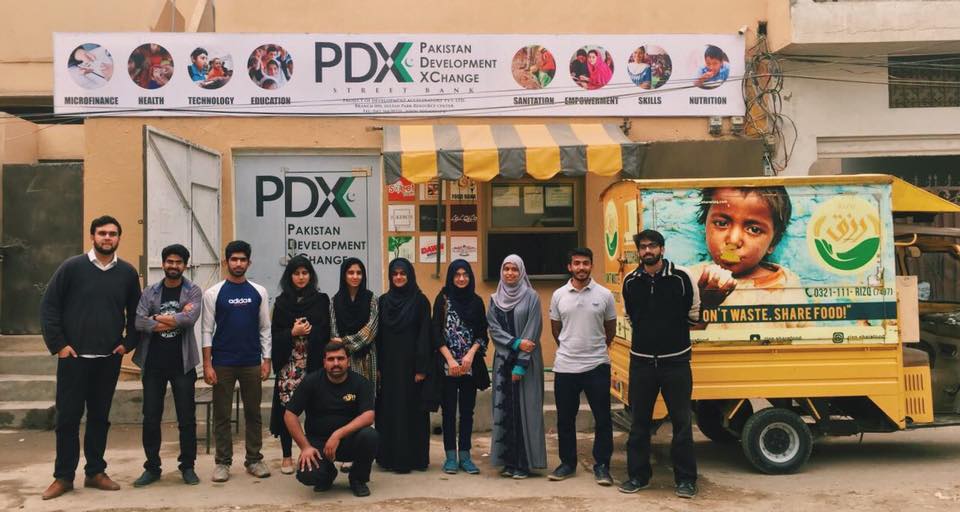 As they spent more and more time with their chosen community, Aamir came to a different solution:

“There is an assumption that underprivileged people have no willingness or means to pay. They, in fact, WILL pay. Sure, they may not be able to afford two thousand rupees, but it’s not like they won’t give twenty rupees for a decent meal.” 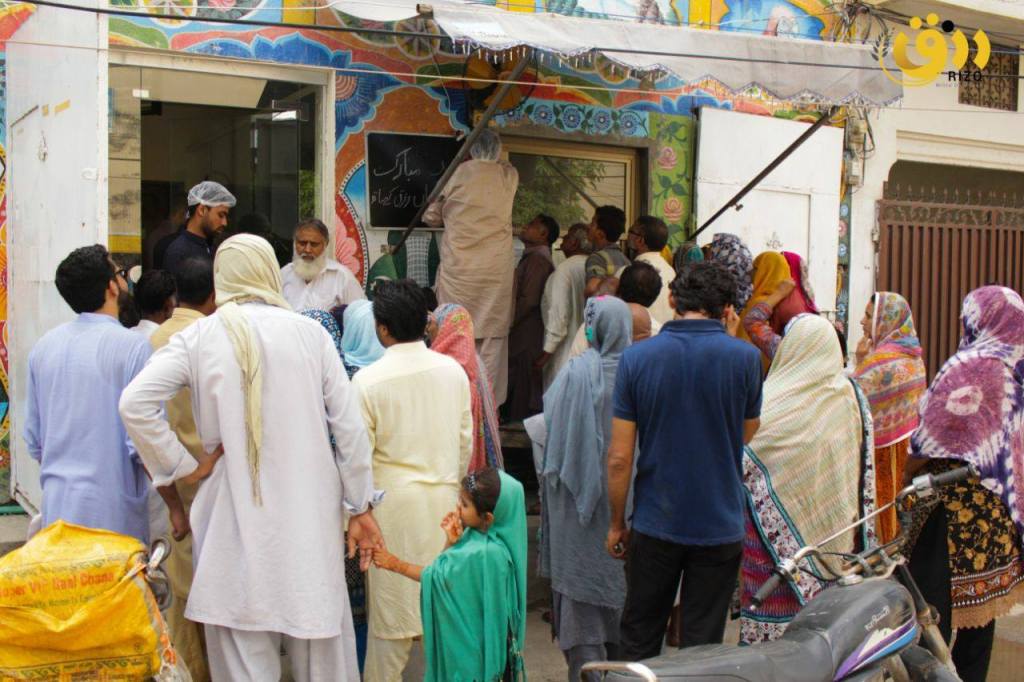 Rizq decided to ‘sell’ the repackaged food— collected from Lahore’s top restaurants— for PKR 10. PDX’s Sultan Park branch soon became a community center, as the prospect of good food attracted families towards it.

By the end of the first day, Rizq earned a total of PKR 610. This was going to work.

Rizq now has an office in Qasimabad. Its Food Bank is ever-bustling, near Sultan Park. It also has a sustainable business model:

“We identify an underprivileged community through a feasibility study conducted by either an existing NGO (such as PDX) in an area, or our team. We then set up Food Banks there. Each Food Bank is responsible for around 2000 families in that community. We recruit volunteers, mostly students, to survey these families and categorize them according to their Incidence of Poverty.”

Any chances to do additional good – annoyingly so – within this model are taken.

“We receive two kinds of donations: excess food and money for groceries.” 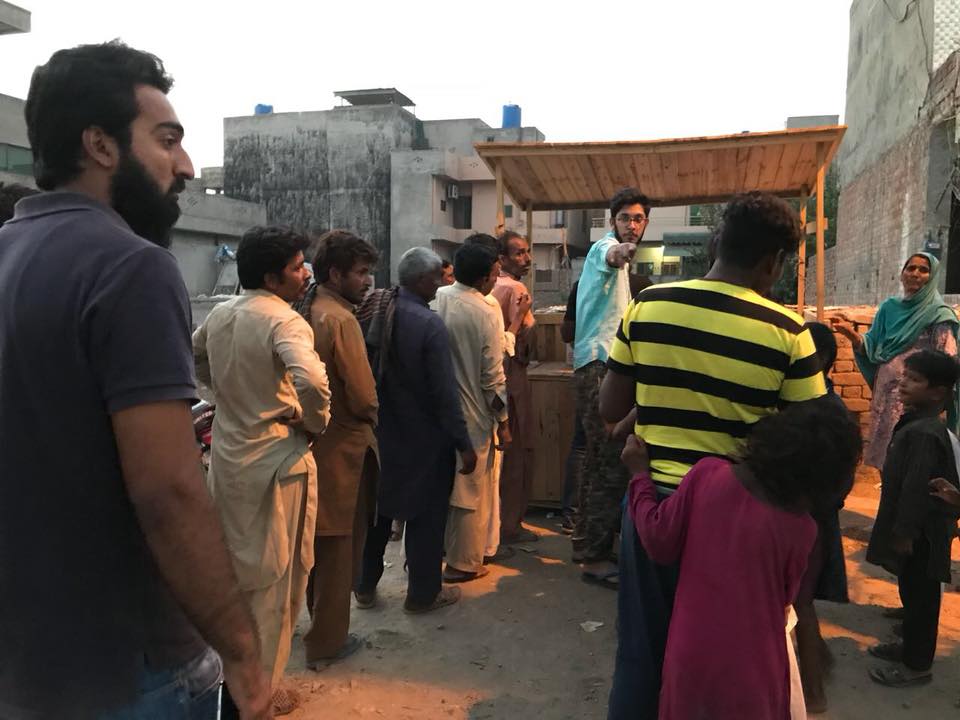 The organization (dare I say it) selects families in designated areas that require food supplies. These families are given groceries on a monthly basis— which could amount to thousands of rupees— for just PKR 200 a month. In return, Rizq asks the families to send one able son or daughter with their volunteers. They are then taught skills and made employable. 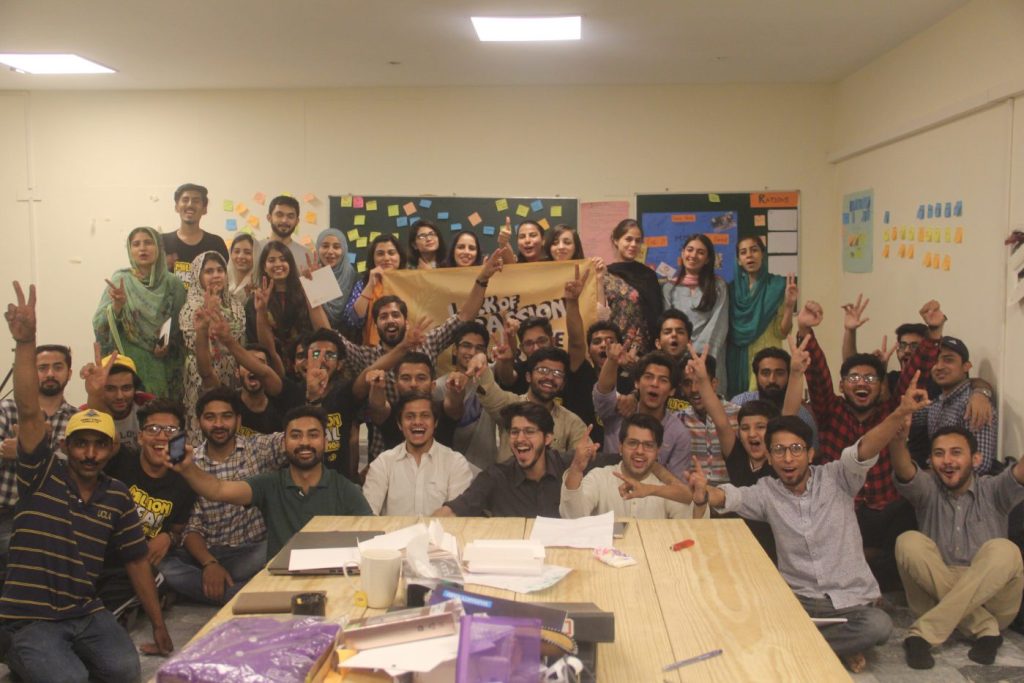 Rizq is not a two-and-a-half to three man ship anymore. The core team is still small, with designated employees for pickups and deliveries. It has built a network of committed volunteers who conduct studies, spend time with Mustahiq [worthy] families and show up to lend a hand at last-minute dastarkhwaans.

Aamir was a Development Economics major. But he categorically rejects (or atleast hates) the concept of scarcity:

“Every month, Rizq collects over six tons of food that would have gone to waste— just from restaurants. 3.6 million tons of food is wasted in Pakistan annually. Give it a 10 /ton cost and that adds up to 3.6 BILLION dollars worth of wastage. Annual food-based philanthropy in Pakistan amounts to 5 million dollars. Pakistan has produced more wheat than is actually needed in the past five years… Basically, I don’t care what the textbooks say; this is a resource optimization problem, not a lack of resources.”

…Who are these people and what have they done to those thela-seeking Juniors?

I’m no economist, but Rizq’s success backs Aamir’s academic claims, hands down. The mission, then, is simple: 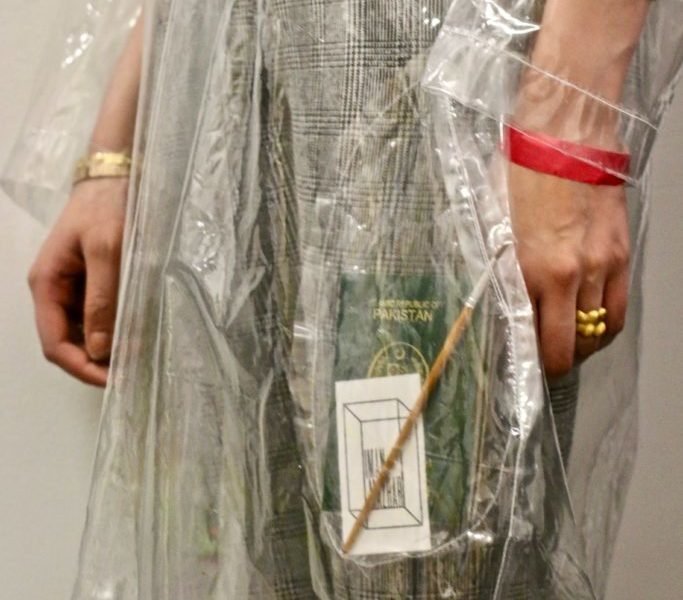 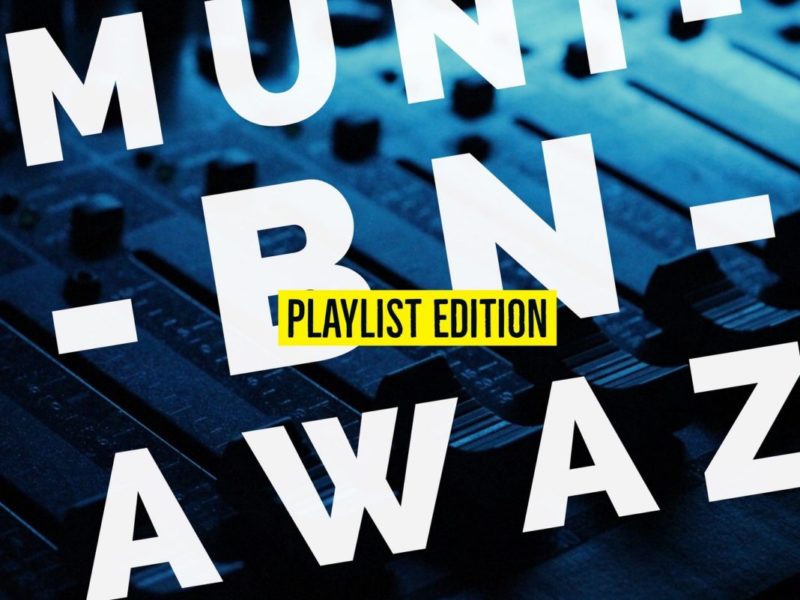 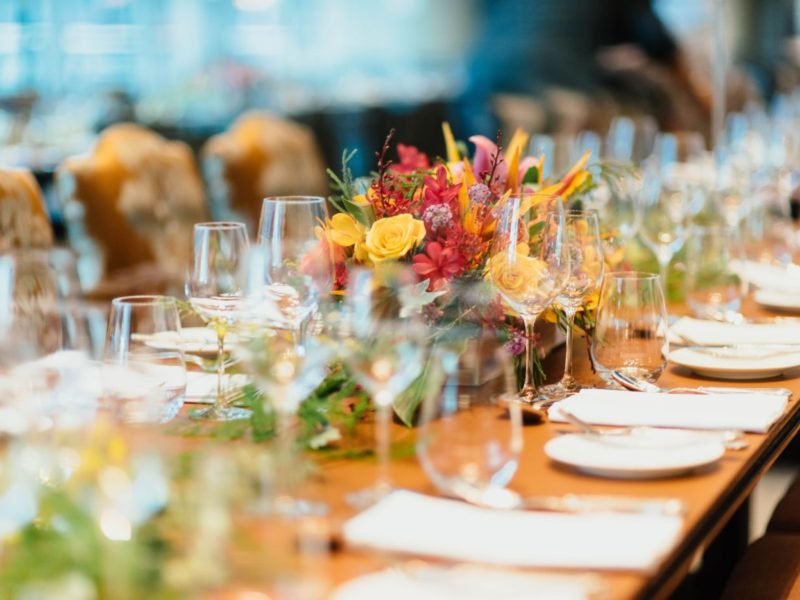