Ravioli at Rivoli: A Breath of Fresh Air

As I sit (sometimes I stand) writing this review, the best word to describe my state of being after Rivoli: inquisitive. At 8:45 PM on one of the (hopefully) last days of Ramzan, it was empty. In true Ramzan spirit, I made sure to waste as much food as possible by ordering far more than I could possibly eat. 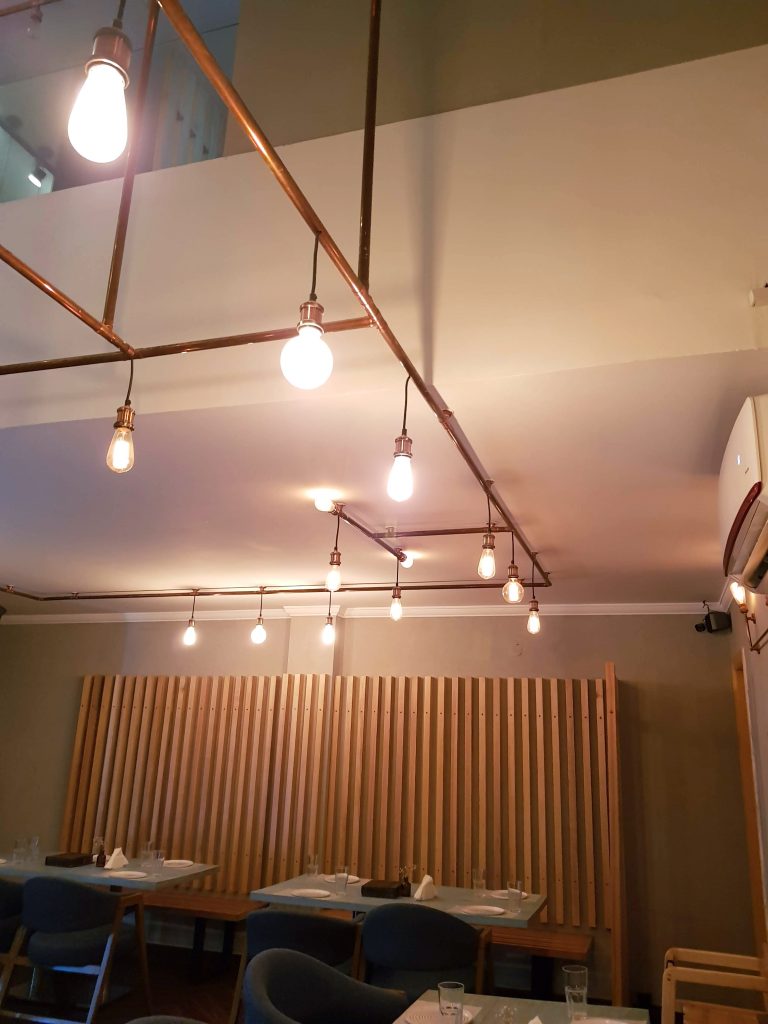 I went into Rivoli intentionally influenceable, in the wake of an uncharacteristically light iftar of pakoras [vegetable fritters] and channay [chickpeas]. There’s two floors, and the restaurant markets itself with a low glow: LED lights spell out RIVOLI on the outside. Inside, the rustic décor is lightweight yet practical. The warm hues helped wash out an inherent sense of entitlement I often feel when reviewing new eateries. Simple and to-the-point furniture. Some exposed lead piping for that ‘industrial’ look. Cool plates and tiny vases with flowers in them, too. I’m in love with one particular tiny vase. And oh… paper napkins, in case you’re expecting the royal treatment. 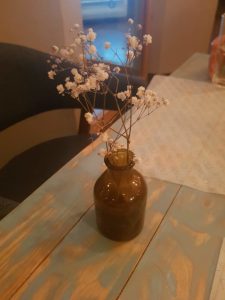 The menu at Rivoli is inspired by Italian basics.

They have their own take on linguine with mushrooms, beetroot, feta and hummus. Then there’s gnocchi with a cheesy marinara on a parmesan-crusted chicken fillet and beetroot fritters. Also available is a version of eggplant ‘parm’, with minced beef, cheddar in lieu of parmesan, and pomegranate. Their crostinis come with salsa, cauliflower, and beetroot. So on and so forth (lamb shank pie, grilled red snapper, spinach ravioli, two croissant ‘club sandwiches’). There’s also stuff for calorie counters, like DIY peanut chicken lettuce wraps. 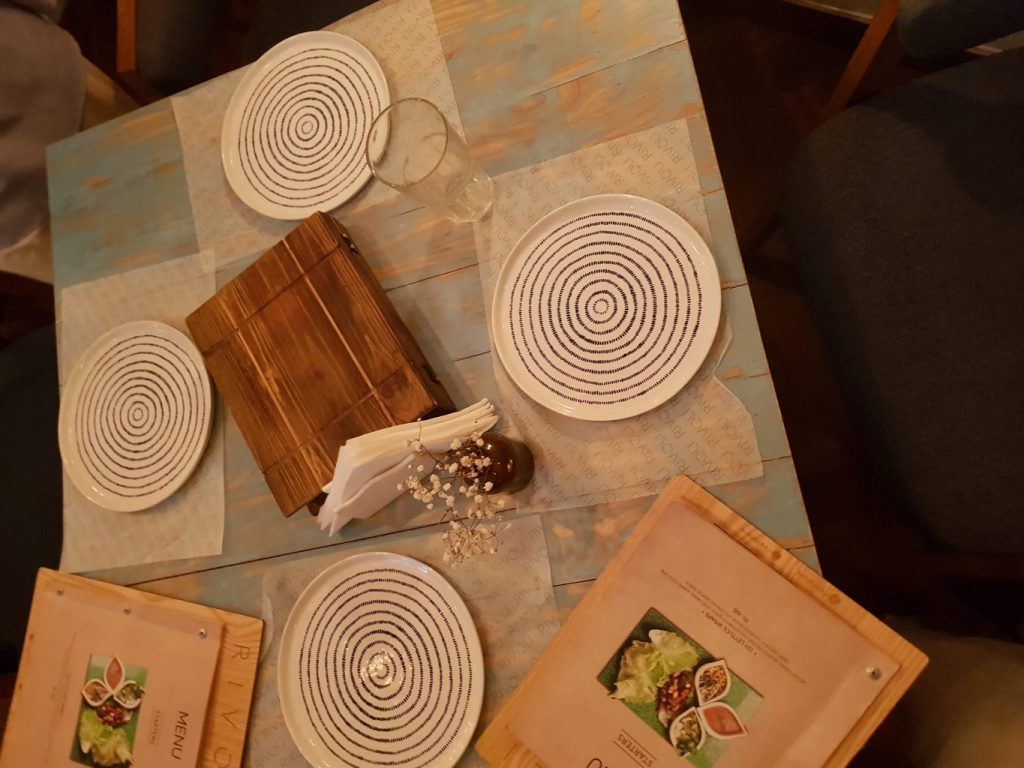 The menu, despite me making it out to be endless, is concise and daring. There are a total of 11 items on the savory menu. 4 more on the desserts page. And that’s that. I have not seen these entrees featured in other restaurants in Lahore, so kudos for thinking outside the box and sticking to signature dishes.

What you need to know: Rivoli is adventurous, and really loves beetroot and marinara.

One thing I will say here about the plating is that it is exceptional. Each item I ordered came equipped with visual paraphernalia to make the right colors pop. There was also a sense of wanting to achieve balance within each item of the menu. But more on that in a bit. 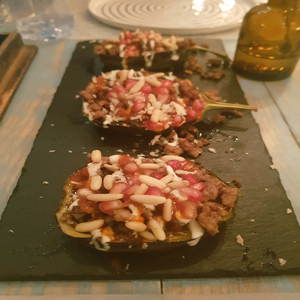 Service was prompt albeit sometimes negligent (should have been better at an empty restaurant). I got the ball rolling with K’s Signature Starter aka, eggplant with minced beef. Man did it look good. It came on a slab and you could tell that it was fresh out the oven. When I dug into it, however, I immediately realized a blunder: the eggplant and the meat had not been seasoned. There was almost no salt and spice, and I was struggling to taste any garlic. I expected the pomegranate to add a tangy kick, but it was lukewarm and mildly sweet. That being said, the quality of ingredients was all there, and a minor tweak would easily salvage an otherwise overlooked item on the menu. 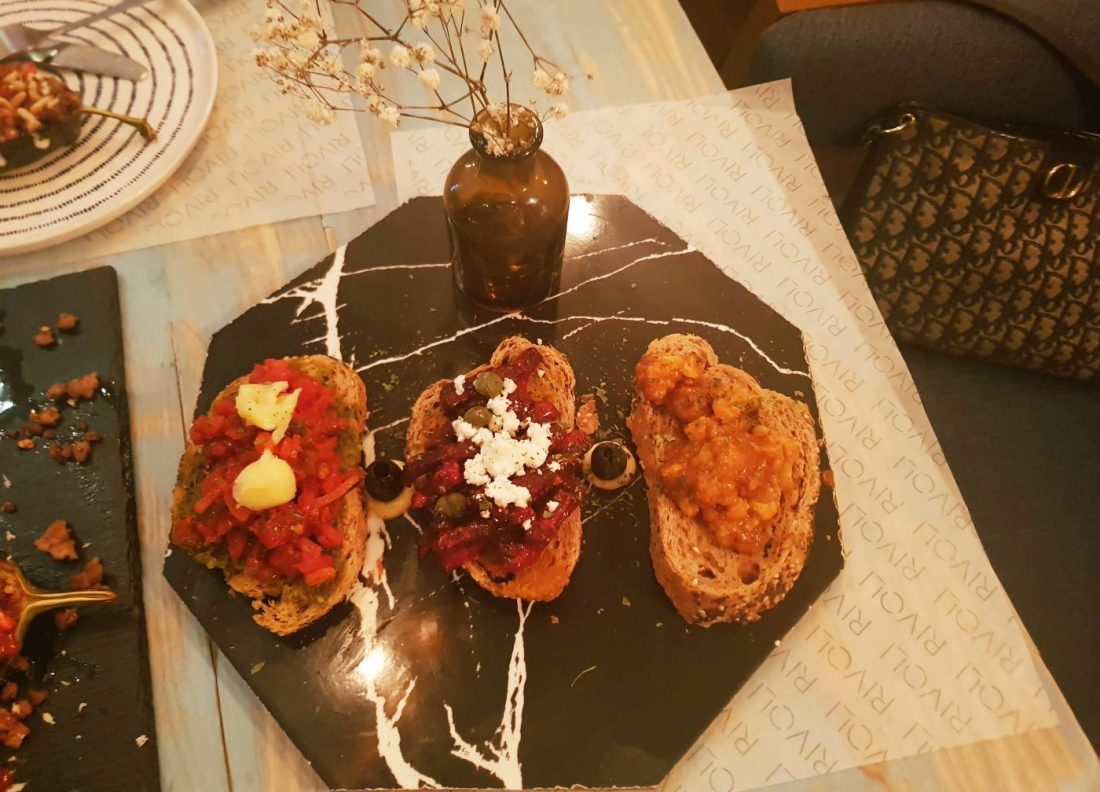 Next were the three crostinis, or the Rainbow. “These are quite spicy,” said the waiter. “Even better,” was my instant response. I had been warned. When the crostinis arrived I immediately noticed the bread. It looked goddamn amazing (Amavi’s, I suspect). Let me walk you through quickly: the cabbage variant was extremely spicy, but had a nice non-desi vibe to it. It did not feel like gobi-gosht. The beetroot (also extremely spicy) texture should have gone super well with the cheese pairing, but was drenched in marinara so I couldn’t really taste it. The salsa based crostini, at least to me, tasted like salsa from a jar on bread. Not bad but overshadowed by spice and marinara.

I had ordered two mains. 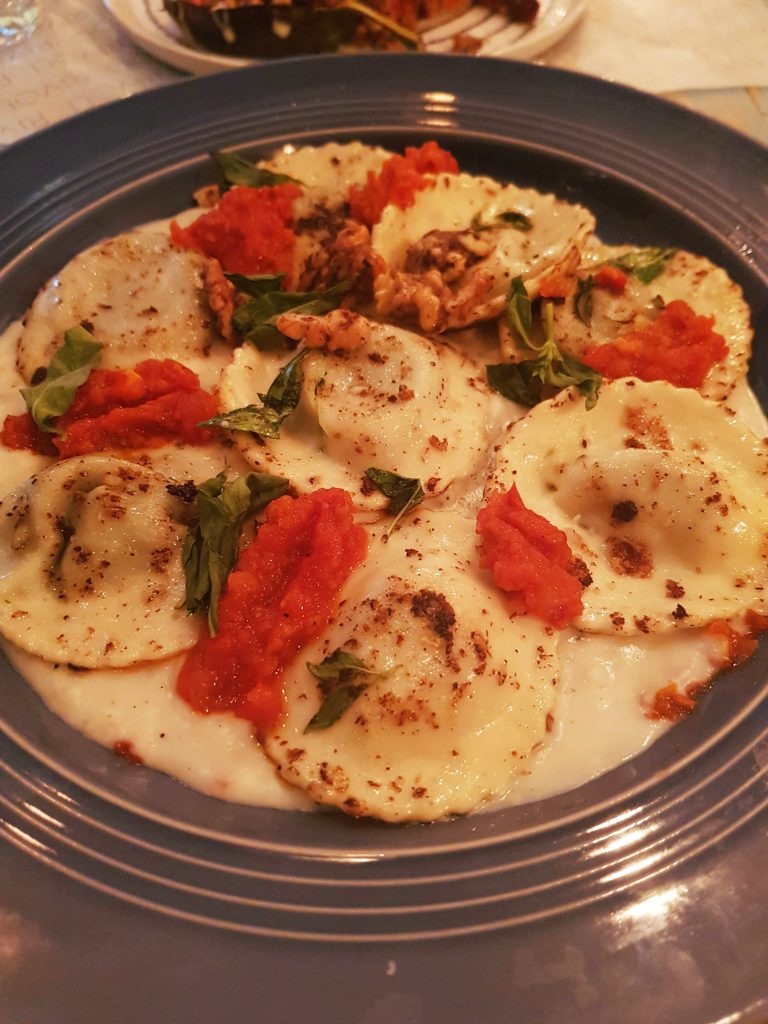 Spinach Surprise, the diva of the night

First up was the Spinach Surprise.

Odd name, yes I know. But when it arrived I was truly surprised. The ravioli was filled with spinach and cottage cheese, and a cheesy sauce with walnuts, some marinara and parmesan surrounded the pasta. This entrée is model material; photogenic, it blushed as I took pictures and I had a hard time getting it into my mouth. Everything worked. The sauce was cheesy without being clotty, and the pasta, though a bit thick for my liking, was cooked well. The filling was the main event, as it should be. Creamy with the cheese and buttery with wilted spinach, it was legit. The only advice I have: add a contrasting flavor. There’s a reason why goat’s cheese works with spinach. Would order again. 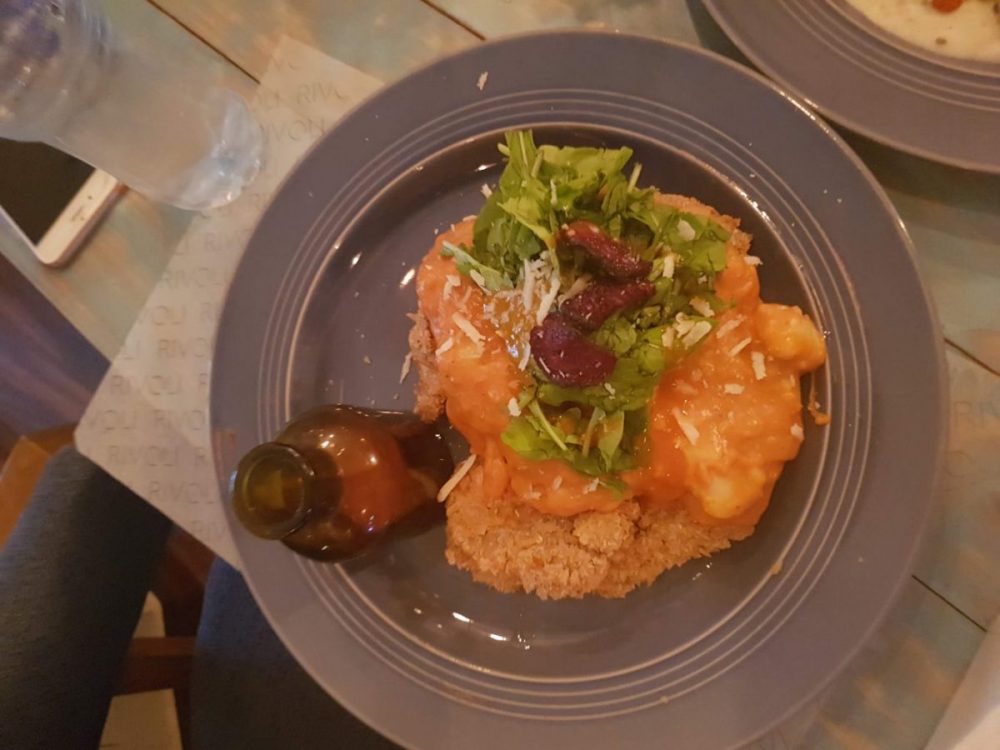 A whole lot of color on this chicken parm.

Green, red, brown, and orange, it was a visual treat. What I had here was potato stuffed gnocchi in a cheesy marinara sauce, and the chicken fillet that it sat on was massive. I usually refrain from ordering chicken at restaurants, but this one I had to try. The chicken was the star here, and I found myself taking bite after bite of a well-seasoned fillet. The parmesan crust on the chicken did the trick; it remained crispy even though it was pretty much immersed in the marinara. The beetroot fritters were sweet and sour, and really added the oomph factor to the entrée. Everything else, however, was extremely sweet. The marinara was sugary, and took control of the plate. I would have preferred something with a spicy kick or again, with a contrasting flavor, but it did what it set out to do quite well.

All the items on the menu were very reasonably priced, yet I did not stick around for dessert as usual. Sue me.

The service was reasonable. The ambience? Great even. I can tell that Rivoli’s menu has been curated with TLC.

Rivoli dares to do something different in a market saturated by the same old shit. And I’m all for that kind of innovation.

Honestly, it almost gets there too. A nudge in the right direction and it could be my DHA go-to, if I’m being frank. I would go again.

Next on the bucket list: lamb shank pie and linguine, maybe some desserts.