Our writer visits Panwaari in Bahadurabad Karachi, and can’t help but wonder if gentrification has gone too far.

The paan shops and khokhas erected at every street corner are an important part of Karachi’s aesthetic, as are the beetle stained walls across the city. Pan spittles make an appearance on most streets and public places while paan shops can be found equally distributed in commercial and residential areas. Men and women from all walks of life consume paan, and growing up in Karachi means that one is likely to be familiar with pan and the culture around it. I first experienced paan at the age of thirteen, at Tahir Paan shop in Khayaban-e-Badr, Defence. Ever since then I have enthusiastically enjoyed the blast of herbal and earthy flavor. The added sweetness makes this desi delicacy one of the most popular ones in the country.

In many ways, paan culture exists primarily among the middle class and working people. Its low price makes it attainable for anyone. Most paan vendors in the city conduct business in small khokhas and stalls catering to the labour class. However, Paan shops have sprung up in affluent areas like Defence and Clifton. The shop I visited at age thirteen is nothing like pan shops that characterize pan culture all over Karachi. It was sponsored by Pepsi and sold Evian water, and the customers were wealthy residents of Defence. 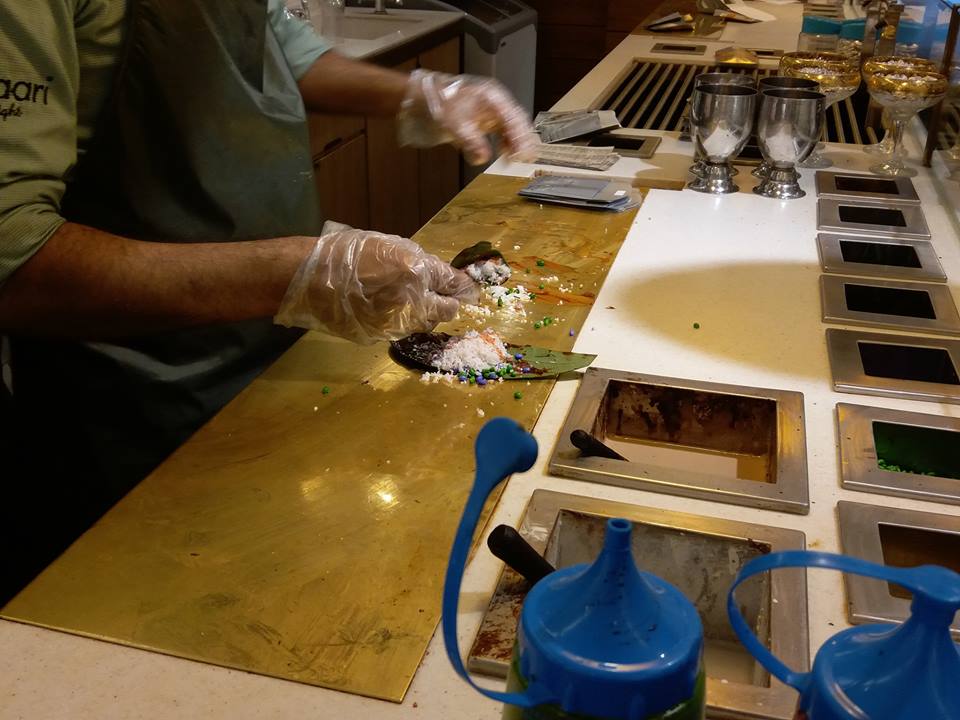 What has happened to pan culture is similar to the rise of upper-class dhaba culture. The process is called gentrification. Cultural products belonging to a minority or subordinate groups are reinvented for affluent communities. No pan shop in the city characterizes this better than Panwari at Khayaban-e-Rahat in Bahadurabad, and my travel there was more out of curiosity than anything else.

Panwari has the aesthetic of a bakery from the outside while the inside looks like a coffee shop. Glass doors lead into an air-conditioned shop where uniformed cashiers with hair nets sell ready-made pan in fancy boxes; hygiene is a priority. There are tables for customers that want to hang out there. The menu is displayed on screens and the variety is more than you’ll find at your local khokha: chocolate paan and Ice Fire paan are just two examples of that. Coffee, juices, and smoothies are also on the menu. To maintain a resemblance to khokhas, Panwari also sells imported cigarettes and lighters. The Panwaari pan prices vary but begin at 120 Rupees.

The Signature Paan, worth 120 Rupees, contains fennel seeds, cardamom and a filigree foil sheet made of silver. When I had it, it brought back memories of the first time I felt the rich blend of mint and other vibrant flavors that draw pan distinct from all other pleasures. The sauces used in making pan make their presence felt and the sharpness never gets old for people that enjoy chewing it.

However, one can easily find Paan just as, if not more so, delicious for 40 Rupees in paan shops at Boat Basin. Does it really make sense for paan, a common indulgence for wage laborers, to be turned into a luxury? Panwari is an attempt to create a high culture around Paan but the pricing alone excludes regular consumers.

Paan culture continues to flourish among the masses. Attempts to reinvent paan for wealthier communities is rather unnecessary. Food street,s like Boat Basin, have many paan vendors selling paan at a fraction of the price.

Most research shows a rising trend in the consumption of pan. That has not been without consequences because consumption of pan, particularly with tobacco, can have adverse impacts on health including an increased risk of cancer. Information about these adverse effects should be disseminated, preferably by the government, so that our citizens make the decision to indulge in paan with full knowledge of the trade-off they are making in terms of their health.

Health risk or not, though, Karachi is still chewing and it doesn’t seem ready to spit any time soon.