So P.F. Chang’s has opened up shop in Lahore. You’re probably wondering what you’re missing out on, even if you’ve already been to one of their other 260 locations — just like I was. The short answer? Not a whole bunch. The long answer? I thought you’d never ask. Let me walk you through our tasting experience.

Charcoal + Gravel was invited to a food tasting hosted at P.F. Chang’s on MM Alam Road, Lahore, last Friday. An entire lobby full of the movers and shakers of Lahore’s blogging scene greeted us, and I knew that P.F. Chang’s Lahore would have to bring its A-game to the table. Though P.F. Chang’s Lahore prices itself similar to their international counterparts, this review will ignore price.

The restaurant screamed Asian funk. I’m a big fan of open plans and family style dining anyway, so I’ll definitely say that P.F. Chang’s will add a new dimension to Asian dining in Lahore. It was decked out, bustling with waitstaff and event organizers.

Chef Rigoberto Rubalcava, P.F. Chang’s oldest employee was there to walk us through the prearranged courses, along with the region’s brand manager and key investors. Here’s the thing about bloggers, and excited people in general: they’re f***ing loud. We had a hard time understanding the walkthrough, and it was not because of a lack of effort on the management’s part. There were several times Chef Rigo had to stop mid-sentence because the crowd around him was so damn loud.

My experience was mostly positive. Here’s the rundown of the P.F. Chang’s Lahore menu:

There are so many textures and consistencies going on here at the same time it’s actually kind of… wow. Crisp iceberg lettuce and crispy rice sticks served as a supple bed for wok-seared water chestnuts, mushrooms, and chicken. Absolutely delicious. Here it’s all about balancing savory with sweet, soft with the firm. I really enjoyed this starter, even though I think the lettuce wraps at Rivoli take the cake.

You may be asking yourself what the big deal is. Dynamite Shrimp is just like Wasabi Prawns or Rock Shrimp Tempura, right? Wrong. Spun in a smoky, spicy sauce, these battered shrimp have one more trick in the bag: chipotle peppers. And it’s as simple as that; you have yourself an all-star appetizer. P.F. Chang’s spin on battered shrimp has made it the most ordered starter on the menu. Respect. 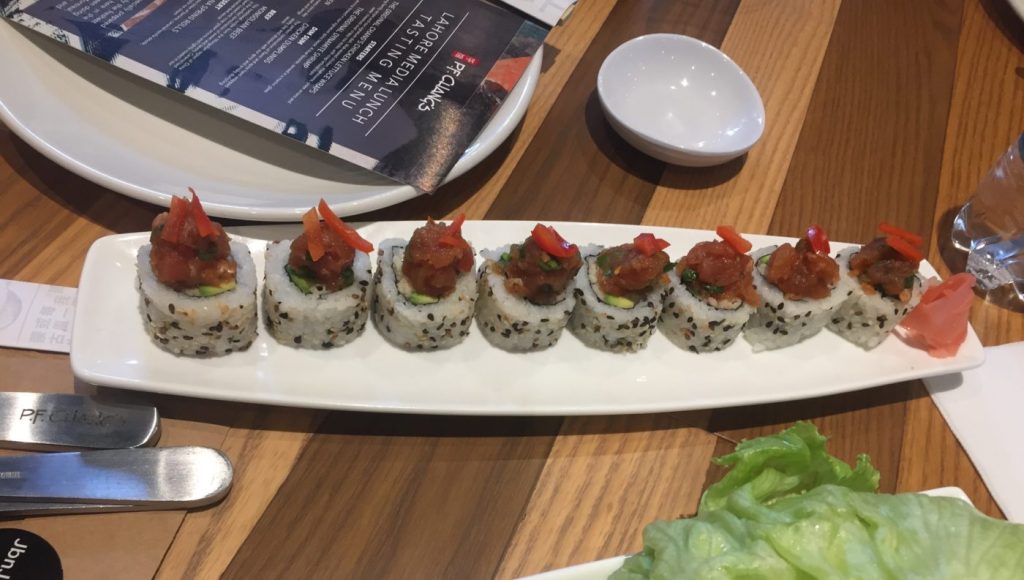 Sushi at an American-style Chinese restaurant would usually send me guffawing in the opposite direction. Not this one. Chilled spicy tuna sat atop avocado, cucumbers, and serrano peppers. It was firm but soft, savory but with a nice kick. Overall, a pleasant fusion take on an overdone roll.

For me, there’s only one way to do dumplings: shrimp. The chicken dumplings looked really, really good, to their credit, but the ‘spicy and smoky’ dumpling sauce was neither. The chicken was bland bland bland, and for good reason; getting any external flavor in the dumpling filling is damn near impossible. No real fat, you see? I simply found the dumplings to be substandard, despite their appearance. That’s the last time I’ll be tasting these, so I’m happy regardless. PASS.

The main event! Beef caramelized with soy tossed around with spring onions. Soft and absolutely succulent, this really does change the game. The wok does its magic, and I’m not hyper-analyzing something that is already perfect. My only complaint? I wanted more.

There was speculation that the Mongolian Beef could have tasted better than other alternatives because of P.F. Chang’s Farm to Wok policy.  Farm to Wok? Not really a thing here… yet. P.F. Chang’s has not brought this policy into Pakistan yet, and understandably so; sourcing consistently good, hyperlocal ingredients in Pakistan is a tricky task. Gotta pick your battles!

The Mongolian Beef will undoubtedly be one of the most ordered entrees at P.F. Chang’s Lahore. Pair it up with rice or have it on its own; there’s really no screwing up here.

While the Spicy Green/French Beans were not spicy at all, they did have something killer going on for themselves: texture. They had a snap to them, much like the water chestnuts in the lettuce wraps, but were a bit more complex in flavor. Loaded with garlic and remnants of other cooking glazes, they were extremely savory and demanded to be mixed up with any and all of your entrees. A no-brainer side.

I was majorly disappointed by Chang’s Spicy Chicken. This is supposed to be a signature dish, so I can’t really dismiss it as something experimental. One would expect that something that is signature has been tried, tested, and replicated in several markets. For starters, it was not spicy, at all and I’m not even downplaying this one. It was syrupy sweet, and not much else. Maybe a bit of sour in there. I wasn’t going to waste calories on this and neither should you.

This particular item wasn’t listed on the printed out pre-set menu that had been placed in front of us so it was a nice little surprise. This is where the smokey wok flavor shone brighter than ever. The vegetables had enough bite to them for it to stand out as a fresh and light main, the signature sauce did the trick as well. The beef was a little tough but the overall flavors of the lo mein made it easier to overlook this misstep.

Sounds like a great idea, right? I thought so too. These banana fritters were supposed to come with coconut-pineapple ice cream but came with a vanilla bean ice cream that was, FAR too vanilla-y. Despite my utter contempt for bananas, I dug into the fritters out of a misplaced sense of journalistic duty. Biting into the cinnamon-heavy wonton wrapping my mouth was flooded with banana mush. There wasn’t much happening here to excite me so this is definitely not a dessert I’d recommend.

The tasting allowed the team behind P.F. Chang’s to interact with its potential customers as well as share the vision behind this venture. The menu was well curated and it wouldn’t be wrong to call their tasting a success. For those of you who have tried P. F. Chang’s, you can expect a standardized and consistent experience. For those who might consider Tierra Nuestra innovative, how about you check out P.F. Chang’s instead.