A month out of college and back in Lahore, I felt compelled to engage with the ‘arts and culture’ in the city. I asked Aiman to accompany me to a dance and multilingual spoken word performance with me. It was by the famous Karachi-based artist, Sohaee Abroo. In an effort to assert my, recently happened upon, adulthood, I insisted on driving us to the seemingly obscure Model Town venue. And it came as no surprise to either of us that we arrived at Olomopolo late and flustered.

Olomopolo Media is an arts management and entertainment company that’s making big waves in the art circuit, within Lahore. We ventured out to their office in Muslim Town, to explore the spirit behind the venture.

Were we at the right place though? Google Maps had led us to a very average-looking house. But apparently, that was exactly where we were meant to be. We were asked to remove our shoes and ushered into a small room packed with some fifty people. It could have been my mother’s living room. They were all sitting on cushions on the floor; oddly at ease. You do not often find yourself in intimate spaces with strangers in Lahore like this – at least not without a marriage certificate involved. However, when Suhaee began moving across the front of the room, I felt there could have been no better setting for her graceful movements, and her calm, sometimes faltering voice. The show explored her many overlapping, sometimes conflicting identities, and the support and adulation she received from the audience made me feel, surprisingly, at home. 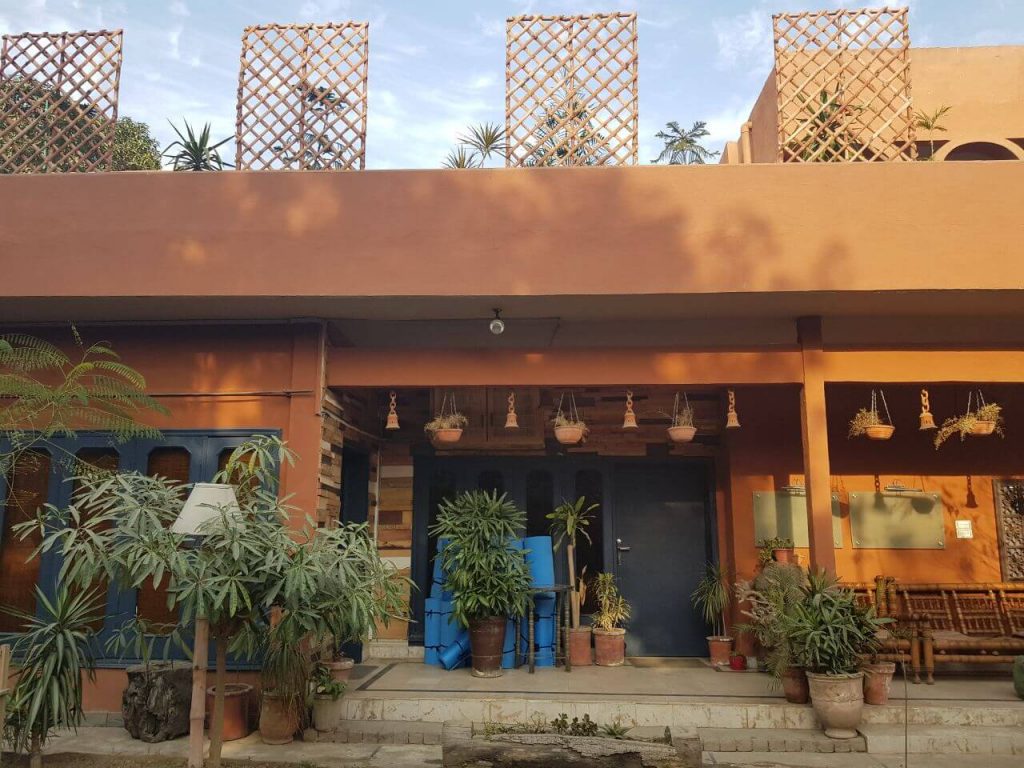 Half a year (and half a dozen trips to Olo) later, I got the opportunity to sit down with two of the women who helped start it. Iram Sana and Kanwal Khoosat had decided to put together the Weekend Theater Festival with Fyque Nadeem and Vicky Zhuang Yi-Yin four years ago. However, the plans for WTF (hilarious and unfortunate acronym) could not be executed. The camaraderie between the four and the idea behind the festival – to redefine what you could do on a weekend in Lahore – persisted, and so, Olo was born. They originally rented a place in Gulberg and broke down one of the partition walls so they could host events there. “Since then,” Kanwal says, “Olo has grown organically into a place where ideas materialize”.

The team works out two-month calendars. These incorporate signature events like Olo Jams, Open Mic Nights, and Hobnob as well as performances by artists and troupes. Olomopolo as an organization is interested in working with emerging artists regardless of their background or status. ‘If someone has an idea we like, they can have our space and our resources’ says Iram.

In the past, Olo has produced wildly popular plays like Teesri Dhun that chronicled the struggles of the transgender community in Pakistan. They have also hosted the AKS International Minorities Festival. These productions have contributed greatly to the national discourse about marginalized communities in Pakistan. ‘We do plays, not protests on the streets,’ said Kanwal. ‘We look for cerebral reactions, not emotional ones.’ After Kasur’s violent child pornography scandal broke out in 2015, Olo held a talk led by two child psychologists related to the impact of child abuse on victims. However, they consciously organized this session two months after the issue was in the news; only once the media frenzy had died down. The team did this to actually create a space for dialogue that did not sensationalize the subject and disempower victims. 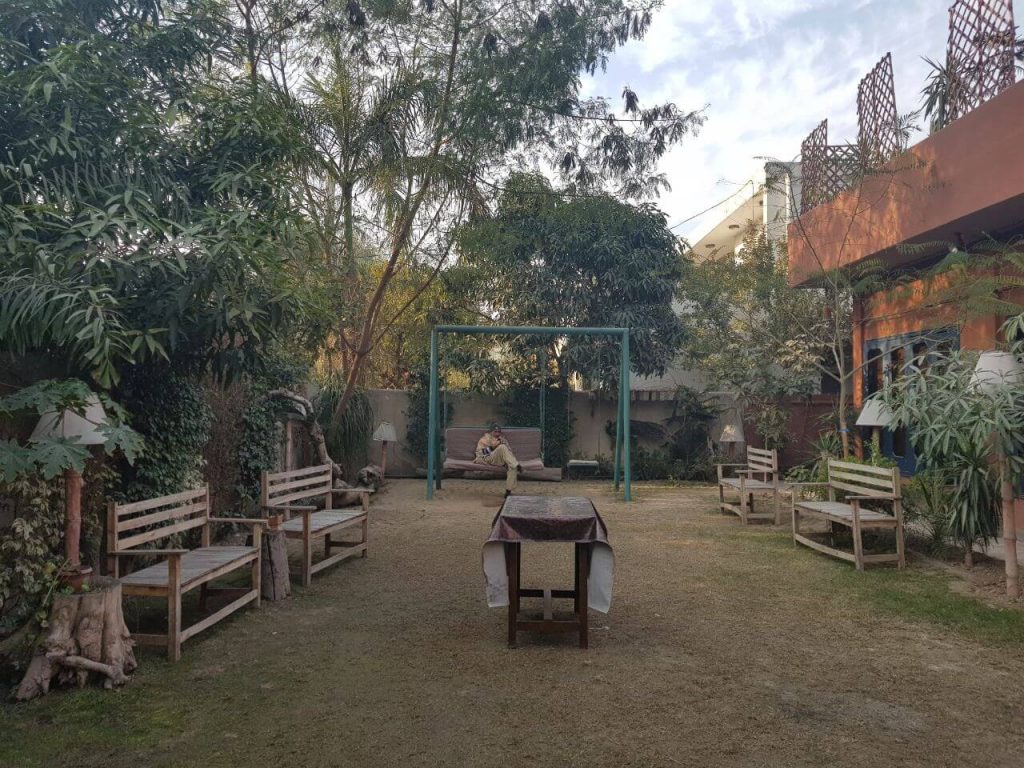 I also had the pleasure of meeting Adnan: a Kathak dancer who was one of Olo’s earliest collaborators. He emphasized the importance of sustainability to the work the organization does. “Artists come and go all the time. But there needs to be a constant place for them. A lot of the time we, as artists, end up doing volunteer work, and what Olo is doing here is also volunteer work. This is how we keep things moving!”, he mused.

Adnan’s word struck a chord with me. I have been reflecting on the importance of Olo as a consistent space for engagement. On a personal level, it has come to define my own relationship with Lahore and its denizens since returning. What I enjoy the most about going to Olo is the warm environment and the accessibility of the people that run it. Even the people who are invited to perform embody these traits. Sitting two feet away from other audience members, Shahzad Ghias Sheikh cheered on the opening-acts before his “Maila” (dirty) stand-up comedy show. When a performer made an off-color joke about the #MeToo movement at a recent ProperGaanda event hosted at Olo, the other comedians could be seen rolling their eyes. Anaya Sheikh used her hilarious set to enlighten the errant young man on the gruesome realities of being a trans-woman in Pakistan. The fact that there is space for such discourse, for unpopular and inconsiderate views to be contested with lived experiences and empathy, is an astounding development; especially in a city and a culture where people avoid uncomfortable conversations and ideological conflict at all costs. 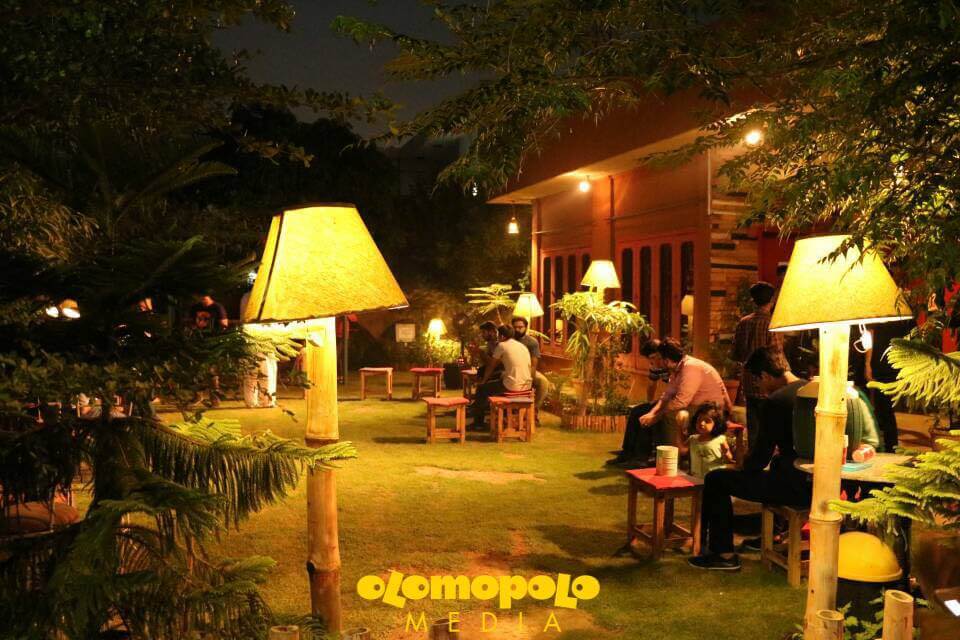 As much as I love this place, one of the things that have always come up in my conversations with my friends about Olo is the homogeneity of the audience that frequents the space. It usually tends to be young, upper-middle-class, urban youth. I couldn’t help but ask Kanwal about this and I was genuinely surprised that she did not shy away from the matter. She pointed out that the types of events they host and the means through which they advertise them – social media – are often consumed and appreciated by those who are tech-savvy and familiar with the content. That is, of course, a very small subsection of society and not representative of the general population. However, she insists that Olo is a space for everyone and the aim is to make it as inclusive as possible – regardless of socioeconomic background. She also points to how the mission for Olo has always been to cater to the youth and provide exposure to emerging artists which explains their choice of subjects and events, to begin with.

Despite the relatively short period of time since it began, Olomopolo has managed to achieve its goal of providing plenty of options for entertainment and engagement over the weekends, and even some during the week. By most standards, we can easily call it a success. But Kanwal is rather reluctant to accept this praise. ‘We don’t consider ourselves a model of success. We just managed to create a space for ourselves and our work, and we encourage upcoming artists to do the same.’ Perhaps it is this very attitude that explains why I felt so comfortable there even on my first visit. The place and the people who have made it possible have no pretensions about what they do. It is a labor of love and one that they simply wish to share with anyone who walks in through their doors. I honestly cannot imagine Lahore without Olo anymore, and that to me is an ode to its impact and power.

Tags:
Arts and Festivals, For the Squad, Kid-Friendly
Share:
previous article next article