Noori Manzil: Of Shadows and Alleyways

During one of my visits to the Walled City, I met a girl who shared my passion for exploring the city. As grateful as I was to be informed about Noori Manzil, I also slightly regretted it. My friend had praised Noori Manzil’s architectural beauty but had unfortunately left out its rich history in her account to me.

Finding Noori Manzil is tricky, but once you make it past the construction and the winding alleys, the Sikh architecture speaks for itself. Our writer, at least, was shell-shocked. 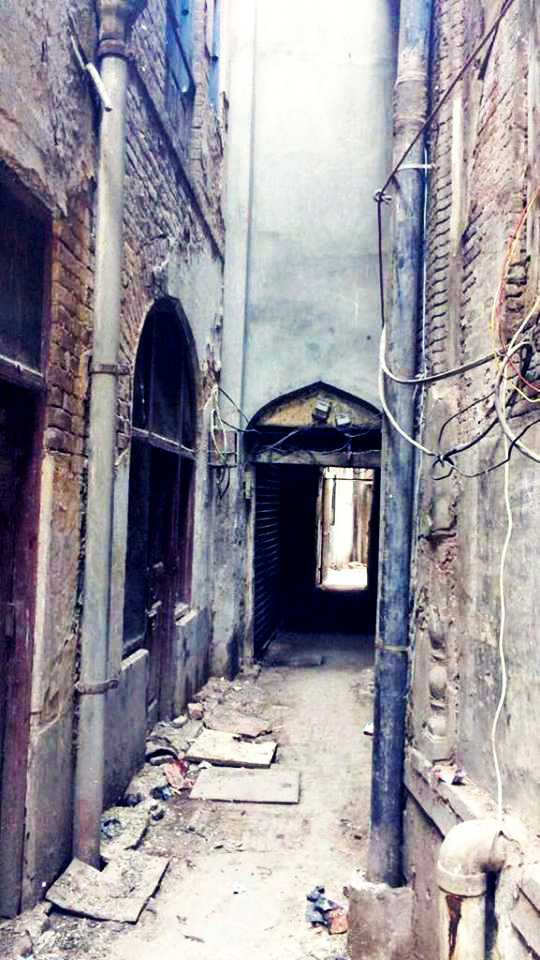 As the sun set on a quiet Sunday evening, my friend and I reached Mohallah Pir Shirazi inside the Lohari gate. Once again, Google Maps was my sole navigator to the ballpark location. However, there was no sign of Noori Manzil once I was in the vicinity. We found ourselves standing in an extremely narrow street, sandwiched between unfinished buildings. We looked around to see if any of the buildings around resembled a haveli. But all we could see were careless piles of cement on the roadside, half constructed buildings, and some mazdoors [construction workers] busy with their work.

Just when I had given up all hope, a small, cracked door leading to a long dark alley caught my gaze. It was the darkest alley I had ever seen. I peeped inside to see a small courtyard at the end of the alley. Lit up by the setting sun, this had to be the way to Noori Manzil. 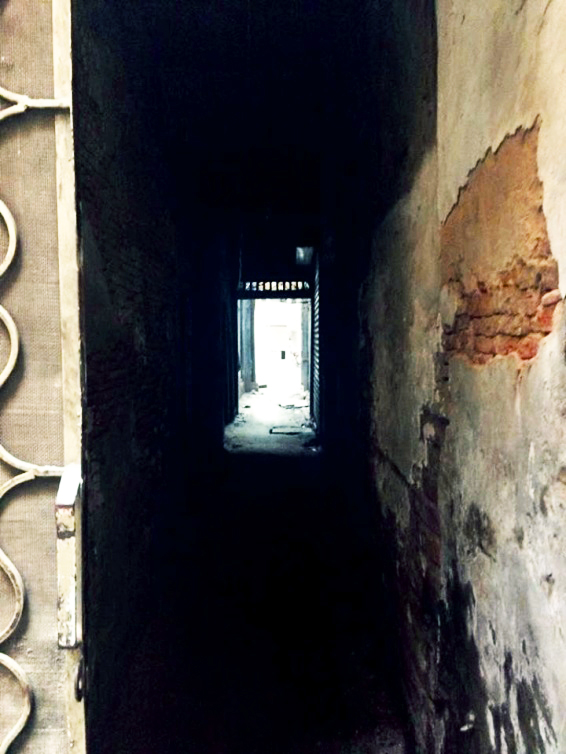 There it was; we were standing inside the vast-roofed courtyard of the majestic Noori Manzil. The magnificent structure that surrounded us existed in complete silence. Chills ran down my spine. A mysterious aura perfumed the air. And as I looked at the haveli head-on, its spellbinding beauty was unmistakable.

Noori Manzil was reminiscent of Sikh architecture, despite its hapless  condition. The broken windows, wooden doors and brick laden walls, all narrated their own story.

Woefully abandoned, the double storey building had cobwebs clinging to the corners of the walls and  on wooden balconies. Dust floated in the air above the broken roof and the scrapped paint revealed the bricks within. Pigeons occupied the broken windows. They fluttered around and cooed, cutting through the deathly silence. 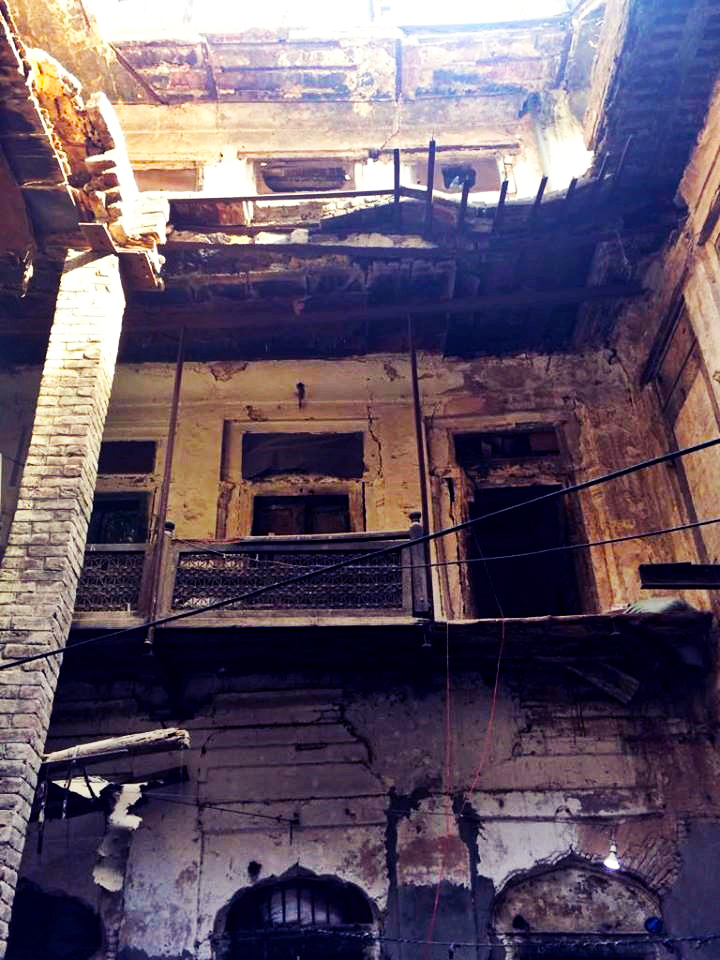 By now, I was scared of the overwhelming structure of the haveli and the uncomfortable silence. However, our curiosity surged with each passing minute, we were compelled to quickly Google Noori Manzil. If you haven’t guessed it yet, this was a bad decision.

Our respective jaws dropped as we skimmed through an article about the history of the haveli. It once housed famous dancing girls and was also built by someone called Poori Bai. I cringed in horror when I read that the haveli is considered to be haunted. The ambient math added up. 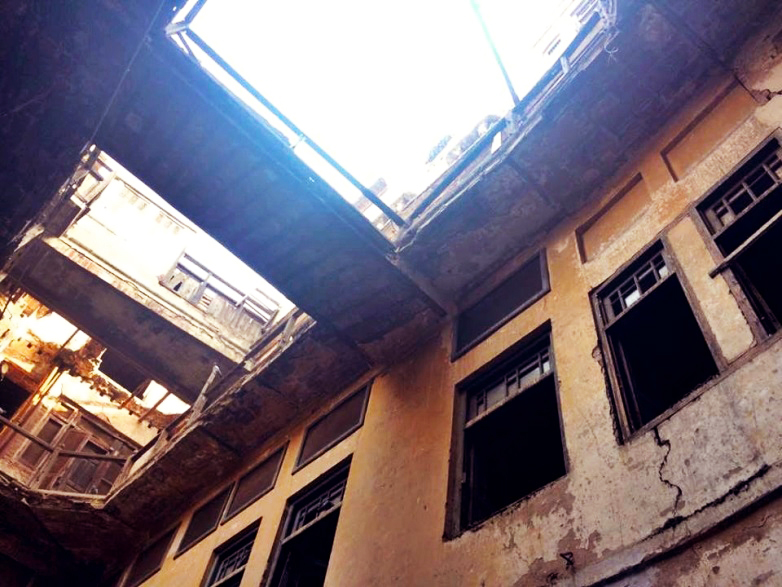 Our research was interrupted by young boy on a bike. He approached us through the dark alley, and before he could utter a word, we asked him about the haveli. He told us that he had come there to visit his grandmother and uncle, who lived on the top floor of one of the portions. Needless to say, we were curious to meet the residents.

He informed us that the structure of the haveli had been deteriorating for years now. Some of the rooms were rented out  by shoemakers or merely used for storage. From time to time, students of architecture often lingered, admiring and photographing the grandiosity of the haveli.

We requested a meeting with his grandmother and a tour of the place. A little reluctant at first, he eventually ran up a shadowy staircase and returned with some keys. We were told that the family was sleeping and would not be able to meet us, nevertheless they had given the boy keys to visit the locked rooms. 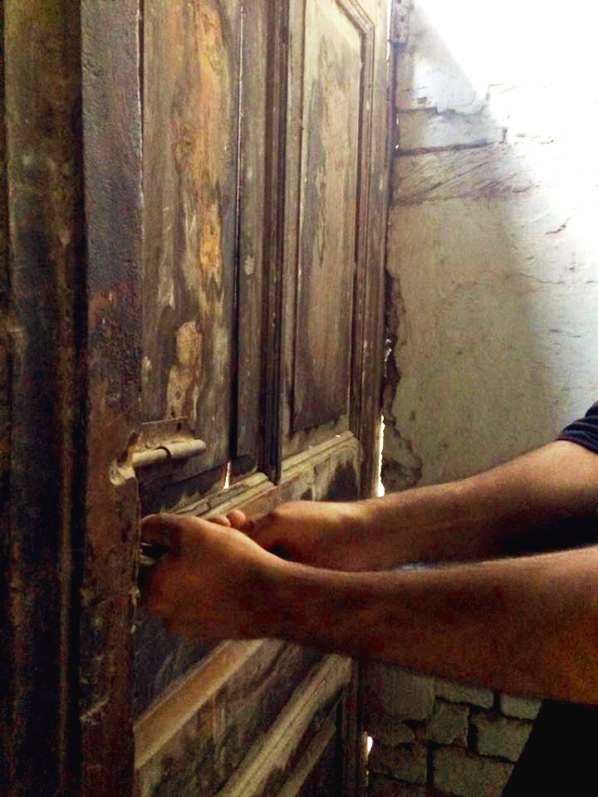 We followed him up a dark and dusty staircase, only to stop midway in front of a door. He struggled with the lock and for a moment, I felt like he might be doing this intentionally, and that the family really didn’t want us wandering around.

Openly disheartened but secretly relieved, I descended the stairs and returned to the courtyard. My fear had not yet subsided and as we followed the boy outside the haveli, I let out an audible sigh of relief felt as if a huge burden had been lifted from my chest. 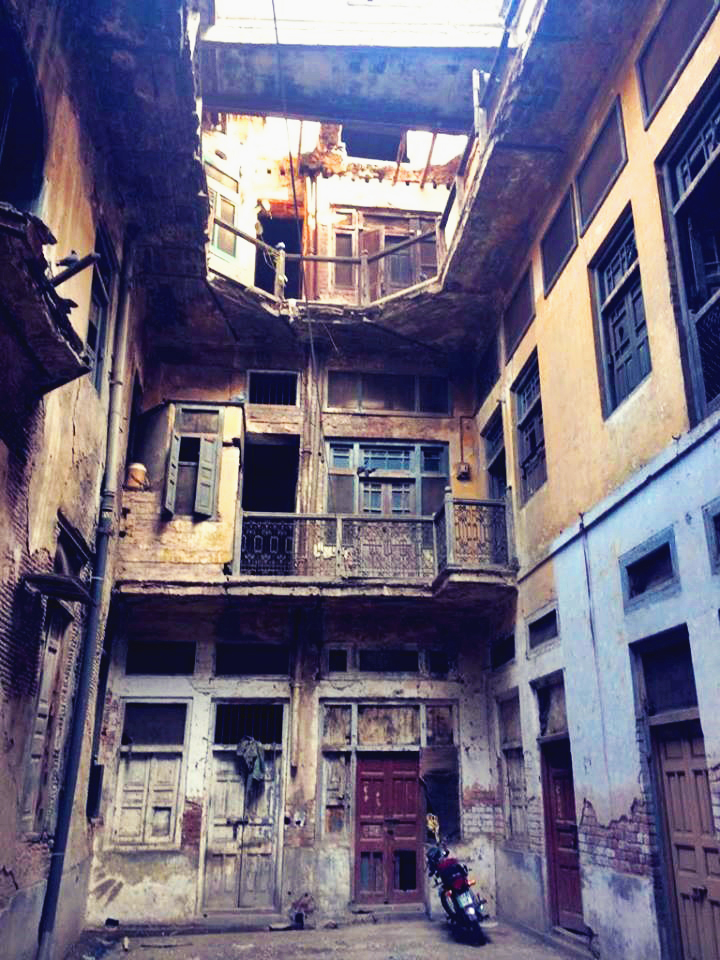 Noori Manzil remains one of the most striking assets of Lahore. Despite its state of neglect, its location submerged amongst numerous buildings serves as its only protection. As a reluctant visitor who randomly came across this splendor, I now wish to return to this haveli and try my luck at unearthing its secrets once more.