It is said that early memories help evoke feelings of groundedness and harmony during the challenging times of adulthood. For me, the Mian Mir Shrine has always been a safe haven marked by the fearless and innocent memories of my childhood. The shrine is the final resting place of one of the most revered Sufi saints of the subcontinent. Some of my earliest memories include running across the breezy courtyards of the shrine.

Hazrat Mir Mohammed Sahib, popularly known as Baba Sain Mian Mir, is said to have been a direct descendant of the esteemed Caliph Umar ibn al-Khattab. His prominence in the Qadri order of Sufism stems from the fact that he founded the Mian Khel branch of it. 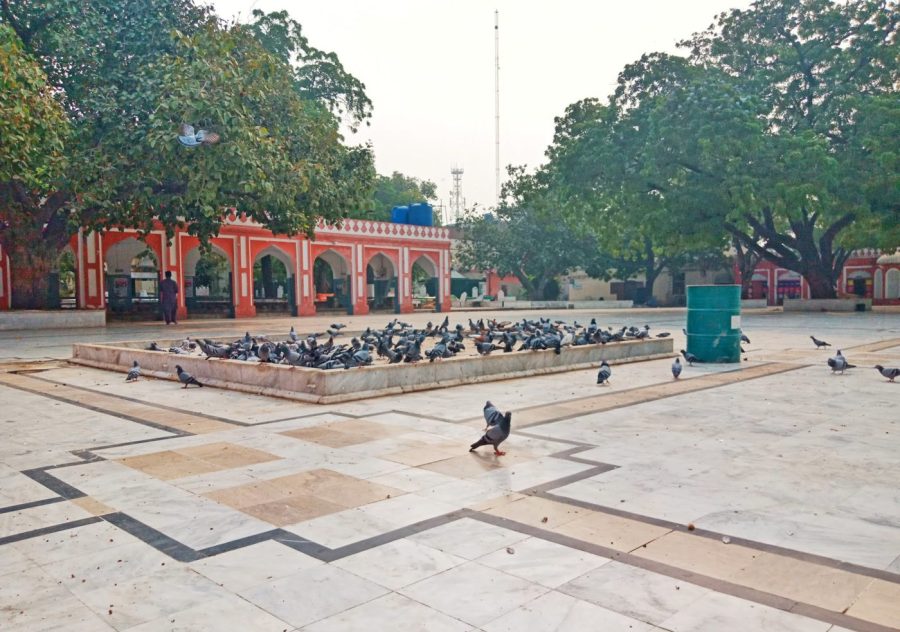 Mian Mir Shrine: The Saint and his Abode

The Mian Mir Shrine offers a sanctuary of peace amidst the noisy and bustling marketplace of Dharmapura. The tomb is surrounded by a rectangular structure that follows classic Mughal aesthetics. Spacious courtyards made with red sandstone are dotted in green by ancient trees. The dome is granite and the eaves mimick a structure termed as chajja, surrounded by an exquisite assortment of precious white marble. 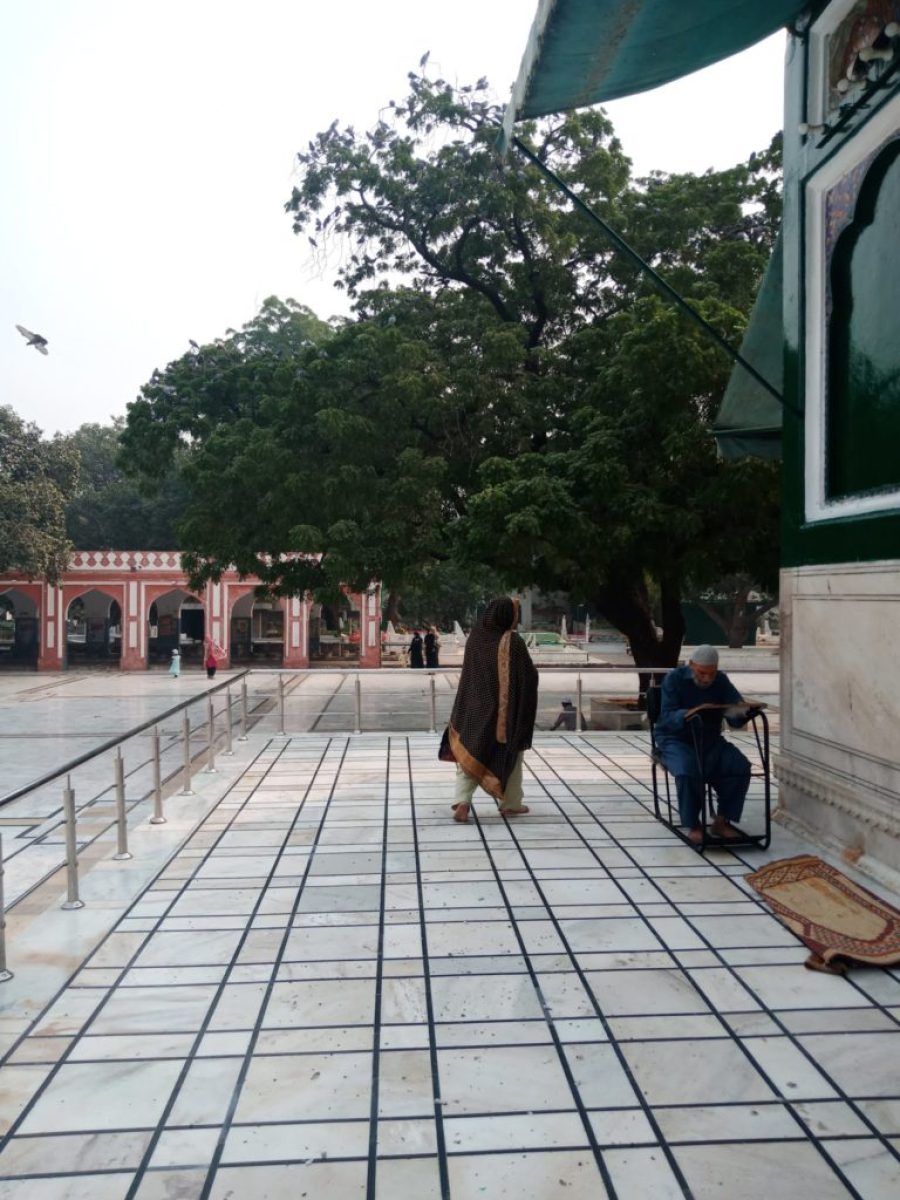 The courtyard hosts many tiny cells and rooms on the eastern and southern end, which uphold the ancient tradition of serving as dwellings for dervishes and travelers. A majestic mosque constructed with pink sandstones stands gloriously towards the western side of the courtyard. I adore the freshness of the air and exotic species of pigeons flapping their wings as they flutter around the shrine. It offers the perfect expanse to carve out inner peace and connect with the spiritual self. 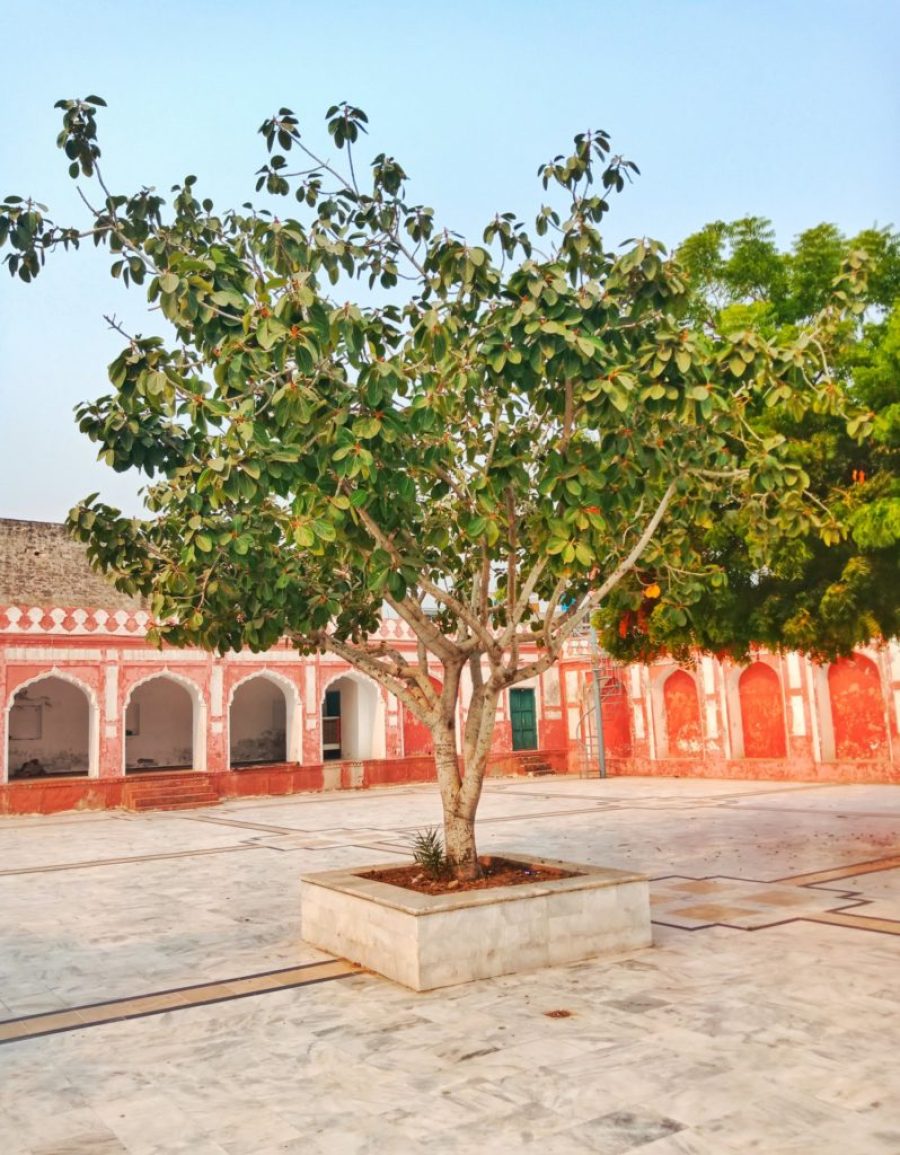 Mian Mir Shrine: The Saint and his Life

Many historians have cited Mian Meer him as the spiritual teacher of Crown Prince Dara Shikoh, it is not entirely true. In reality, he took very few ‘chosen ones’ under his tutelage, of which his own sister, Bibi Jamal Khatun, and Mullah Shah Badakshi are remembered as famous saints. Dara Shikoh was very close to Hazrat Mian Mir and wanted to be accepted into his Sufi order, but he wouldn’t let go of the crown, a decision that cost him both, his life and his spiritual ascension. Hazrat Mian Mir sent him, his wife Nadira and sister Jahan Ara to join the Qadiri order under the tutelage of his student and successor, Mullah Shah Badakshi in Kashmir. 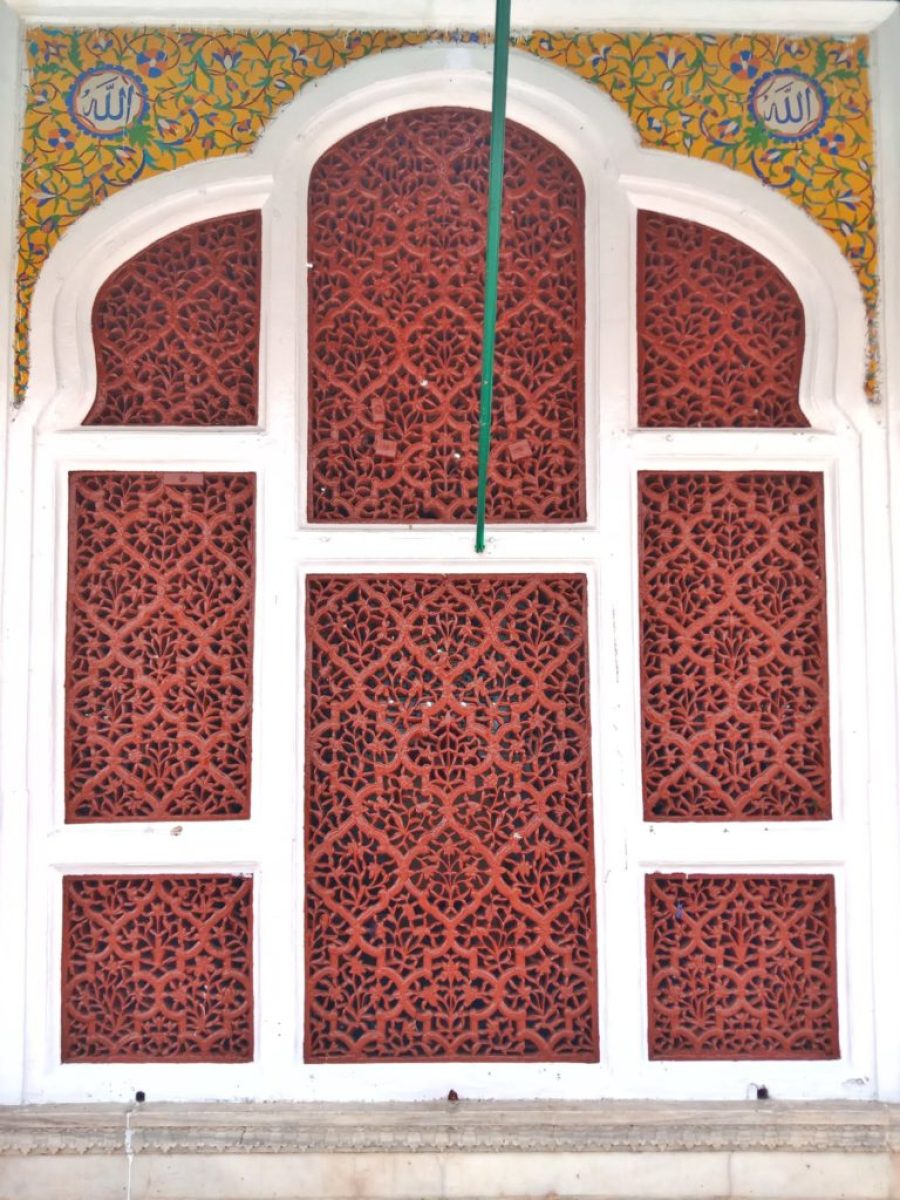 It is said that when crown prince Dara Shikoh fell gravely ill and no remedy seemed to drive away his illness, Shah Jahan was instructed to take him to Hazrat Mian Mir, the greatest Sufi of his time.

In the realm of Ma’arifat, we regard this incident a prelude to serve as an excuse for the meeting between Mian Mir and Dara Shikoh, a union that was destined since the beginning of time. According to the legend, soon as the ailing prince was brought to Mian Mir, he brought him inside his dwelling, offered him a glass of water and caressed his forehead while saying,

“It took you a very long time to find your way here, beloved”. 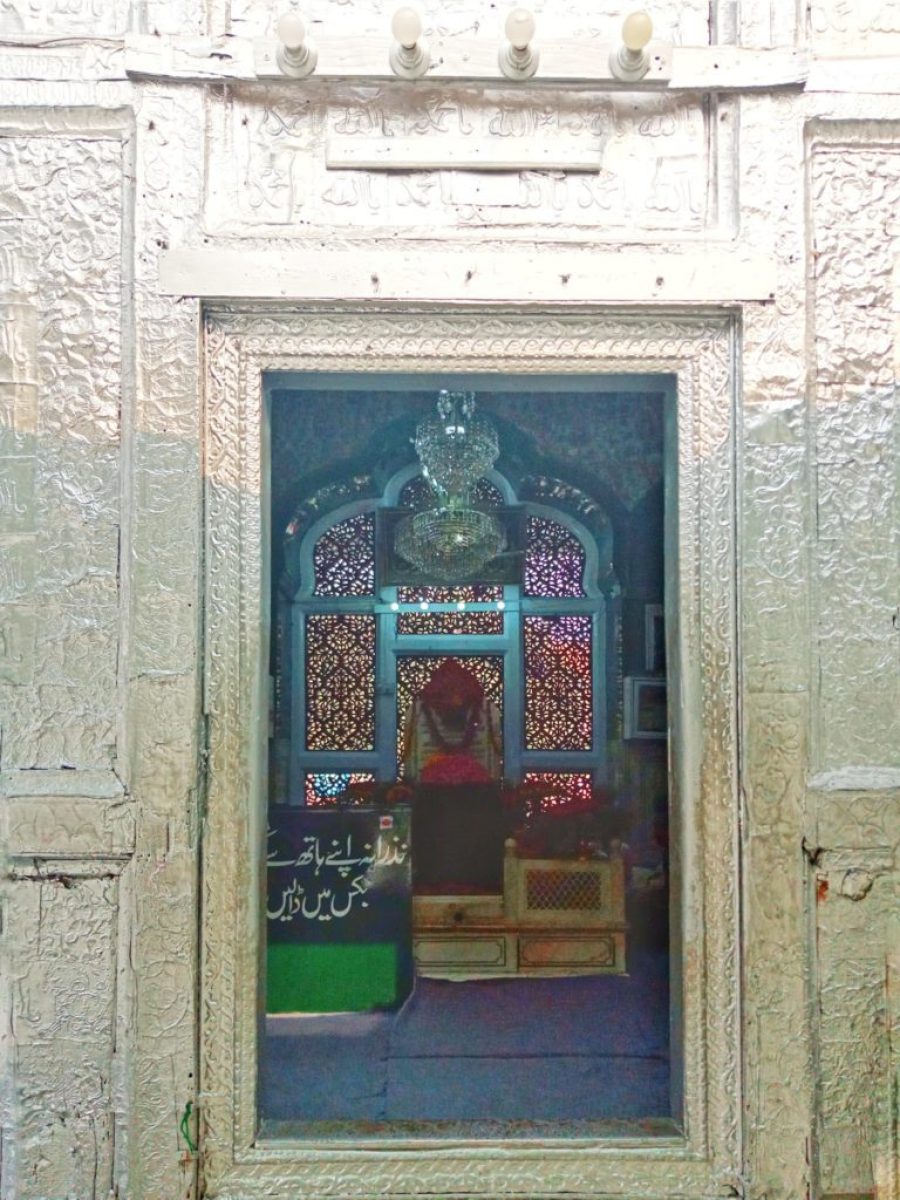 Dara Shikoh was the chosen disciple, the Crown Prince who was born with a passionate predisposition for Sufism and spirituality. He absorbed all the knowledge that the great Sufi had to offer, and also brought his wife, Nadira Banu, and sister, Jahan Ara to study under his tutelage. Dara penned down a great collection of books on Sufism, and his most celebrated work, Sakinatul Aulia, is dedicated to the life and legend of Hazrat Mian Mir.

It is a pity that Dara felt compelled to hold onto his birthright, and against the persistent orders of his spiritual instructor to let go of the crown that he was not even remotely interested in, he went to war with Aurangzeb. 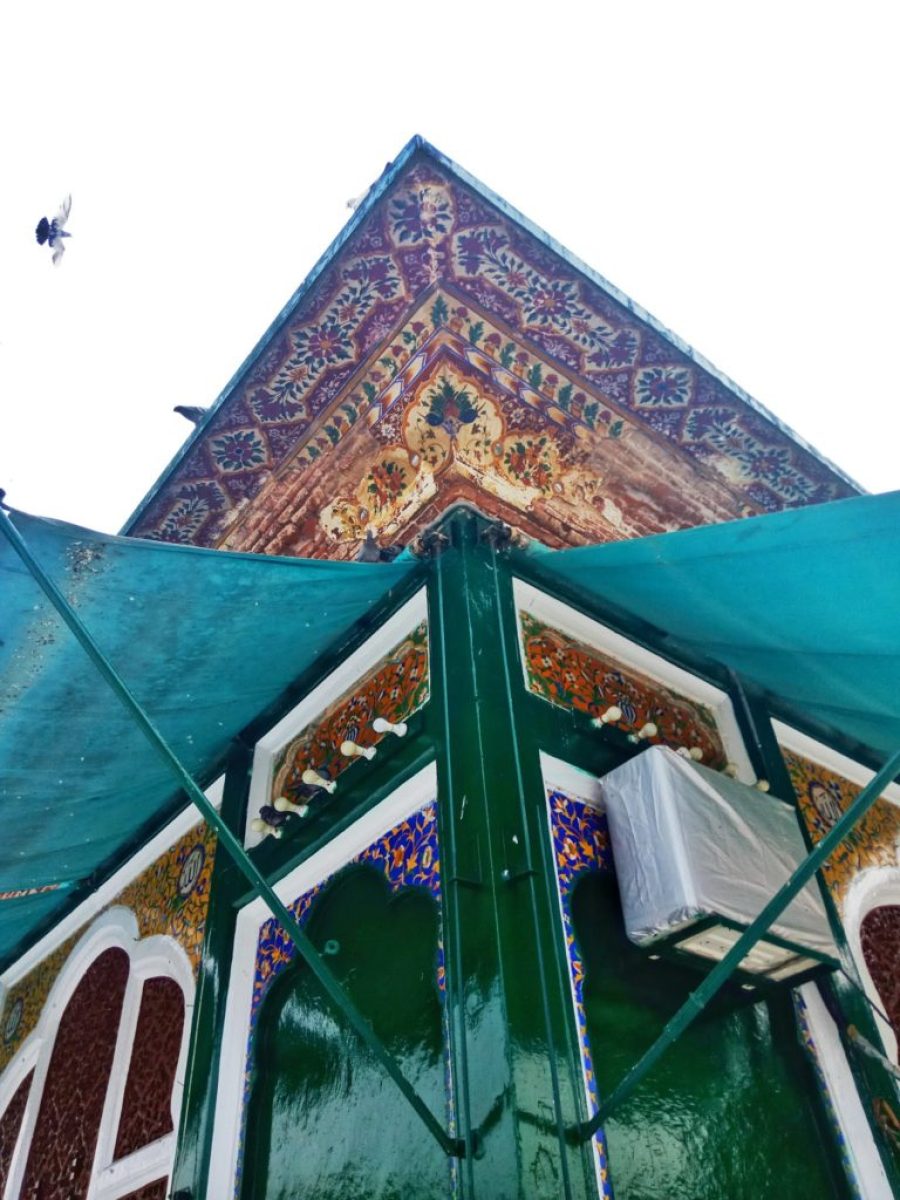 The Place it Holds

Historians reveal that the Mian Mir Shrine was designed and constructed by Dara Shikoh himself. He spent years searching for precious marbles and stones, ordered all the way for Persia. Sadly, he was only able to construct the lower portion of the Mian Mir shrine and the mosque due to the ongoing war with Aurangzeb. After his death, Aurangzeb used all those precious marbles and materials that Dara so lovingly collected for his beloved teacher to build the grand Badshahi Mosque while finishing up the upper portion of the mausoleum with mediocre masonry.

Today, the Mian Mir Shrine stands as a proud and poignant reminder of a Sufi who was a messenger of inter-faith harmony, peaceful co-existence and an unyielding stance against the treachery of selfish rulers. Devotees like me visit the Mian Mir Shrine to bask in the peace and spiritual trance that lingers in the air and nourishes the mind with every passing breath.