March 2018 came at the heels of the 6th edition of Lahore Literary Festival. Mid-month, the 1st Lahore Biennale kicked in. Scattered in between, countless Ajoka, Rafi Peer, and Olomopolo fests took place. Faiz Ghar was nearly always lit. But Mela Chiraghan in its 428th (!!!) installment makes the list above quiver and run for cover.

Translated as The Festival of Lights, this historic celebration finds its roots in the latter half of the Mughal Dynasty. It draws upon the legacy left behind by Madhu Lal Hussain. And it is sustained down the centuries by human devotion, faith and the celebration of pure love. 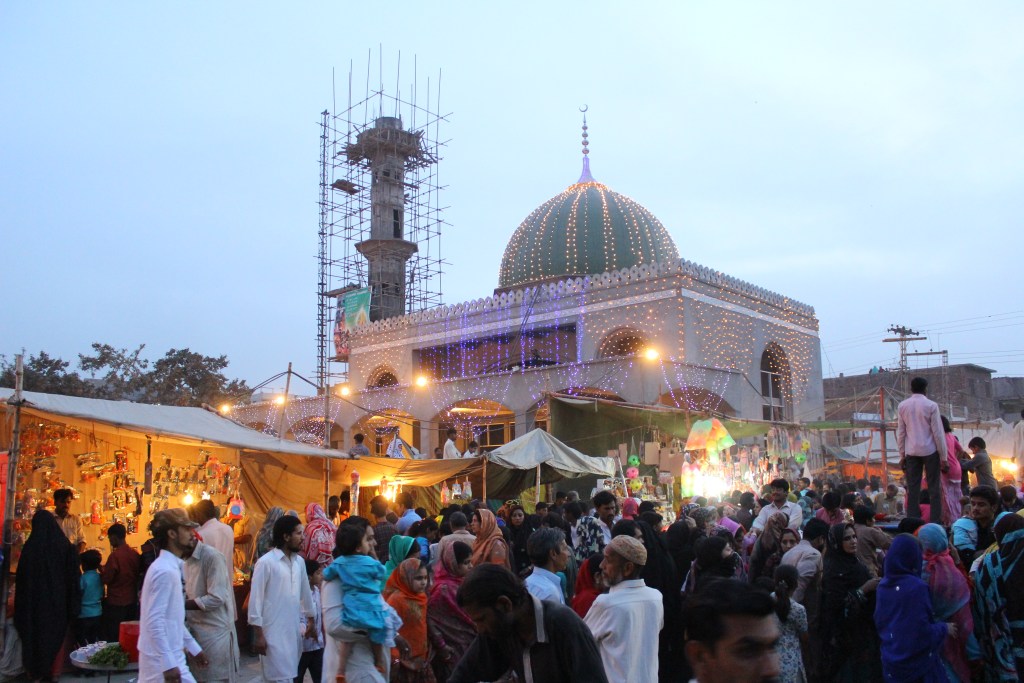 The Careem driver drops us off at an intersection. A fancy heavy-duty suspension bridge and the Grand Trunk Road roar to our left. To our right is the bustling bazaar of Baghbanpura. Remshay and I make an awkward duo. Her backpack and my assortment of colorful polythene bags are too wide for the multiple check-posts and queue-in gates that lead to the event.

Nevertheless, we lift our baggage over our heads, squeeze through the entrance(s) and go through multiple body checks. We are questioned about the large quantity of tea leaves we are carrying with us. Some think it is for the festival. Others look at us as though we’re crazy. Not the first time. On our five kilometer trek towards Mela Chiraghan, we receive multiple phone calls from Zeshan – at least one per KM. To be fair, he’s been waiting a long while to accompany us into the shrine because, well, none of us know how shady it would really be.

So far, though, there’s nothing to be alarmed about. Other than the goats’ heads that stare up at us from street corners. My first instinct is that these have something to do with the festivities. My Meat One and Zenith accustomed brain fails to understand that they are, in fact, on sale outside butchers’ shops. Siri paaye aren’t much without the siri (head). 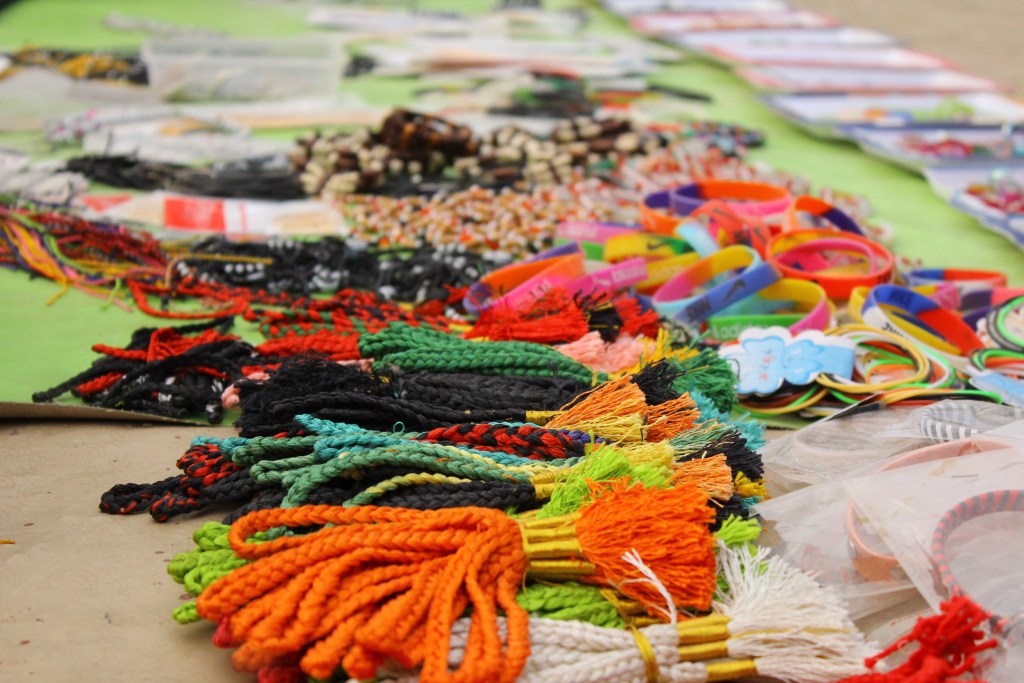 As though echoing my stupidity, Remshay warns me— in all seriousness— to not accept any flowers or sheets from anyone. They could have been magic-ked into ruining my life. As if I need someone’s help in that department. I look at her pointedly till she catches my eye. In a split-second, we are roaring with laughter.

There is an earthy rawness to the air around the festival’s periphery. Maybe it’s fueled by the contents of every other bystander’s smoking pipe. But no, that’s not it. Despite countless security threats, this space feels safe. Safer than we’ve felt at events in Alhamra, being scrutinized for the bags we’re carrying to the way we’re eating our fries. We could trip, fall flat on our face, and no one would blink an eye. After all, hushed whispers aren’t possible in an area where individuals are chanting anthems from every corner.

Just as there has never been a formal invitation to Mela Chiraghan, there is no blacklist.

Then again, four centuries is a long time to educate a community. The outside world, and its tendency to box people up into partisan ideologies is kept at bay. Shah Hussain and Madhu Lal’s cultural frenzy is the only overarching belief: anyone and everyone is welcome. Just as there has never been a formal invitation to Mela Chiraghan, there is no blacklist. Come one, come all, or simply don’t. The individual is of little consequence. We make it to the shrine and can spot Zeshan in the distance— fly-away hair, tripod and camera in hand. He gives us a tour of the space in his signature style: pointing out and identifying objects. When questioned about what a certain group is doing, he shrugs and goes “eh, praying or something”. Big help, Zeshan. Big help. So Remshay and I just roam around on our own. We look at the giant pit of fire, being able to hear its roar from a distance. We make way for a little girl, with a small shoe in her hand and matchsticks in the other. She walks up to the pit, unafraid, lights up the shoe, looks at the sky and hurls it into the flames. There is so much we want to know, so much we want to ask, but she doesn’t have time for us simpletons. We think against chasing her down. 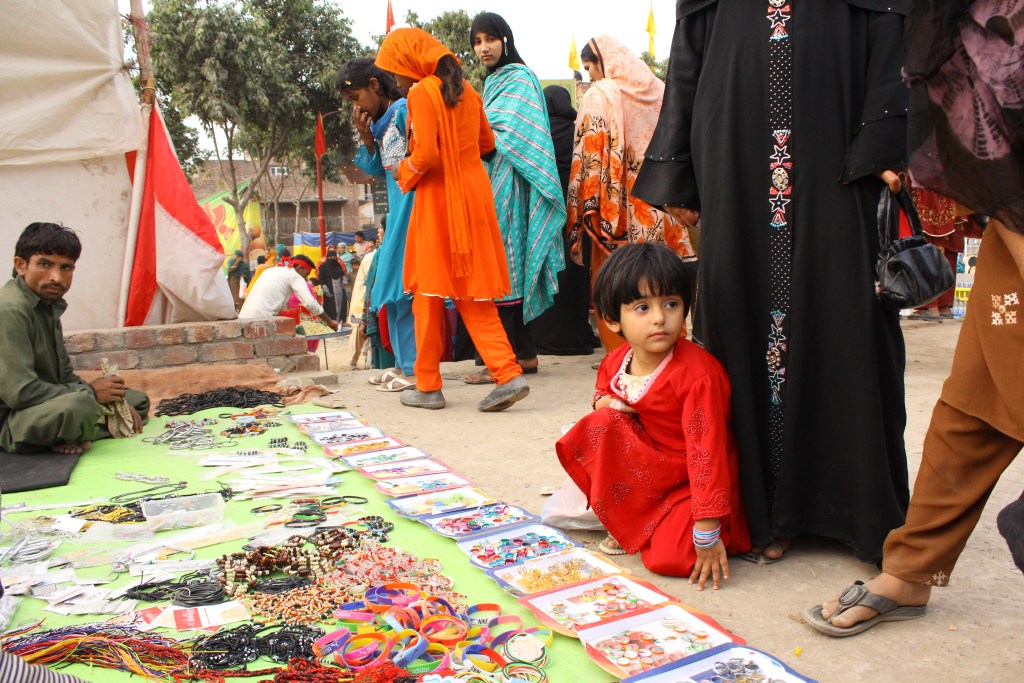 Mela Chiraghan was once referred to as Mela Shalimar, since it would extend beyond the premises of the shrine, towards the neighboring Shalimar Bagh. The Festival of Lights is a tribute to the illuminating kinship between Shah Hussain and Madhu Lal. It wasn’t one of blood, nor of religion or any other social classification. It is one of affection of a grown, learned Muslim who roamed the streets of Lahore, and a young Brahmin boy who defied his privileged status in society. This bond makes them one and they are often confusingly referred to as the same person, Madhu Lal Hussain.

Shah Hussain and Madhu Lal were punk rockers before it was cool.

Shah Hussain and Madhu Lal were punk rockers before it was cool. After all this time, the Mughal Emperor Jehangir and his wife Noor Jehan lie forgotten on one bank of the Ravi, at Shahdara in what was once a grand monument. On the other side, in this modest shrine near Shalimar Bagh, the urs of Madhu Lal Hussain is celebrated without ever demanding any fanfare or loyalty.

We walk behind the shrine, where a number of smaller fires are scattered with small groups of three or four behind them. A man in one corner empties a used can of Kashmir Banaspati into what looks like a karhai. “Food?” Remshay and I echo expectantly. Soon as we reach it, however, it turns out to be a central source for people to get fire from. Zeshan tells us that these communal karhais are put in place to ensure that everyone can keep their fires alight for the three-day festival. It is a sign of devotion. Fire-hazard concerns aside, that sounds beautiful. If only this wasn’t a drone-free zone, the aerial view would have been breathtaking. Right next to this foodless karhai at Mela Chiraghan, two white men – dreadlocks and all – are in conversation with a bearded man. We’re out of earshot, so all I can do is think about this photograph of Robert De Niro chilling in Shangrila, Gilgit as a part of the 1970’s Hippie Trail. 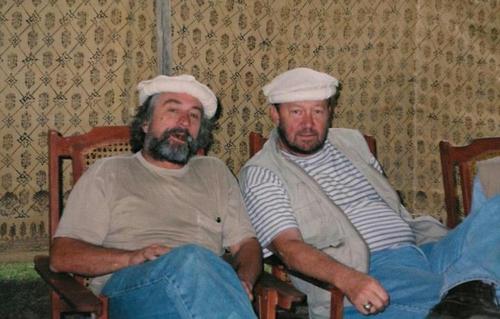 They get up, touch the man’s feet, touch their foreheads, hug him and when they’re out of his sight, hi-five. It’s strange, but they seem more at home at this mela than we could ever be.

Tags:
A Page out of History, Arts and Festivals, For the Squad, Kid-Friendly
Share: