4 Ways to Meat the Cheese

In a city that thrives off food as a primary social activity, Meat the Cheese should technically thrive too. As a community, we’re protein lovers, so it’s hard to miss the mark with a good burger or steak in Lahore. At Meat the Cheese, we met the meat and the cheese four different ways following our appetizers. I’d recommend two.

We over ordered because we were hungry, so please bear with me.

The Wicked Mushrooms, truth be told, were not very wicked. We were told that these were deep fried mushrooms stuffed with cheese and beef pepperoni, served with honey mustard. We found no real beef or beef pepperoni in there, though there was plenty of cheese. Whether this was cream cheese or ricotta, that much was unclear. While certainly not bad, the separation between the batter and the mushroom because of moisture was a bit… odd. I wouldn’t order this again, though it was worth a shot.

The Chili Poppers were packed with some serious heat. Stuffed with cheese and still seeded, the green chilies were not joking around. The only suggestion for these? Vary the textures; smooth cheese should be contrasted with something with a less gooey texture.

The Life as a Wing starter was a winner winner chicken dinner. Coated in a smoky, complex, tamarind sauce, these wings were as innovative as they were delicious. Don’t knock it till you try it. Easily my appetizer of choice. 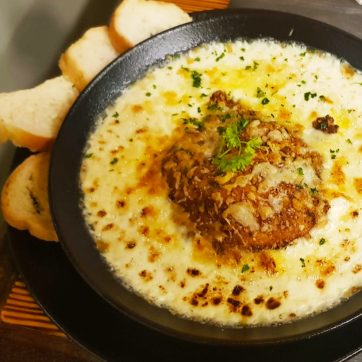 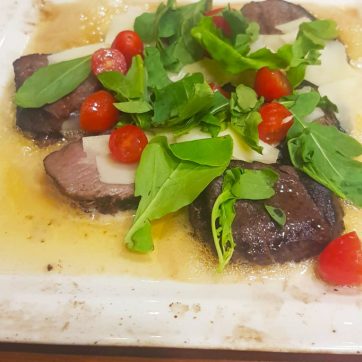 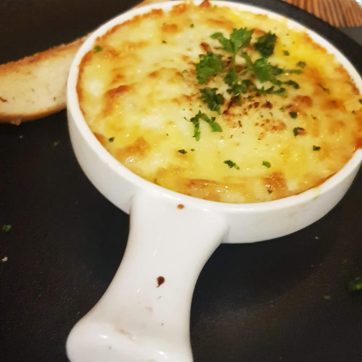 Our (their) Deep Fried Pride was basically deep fried chicken, stuffed with 3 types of cheese, floating in a “bay of cheese” with added Parmesan. That’s some heavy sh*t mind you. Delightfully mild, silky, and absolutely slathered in cheese, the crispiness of the chicken knew no bounds. Loved across the table, and then some. This is ONE of the ways you should be meating the cheese at Meat the Cheese.

The Finest Cut steak was what I had been waiting for all night. Half done in the kitchen and finished off on the table, it was a miracle I managed to wait till our server was done pouring the browned butter and dressing the entrecote style cuts of steak. The steak was a Chateaubriand, by the way, served with fresh rocket, cherry tomatoes, a hearty dosage of Parmesan shavings, and the browned butter that added to the crust. Very, very tender, the steak was a bit under-salted (fixed in a jiffy). We took our time with this one and promised to return for this particular entree again. This is the second and final way to meat the cheese at Meat the Cheese.

The Tongue Twister was basically spaghetti with mozzarella stuffed beef meatballs, baked like a lasagne, complete with a cheese crust. Sound epic right? Unfortunately, we found it to be extremely bland, and a bite into the meatballs made sure it was sent back to the kitchen; the meatballs were smelly, perhaps because of improper storage, or maybe they were just past their prime. To their credit, the serving staff was extremely apologetic and offered us a free dessert as compensation. A bit of courtesy goes a long way. 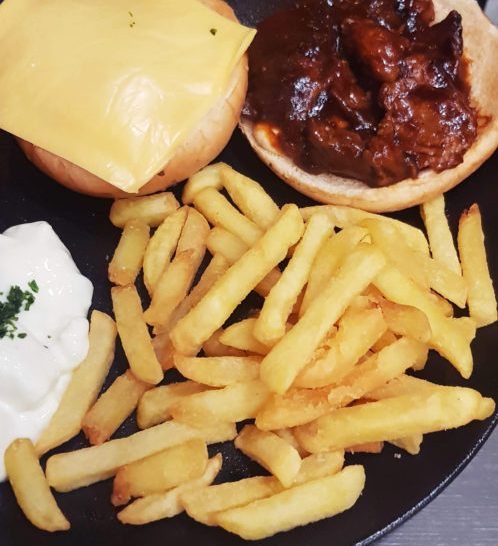 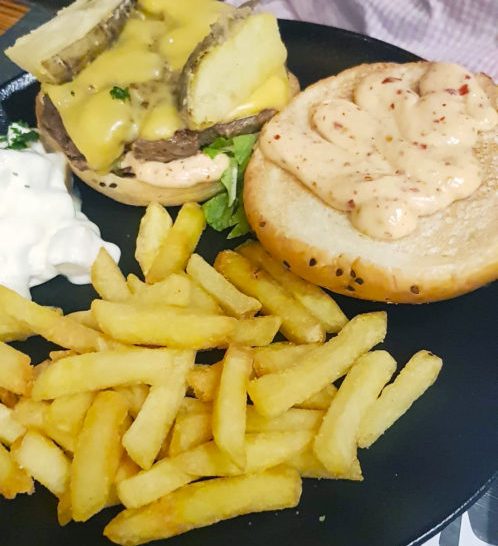 Though I was more inclined to order steak cuts, others wanted to test out the burger. The Chipotle Bee-Eff-Eff burger was first on the burger menu, and supposedly a good choice. We were told that this was indeed a steak burger, and we should not fret. So fret, we did not. Till we actually tried it. The chipotle sauce was more like garlic mayo with sundried tomatoes blended into it, and the patty was just plain mushy. It could not hold its own, and I was unfortunately reminded of a very weary, very dreary shami kebab. The buns? Excellent. Meat the Cheese isn’t replacing my go-to burger destinations anytime soon. 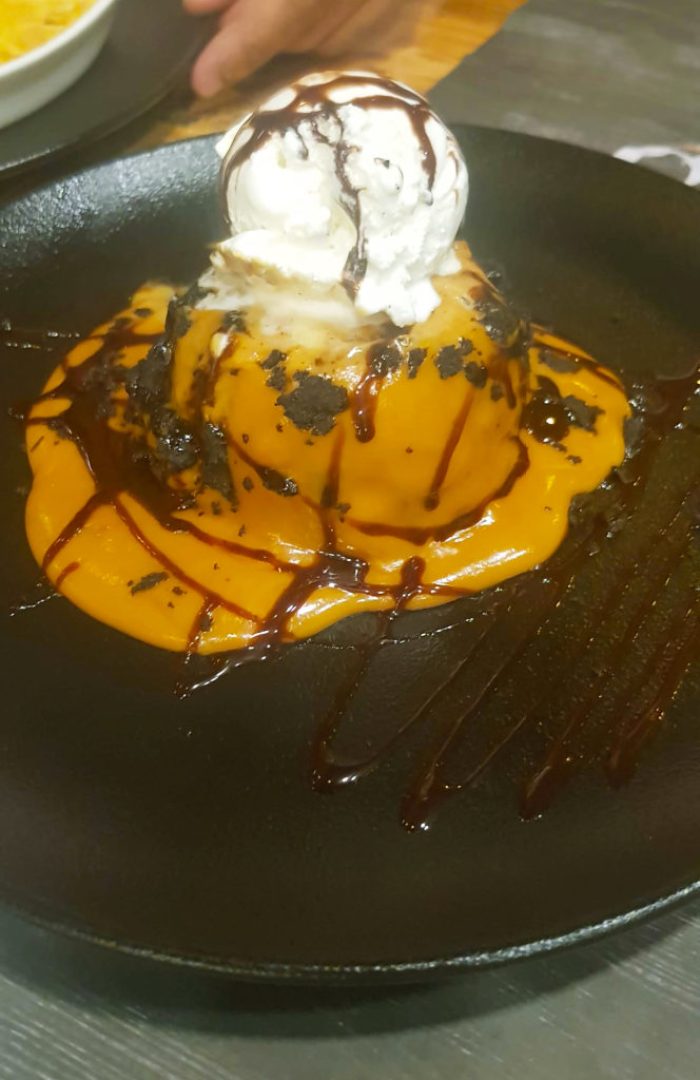 There are two types of people: those that take their dessert seriously and those who settle for a molten lava cake when offered dessert. Every friend’s circle has a molten lava enthusiast, therefore we had to order The Melting Point for our table. There was no hiding the fact that cocoa powder had been replaced by Ovaltine malt powder in this rendition. We whined and we scoffed but we wiped our plate clean. It wasn’t entirely terrible, but Ovaltine rarely is.

The good people at Meat the Cheese wanted to make up for The Meatball Tragedy of 2018 by hooking us up with a Say Creme Brulee on the house. Technically, the creme brulee was perfectly executed. The pudding portion was rich and trembling, the broiled sugar was the perfect shade of gold and angels sang when we cracked it open. However, I’m just not that into custardy desserts and a spoonful was enough to satiate my curiosity. Next.

To its credit, The Butter Half was the best looking dessert on our table that night. To be honest, it didn’t have much competition. The pudding was topped with a scoop of Hico vanilla ice cream, which is always a winner, and a salted caramel sauce. I’ve got beef with bread pudding particularly because of its texture, or complete lack thereof. It’s an eggy mush and doesn’t do much for me, but my companions alleged that it was an amazing bread pudding. Try it out for yourself, maybe you’re into that kinda stuff.

Meat the Cheese was clean, extremely spacious, and had some swanky tunes playing at the back. There was no clutter, be it tables or congregations of staff in awkward corners; sh*t be airy, man. The staff was extremely knowledgeable about the menu, which is a treat to see in Pakistan. Polite and accommodating even when we joked around, they ensured we were happy with our predicament, even though it was not ALL positive.