McDonald’s Anday Wala Burger Is Worth Your Time

I’m an old soul and the only trends I keep up with are memes. I am also a creature of habit and comfort. I firmly believe that classics should not be messed with. Whether it’s music or adaptations of movies and books, and most of all, food. There’s a reason why Silver Spoon, Super Burgers and the lot have stood the test of time in Karachi. You don’t mess with the best. Finito. So does this review of McDonald’s Anday Wala Burger make me a hypocrite?

How could I sign up for this travesty? How could I sink to the lowest of the low and partake in the gross commercialization of our culture, our traditions and all that is holy? Can I ever be forgiven?

Yes, all of these thoughts went through my head as I stood in line ordering the McDonald’s Anday Wala Burger. But let’s put things into perspective.

For those who do not know what an anday wala burger is, allow me to educate you. It is the pinnacle of street food perfection. An anday(egg) wala burger contains three basic ingredients: a desi omelet, a kebab, and a spicy sour chutney. Raw vegetables add a bit of crunch, but the three primary ingredients are what make this truly desi snack. The kebab can be meat, lentil or potato, depending on the establishment you’re dining at and what they prefer. Each of these options is delicious in its own way. Although the meat kebab is the most famous, I go for lentil when I’m in the mood for something light and potato when I want a quick carb-fix.

The anday wala burger recipe is easy enough, but it’s hard to nail. It’s all about instinct. The soft, slightly crisp outer bun, the sweet inner bread, that first taste of green chutney, followed by a shock of patty which is then tapered off with the fluffy egg base. We are talking about incredible, outstanding, effervescent perfection. Some call it a bun kabab, some call it an anda tikki, some call it and anday wala burger.

A rose by any other name… as long as you don’t call it an egg burger. 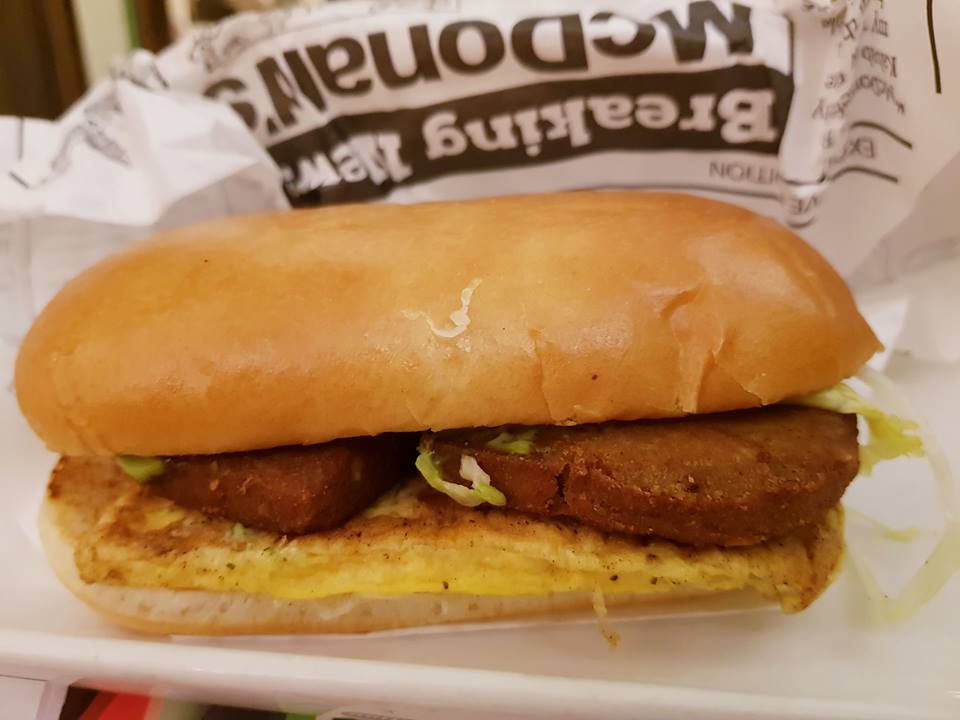 The Walk of Shame

I’ll admit, I went into McDonald’s with zero expectations. I was there for the novelty but had no intention of buying into this gentrification by a major United States fast food chain. I stood in line with a steely demeanor and coldly asked the lady at the counter for the Mcdonald’s Anday Wala Burger. It was handed to me in 3 minutes, wrapped in a newspaper printed wax paper. I snobbishly sneer at the obvious homage to my dear thailay walas (street vendors). As I stepped back into the car I turned to my husband and asked him to take the first brave bite. This is kind of why I married him anyway.

When I asked him how it was he responded with an eloquent “Its not bad dude”. I took a hesitant bite and I had to agree. I was shocked, amazed and slightly appalled. As I told my editor later that evening, it was as if a cheeseburger married an anda bun kebab and birthed it. Super hygienic with desi swag. My editor asked me to try the McDonald’s Anday Wala Burger so as to spare her tastebuds from any unnecessary surprises and tried it a day later in Lahore on my recommendation. She loved it.

Is it good? Yes. The patty had a nice spicy kick to, the egg was soft but slightly bland, the green chutney was surprisingly tangy, and the bun did a good job of tying the whole thing together. But be warned; this is not your local anday wala burger. It’s clean, fast, and while it hits some of those high notes, it is not the same. I would eat it again, but it is not the burger I would eat if I wanted an anday wala burger. After all, the real deal is the Pakistani rendition. It’s like wanting to watch Guns N Roses and buying tickets to a tribute band performance instead. Good attempt though.

And so, I leave you all with this song dedicated to my anday wala burger:

“I’ll never find anyone to replace you
Guess I’ll have to make it through, this time, oh this time
Without you.”