Lakshmi Mansion owes its historical significance to the prominent Urdu writer Saadat Hassan Manto, who resided here. Manto needs no introduction, one need not be familiar with Urdu literature to have heard his name. He wrote stories of unprecedented humanistic appeal, especially about the traumatic events of partition. In his writings, he unveils the social maladies of subcontinent without ever mincing words or refraining from gruesome details.

Prior to this, a lawyer by the name of Pundit K Santhanam lived in the mansion. He exposed the Jallianwala Bagh Massacre, and was an Indian freedom fighter of some importance. Thus, Lakshmi Mansion is important within the cultural heritage of the subcontinent.

I left early in the morning for Lakshmi Mansion with the hope that I would visit Manto’s abode. As I moved around Butt Tikka and reached opposite the mansion, the sight saddened me. I stopped a casual passer-by and asked him if he knew where Lakshmi Mansion was. I thought I might have come to the wrong place and did not want to believe that the scaffolded building was the Lakshmi Mansion. He did not know about Lakshmi Mansion, and instead directed me towards Mayo hospital.

Ignoring his help, I walked forth and stood before the main gate in confusion. An elderly man, probably a worker, came around the blue gauze hanging from the scaffolds and pissed facing the building. The stench of ammonia permeated the surrounding air. I knocked at the door. A man came out and told me that I could not go inside because his family lived there. I informed him that I wanted to see the house. He pointed towards a mobile number written on the wall and asked me to take permission from the owner of the hollow Lakshmi Mansion. 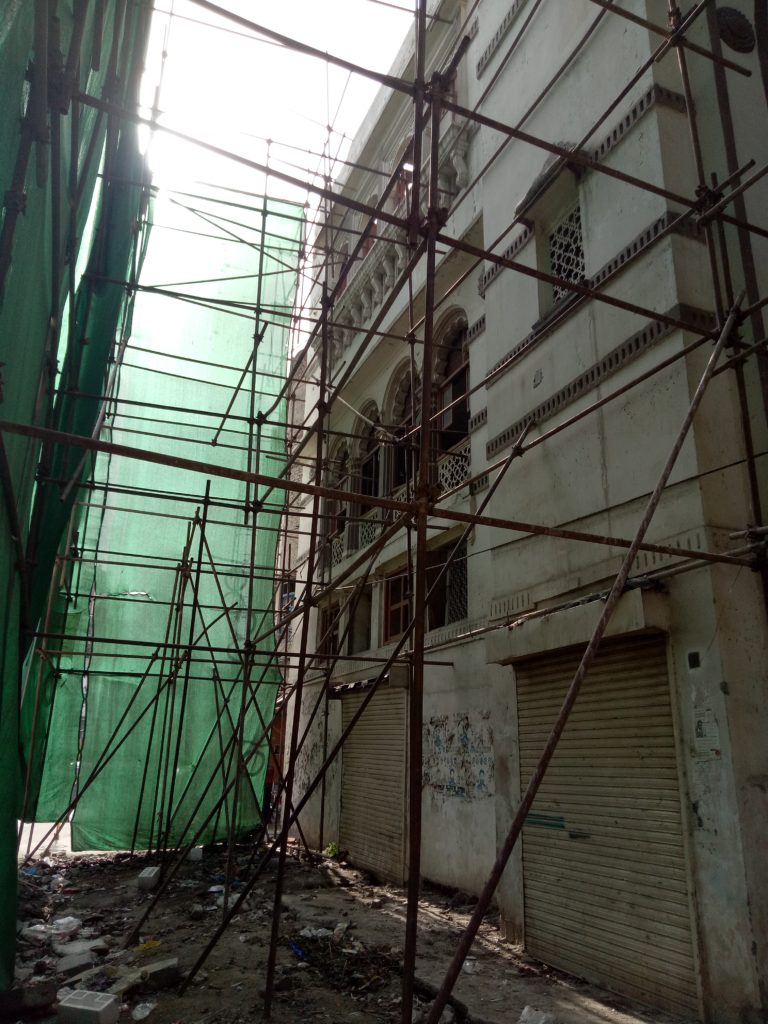 I did not know how to sneak my way into Lakshmi Mansion, after my harrowing experience at FCCU. Therefore, I went back to the main road, circled around towards some little shops, and asked a shopkeeper if I could have a look at the mansion across the haggard wall. He allowed me at once.

I climbed a few stairs in front of a shop and looked inside Manto’s Lakshmi Mansion. There was a small tent in the middle of the empty plot, which was veiled from the outside with the façade of the scaffolded front wall. Nothing else to be seen. Lakshmi Mansion was broken down except the facade of the front walls, strangled by rusted scaffolds. The building was emptied out of its rooms, like a kernel from a nut, and stood there sadly as a decrepit void.

I do not want to throw an intellectual temper tantrum about the callousness of our governments. I do not want call on history and eternity to witness the reasons behind our giddy and confused nation. However, the gutting of Lakshmi Mansion into an empty shell is a terrible shame. Manto’s writings never became part of the common culture because the orthodoxy, which still runs rampant in our country. Our famous writers are those who sell shoddy sentimentality and fake religiosity.

Manto, we did not deserve you.