Ever wondered where to score some of that Insta-famous pink salt from? Boy, do I have news for you. Pakistan is home to the second largest rock salt deposit in the world. Yep, we’ve got rare and precious Himalayan Pink Salt galore. A cave of wonders spanning 400km by the name of Khewra Salt Mines lies near Pind Daddan Khan. That’s where it’s at. 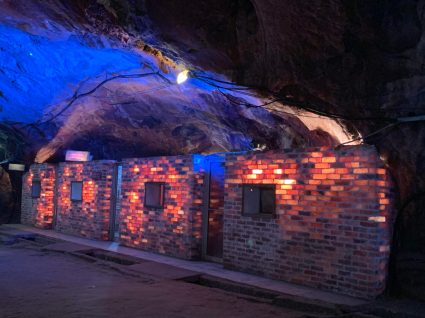 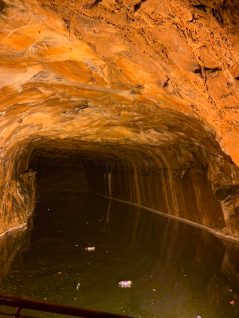 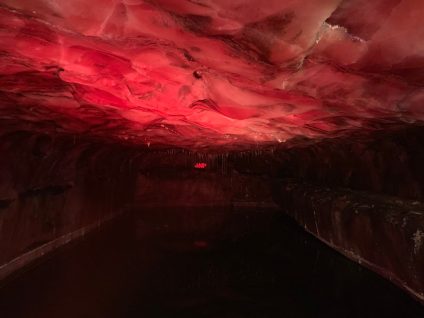 My husband, daughter and I arrived at the Khewra Salt Mines Tourist Center under the blazing June sun. We parked our car and walked to the ticket booth where we bought two tickets, Rs. 300 a pop. Children under the age of four get free entry, so we didn’t have to buy a ticket for our three-year-old. Since we wanted to take the train ride in we paid an additional Rs 160 per head.

As is with most public spaces in the country, the waiting area at Khewra Salt Mines was in dire conditions. The benches were broken and there was no shade in sight. The Sun glared down directly over us. There were a few scattered tuck shops providing basic snacks and drinks, thankfully. It would serve the government well to pay a little attention to tourist sites and how they cater to visitors. The Pakistan Mineral Development Corporation management seemed to have done little in the 15 years since I’d last visited Khewra Salt Mines.

After purchasing the tickets we went on to the station where all the tourists were gathering to embark on the train. According to our tour guide, so far only 5km of salt has been excavated in a period spanning 100 years. As I peered at the cavernous mountain I knew I’d be speechless soon. The train filled up and we went chugging on our merry way. The second we entered the cave the temperature dropped. Within 10 minutes we were 2500ft deep and the mountain stone transformed into a pink stone. It was dark, cold and humid when we came to a halt and disembarked.

As my eyes adjusted to the new atmosphere and darkness I found my gaze shifting from wall to ceiling and back again. The colors I saw were magnificent; gradients of pink and red. A pair of tour guides walked our group through the journey ahead. They gave us a quick run of the history and geology of the great mine and took us, wonder by wonder, across the Khewra Salt Range. 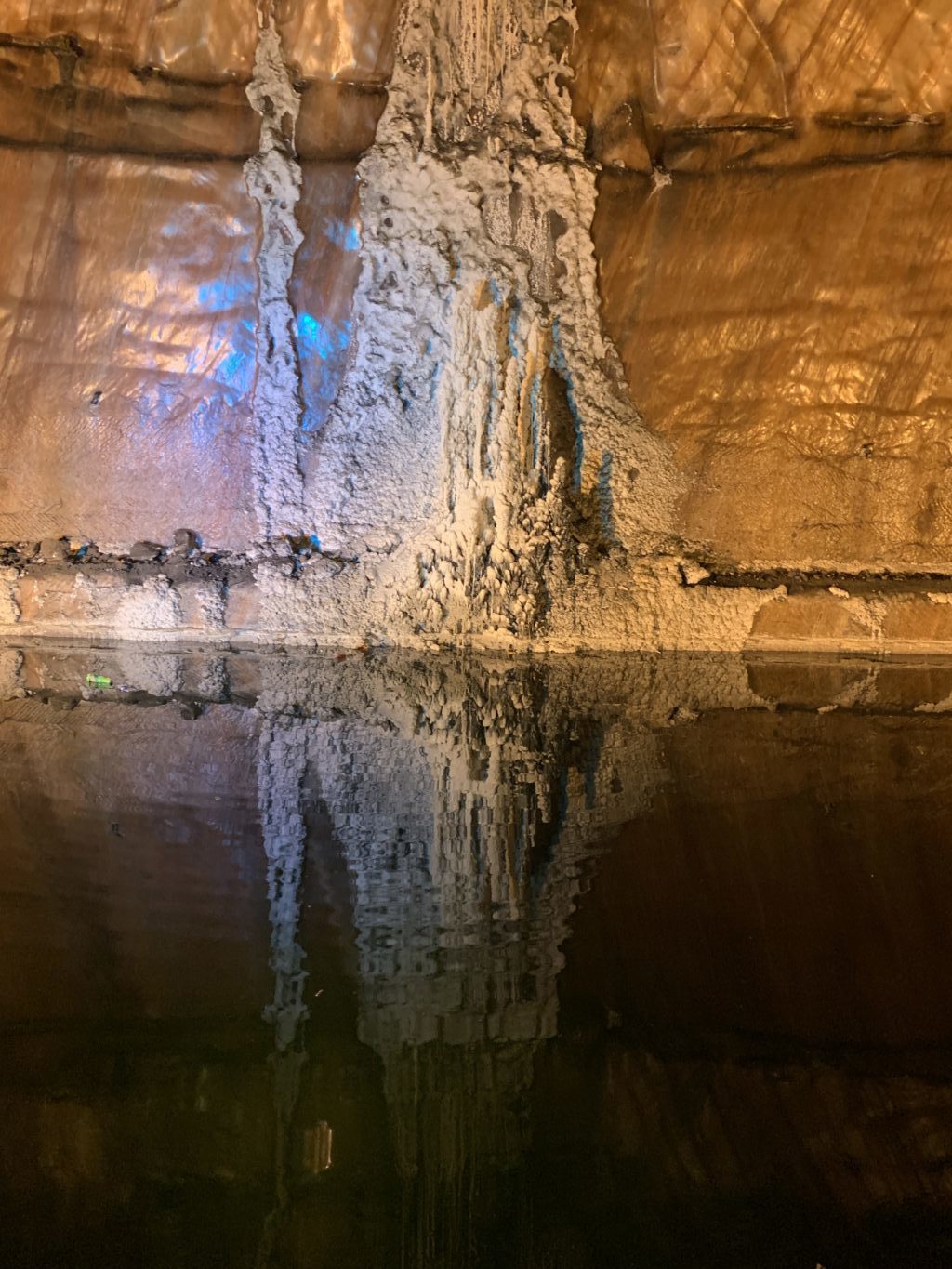 Khwera produces 1500 tons of salt every day, excavated by 2000 miners. Tourists are allowed as far as level 6 of the mine, which spans a whopping 17 levels. The 6th was the one where we were standing, with five levels above and eleven below us. A maze of cleverly crafted and expertly reinforced tunnels connected the entire mine.

As we made our way through we come across several breathtaking sites. A hundred deep saltwater ponds lay in front of us. The ceilings above the ponds were a display of iridescent colors illuminated by muted lights. The salt crystals displayed another sort of luminous glow in certain areas of the mine where ventilation cracks give way to rainwater and as they seep through the stone they create crystal marvel in the hues of white, grey and silver.

We were then led to an open space where buildings constructed in salt were displayed. There was a functional mosque, a mini Minar-e-Pakistan, and an Asthma Treatment Center. Although a proper Asthma Centre on a much grander scale is under construction under PMDC’s authority right outside the Mine, this center acts as a prototype, with three small rooms made entirely of pure salt bricks. This is an interesting development venture as Pink Salt is said to be beneficial for the treatment of acute Asthma, sinus and numerous allergies, according to pseudosciences at least.

As we took pictures in this area we were led to yet another new space that has recently been discovered and opened to the public; Sheesh Mahal. As we walked through the salmon colored passageway I could already see the difference in the quality of salt from the rest of the mine. It was smooth and glass-like; translucent and beautiful.

As we stopped at the biggest saltwater pond in the mine, the ceiling and walls glistened in response to the lights installed. It was a spectacle of a prismatic scale. The walls were a tale of patterned polychromatic Salt Rock that beamed in shades of pink and peach. 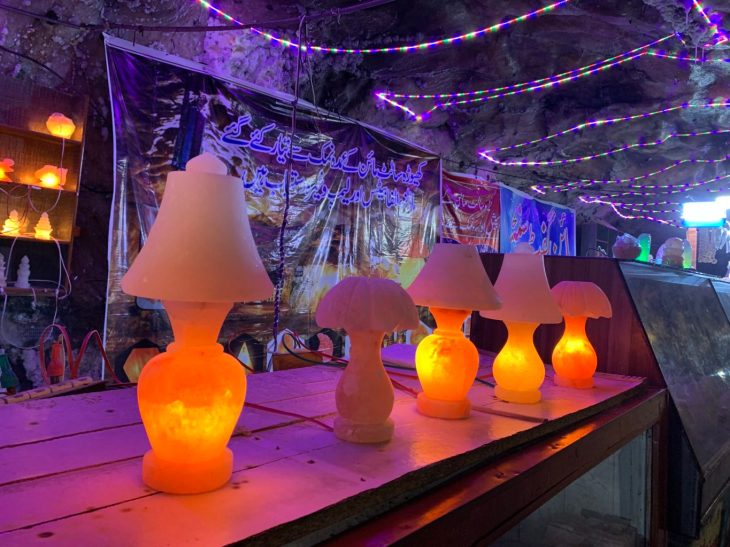 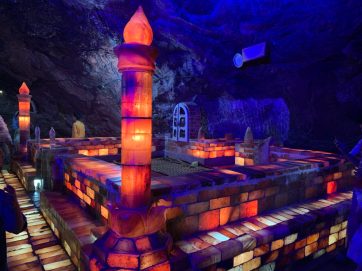 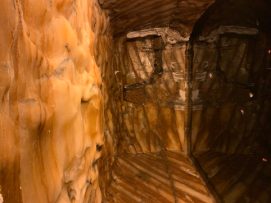 Salty about the Goodbye

Suddenly, our trip seemed to be nearing its end as we arrived at a souvenir shop. It displayed lamps and decor pieces made out of salt. We purchased a tiny lamp and stepped aboard the same trolly train that had brought us in.

My problems with the waiting area aside, The Khewra Salt Mine is well managed, maintained and a sight to behold. Hats off to PMDC under whose jurisdiction the mine has thrived and Himalayan Salt has become easily available to local consumers. We stepped back onto the motorway and made our way back to Lahore, our skin still smelling of salt.