Hot on the heels of the Popeyes chicken sandwich hysteria comes the Finger Lickin’ Frenzy that is KFC’s Beyond Fried Chicken. KFC and Beyond Meat had come together to introduce plant-based chicken poppers and boneless chicken wings. I say had because the test run sold out within five hours. That’s bordering on iPhone and Harry Potter’s pace of running out of stock.

The rollout of the new fried chicken was limited to Atlanta and customers were quick to get their hands on these limited-time offerings. Still no word on whether the Beyond Fried Chicken will be part of KFC’s regular menu. KFC is one of several global fast-food chains that have Beyond Foods on board as a vendor, others include TGIFriday’s, Carl’s Jr, and Dunkin Donuts. 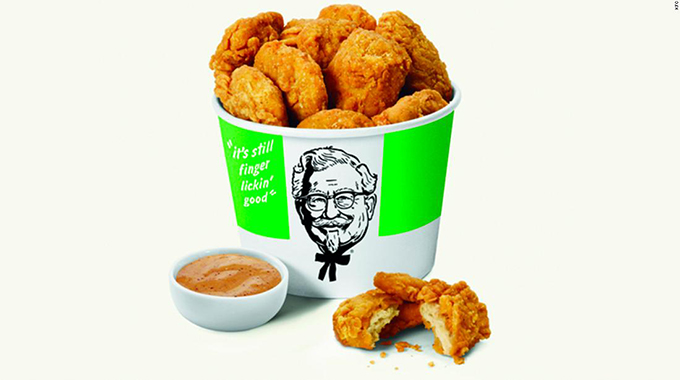 Popular interest in the meatless food trend isn’t new but this five hour wipe out is unprecedented, and someone in the KFC R&D department’s probably crunching big numbers as I type. With a seemingly great first trial, KFC will probably go about cementing their partnership with Beyond Meat. Do I smell a nationwide rollout?

At this point, I should emphasize that this is not an entirely vegetarian or vegan option. KFC is frying these meatless nuggets and wings in the same fryers as their regular chicken, targeting the flexitarian market more so than a purely vegan one.

KFC is as much part of a collective Pakistani conscience as it is of American culture, and there is certainly hope that these alternative meat options might be made available in major cities across Pakistan, eventually at least.

The Future of Meat

Meanwhile, Beyond Meat is going toe-to-toe with Impossible Foods in a bid to overtake the meatless-meat industry, with both companies using cutting edge techniques to recreate the feel and taste of real meat. All of the flavor, none of the cruelty. Both Beyond Meat and Impossible Foods have been busy forging bonds with various food chains, and it won’t be long before every restaurant out there has a meatless meat variant. Let’s see what the future holds