When Port Grand opened at the Native Jetty in Karachi, people had a lot to say. Some said it was just another recreational site, while others called it ‘Thailand in Pakistan’. Most people said it was like ‘Europe in Asia’. That’s probably why I’m writing this review. 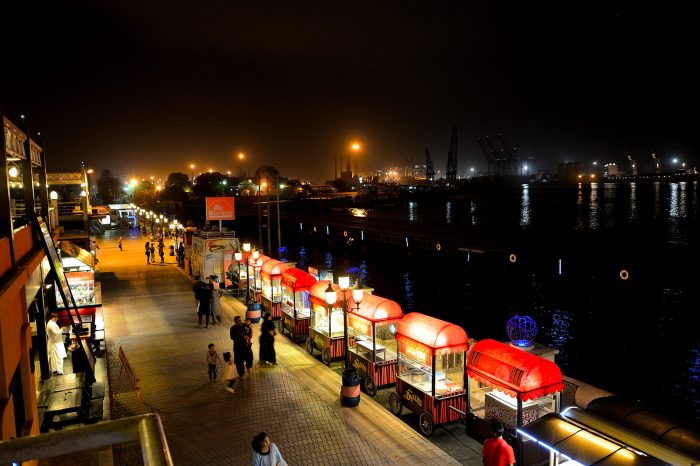 It took almost three years for us to finally give Port Grand a go, and I am elated that we did. The staff at the ticketing booth at Port Grand quickly tackled a long line of customers. While waiting for our tickets, my family and I craned our necks to catch a glimpse of the building inside. One glance and our interests were piqued.

When we had finally entered, I realized that the building that we saw from afar was actually a mall. A magnificent entrance had the words “Port Grand” announcing its presence. Excitement engulfed me at the thought of shopping there.

We moved further inside to journey along the grandeur this place had to offer and passed by various kiosks and snack vendors. It reminded me ever so slightly of my trip to Murree.

After redeeming the value of our tickets for some cups of sweet corn, we decided to watch a magic show. Sharing our treats, we passed by a horse cart entirely adorned in lights. It was like the carriages you see in one of those Disney animated movies about princesses. We got seated and watched the enticing show while the male members of my family took the children to the arcade and gaming zone.

There was so much to do here!. When we got bored of the show, we decided to join the younger members of our family, who were having the time of their lives bungee jumping.  Other, even younger members of our family were bouncing away in the jumping castle. After they were done, they told us all about the gaming arcade and about how thrilling it had been to ride a rodeo bull.

We moved back towards the mall where I decided to explore some of the shops while my husband and brother in law corralled the children. We passed by a few shops and stopped at Miniso.  Miniso is a Japanese brand and has recently opened at several locations in Karachi. With low prices and good quality products, it was packed like a can of sardines. It took us the better part of an hour to go through everything Miniso had to offer, and I ended up buying a stuffed toy for my little one and a storage box that doubled as a stool for myself.

My sister in law bought a pair of flip-flops and a perfume for her husband. The scent of the perfume was very captivating and the flip-flops were a good buy for casual use. 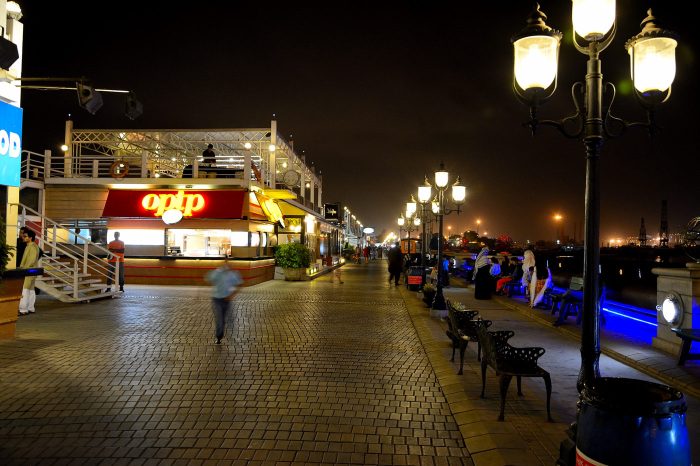 Moving towards the food street, we passed a few attractions of Port Grand and decided to take group pictures. The fountain-like attraction – where we met my husband and the little ones – was my daughter’s favorite. She kept pointing at mascots shrieking when they moved closer.

The food street was built on a pier, with kiosks, stalls, pavilions, and small hut-like restaurants spreading as far as the eye could see. The stalls offered a vast variety of desi street food items while the restaurants served everything from Desi and Chinese food to Continental and Fast food.

Along one side of the pier, we halted by the railings beyond which lay the vast blue ocean. There were ships docked at the port and a flock of white birds flew over the water. The restaurant opposite to where we stood was built like a boat with upper and lower decks to dine in.

We were in the mood for some desi food so we decided on a kebab house for dinner. The rooftop proved to be a great idea as we were able to dine while enjoying the view of the vast ocean. It was a delicious dinner, with mouth-watering kebabs and other BBQ items. The food was impeccable, with very tender meat and the right amount of spices. Saying it was perfect would be an understatement.

After dinner, we stopped at ‘Walls’ to get Ice creams and booked a mini train ride for our children.

Our day at Port Grand was well spent. Although we spent hours there, there was so much left unexplored that I’m already planning my next trip there.