Johnny and Jugnu and Their Scrumptious Burgers

If you’re looking for a good, hygienic takeaway restaurant in Lahore I’ve got just the place for you: Johnny and Jugnu. Located in Johar Town, Johnny and Jugnu serve scrumptious burgers and wraps that are not at all heavy on the pocket. An average meal would be around PKR 250 to 400. The eatery is also considered one of the best restaurants in Lahore for casual dining (or drunk food). Johnny and Jugnu was launched in 2015 and quickly became a fast food favorite. The orders are prepared in an open kitchen. You can actually take a look through the glass window to make sure that the food is prepared in a neat and clean manner. In fact, you can fix up your own meal as well. All you have to do is choose your burger, pick one from six sauces, add some fries or drinks if you want and voila!

I tend to stop by the restaurant on my way home to grab some lunch. On one such occasion, I ordered a Chicken Fillet Burger and added jalapeños and garlic sauce to it. With a can of Coca Cola the meal accumulated to PKR 400 in total. I asked the person taking the order to have the burger cut in half so that I could take a better look at what was inside it (pet peeve).

I was given a small device that is supposed to light up when my order is ready. I waited for about 15 minutes until the round striker-disk-like-gadget lit up. I collected my food and settled down in the car.

The burger was mutilated, but I asked for it to be cut in half so that one is probably on me. I was surprised that after going through so much torture, the sesame bun was still intact. That is the sign of a good bun right there. The fried golden-brown fillet had a crispy crumb layer. It was not very oily and the spice level was not too overwhelming either. 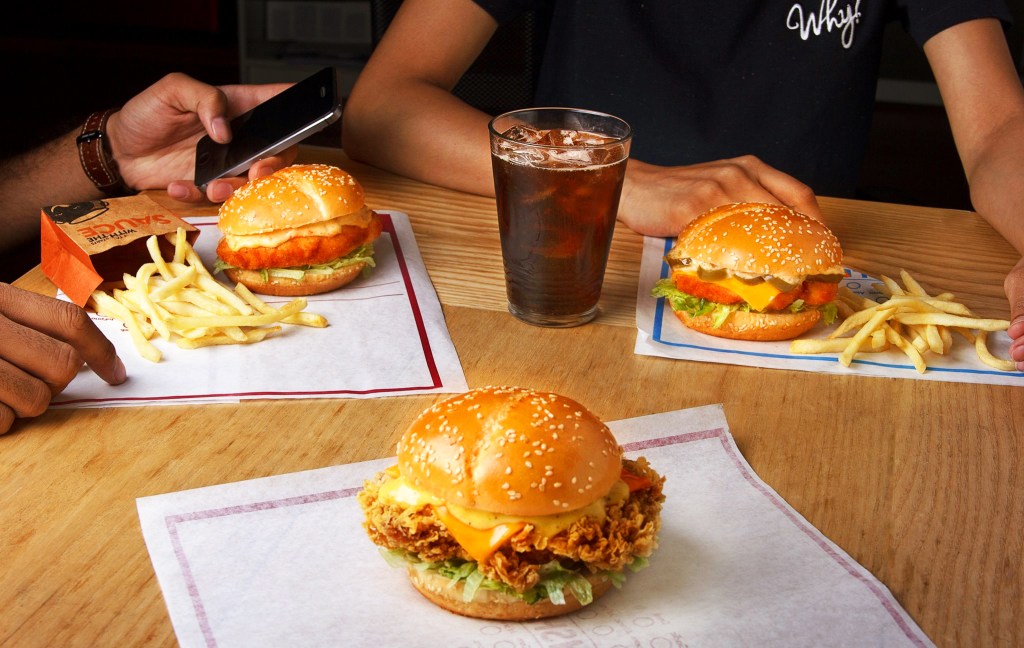 The chicken was chewy but not in an unpleasant way. The burger was loaded with sauce which gave a garlicky, slight peppery flavor to it. The jalapeños were not too spicy and faded somewhere with the thick garlic sauce. But I wasn’t complaining because the fillet itself was full of rich flavors. The burger was of a generous size and would be enough to fill a person with an average appetite. If you want to go a little further, try adding in some fries as well.

The Johnny and Jugnu wehsi burger gives KFC a run for their money, and the Johnny and Jugnu wrap price might make you weep with joy. They serve delicious, low-cost food while maintaining high levels of hygiene. It could serve as a perfect spot to easily get rid of those annoying, unnecessary “treat to banti hai” (it’s time for a treat) moments. Just saying.

Update:
In December 2018, whispers began that Johnny & Jugnu had been sealed and there was a warrant out for the apprehension of the owners. An FIR circulating online alleged that a customer found a deep-fried lizard in the food that they had ordered from Johnny & Jugnu. The customer contacted 15 and was taken to a local hospital to receive immediate medical attention. A picture of the infamous “deep-fried-lizard” was also making the rounds on social media. The infamous Johnny and Jugnu lizard scandal turned out to be a complete lie.