Recently setting fire to theaters in Lahore and Karachi is Fatima Maan and Saeed Rahman’s Jhaanjar di Paanwaan Chhankaar. Directed by the brother-sister duo, Sarmad and Kanwal Khoosat, the play is produced by Olomopolo Media, an arts-focused production house based in Lahore and run by Kanwal Khoosat herself. The play takes its name from the classic Noor Jehan song, Jhaanjar di Paanwaan Chhankaar, featured in the 1984 film, Sholay, which seems an apt decision on the producer’s part as Olomopolo Media intends to pay tribute to local icons, both past and present, as well as provide a platform for new artists to grow.

Jhaanjar di Paanwaan Chhankaar introduces the Pakistani theatergoer to a story that strays from traditional gender roles. The writer focuses on characterization; on how it has contributed to presenting original and dynamic individuals to an audience that is otherwise used to stoic figures on stage. 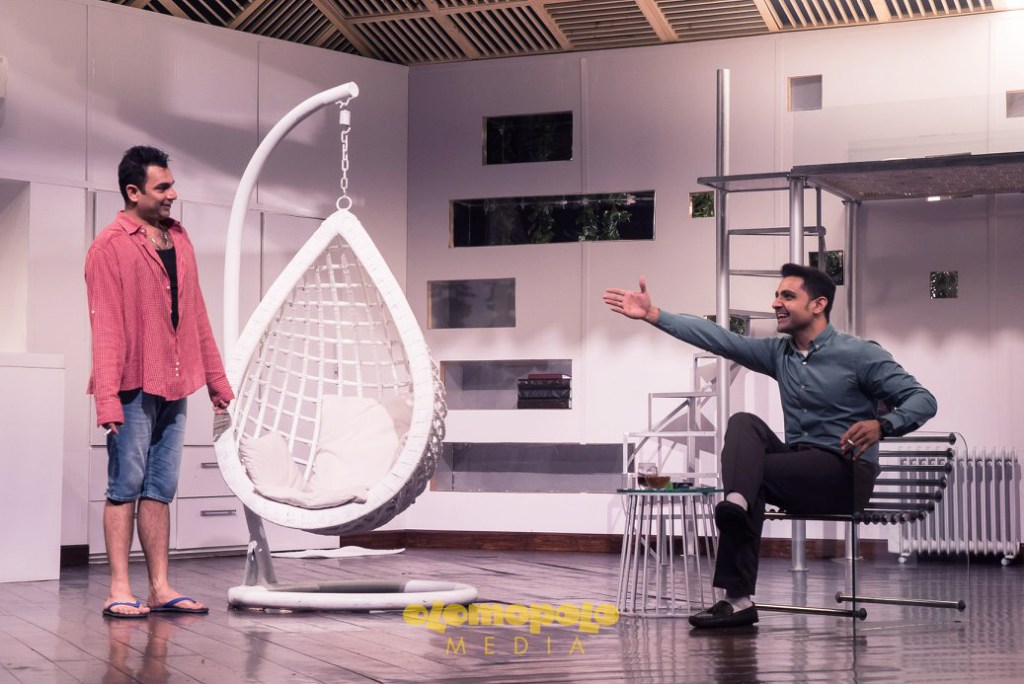 The play revolves around three main characters: Hamza—played by Zain Afzal, an upcoming theater actor—is a blind aspiring musician, who makes a recent move to Lahore, leaving his comfortable lifestyle of maids, private tutors, and continuous parental interference in Sheikhupura; Robina Sohail—or as she prefers, Mrs. Sohail—is played by Samiya Mumtaz, who is the classic finicky, over-protective, self-righteous South Asian mother; and Zaman—played by Sarmad Khoosat himself—is an eccentric upcoming actor who moves next door to Hamza. The play is an unfolding of their changing relationships to one another as well as their personal understanding of how they negotiate relational dependence—or the lack thereof.

The characterization, for the most part, is crafted and delivered beautifully—instead of falling into stereotypes, the playwrights have concocted the three leads to exude vibrancy and originality, difficult feats to accomplish given that the playwrights were fidgeting with characters that have iconic, cliche imagery, dialogues, accents, and even props associated with them both in film and on stage. Even Mrs. Sohail, who, from the onset, may come off as an elitist, conservative daughter of a feudal lord and wife of a Sheikhupura-based businessman, is shown to be an Urdu writer for Taleem o Tarbeeyat. Moreover, for her, her son’s relationships with men, which hinge on more than “just friendship,” are not problematic because of their romantic and/or potentially sexual nature; rather, she is concerned by the lack of commitment and insensitivity that people can subject her son to.

However, unlike Hamza, Zaman, and Mrs. Sohail, Emaan’s characters falls into the trap of embodying what is the formulaic image of a Pakistani girl with a foreign degree—Columbia in her case; played by Iman Shahid, Emaan is a short love-interest of Zaman, surfacing towards the end of the Jhaanjar di Paanwaan Chhankaar, who is directing the film Zaman is playing the role of Anjuman in and is eager to alter the face of the Pakistani film industry by making “revolutionary” films about subverting gender roles and the dominant patriarchy. While Hamza, Zaman, and Mrs. Sohail’s characters steer clear of all stereotypes and cliches, Emaan’s character does the opposite. Her accent comes off as fake instead of a product of assimilation and FYOY-living in New York City, and I expect someone who studied film studies or the humanities at a leading institution in Manhattan to be slightly more cognizant and sensitive when conversing with Hamza as I expect her exposure and awareness to blindness and disability to be slightly more profound. Her discomfort around Hamza is intended and apparent, which makes her seem less of someone who came from the U.S., Ivy League-stamped and all, with high aspirations to change film narratives in Pakistan and more of someone with overflowing daddy’s money and an XYZ local degree, who thinks that making films is the latest trend in town.

As far as the script is concerned, while most narratives, texts, films, or stories make disability and homosexuality the pivotal concerns and the wheels that drive the plot, Maan and Rahman do a stellar job of creating characters and a storyline where blindness and preferred gender and sexual orientations take the backstage. Whilst homosexuality is never prominently highlighted in the play, the subtlety with which the subject is dealt with, for example, through detailing Hamza’s friendship with his neighbors, Daniyal and Layla, in Sheikhupura, is striking and impressive. In addition, the acts are laced with beautiful moments of intimacy between Zaman and Hamza, where we are not really “shown” where the relationship is going, but hand gestures, gazes that are slightly longer than they should be, and a genuine concern for the other put two and two together for the audience. The directors and playwrights have carefully, but magically, spun the tale so as to appease both the conventional as well as the progressive taste buds of the contemporary Pakistani theater-goer. 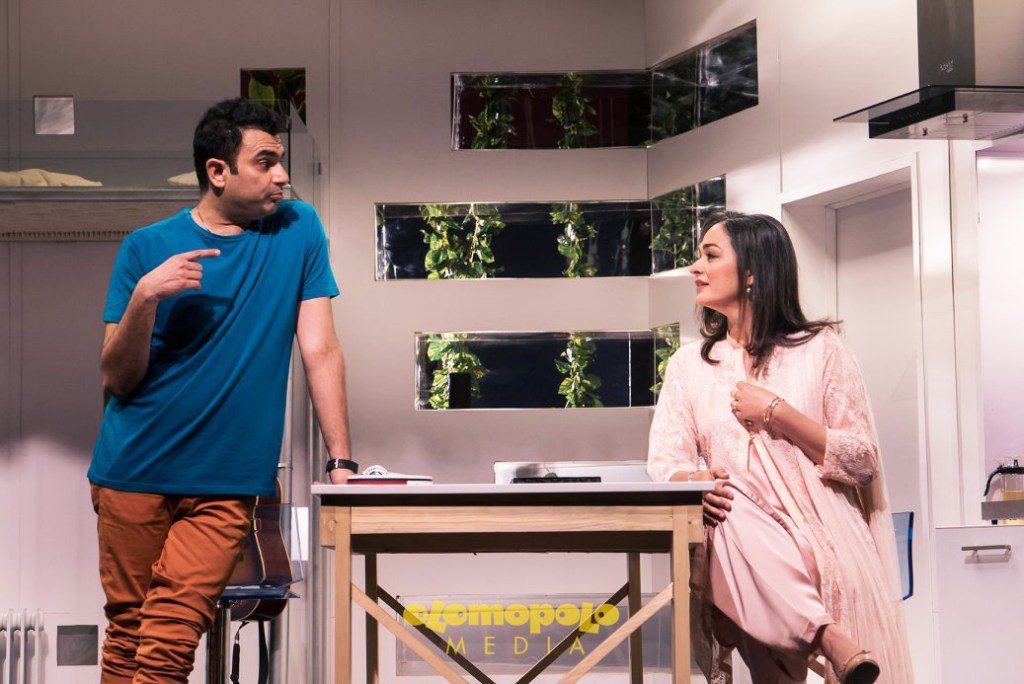 The center stage, then, is taken up by complex emotions, psychological idiosyncrasies, and the complicated, intricate mess of human relations and expectations. The cardinal issues for Hamza are not—as one would expect—his blindness or homosexual tendencies in an oppressive society. Rather, he is concerned with proving to himself—and his mother—that he is capable of living independently, that he is mature and confident to deal with the real world, and that he is “normal.” He misses friendship and intimacy, indicative from his lackluster attempts to convince his mother that “friends” gather around at his place at night as well as from his monologue reminiscing Daniyal and their long drives in Sheikhupura before Daniyal tied the knot. Zaman, whereas, suffers from commitment issues, relatable for numerous young and struggling professionals, as well as from the Ami-ne-kaha-tha (Mother-said-so) syndrome, prominent from his short-lived marriage to his cousin, Sonia. And while he is sincere and genuine, he is scared of dependency and interdependency. Zaman and Hamza’s multifaceted, yet oddly honest and straightforward, characters hit home.

The script is full of one-liners that leave you hanging on the edge of your seats throughout. Pop culture references, political innuendos, songs (Jhaanjar di Paanwaan Chhankaar and Kabhi Hum Khoobsurat Thay), clever irony and satire all merge together to give the oddly distinct and distant storyline a familiarity, which is engaging but also discomforting. The script forces us to look for the Hamzas and Zamans in our lives. It steers us into thinking about the microaggressions that we have internalized and consistently reproduce. It pushes us to step back and think about the times when we have embodied Mrs. Sohail partly or entirely, if we give spaces in our relationships, if we are overbearing, and if our concern for others spills out of our concern for ourselves. Mental support and emotional well-being are as significant—and perhaps even more crucial—than providing physical aid and external help such as education, healthcare, and facilities. Hamza’s parents had the financial means to support private tutoring and a comfortable lifestyle, yet he lacked self-belief (provided by Daniyal) and had an unquenchable desire to assimilate with others, apparent from his rebuttal of not being sent to special-needs schools. Jhaanjar di Paanwaan Chhankaar begs us to question ourselves if and when we have forcefully, dominantly, or subconsciously tried to become another’s spine when, perhaps, they just needed us to support their breaths. 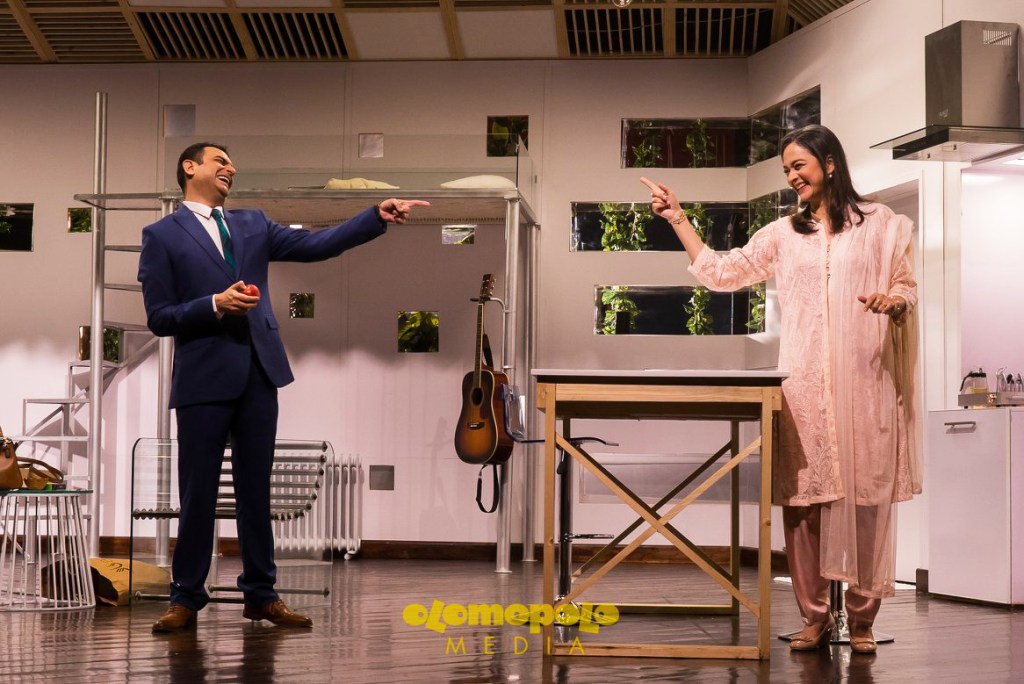 The spellbinding story-line and the delightfully appealing characters are accompanied by a set, mimicking Hamza’s apartment, that is an absolute treat to the eyes (especially after combating Lahore’s never-ending traffic jams and long ticket queues at Alhamra). Designed by Kanwal Khoosat, this set is the perfect cross between Pinterest-minimal and Instagram-Rich-Kids-of-Lahore. Ikea-styled white cupboards and doors and a small kitchen line the stage with a high-rise bed standing towards the back; dotted with green plants, the rest of the apartment houses a hanging sofa, a small coffee table, a stool/chair made out of what seem like woven copper wires, a pop-out-of-the-wall laptop desk, and a prominently displayed Macbook Pro. And whilst the set is aesthetically pleasing and the perfect Instagram shot for today’s popularly self-acclaimed lifestyle bloggers, it also puts a strong message forward: disabled, or differently-abled, people should not be confined to ramps, wheelchairs, walking sticks, and special furniture. Our external environments and design—including architecture and interior decor but also extending to infrastructure and pathways of mobility—have a prominent role to play in dictating how an individual assumes or embodies normalcy, whether he or she feels included or excluded from his surroundings because of a physical barrier or ailment, and whether his assumed needs takes precedence over his emotional needs and mental well-being.

Jhaanjar di Paanwaan Chhankaar is an act of bravery: to bring two subjects that are hardly given the attention they deserve in parallel to one another and yet create a narrative that resides on the sidelines—independently. I am sure very few people can make Khoosat dance Filmazia-style in silver platforms on the most coveted performance stages of the country, and we must applaud the playwrights for attempting—and succeeding—in doing so.

The play was completely sold-out in both Lahore and Karachi, ending with standing ovations every night. The cast and crew is in Islamabad this week, meeting students and faculty at universities and colleges before the upcoming performances on May 5 and May 6 at the Pakistan National Council of Arts; tickets are available via Mocca, easytickets, and Sattarbuksh.

Tags:
For the Squad, Plays and Concerts
Share:
previous article next article