Jaidi Biryani for your Inner Sindhi

My mother finds it hard to let her multi-ethnic heritage slip by unnoticed. Her food is the only testament of her 1/4th Iranian DNA. Albeit thankful for the presence of kibbeh and kuku on our dastarkhwaan, I’m resentful of her biryani-purist tendencies. Jaidi Biryani mixes that shit up.

The Context for my Biryani FOMO

You see because Mama Gillani has been shoving mutton biryani down my throat for years, the concept of aloo and chicken in biryani was as tempting as it was alien. Up until Jaidi Biryani. Sorry Mom, I am never coming back. 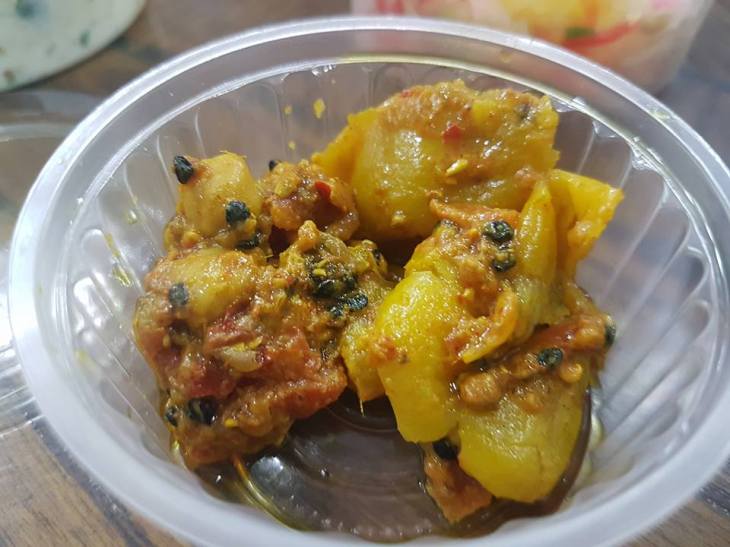 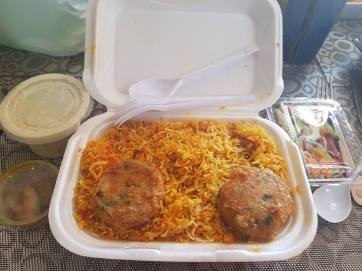 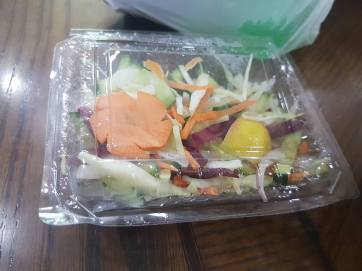 Jaidi Biryani: Aloo Me Up

I knew of Jaidi Pan Shop solely because of its proximity to Karachi Hot n’ Spicy- purveyors of amazing Bihari roll parathas. On a recent visit to H Block, our friend Zeshan decided to opt for biryani from Jaidi, unlike the rest of us who had ordered roll parathas. It was the only thing worth eating that day.

Zeshan’s order arrived before the rest of us had been served and it was a feast. More on that later.. and in an uncharacteristically generous move, he offered us a bite each of his biryani. While everyone else was busy waiting for the punchline……

Jokes apart, I decided to take him up on his offer. It changed my life.

I  swooped in for a second, third and fourth bite before he had a chance to ask for his tray back. I spent the remainder of our meal sadly nibbling on my roll paratha and eyeing his Jaidi biryani. 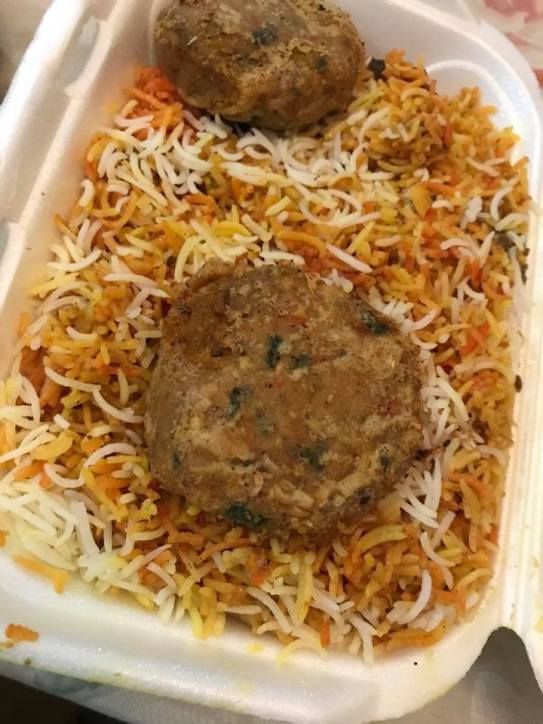 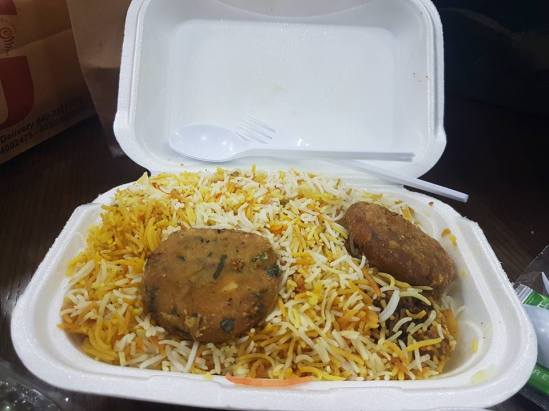 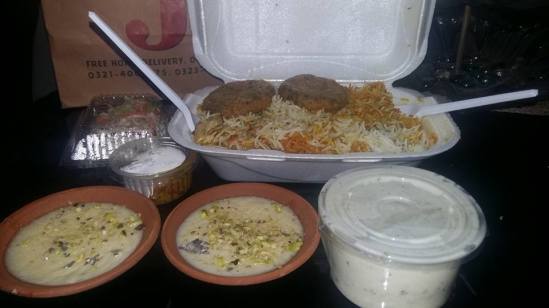 The very next day I decided to order Jaidi Biryani for lunch. I already knew I liked this new breed of biryani but now I wanted to take my time with it and really enjoy it. Nice and slow.

When I looked it up online I came up empty– Jaidi markets itself as a Pan Shop and tracking down their menu proved to be a task. I figured I already knew what I wanted, so why not just call them up and ask for it?

I found their number on Facebook. The phone barely had time to ring once before the manager picked up my call. I asked for a Biryani and he asked me if I was referring to the Jaidi Biryani deal. Sure I was. He then asked me if I wanted a half, a full or a jumbo serving. I’m nothing if not self-aware: a half-plate serving would suffice.

I was told to expect my order within the next half hour– It took the rider 15 minutes.Rs. 280, delivery included. The Jaidi Biryani deal includes a shami kebab, raita, salad, a 500ml drink, and dessert. Dessert alternates between zarda and kheer depending on what they feel like sending in. It felt like a steal. 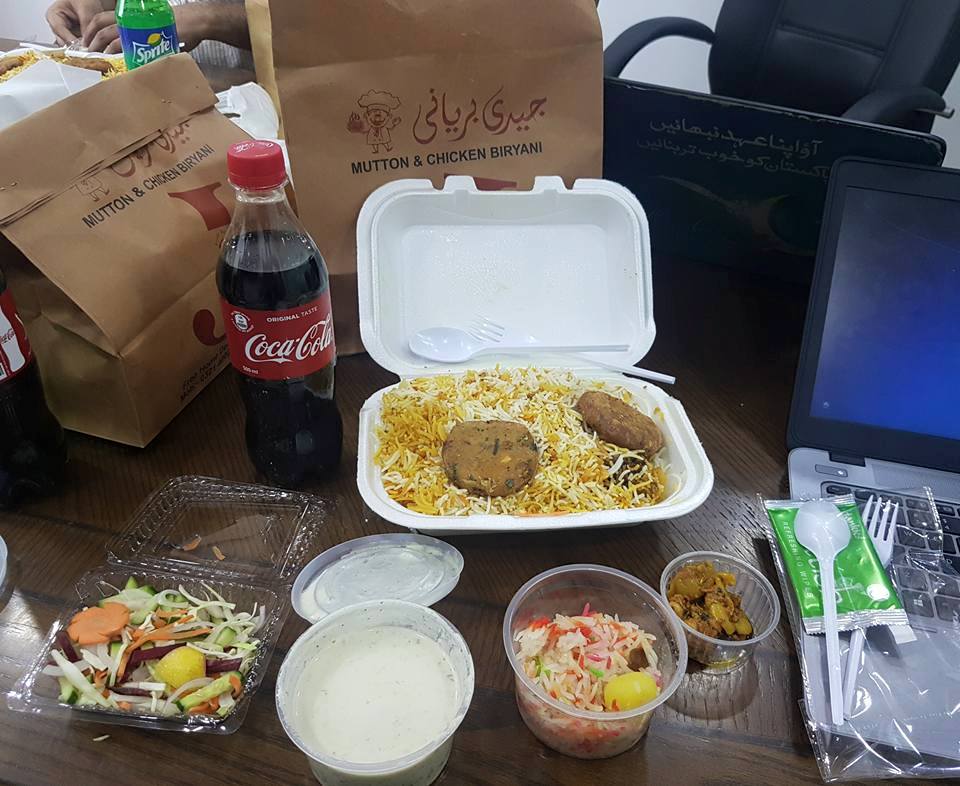 I had some serious eating to get to. I opened up the bag and pulled out five containers of varying size, weight, and relevance. I ended up discarding the achaar, raita, and salad.  Give it to me straight no frills attached.

I set the kheer aside for later. Out came the container of biryani. What’s that?  Some bullshit, that’s what. I love you Jaidi biryani (spoiler alert?) but biryani is no place for a chicken shami kebab. Trashed.

Let’s get to the point already!

A massive charbroiled chicken thigh and a whole spicy roasted potato were hidden beneath a layer of saffron-splotched rice.  Pockets of spice and tamarind were layered through the biryani. The smell was glorious. I would be having this again.

I have a relatively low threshold for spice. Jaidi Biryani is a bit on the spicy side. That being said, what good is biryani that doesn’t have you panting, sweating, red-faced and huffing? Jaidi Biryani definitely got me there. But it’s aloo I’m really digging. but more than that the presence of aloo in biryani changed the game for me. 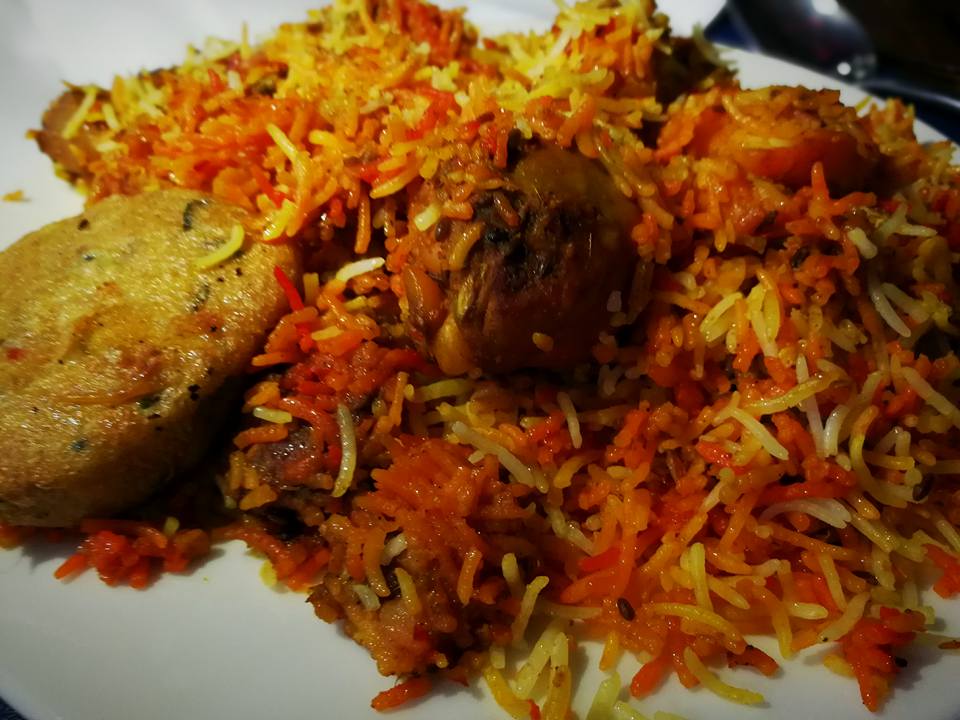 Aloo + Biryani- I ship that.

Midway through my biryani, I realized that this was a half plate serving that I was struggling with. Half a serving could have easily fed two hungry people. Or three not-so-hungry people with a toy dog. Or better yet, four toddlers, their pet chicken, and their imaginary friend, Jeremy.

Anyhow, I finished it by my lonesome. Under 40 minutes mind you. I washed that down with the kheer and it was a perfect little end to my meal.

Jaidi Biryani is perfect for a midweek treat.