The Impossible Whopper is a collaboration between the international fast food conglomerate Burger King, and California based startup, Impossible Foods. The burger is made of plant based meat, and imitates a number of beef traits, including bleeding, to bring it closer to the real thing.

Heme, a protein extracted from soybean roots is being used to form the patties. The patties are touted to replicate the taste and consistency of beef, without the beef. The makings of the perfect veggie burger? Perhaps.

Prior to the San Francisco move, Burger King offered the Impossible Whopper in roughly 200 Alabama, Georgia, Florida, and Missouri locations.

The Impossible Whopper is the lovechild of Burger King and Impossible Foods. The latter, formed in 2011 and based out of Redwood City, California, wants “To save meat. And Earth.” San Francisco has long been a hot spot for people engaged in food activism, and the Impossible Whopper tackles some major alternative meat movement qualms like animal cruelty, global warming, and adequate nutrition.

Want more? Check out our other similar posts:

Google Food Delivery: Skip The Middleman
5 Best Beef Burgers in Lahore You Should Be Talking About
Alternative Yogurt: Changing Cultures

2019 has been about rapid growth and adoption for the alternative meat movement. The Impossible Whopper comes off the back of a massive $300 million round of funding for Impossible Foods in May.

This is also not a new concept for food restaurants. Carl’s Jr. and White Castle already have their own versions of an impossible burger; Del Taco and Qdoba have also announced their intentions to enter the vegan, vegetarian, and meatless race.

And while the US may be charging into sustainable production practices for fast food, it seems unlikely that Pakistan will follow suit right away. Pakistan’s annual red meat consumption per person tripled from 11.7kg in 2011 to 32kg in 2016. The figure is set to increase to a whopping 47kg by 2020. The Impossible Whopper may truly be impossible in Pakistan.

To make matters worse, this is completely uncharted territory for fast food establishments in Pakistan. McDonald’s, KFC, and Carl Jr.’s local variant, Hardee’s, are yet to demo alternative meat products, with no foreseeable action plan.

Even if meatless meat was to make a cameo in Pakistan, Burger King hasn’t proven to be Pakistan’s most-liked fast food chain. The restaurant’s Facebook page currently has its ‘Reviews’ section turned off. But customer sentiment makes it hard to ignore the obvious: 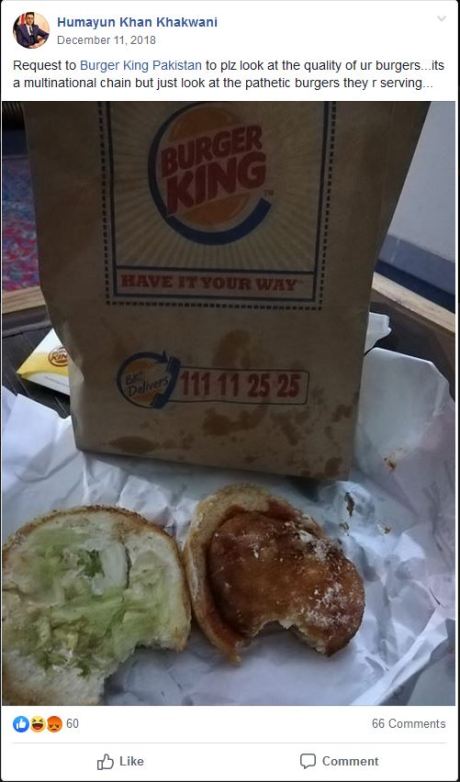 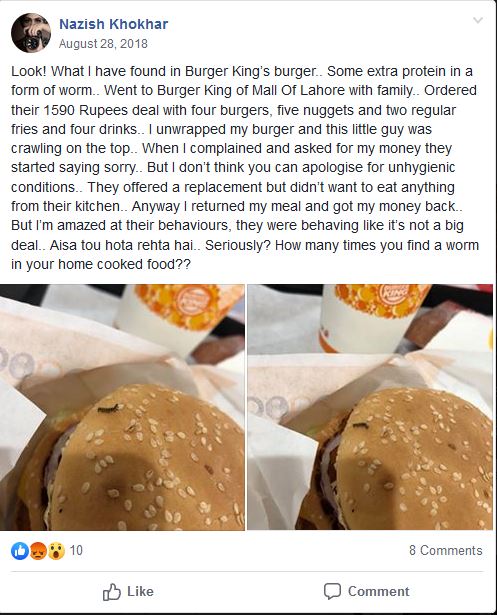 Be that as it may, products like the Impossible Whopper have the potential to reduce the volume of cattle slaughter, combat climate change by minimizing methane gas output, among other fringe benefits such as tackling health concerns like antibiotic resistance due to meat consumption.

As alternative meats get adopted left, right and center, it may not be long before the real novelty is a beef based burger.