Hot ‘n’ Spicy: Nothing Short of a Sensation

You know those days where you’re so tired from all the daily work at home that just the thought of cooking would give you a migraine? At the same time, the idea of getting ready just to eat out seems equally torturous. On one such day, my husband and I decided to finally see what the hype around Hot ‘n’ Spicy was.

Hot ‘n’ Spicy is a household name and if you’ve lived in Lahore you must have heard of it at some point, in some context or the other, though it is actually “Karachi’s Hot ‘n’ Spicy”. More than a restaurant, Hot ‘n’ Spicy is the name of a phenomenon. It is the epitome of Pakistani comfort food; it is the idea of easy service; and is also a landmark. It is one of those places where you can go at any time of the day; you know it will be open even late at night when everything else is shut. Also you can eat in your car, which was also the highlighting factor yesterday. 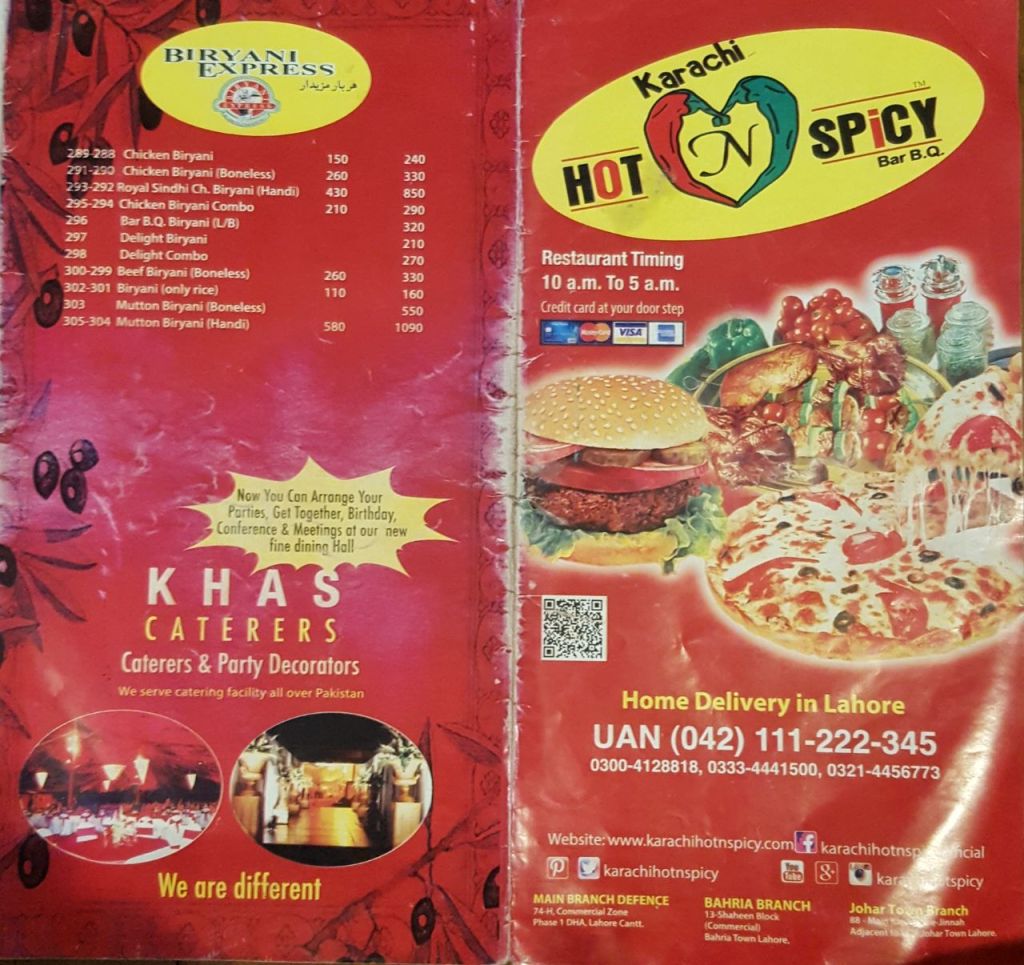 We waited for our friend and house-guest to arrive home. As soon as he came, we all jumped into the car, just as we were; pajamas and all. We drove into H block market, in DHA, Phase I, and amidst the sea of neon lights and sign-boards we found our destination.

We parked our car in the central parking lot and just as we stopped, a group of young men flooded us with menus. But we obviously only wanted Hot ‘n’ Spicy. The entire market’s population seems to be half occupied by waiters from different shops and restaurants and children selling random things like tissues. This market in particular is very rich with this kind of business and so there are a variety of menus. We asked the others who belonged to Hot ‘n’ Spicy. The waiter, dressed in a red uniform, stepped forward as the people parted in two waves. Immediately we were handed a menu; a menu with over three hundred items! 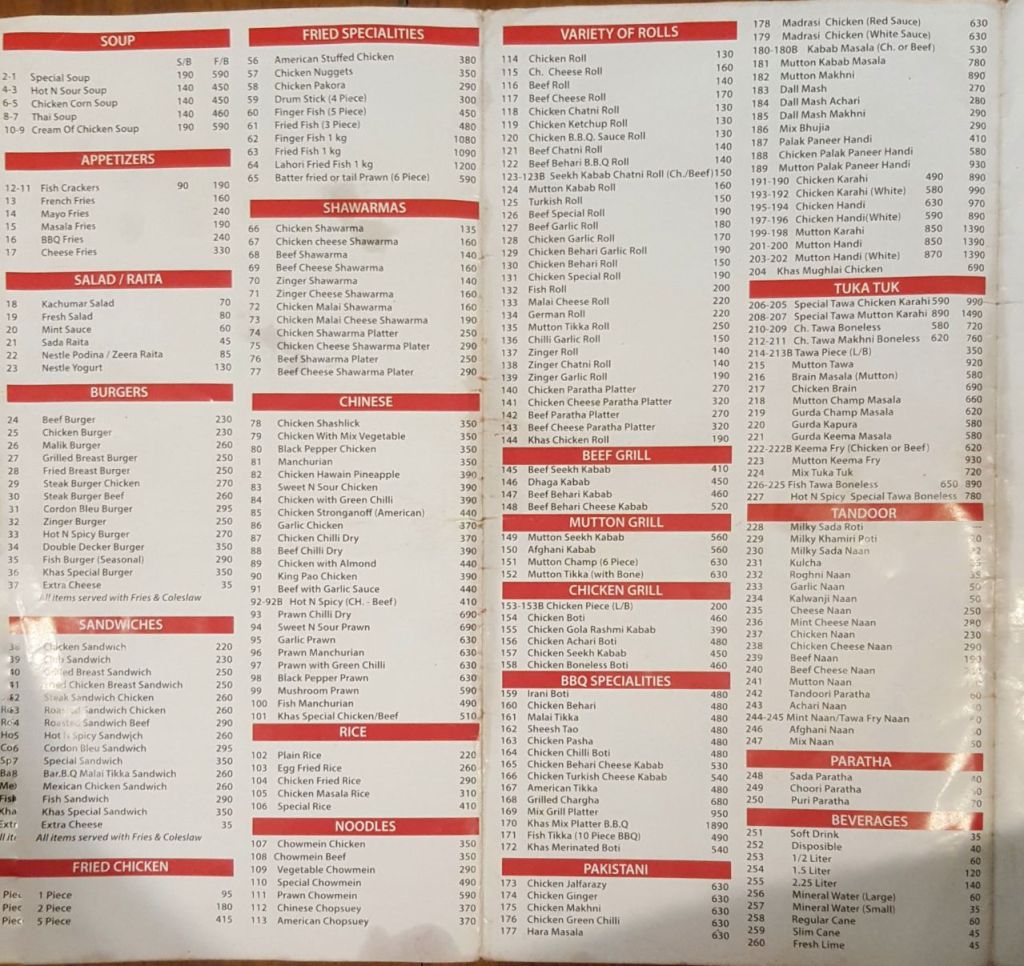 They offer soups and salads, while the only thing that qualifies as an appetizer, according to them is French fries. Main entrees include sandwiches and burgers, a variety of fried items, shawarmas and paratha rolls, all kinds of Chinese dishes, pastas and pizza, and a whole range of local cuisine. Is there anything that Hot ‘n’ Spicy doesn’t serve? This just added confusion to our already hungry stomachs. We looked at each other trying to figure out what to order. As the waiter stood outside glancing at us, there was a comical yet awkward silence. So we asked the waiter what people ordered the most, in order to help narrow down our selection and break the awkwardness. He highly recommended the paratha rolls; that Hot ‘n’ Spicy was most famous for this and these were regularly ordered. 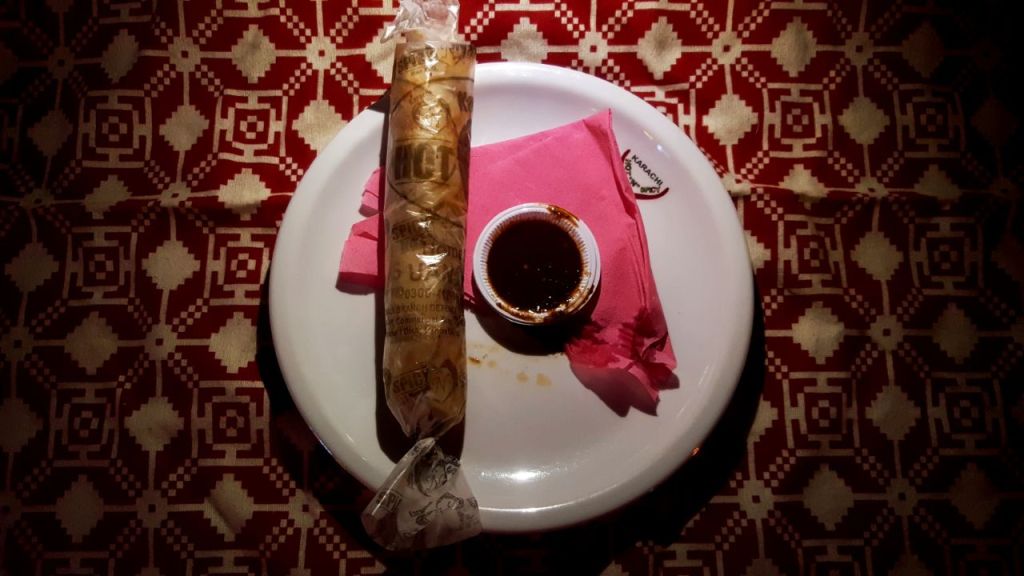 You can see that there is a small dining area as well but I feel like the real charm and attraction is being served in your vehicle. I was most comfortable inside my own car, at this point even putting my legs up. Before we knew it, the waiter had brought our food. I don’t think it had even been ten minutes. A most wonderful surprise when you are as hungry as I was. 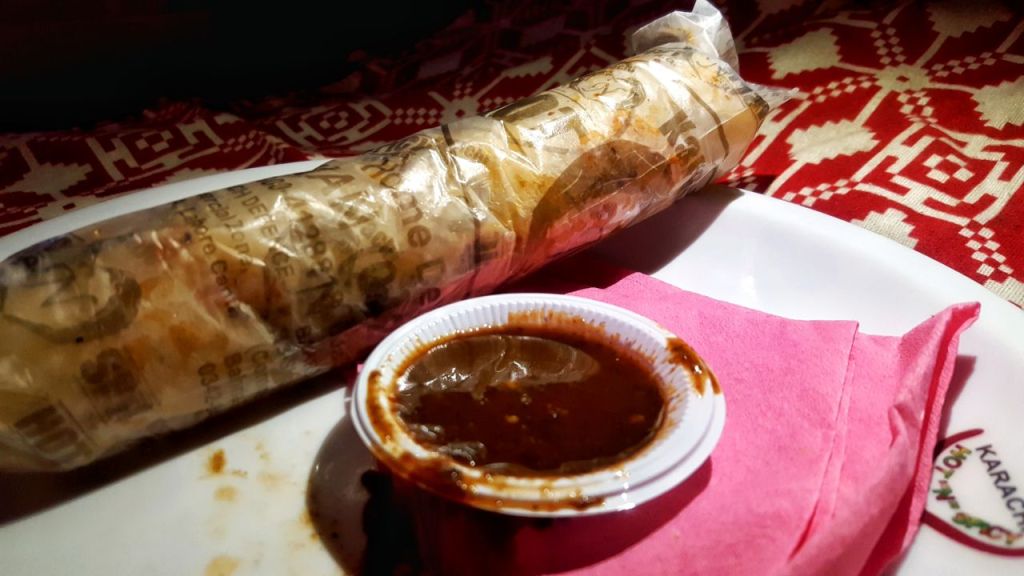 Each paratha roll had been delivered in a separate plate, along with two tissues and imli ki chatni (Tamarind sauce), a local favorite and clearly more valued than ketchup by the customers. The chicken rolls were slightly bigger than the beef one, which I would have expected the other way around. Overall the size was more than what I am generally accustomed to. Though our selection of food items was fairly similar, the texture and taste of all three things was different and so we did not feel like we had been cheated into ordering the same thing three times over.

The food was warm and the meat was tender. My favorite part though, had to be the oozing cheese. I have had my fair share of paratha rolls before, but not only was this a hearty helping and not to mention the ample amounts of cheese really did justice to my body’s prehistoric training of loading up on carbs. If you think that one paratha roll is not enough to satiate your tummy’s grumbling then you’re wrong; a mistake we almost made. By the end we had to call the waiter again and request a coke. He was back in two minutes with a cold beverage, which not only helped acidify our much needed stomachs but was also the cherry on the pie.

When you want to have a casual meal out, but still want the comfort of your own home, getting fatty food delivered to your car is heaven and also light on the pocket. This kind of pampering is exactly what I needed at the end of my day.

Overall the experience was very satisfying and the bill only came down to Rs.595 for three people! There was no artificially expensive pricing for our drink. We had a properly printed receipt which was not brought to us on special request, something I have not witnessed elsewhere. The plan was to go home and jump into sweet slumber though before the evening could feel complete, I had to buy a paan from Jaidi, but let’s leave that review for another time.