Every adult who lives in the Walled City, Gawalmandi, and Anarkali, has heard passing rumors about Heera Mandi [Diamond Market]. It may seem grotesque, with its dilapidated infrastructure today, but once upon a time, it used to be a recreational center of sorts for the Mughal elite, and, subsequently, for the British colonial forces. I had already paired up a poem to go with my debut visit to the infamous Red Light District of Heera Mandi:

So how did Heera Mandi get its name? The market was named after Heera Singh, a son of one of the ministers in Ranjeet Singh’s Royal Court, who ruled the Sikh empire before the British occupied the sub-continent. During the Sikh rule of Sher Singh, Ranjit Singh’s son, who succeeded his father, Heera Singh remained a minister in the Sikh Royal Court. Heera Mandi was also once referred to as Shahi Mohallah (Royal Neighborhood) as it stands close to the Lahore Fort. That Heera Mandi received its name from its beautiful dancing girls is no more than folklore surrounding what eventually evolved into the Red Light area. 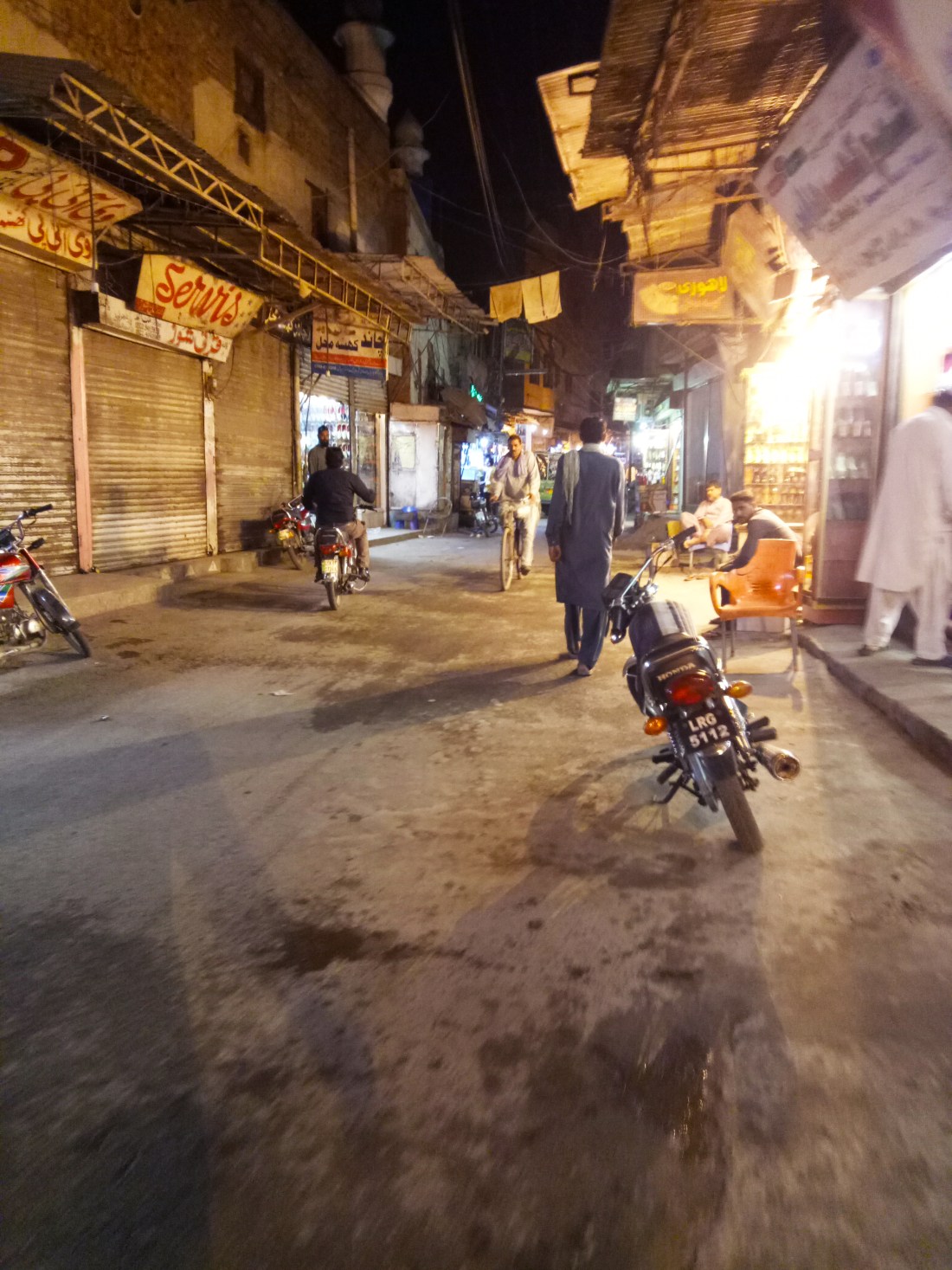 The elite of the Mughal era used to send their sons to tawaif centers, so that they could learn tehzeeb etiquettes and literary values. In those days, sex was not an essential practice; it happened accidentally as the concubines chose lovers for themselves. Over the following centuries, the classical concubine culture gave its way to prostitution, although an appendage of mujra and music stuck to it. During the British Raj, brothel houses were developed for the sexual satisfaction and recreation of British soldiers. The British gave the whole business structure, and considered it a necessary evil, despite the fact that their Protestant morality disallowed it.

The concubines eventually discarded their literary and dance activities due to the lack of demand by the public, and prostitution became mainstream. After partition, a number of Pakistani governments tried to curtail the culture of dance and prostitution. During the regime of Zia, operations were conducted to expunge the brothels of Heera Mandi completely, and, as a result, countless sex workers moved to different parts of Lahore. 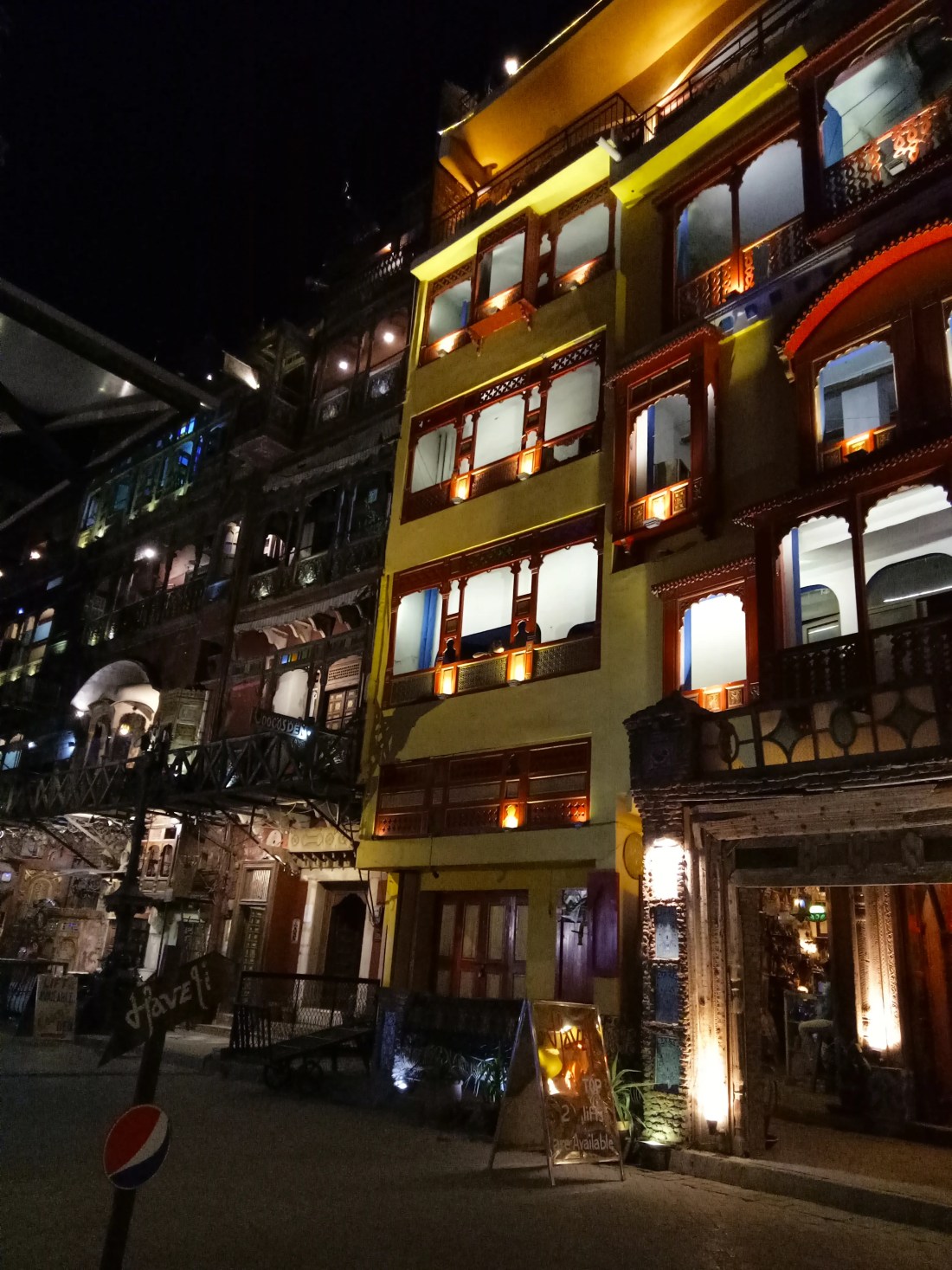 Before the sun disappeared into evening’s shroud, I left for Heera Mandi with a friend in an Uber. Because of the protests and sit-in in front of Data Darbar, we had to go around the back of Mayo Hospital and make our way to the Diamond Market through the crowded Shah Aalmi bazaar. After a number of stops, made worse by the deafening horns, we reached Pani Wala Talab Bazaar. The Uber dropped us off and we made our way on foot towards Heera Mandi. With the approach of night, shopkeepers were closing down their shops, except for the Food Street restaurants closeby. The thrill of the night had hardly started.

As I was going to the infamous area for the first time, known for prostitutes and thugs, my friend and I were anxious about the whole adventure. On the way, we stopped for a dhol (drum) shop, where a man was trying to configure the sound of a hand-made dhol. My friend told me that the street we were looking for, where prostitutes and pimps come out at night, happened to be close to Taxali Gate. My friend had been there before. On his previous visit, he had noticed a paan shop and a milk shop as demarcators.

From Heera Mandi Food Street, we went forth and started looking for the street. Rickshaws and motorcycles passed around and their noise remained suspended in the air. We were nervous and confused, so we walked hastily. The strange sensation that everybody was looking at us and knew about our intentions was unsettling. There were men of all ages, either walking or talking or sitting in front of some shop in the light of incandescent yellow bulbs. We walked a long way through esoteric alleys, until we reached Taxali gate. We had not found our street yet.

People selling food items, and sitting in their shops, especially the inhabitants of the area, were busy in their routine life. We talked frantically about how these people, most of them uneducated, think about the life of the prostitutes. From Taxali Gate, we walked forth and reached a forked road; one of these roads is known for its shoe and khussa shops. 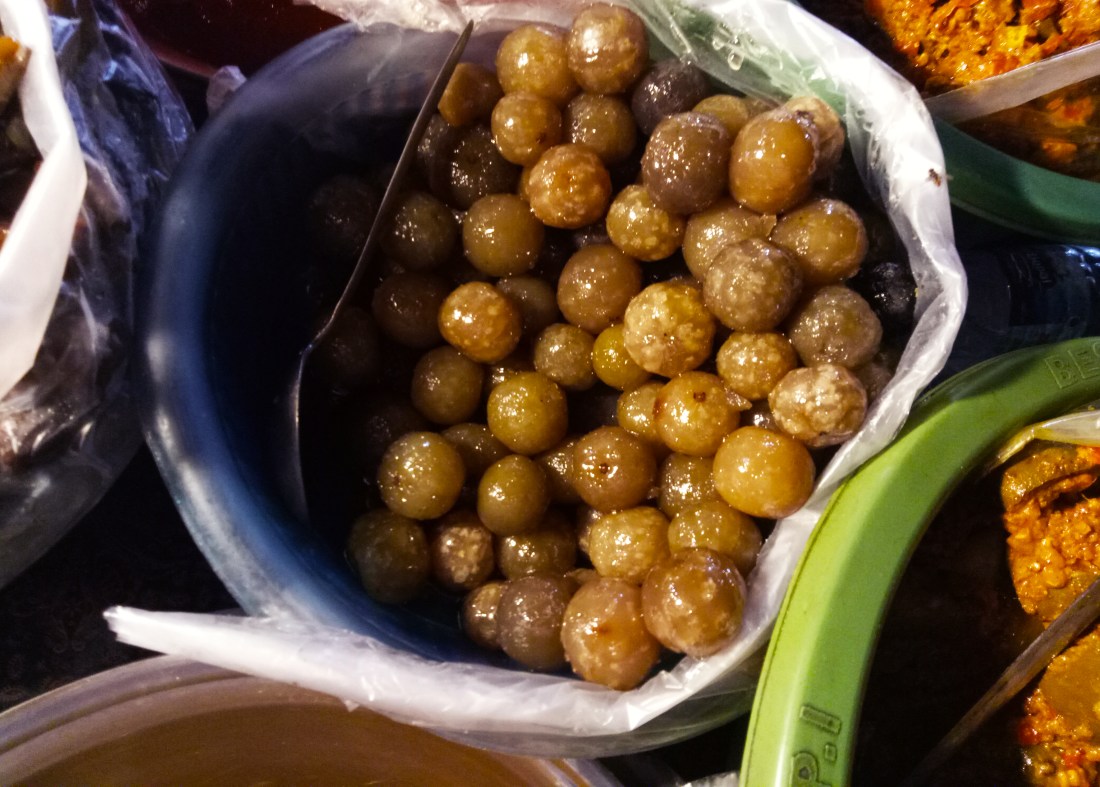 Walking in this area, we felt a wave of paranoia. We didn’t want to encounter police constables here, as we had heard various rumors of people having trouble with the law in these parts. The policemen in the area are notorious for being accomplices of the prostitution business, and are known to extort money from vulnerable visitors after blaming them for indulging in base activities.  While walking on that road, my friend suggested that we start smoking cigarettes and walk with a negative gait, suggestive of profligacy to invite pimps. I could not resist laughing at our desperate adventure, which we feared might lead us to a police station on a Friday night.

I smoked and walked hastily with anxiety welling within my body. A young man with a thin moustache came up to us and started walking beside us. He said, “Pajee tussin meno Shareef disse ais kar me puchyiaa nai. Punjabi b hai aur Pathani b.” [Brother, you seem like decent guys that’s why I haven’t asked you. We have Punjabis and Pathanis both.] Then, he told me how handsome I was and that he could arrange two girls for us without any trouble. He said that it would cost us a thousand rupees. We lied and told him that we were expecting friends, and left in a hurry lest policemen caught us there. In those few moments, I noticed an excessively narrow and dirty street, where women of different ages could be seen peeking through the doors.

We went to a tea stall and ordered doodh patti for ourselves. Until that moment, the idea of women selling their bodies in Lahore seemed like an exaggerated myth. But after I heard the young man talk about it in business terms, the morbid reality of the activity, worsened by the appearance of the dark dingy place kicked me in my soul. While trying to enjoy the tea, my friend talked about how these women are trapped in their bodies and in the narrow street, forever. In front of the little dirty tea stall, where we were sitting on wooden benches, an elderly man complained about the protesters, who want to make the country Islamic, although it is already Islami Jamhoria Pakistan. After having finished our tea, we decided to walk through the focal street itself and gather more information if we could. We walked around the block and entered the street with our camera-like eyes, trying to record everything.

There were not many lights in the grey street with double-storied buildings, where women of different ages could be seen. A woman called to us, “Bhai jaan! Awo pyaar karein.” [Brother! Come let’s make love.] The incestuous possibilities of her request alone made me cringe as we hastened forth. We did not intend to be tempted into the promiscuous hell of this street. At the end of the street, the pimp whom we had met earlier stopped us and started trying to convince us to choose a girl. 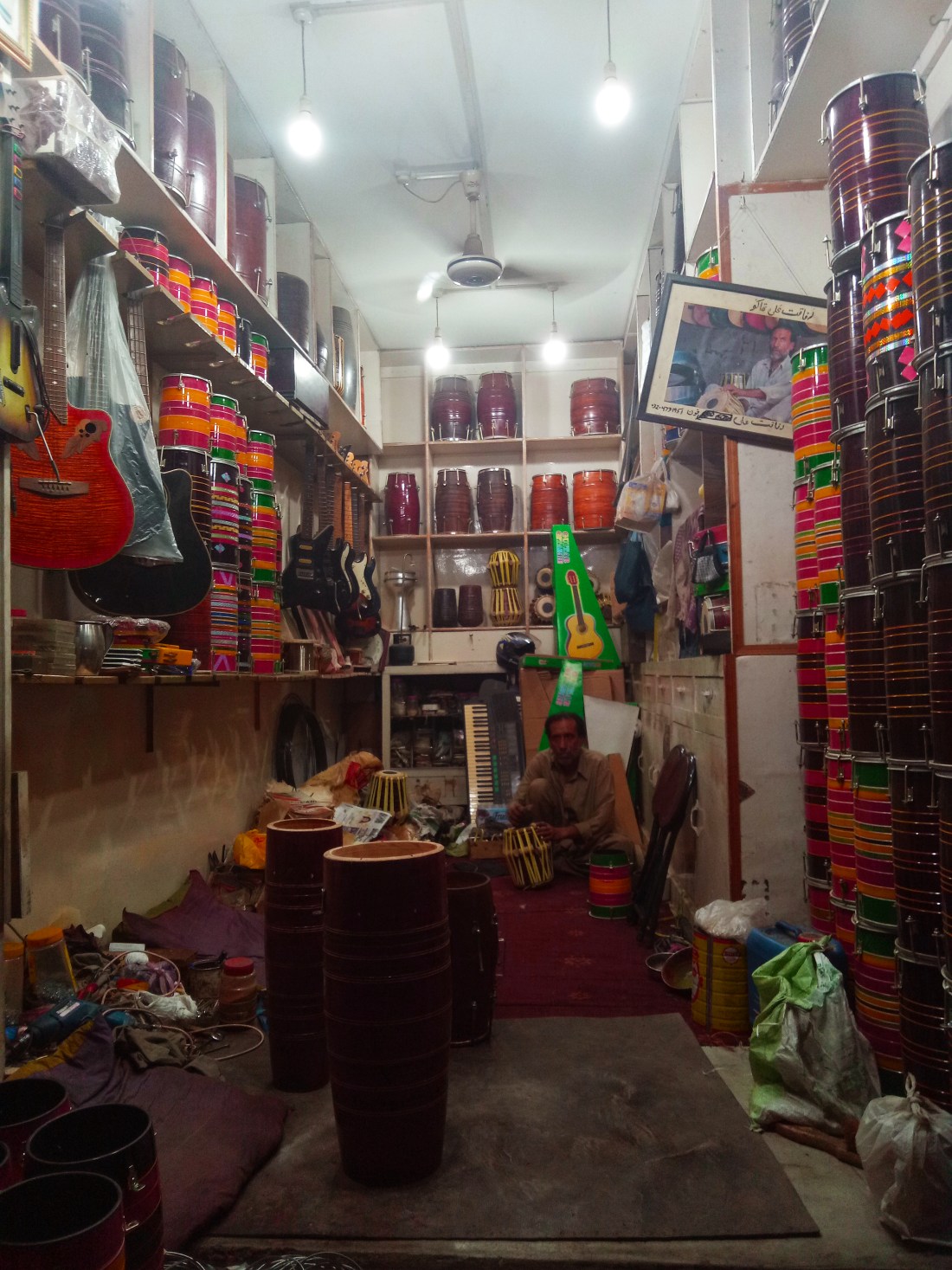 As we were there to collect information, I asked about the timings. He said that the brothels would remain open for another hour. Then, another pimp accosted us. He looked about 20 years old, and began a one-sided negotiation with us. Feeling overwhelmed by their demands, we spoke to each other in English and decided to leave. But the pimps would not let us go and started talking about how we owe them money for ‘chai paani’ [tea/water = bribe]. We refused plainly and told them that we had not done anything. The second pimp showed us his scarred hand and started hurting himself with a sharp pin. His whole hand was riddled with scratches from wounds that he had inflicted on himself to make visitors pay him. He kept saying, “Yeh baat zehn te rakheein, me dalali k bagher nae jannrr dena” [Just remember, I’m not going to let you go without a brokerage fee] I could hear the calls for Isha prayer in the background, through the commotion of vehicles and rickshaws.

We refused again. The two pimps started playing good cop and bad cop, treating us like suspects in an investigation, something that I understood only in retrospect. The second pimp held the cuff of my shirt and would not let me go unless I gave him a thousand rupees. The first pimp took my friend aside and threatened him with police action. My friend asked me to give them two hundred rupees for ‘chai paani’  and get it over with. As I was conscious of police patrolling the area and could not afford a physical fight with a pimp, I gave him hundred rupees and asked him to let me go. The young pimp was offended and started demanding a thousand rupees again. He started screaming and abusing loudly, while holding the cuff of my shirt firmly. We forced walking away but they remain latched to us. Fearing that they might call other pimps or lead us down some dark alley, where they would snatch our mobiles and wallets, I thought it better to give them the money and save ourselves.

We had only walked a hundred steps or so when two policemen appeared around the corner. One of them asked us not to come to the area at night and told us that students must not visit such odious places. From there, we made our way to the Fort’s Food Street with the help of Google Maps. My friend told me that his feet were still trembling. My heart was beating quickly. We rested for a while on the benches in front of Cocoo’s Den. I could not believe what had just happened.

On the way back, our Uber driver talked about the notoriety of Heera Mandi, and recommended, much like the policemen, that we not frequent such places. I lied that we had only visited Lahore Fort. The driver wanted to continue the conversation anyway and told us how three major passions can ruin a young person’s life: religion, wine, and women. At that moment, a rickshaw pulled up right beside our car at the traffic light. Through its flimsy housing the song Mein Sharabi Hoon, Mujhe Pyaar Hai rang out. All three of us laughed.