The beauty of The Walled City lies in its hidden gems, not just in the architectural beauty of its historical sites. Every nook and corner of this part of the city exudes an entrancing aura. The best recourse, however, for whoever wishes to explore the stories veiled in these streets, is to never set a destination and let these alleys guide you to unseen sights. One such gem is Haveli Nau Nihal Singh.

Haveli Nau Nihal Singh has now been re-purposed as a school, with stunning architecture and intricate design. No Google Maps necessary, you’ll want to get absolutely lost for an experience of a lifetime. Our writer missed out on some potential treasures. 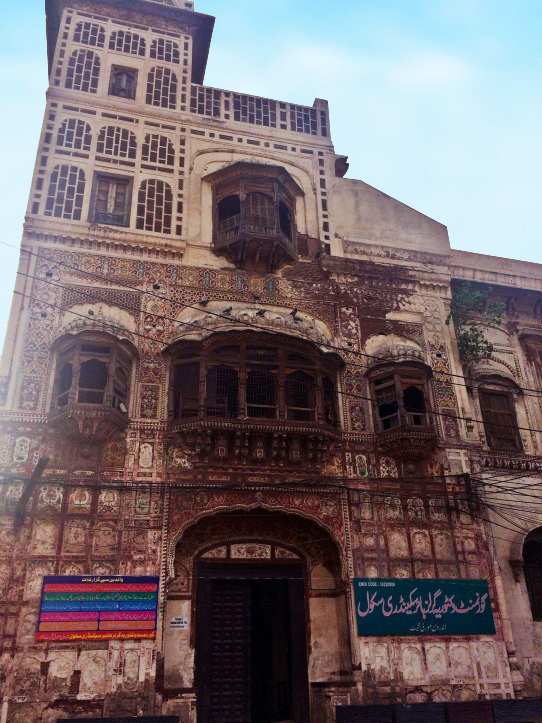 At 7:15 AM on a Saturday morning, my friend and I found ourselves standing in front of Haveli Nau Nihal Singh. Raja Nau Nihal was the grandson of Ranjit Singh who had not only founded the Sikh empire but also built this beautiful mansion, squeezed between Mori Gate and Bhaati gate.

Visually speaking, the front of the building was enough to captivate us for a while. The dark brown jharokas jutting out from the top of the haveli gave me a flash of the ‘jharoka e darshan’ ( ‘public addresses’) that would be given to audiences gathered outside . The intricate design and the paint on the wall is typical of Mughal architecture.  Even though most of the dull red and yellow paint has now chipped off to reveal the plaster within, it makes the off-white jaalis of Haveli Nau Nihal Singh(window screens) more prominent. 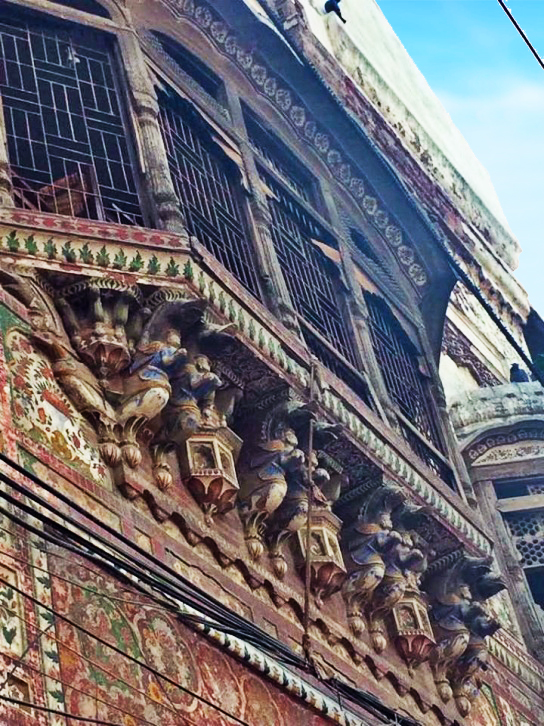 While there was no mention of who the haveli belonged to, a board attached on the right side of the facade read Victoria Girls high school. I wondered if this was the right way to preserve a historical site of this eminence.

We realized that my male friend might not be allowed to go inside, but since there was no security guard restricting us, we decided to take a leap of faith. As I entered the half-opened, carved wooden door, to enter a dark room, I was immediately caught by the entrance towards the courtyard of the haveli. What was I looking at? A mini set from a Sanjay Leela Bhansali’s movie? Or an ‘aangan’ from one of pre partition’s residences ?  So spacious, so airy, so inviting. I could totally use a pishwas and a sharara, some bangles on my wrists and a net duppata to twirl around with in the middle of the courtyard and sink into the environment. 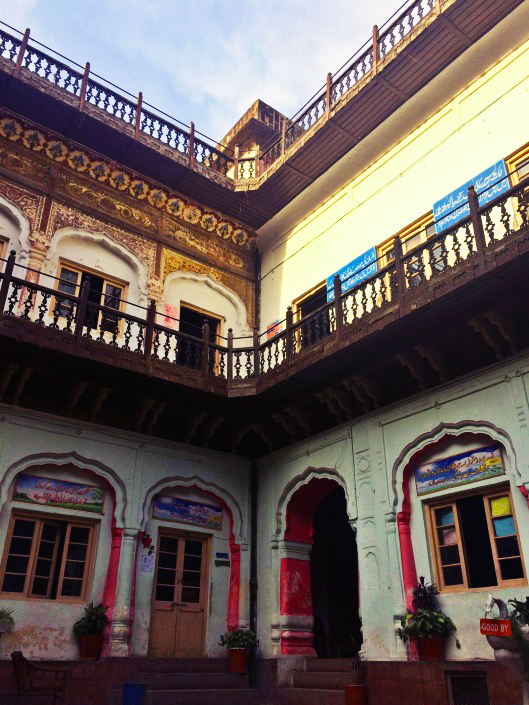 I felt nostalgic for an unfamiliar era,  a time where open spaces like these were full of the  tattle of teenage girls , women sitting on chaar pais and smoking hookah, children running around from pillar to pillar, and lightening up the entire building with their diddy laughs. But I was in fact looking at a time, long before that. The time where this courtyard would be lined with wazirs,their heads bowed down in front of the king. This area of the haveli retained the throne of the Raja and was the reflection of his magnificence and the endless power he bore. Such would have been the grandeur of Raja Nau Nihal, had he not died at the young age of 19.

His residence – that I was now standing inside of – had sustained its pride despite the neglect it had borne When we saw a backpack laden girl in ink blue uniform and white sash entering the school, we realized it was time for us to wrap up our tour of this haveli as soon as possible. There was too much to explore, and time was of the essence . This was the haveli’s inner courtyard, which was surrounded by numerous classrooms. Some were in dismal conditions, while others were relatively well kept. Each class was established in expansive rooms, with a whiteboard and two seater wooden benches lined symmetrically. I pictured myself sitting on the bench, listening to the tales of the Raja’s life and staring out the windows into the happenings of the court yard. A beautiful narrow staircase guided us to the second story, also occupied with classrooms and enclosed balconies. However, these looked newer and allowed more sunlight in. 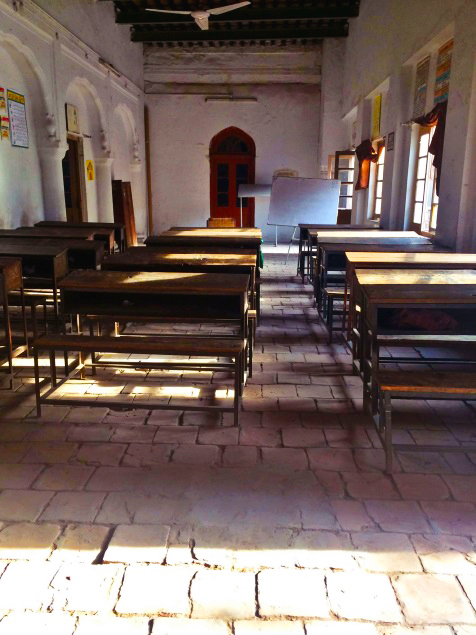 A few more steps up the ancient staircase and a walk through the wooden doorway was all it took to step out onto the terrace.  A white, non-functional fountain was placed in the middle, and pigeons peacefully rested on its edges. Floral paintings of repeated configurations beautified the short walls and added to the vastness of the area.  This floor of the building overlooked the entire Walled City, giving a view of shabby, unfinished houses that stood neck to neck with each other. Their presence complemented the haveli’s existence. While the terrace had some classrooms as well, what caught our attention were two locked doors in one corner.Alas, before we could figure out a way to see what was inside them, we were interrupted by sounds of footsteps coming from the staircase towards the terrace. It was 8 AM. Time for the Raja’s residence to be transformed into a modern school once again. 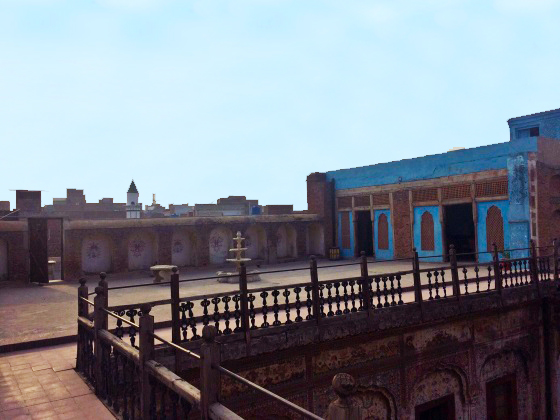 We rushed downstairs, hoping to avoid teachers or guards, who might have arrived on the premises by now. We now stood outside the building, taking it in one last time, making sure that we had not missed anything. 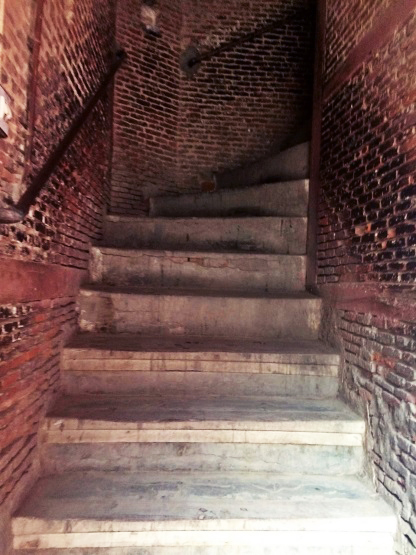 It’s always good to interact with other visitors when visiting historical sites like these. A girl who had been standing outside the haveli handling her camera was still there when we left. I approached her to initiate small talk and I’m glad I did.

A student from BNU, she was here to make a time lapse video of architecturally rich heritage for her final year project. She informed us about the hidden treasures behind the locked doors on the terrace and insisted that we must see it at any cost.  She told us that the keys to the doors were in the custody of a family living behind the haveli. We tried requesting said keys, but were eventually refused entry because school was now in session. 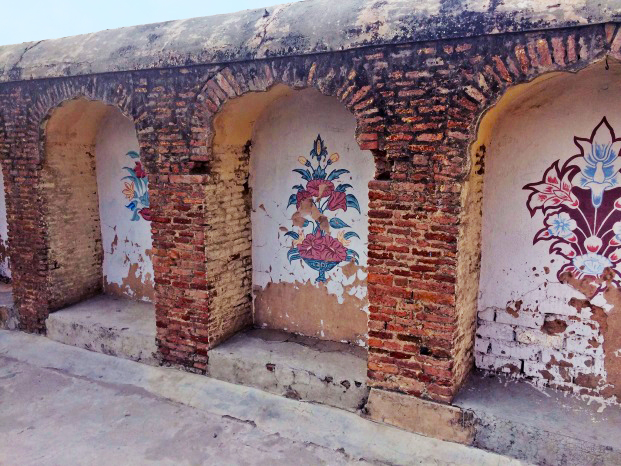 We were later told that these rooms were a part of the ‘Rang Mahal’ of Haveli Nau Nihal Singh, that still retained original paintings from the Mughal era. Its ceiling was engraved with pieces of mirror and designed with floral frescoes while its artistic walls still maintained their stucco carvings. The rooms remained locked to preserve the antiques, and to avoid unnecessary disruptions and the mishandling of treasures.

As we walked away from the haveli, I felt that we might not have explored the haveli entirely. Some historical secrets still lay intact under the façade of the public school. It is undeniable, the fact that Haveli Nau Nihal Singh is one of the most impressive surviving havelis in Lahore.