On the boundary of New and Old Anarkali, you’ll find Hafiz Juice Corner. A weird angular structure, that would appear uninviting to any fleeting gaze. However, there are some people (including myself), who have traversed the very soul of this awkward juice point. We know how it opens its heart to the seeking hands. And here, I reaffirm the platitude that beauty is in the eye of the beholder. In case, you did not learn proverbs in 8th grade by rote, ‘beholder’ means someone who sees or observes someone or something. 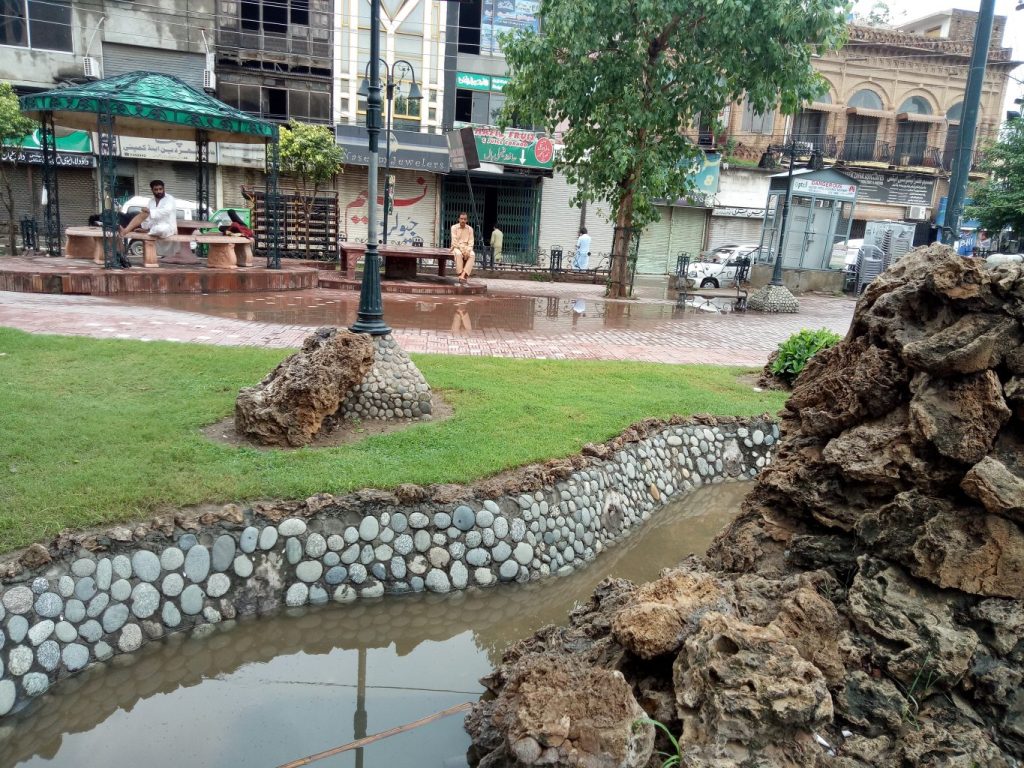 Hafiz Juice in itself is no more than two small circular rooms and a few tin tables and plastic chairs. One of the room is used by workers to store their fruits, prepare shakes and juices, and wash their utensils. The other room happens to be occupied by the manager, who collects money from his waiting staff behind a marble counter. Right outside the shop, there is Artisan’s park, a small place with a dozen benches and raised platforms, a few trees, small lawns, and a tiny artificial mountain. The Juice Corner itself lies within the Park, which is rendered inconsequential by the legendary Hafiz Juice Corner.

Hafiz Juice Corner, apart from shakes and juices, stocks golgappas, chai, and fruits are delivered from the nearby Anarkali Food street. This amalgam of desi café/juice corner remains open throughout the day, except after 03 AM, when the workers scrub and wash the floor of Artisan’s Park.

Here, customers commence pouring in quite early in the morning and continue doing so well towards midnight. Their flux turns more fervent after sunset, as the heat subsides and sitting outdoor becomes bearable. At night, some of the grass patches and benches are occupied by homeless men and women, who sleep there innocuously. 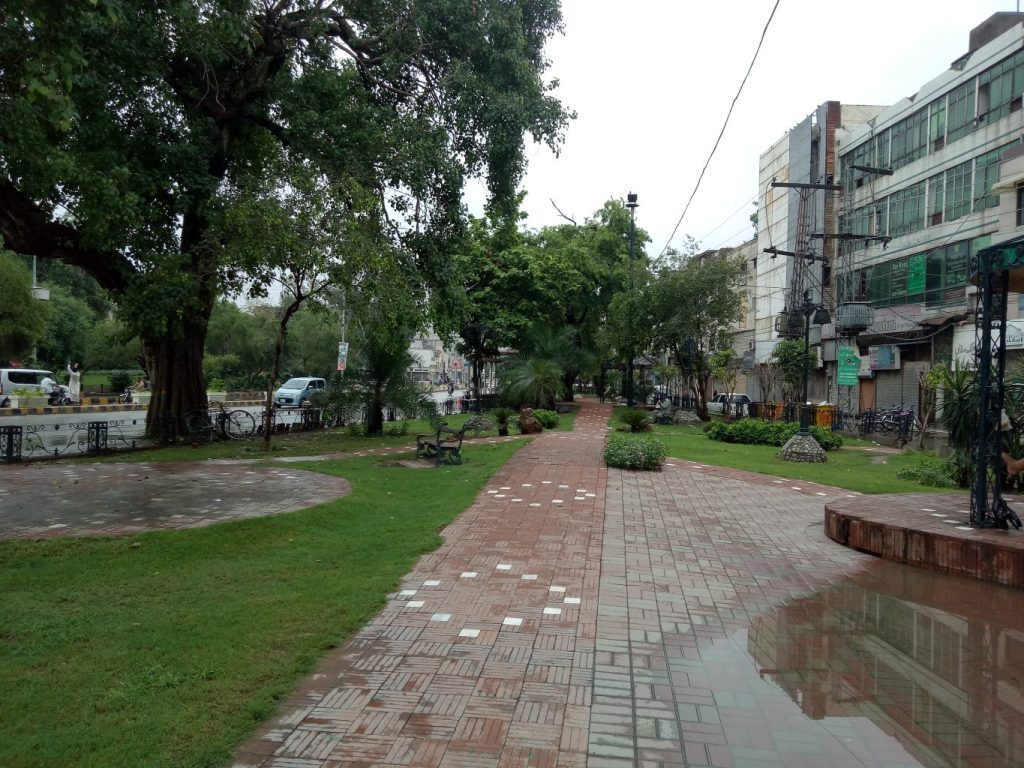 I went to Hafiz Juice Corner around 9 pm to meet my friend Z, whose birthday celebration I had recently missed. I wanted to give her a birthday gift and engage in the usual tête-à-tête. Very soon, she brought up the subject of my birthday, which has become an unconventional absurdity among my friends.

A few years back, when I came to Lahore, I found out that my new friends celebrated their birthdays every year. Quite disconcerting. My parents living in village did not remember my birth date and nobody celebrated my birthday ever. For two years, I indulged in birthday celebrations without evident interest. Soon, my peasant heart rebelled as it was not conditioned to feel joy over some odd day of the year. During the third year, I told my friends that I was born on a forgotten day and refused to pretend happiness over the loudly chanted wishes. The following year, I grew impudent and choose myself a new birthday date (1 January). I invited my friends for a humble dinner without balloons and gifts. Since then, I choose myself a new birth date each year with utmost gratitude towards my parents.

Traffic rushed relentlessly on the Mall Road, while we talked about everything: from books to childhood memories and present struggles. In intervals, the usual stock of beggars appeared with outstretched palms and began floating from table to table. At one point, a waiter started fighting with a female beggar, who was asking for money with unusual stubbornness. A few little children, with innocent faces, also appeared with their drawing books for sale. Two young girls, who sat close to us on another table, conversed mercilessly in English. The other customers eyed them with hostility and displeasure. 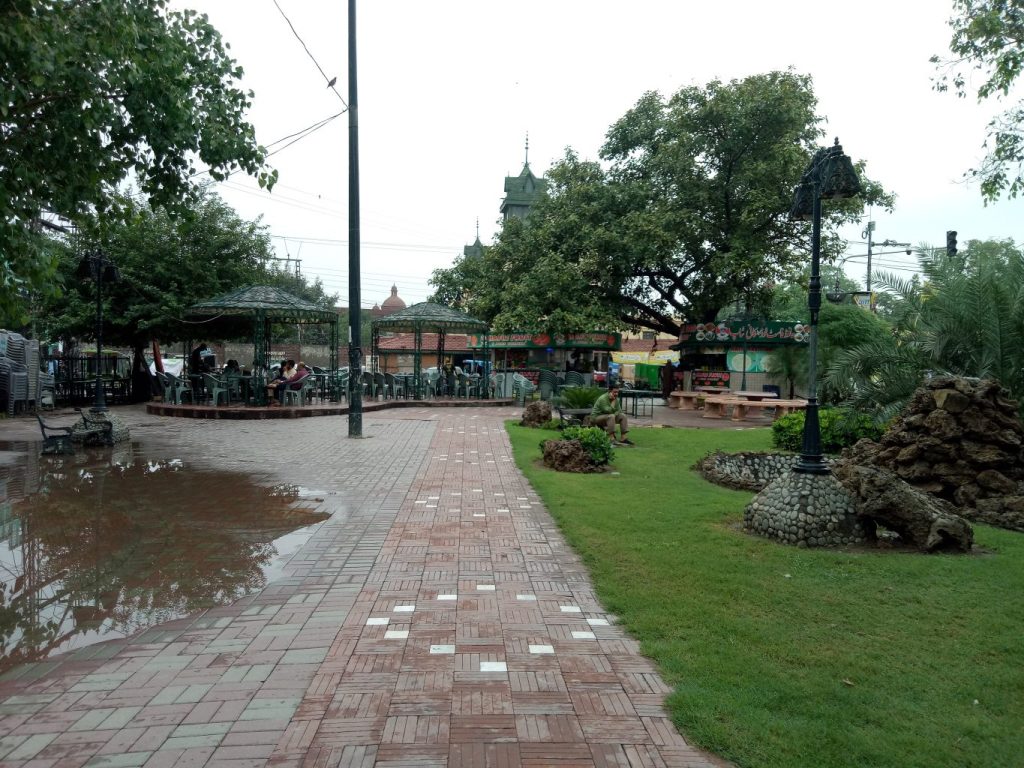 Hafiz Juice Corner is visited by people belonging to different segments of the Lahori social continuum. College students, workers from the close by restaurants, burka-clad women and young student, junkies-turned-shaking-beggars, homeless women and men, children selling drawing books, prosperous families with fat children, couples and friends from the nearby universities and so on.

Perhaps, this is one of the main reasons why I love the corner because it exposes one to the social life of this part of the city without any prejudice and hesitation. Purnea told me that her sister, who studies at NCA, spends her entire day at the famed little juice corner.

Suddenly, the Lahore Encroachment Authority vehicles sauntered into Anarkali with aggressive intentions. Food carts, tables and chairs, sugar cane machines ran about awkwardly and tried to hide in the nearby streets and alleys, like mice threatened by cats. The metaphor is worn out and stale but I couldn’t think of a better one for the occasion. A backhoe bit its teeth into the billboards of several grey shops, while a crowd gathered to enjoy the sight. Have you watched Three Billboards Outside Ebbing, Missouri? One amazing movie.

A grey cat ran above the shops frightened by the approaching din of the excavating monster. The masseurs kept circling about like moths, looking for customers, who wanted to be oiled and massaged. The specific rhythm with which they shake their oil glasses is their caller tune.

Later, my friend left for her hostel and I kept sitting there alone (as usual). The full moon rose high above the buildings of Anarkali. I remembered a few verses of Insha Ji from my teenage days, back when I was a sentimental ‘poet’ who plagiarized the metaphors of others and used arcane vocabulary:

[Yesterday, it was full moon and you were celebrated the whole night

[I was also there and everybody asked me too

I laughed and remained silent, reticent about your secrecy (veil)]

I ordered myself some more tea, at Hafiz Juice Corner, to help me through the night.