Visitors are usually able to access only the Badshahi Mosque and the Lahore Fort when visiting Taxali Gate. In the same compound, however, are Gurdwara Dera Sahib and Ranjit Singh’s Samadhi: two Sikh sights that represent an important chapter in Lahore’s long history.

Despite being an outsider to the Sikh community, our writer received special access to this closed-off site and extensive insight into the structure and its intricacies.

The gate is kept closed, and most often, a guard standing outside does not permit you to go in. They always claim the space is under renovation. However, on our latest trip, we politely insisted; it also didn’t hurt to have a friend from Hong Kong with us at the time. After simply looking at her, the guard understood that apart from a personal tour, we also wanted to show a foreigner all that Lahore had to offer. He let us enter and it was smooth sailing after that.

The minute you step in, the women are told to cover their heads and the men are given bandanas to do the same. According to Sikh code of conduct, your hair must not show in a place of worship. Once we were appropriately attired, an extremely courteous guide was assigned to our group. I owe most historical details narrated here to this kind man.

On your right, you can see the Gurdwara: a small shrine topped with a gold onion dome. It is the final resting place of the fifth Guru of Sikhism, Guru Arjan Dev. According to legend, Emperor Jehangir asked him to convert to Islam. When he refused, he was drowned in the River Ravi that used to flow at this spot in the Early Seventeenth Century. Despite this terrible tale of intolerance, it is part of tradition for Muslims to offer Surah Fateha (opening chapter of the Quran) at this shrine. This stems from another story about the Guru: his legendary friendship and association with Baba Mian Mir – a Muslim saint. The two promoted interfaith harmony and emphasized the overlapping beliefs in Sikhism and Islam. The contrast between these two tales really struck me. 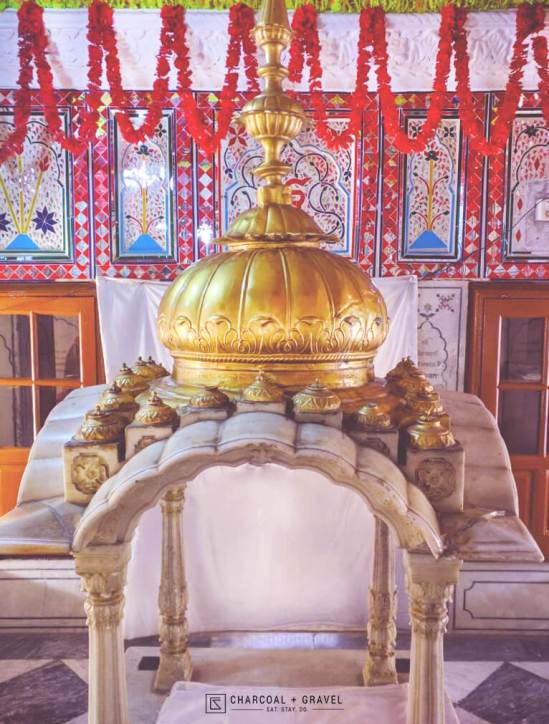 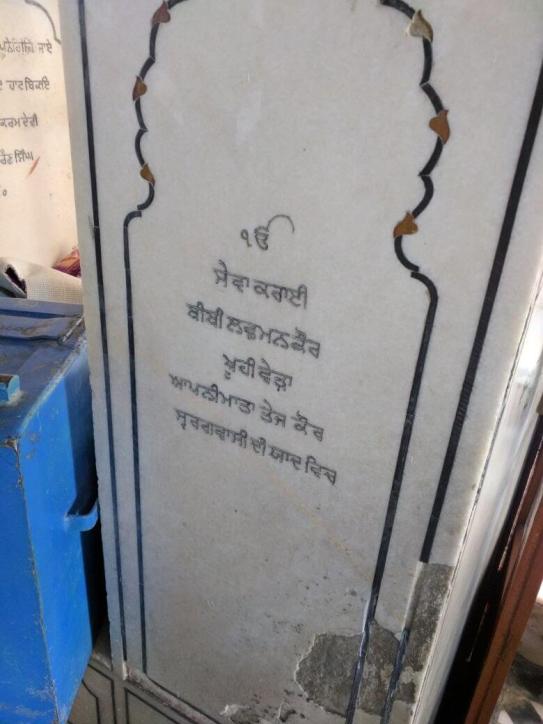 The actual room containing the altar has a low ceiling and we had to bend to go through the small entrance. It is an enclosed space. The inside resembles a Sufi shrine. The only difference is in the marble walls: they have colorful floral patterns and inscriptions in Gurmukhi script all over them in black marble. After admiring the interior for a little longer, we stepped out into the sun and saw a deep trench with wet mud to the right. This was a symbolic indication of Ravi’s prior presence here.

Attached to the Gurdwara is a langar (communal kitchen) and dispensary. Our guide informed us that it is mandatory for every Gurdwara in the world to have both. Anyone, regardless of the religion they follow, can get free food and medicines here. In fact, if the elders and caretakers of this shrine see you, they encourage you to at least have a taste of the food. It is a mark of hospitality and an attempt at unity.

We left the Gurdwara humbled and satisfied by the warmth, love and purity that the space exudes. Seemingly small anecdotes about the Gurdwara and history of Sikhism in the region enriched our understanding of not just this great faith, but also the broader narrative of the city of Lahore.

Tags:
A Page out of History, For the Squad, Instaworthy
Share: