I visited Greater Iqbal Park on the eve of first Ramzan with my friend Armaghan. Armaghan requires an introduction to do him justice; he hates eagles, feels the opposite of love for Iqbal, and considers his poetry, with unabashed prejudice, no more than pretentious and verbose rigmarole. I often wonder if he learned Persian for the sole purpose of dissecting Iqbal’s Persian works like laboratory frogs. Despite my friendship with Armaghan, I have high regard for  Iqbal’s works and went to the park with that sentiment.

Greater Iqbal Park is the hallowed ground where the Pakistan Resolution was passed, in the summer of 1940. The park lies surrounded by the 13 historical gates of the city, and therefore happens to be the heart of Lahore. 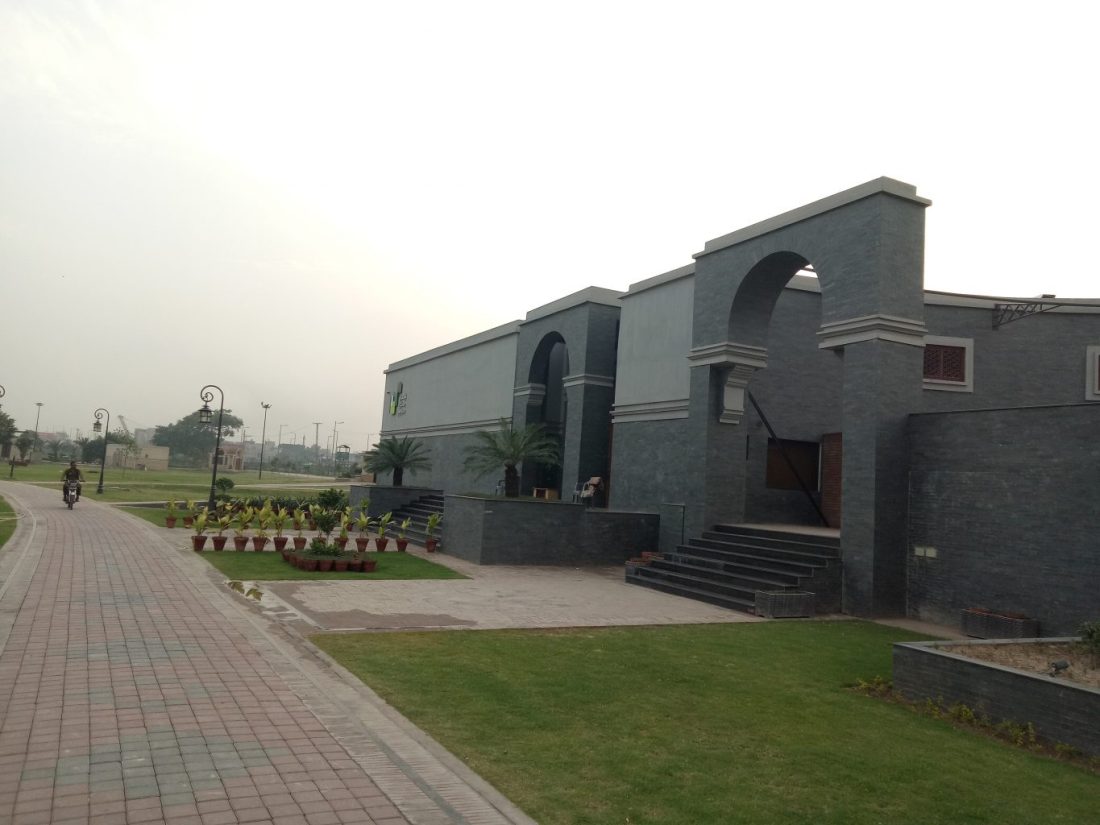 Greater Iqbal Park, located at the fringes of Lahore Fort and Badshahi Mosque, houses Minar-e-Pakistan, where the Pakistan Resolution was passed. Of course, every sane and obedient student of Pakistan Studies knows that. After its recent expansion, the park now spreads over an area of 125 acres and includes a lake, library, soft rail, food court, an open-air gym, and an 800-feet high musical fountain.

We heard the unmistakable sound of dhol as we entered the park and instinctively walked towards it. Two young men were beating drums outside a shrine in the park while gesturing to each other in strange ways. A congregation of people walked back and forth within the park. Some families had gathered on grass patches with their food containers celebrating their last picnic before fasting for a month. Several men slept under the trees throughout the park. The park serves as a dating spot for the people living in the vicinity. In one of the huts, a man lay on a bench with his head on a woman’s lap. 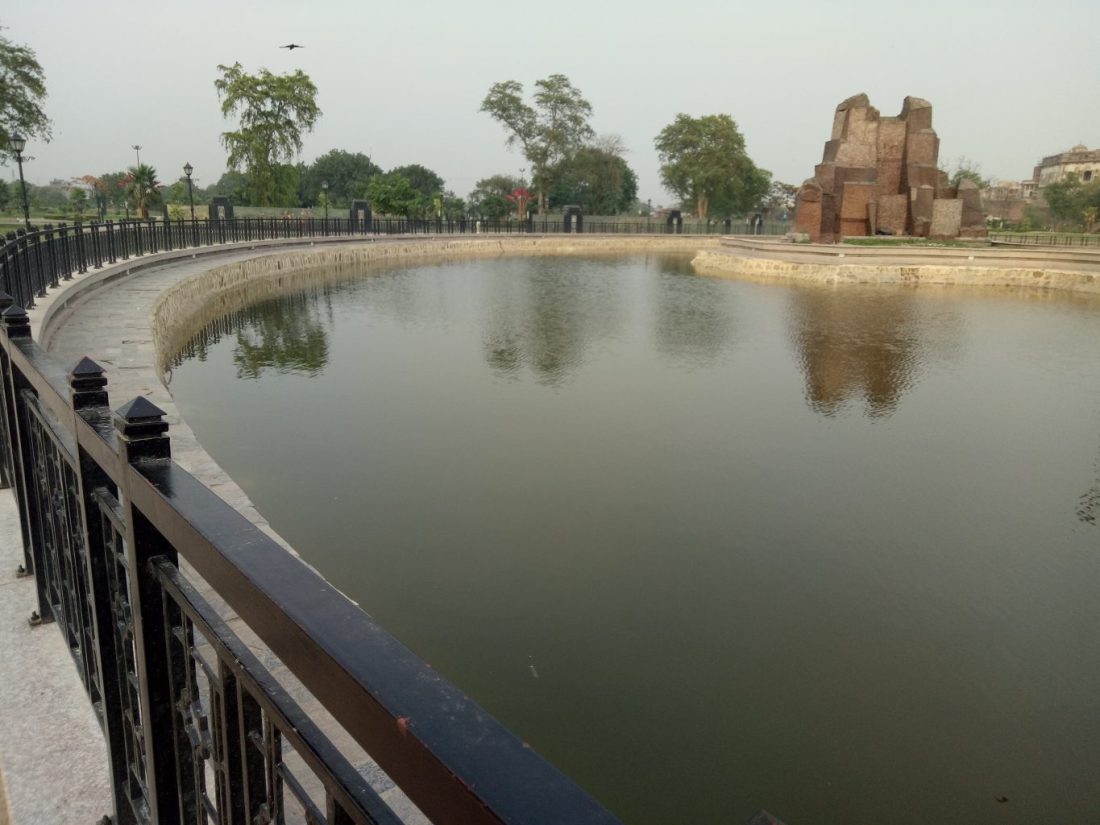 Armaghan could not resist his contagious cynicism and commented about how everybody had come to Greater Iqbal Park to take pictures. Wandering around, we passed the erect grass figure and the water lake, with the fountain for its nucleus. I saw Minaar-e-Pakistan from a close distance for the first time outside of books and pictures. The milky shine of the minaret has now turned turbid, stripping it of its historical elegance. 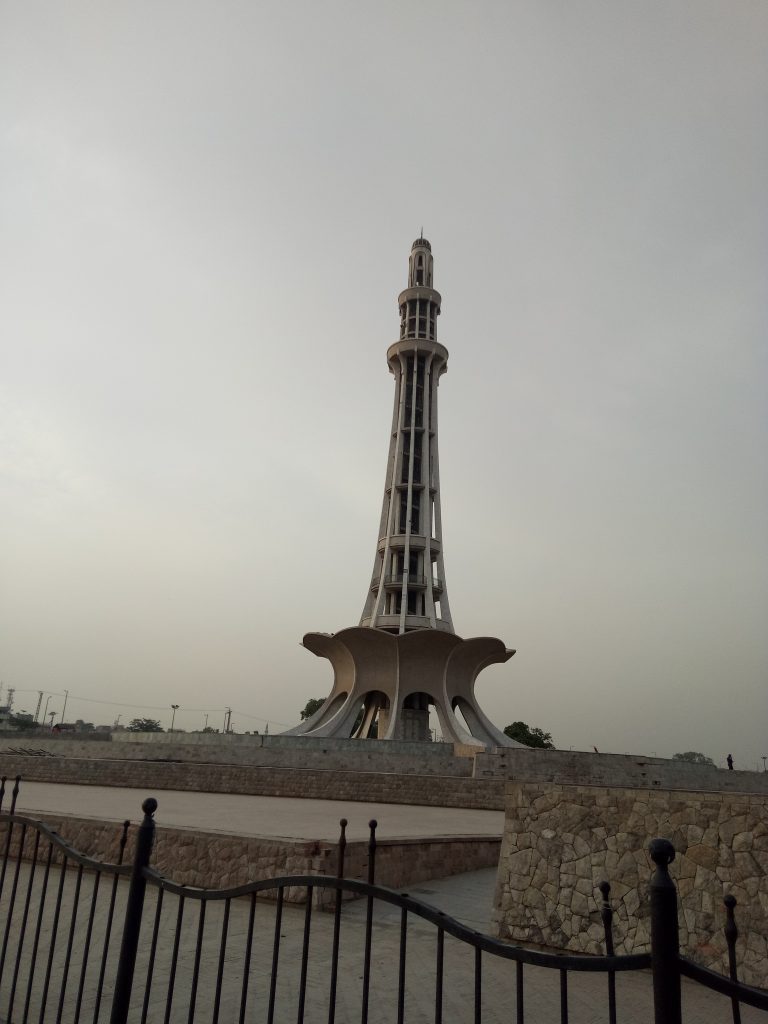 Close to Minaar-e-Pakistan, an elderly security guard refused us entry to the courtyard of the tower, while puffing cigarettes with enviable indifference. We sat on a bench to restore our energy as we had walked around half of the park by now. An elderly man and a woman with silver in her hair walked past us and fought a battle of words. Suddenly, the man started abusing the woman. He called her a ‘bitch’ and ‘sister-f****r’. The woman did not hold back her wrath and called him ‘sister-f*****r’ and ‘pimp’ right back. He then told her that he was not frightened of her. She shoved him using her shoulder first and then took off her slipper to teach him a lesson. The man calmed down and protested in a comparatively dim voice now. Armaghan felt that we had missed the main event. 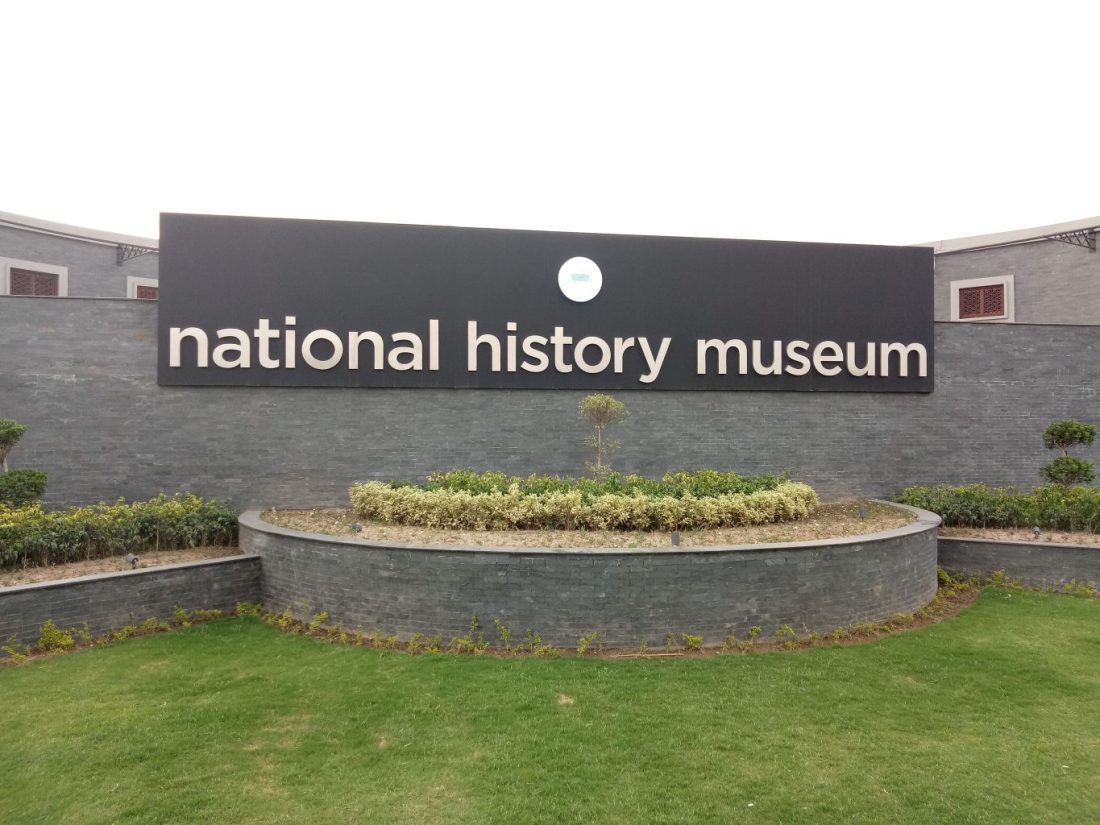 We walked towards the newly built National Museum and, to our despair, found it closed, with sentinels hovering outside like wasps. On the way back to the water lake, I took a shortcut and walked over the turf, assuming it would be dry and firm. So when one of my feet went down in the soft ground, I pulled it out to see it soiled. Armaghan and two little girls laughed and giggled, while I limped with my golden foot.  I asked my friend to walk around, while I washed my feet in the fountain underneath Sir Syed Ahmed Khan’s portrait. I kept sitting on the marbled periphery of the fountain. The sound was soothing, like the waterfall in my village. A security guard descended upon me like the devil himself. Apparently, I was too close to the water. Greater Iqbal Park, ladies and gentlemen. 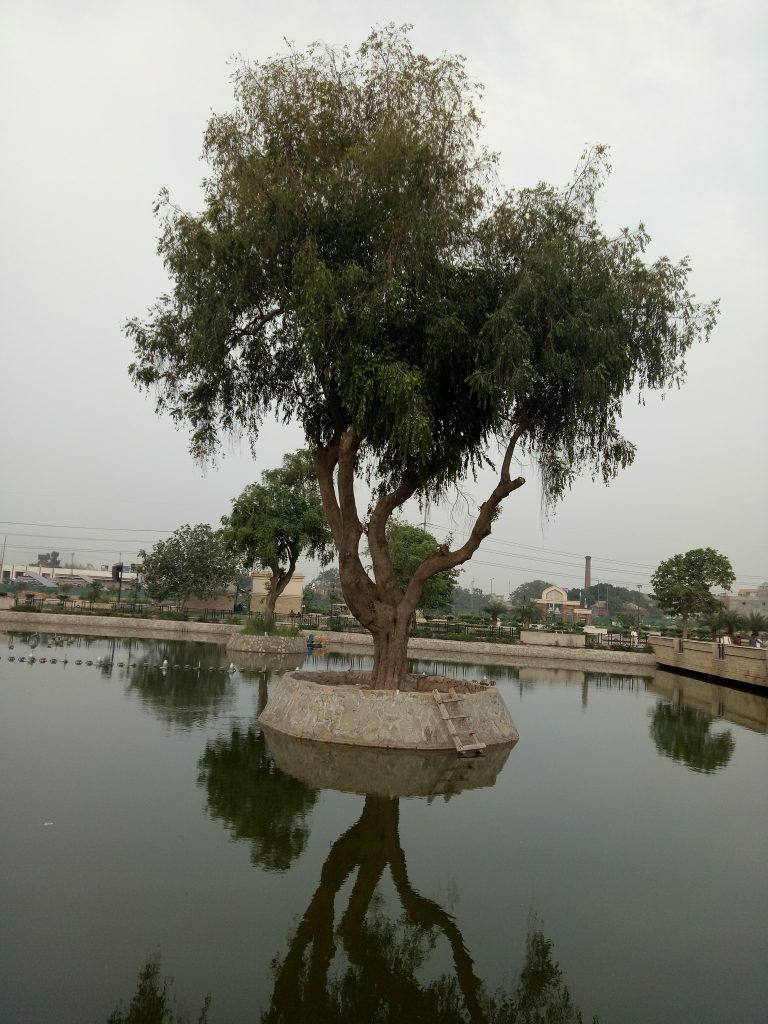 I moved on and sat a little distance away from the food court on a wooden bench. I texted Armaghan my location. While I looked around, three girls came and sat on a bench a dozen feet away. Slipper woman crossed my path once more, this time with a bottle of water. I stood up to see if Armaghan was anywhere close. Then, I noticed that one of the girls on the bench was observing me; I could feel the weight of her stare. I returned the stare back momentarily and felt embarrassed as if something was wrong with my clothes.

After few minutes, Armaghan returned.  I told him that I was not sure if the girl was harassing me or I was harassing her. He replied, “Well, go over and talk to her to save yourself the confusion.” I accosted the girls and introduced myself. The girl in question introduced herself and her friends. To break the pause, which ensued inevitably, I commented on the renovated condition of the park. Then, I mentioned that I owed my presence in Greater Iqbal Park to the soul-killing job of a writer. Evidently anxious about making a conversation with perfect strangers, I tried to be funny and told them how my vampire-like editor visits me these days instead of nightmares. They laughed, or pretended, at least. 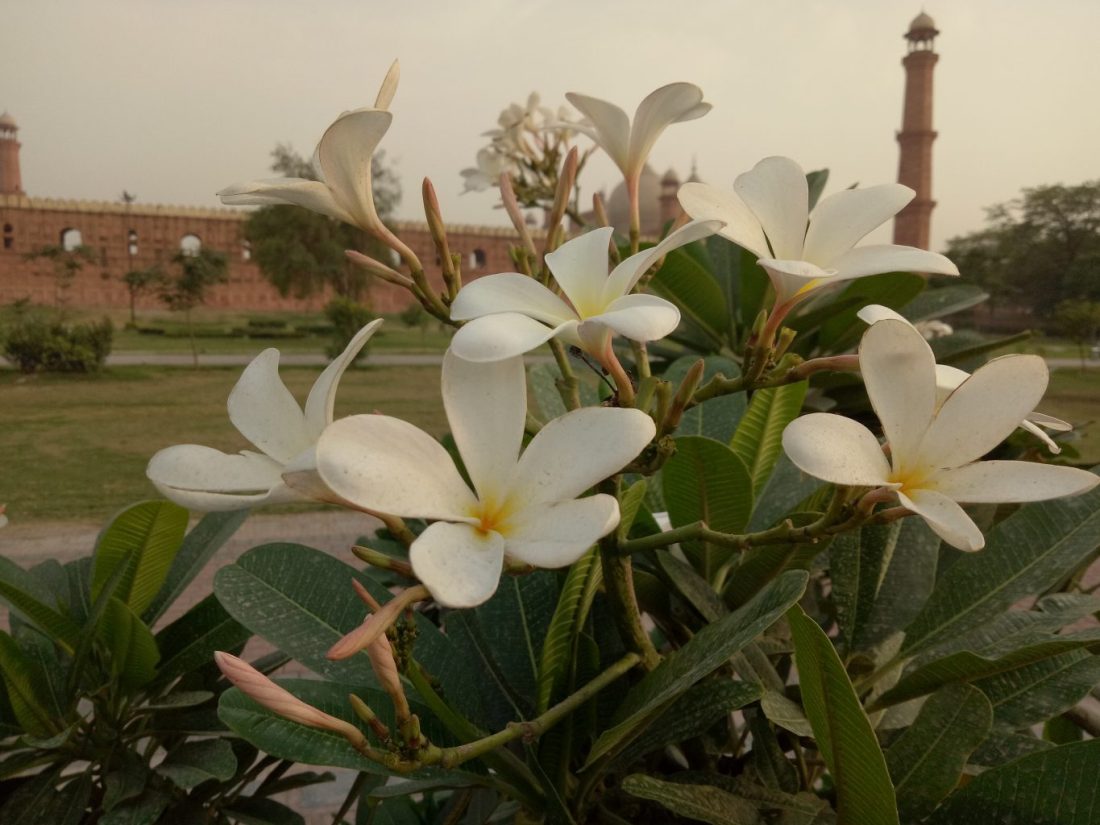 Of course, I later pacified my editor, as he did not like my joke at his cost. He’s overly sensitive like that. I assured him, “Behind every good writer stands a great editor.” He smiled for five long minutes with the intensity of sunlight while I coughed to clear my throat of the flattering fart.

We walked until the sun sank behind the trees.

Tags:
A Page out of History, Instaworthy, The Great Outdoors
Share: