Last week, I received my first letter through GPO Lahore.

My friend Hammad, who had returned to Pakistan recently, wrote to me after I had not heard from him in over a year. With his permission, I quote the first few lines of his letter:

Corrupted by the romance of rains and the inextinguishable itch for solitude and colors overflowing the broken brim of youth… I realize how carefully I reconfigure the surrounding physical world into paintings and vistas, so that the sickles, ropes, and crosses, which lay siege to my heart, could be fended off. After all imagination and not reason, redeem our threatened beings of the squalor in which we float like God-kissed amphibians.

I took my time reading it and eventually sat down to respond. Clueless about the intricacies that go into mailing a letter, I asked around. Eventually, I reached the GPO Lahore- a mile away from my residence- to post the letter.

GPO Lahore is assumed to be an archaic institution, Noor visits it for the first time and notes down his observations. 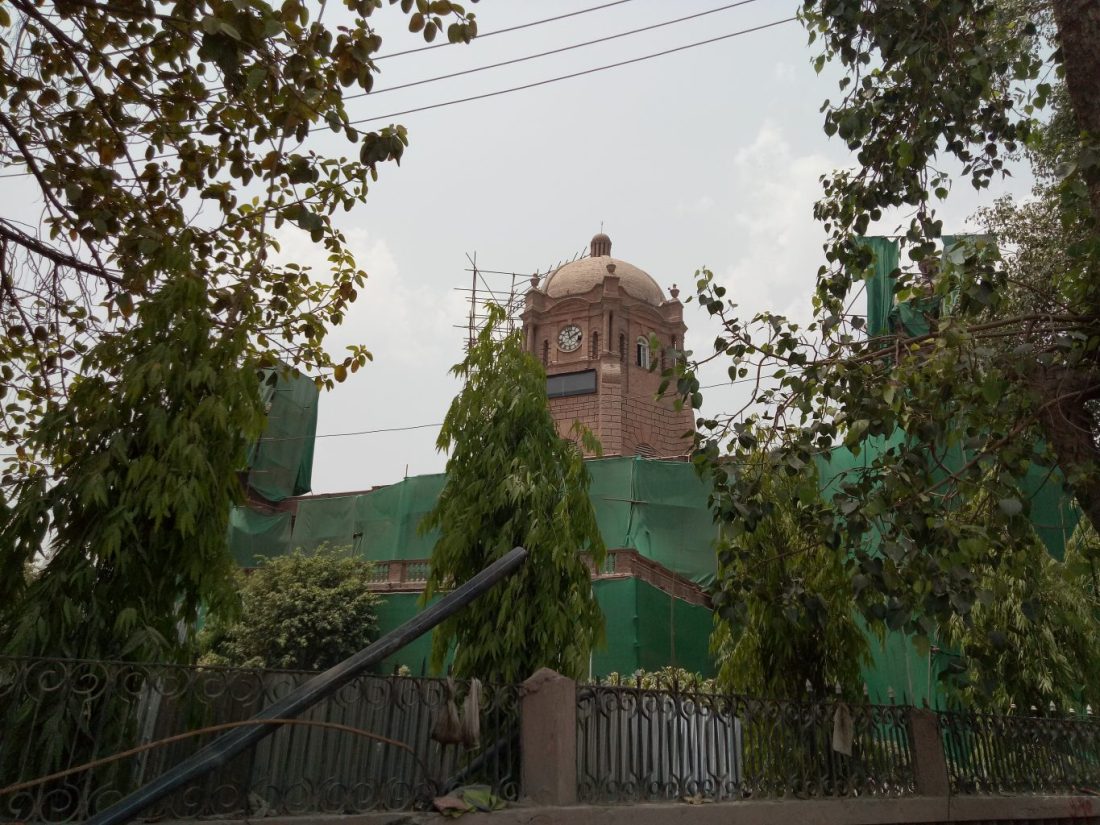 In the past, I had noticed this gallant building at an acute angle from Mcleod Road and the Mall. I had previously resorted to TCS for all my courier needs, so this was new territory for me.

GPO Lahore served as the spine of all communication in Lahore during Imperial times. Designed and built by Sir Ganga Ram in 1887 to honor Queen Victoria’s Golden Jubilee, the building comprises of two main halls, more than dozen offices, and two minarets, of which one is constructed in the European high-dome style. To this day, it retains its brick red elegance and loses no sleep as times change.

After posting my letter, I visited the Chief Postmaster’s office. She was, to my surprise, a young woman. I would be lying if I said I hadn’t expected a rickety old man. She allowed me to walk around the building, observe the establishment, and take pictures. I toured the verandas on both floors for a while and visited the two main halls. 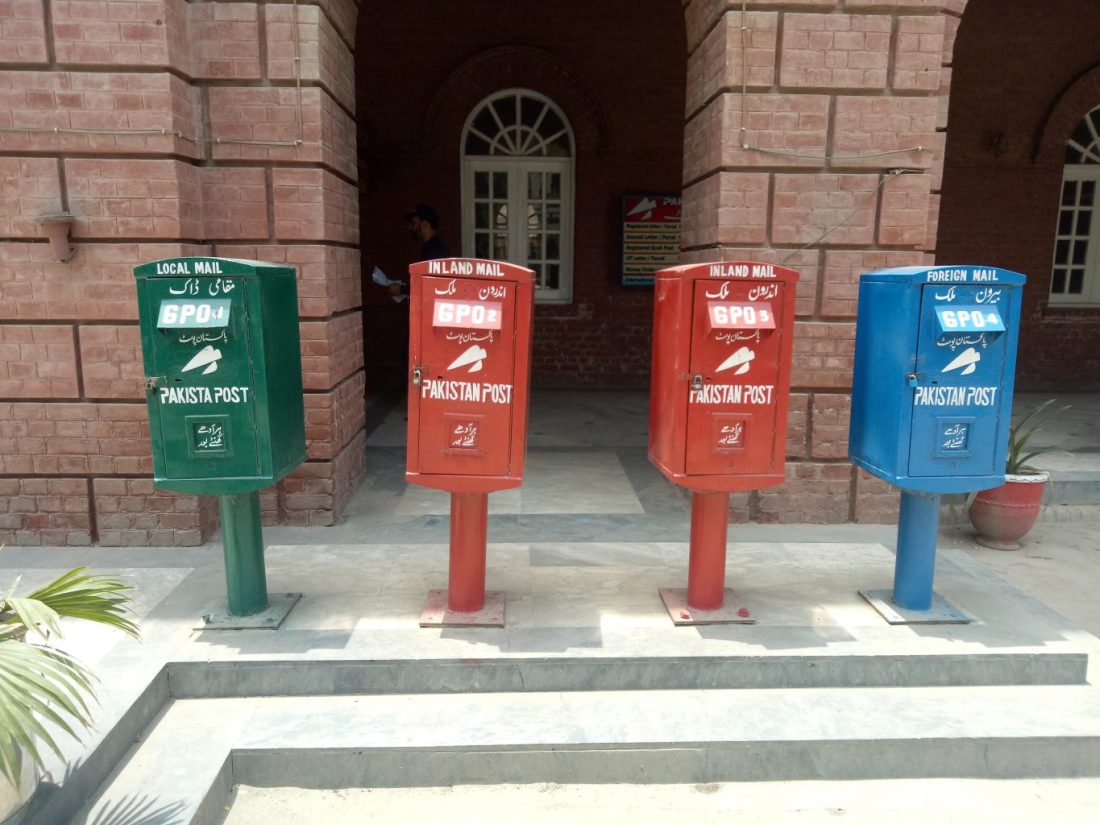 The wooden stairs and whitewashed doors of an era ago alluded to another time; I have witnessed a similar aesthetic sensibility in other colonial buildings. The hall on the ground floor had two portions, in which two almost-rectangular wooden structures sprawled. Officials sat on chairs, behind the glass-lined wooden structure, while customers stood outside of it.

GPO Lahore is the only window for physical communication across cities and countries. Yet, it is barely known today. An official told me that there were still a few odd people who sent letters for unofficial purposes. When the majority of people are equipped with social media, why resort to traditional forms of communication anyway? However, it is undeniable that letter writing was not just a method of communication but a ceremony and art. While I wrote my letter, I could not resist marveling at my unintended erasures, crooked words, and jumbled thoughts. 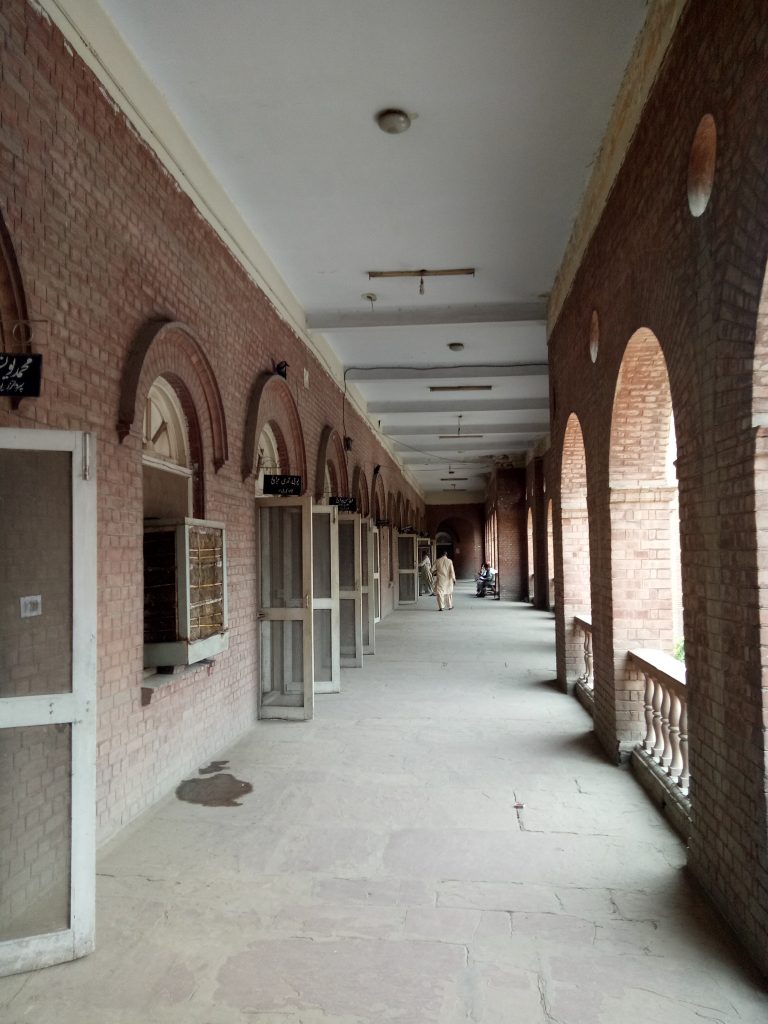 The building and its dome were being renovated. Scaffolding and blue gauze made cameo appearances here and there. A female security guard interrupted my photography, citing rules of decorum. I informed her that I had requested and been granted permission. Take that.

I returned, high on a growing sense of knowledge and rented authority.