Located on the third floor of Emporium Mall, Fun Factory is a relatively new amusement park that has people of all ages going crazy. The exterior was painted with bright and vibrant colors, so I had always assumed that it was a place for kids and not for teens or adults. Well, I guess you really shouldn’t judge a book by its cover. Unlike other amusement parks, Fun Factory offers much more than spinning tea cups and park trains. 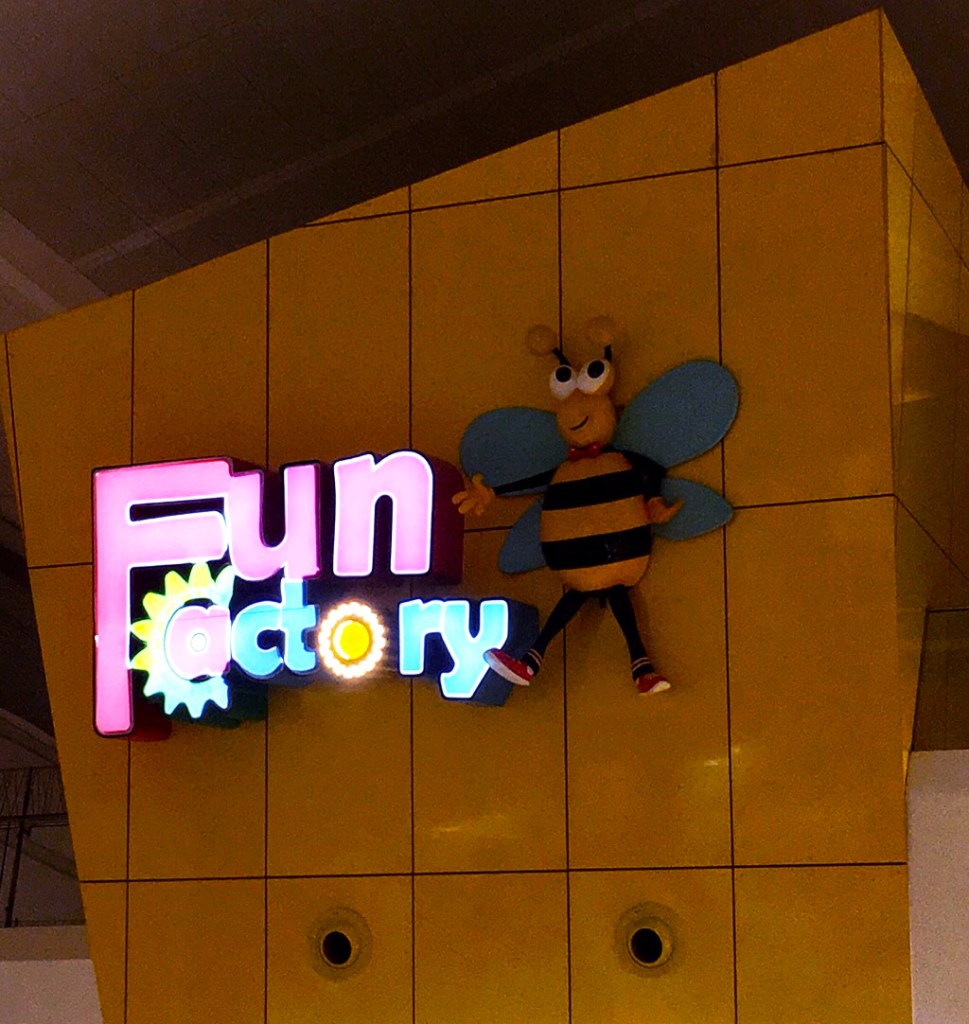 I had been wanting to visit it ever since I heard about their ‘grown up’ section known as ‘Dark City’. I stepped on to  the escalator that led towards the entrance. It was decorated with little bee stickers. A statue of their mascot, which is a bee, stood at the bottom of the escalator in an inviting posture. I got to the ticket booth which was decorated with large red and blue plastic flowers. I decided to play it safe and go with the lowest fun card that was available for purchase.

The entrance to the park was through a gigantic blue flower with creepy-looking eyes. Right after entering, a huge blue snake with green spots caught my eye. It was coiled around a darker green wall. Right next to the snake was a mini Merry-go-round. I looked around and was impressed by how well it had been decorated. The rides were vibrant, and beautifully painted castles and strawberries filled the walls with color and energy. Moving forward I came across a trash can shaped like a goofy looking clown. 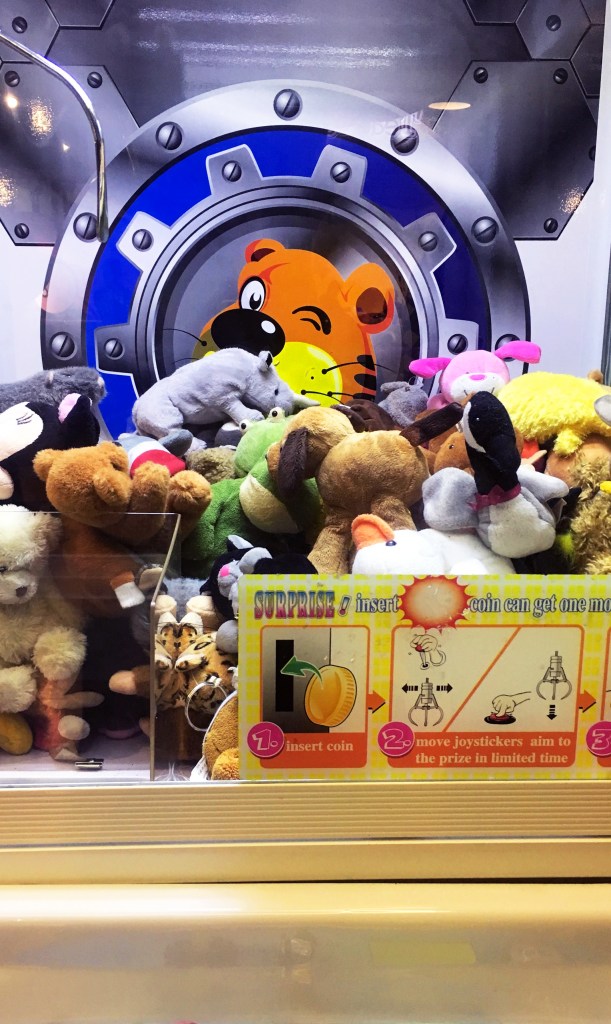 There were two different kinds of trains in this play area, one of which was circus themed. The other was made up of mini vintage cars that moved along the track. I ventured further into the ‘soft’ play area and realized that I wouldn’t be able to enjoy any of the rides here, as all of the rides were catered specifically for children. Understandable. The only thing that I could enjoy was the claw machine, and I managed to pull a stuffed puppy. I was happy. 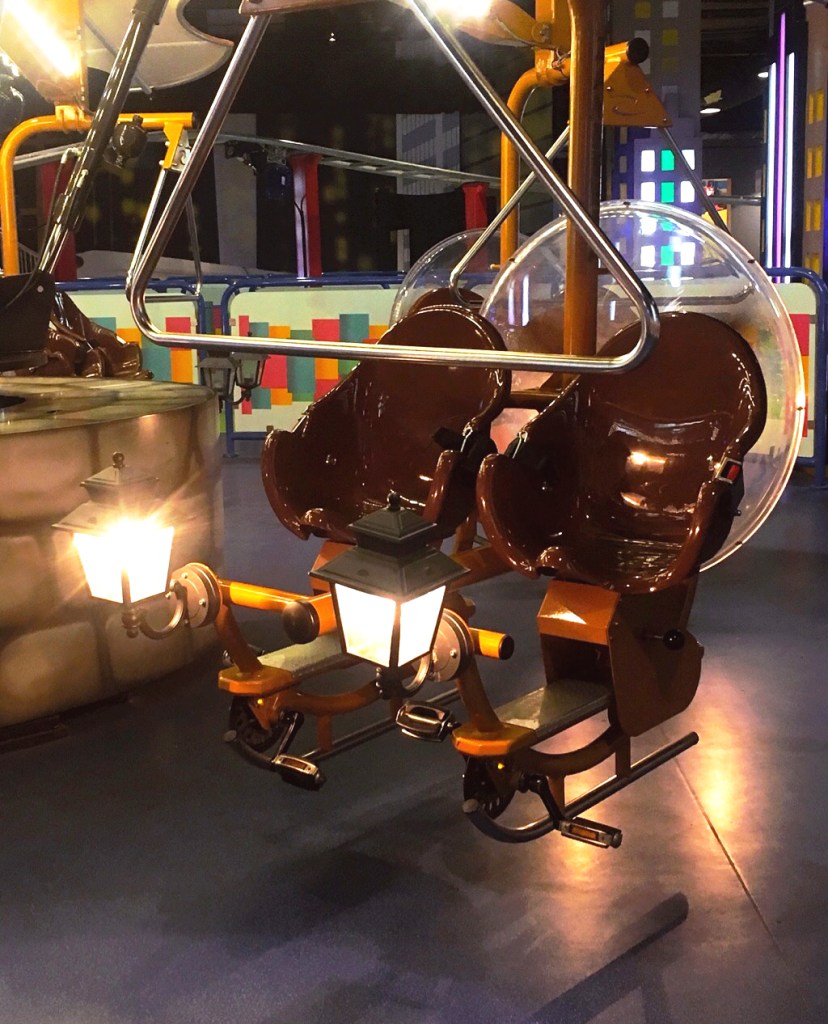 Towards the back of the area is ‘Dark City’, a play area designed for grown ups. It had a few rides that I hadn’t come across before. The most interesting one out of these was Gyrospin. It could hold up to four people and could rotate 360 degrees. Then there was the Skyline Impactor, which is a lot like the Insanity Ride from Stratosphere in Las Vegas, except a lot closer to the ground. Dodge ’Em cars were placed in an extremely dark ring with dim lights flashing from above, slowly shifting colors, making it barely visible and even more thrilling.

One thing I noticed was that the playlist in ‘Dark City’ was drastically different from the ‘soft’ play area. It was a Rock music compilation, consisting of songs like “Sweet Child O’ Mine” by Guns N’ Roses and “Carry on Wayward Son” by Kansas. I thought that this was a cool touch.

In conclusion, Fun Factory is an immersive and enjoyable experience for people of all ages.