Frere Hall is not an unfamiliar place for me. I have frequented it often, for historical events like the Aurat March, for intense philosophical discussions with my professor on Sunday evenings or just for random visits with my friends.

The History behind Frere Hall

Frere Hall was intended to serve as Karachi’s town hall and was designed by Henry Saint Clair Wilkins in 1865. After partition, the hall’s library was renamed as Liaquat National Library and the hall’s ceilings were decorated by the world-renowned Pakistani artist Sadequain in the 1980s. Frere Hall continues to stand tall today, with public festivals like Karachi Eat being organized there. Moreover, academics also use it for organizing study circles like the WDF Study circle. It is also one of the main tourist attractions for outsiders as it is one of the most iconic buildings in Karachi and its strategic location (it is surrounded by hotels, restaurants, and embassies) make it a prominent landmark.

More Than a Community Center

There are multiple things about Frere Hall which makes it my favorite building. For one, unlike The Grid and T2F, Frere Hall is actually in a working class area like Saddar-making it a very accessible place for people of all classes. While places like T2F and the Grid are also community spaces featuring galleries and book collections to promote the pursuit of intellectual and artistic interests since they are ensconced in the bubble of Defence and Clifton-it would not be wrong to call them inaccessible for the masses. Secondly, Frere Hall’s unique Venetian-Gothic architecture combined with Sadequain ’s mesmerizing art makes it one of the best public places to visit in Karachi.

The most prominent feature of Frere Hall is its long octagonal tower made out of yellow sandstone( like the rest of the building) – a reminder of the days of the British Raj. The entrance of Frere hall features an enormous garden with huge blossoming trees guaranteed for providing shade and comfort to anyone who ventures in- even on the hottest days of Karachi. Although not crowded, I noticed a lot of people in my vicinity. Homeless men sleeping comfortably under the loyal shade of Frere’s trees, children playing cricket in the garden and a couple of young adults shooting a video in the gallery’s entrance. Not surprisingly though, we were the only women there- a reminder of how public spaces need to be reclaimed by women.

As we walked around to find the entrance, the sight of the wooden arched doors behind the gallery’s entrance was tragic – with cobwebs, dust and grime gathering at the corners- clear evidence of the buildings neglect by the local authorities. We conversed about how Frere might be better off if it was adopted by an NGO only to remember how it might stop sheltering the homeless if that happens.

The entrance to the Sadequain gallery leads to a Gothic two-way staircase made out of white stone surrounded by pointed wooden arches. The presence of the Venetian-style arched windows provided wholesome light as well as a picturesque view of the greenery outside, although failing to obliterate the Gothic and gloomy feeling inside the hall.  The staircase led to a cavernous hallway with rounded arches featuring several of Sadequain’s paintings and of course, his ceiling. Despite the fact that this was not my first visit, I did not fail to be mesmerized by the breathtaking ceiling featuring murals by Sadequain. Although incomplete and requiring a painful crane of the neck to view and admire it fully -the ceiling is truly a masterpiece. The border features Greek pantheons and Islamic calligraphy while the incomplete central portion revolves around the theme of  Ilm o Amal (Knowledge and Action) which is calligraphed over a brilliant blue background. After admiring Sadequain’s works, I walked outside to find stone carvings featuring Faiz, Manto, and Sadequain paying tribute to their struggle against the state and society. 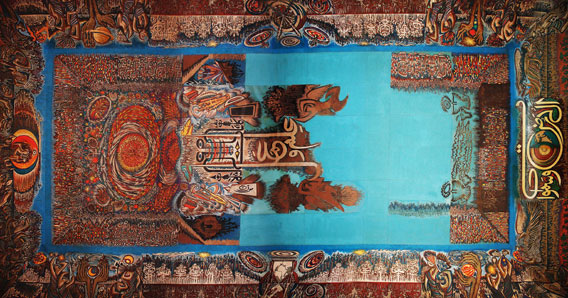 We ambled towards the famous library boasting a collection of 70,000 books. The library was enormous but when the eager bookworm in me decided to smell the old book at the nearest shelf – I ended up coughing because of the dusty vapor released by the volumes. The books were barely organized and I found everything ranging from Stella’s cookbook to Zoology in the literature shelf. Most of the books were dusty old archives of Reader’s Digest or Pakistan’s law and so on. The only relatively new book I could find was a chick flick by Cecilia Ahern. After scrutinizing the library for around 20 minutes-the only worthy books we came across was a collection by Christina Rosetti and a History of English theatre. I am pretty sure the library houses an astounding collection of books but the fact that the first floor was out-of-bounds and that all the remaining books were lying in piles of dust without being categorized properly was enough to exhaust and dismay even the most enthusiastic of bookworms.

We walked outside disappointed by the library and lamenting over the lack of maintenance of this architectural gem by the authorities while I listed the decay of Frere Hall as one of the incentives for the why-I-should-be-a-millionaire list in my head.

Tags:
A Page out of History, Arts and Festivals, For the Squad, Instaworthy, Literature Freaks, Local Legends
Share:
previous article next article