The title of this review is a lie. I have been to Novu a grand total of three times, and boy oh boy, are you guys in for an indecisive rant. If you don’t like reading my unnecessarily long reviews and need just one word to describe Novu, I’ll give it to you: Forgettable.

I probably sound like a broken record at this point but imma make sure you listen anyway. Pan Asian cuisine in Lahore is like a cat on heat. And much like a cat on heat, you never know where Pan Asian cuisine is headed. One thing’s for sure, you’ll eventually find it mingling with the trash. Despite its fancy shmancy name and its chic AF interior, Novu tries to fill a vacant commercial lot rather than a gap in the market. That’s… not a good look.

I was invited to the opening by someone who knew one of the five partners behind the newly established restaurant in the new park-side nook in Y Block, Phase III, DHA. I wish I had glanced at the menu before going to get a sense of what to expect. Ultimately, this didn’t factor into my first visit because I didn’t get the chance to try anything there. At a tasting that was supposed to run from 6 PM – 9 PM, I arrived at 7:30 PM. If your watches are set to Lahore Standard Time, this is fashionably punctual. To my surprise (yes, things still surprise me), the ‘red carpet’ had not been rolled out yet, the media wall was incomplete, and there was absolutely no one there. For a hot sec, I thought I had screwed up when I scheduled it in my calendar. But a dapper gentleman near the door told me I was at the right place at the right time. Great first impression.

The windows facing the front of the restaurant (also the only windows) were comically frosted, with stickers of buzzwords pertaining to the cuisine in question plastered on them rather cheaply. Sushi. Pan Asian. Pad Thai. It looked more like a takeout window than a dine in establishment, with no frills attached whatsoever. I entered on the ground floor, where I was immediately boxed in by an alleyway-like landing. Right ahead, a small podium with the bored maître d’hôtel propped up on a stool acted as a welcome. On the left, the ‘open kitchen’ with enough room for two chefs to work together gave me a fright. Working in this kitchen must be tough, especially because the storage space is a floor above. Imagine the hustle. 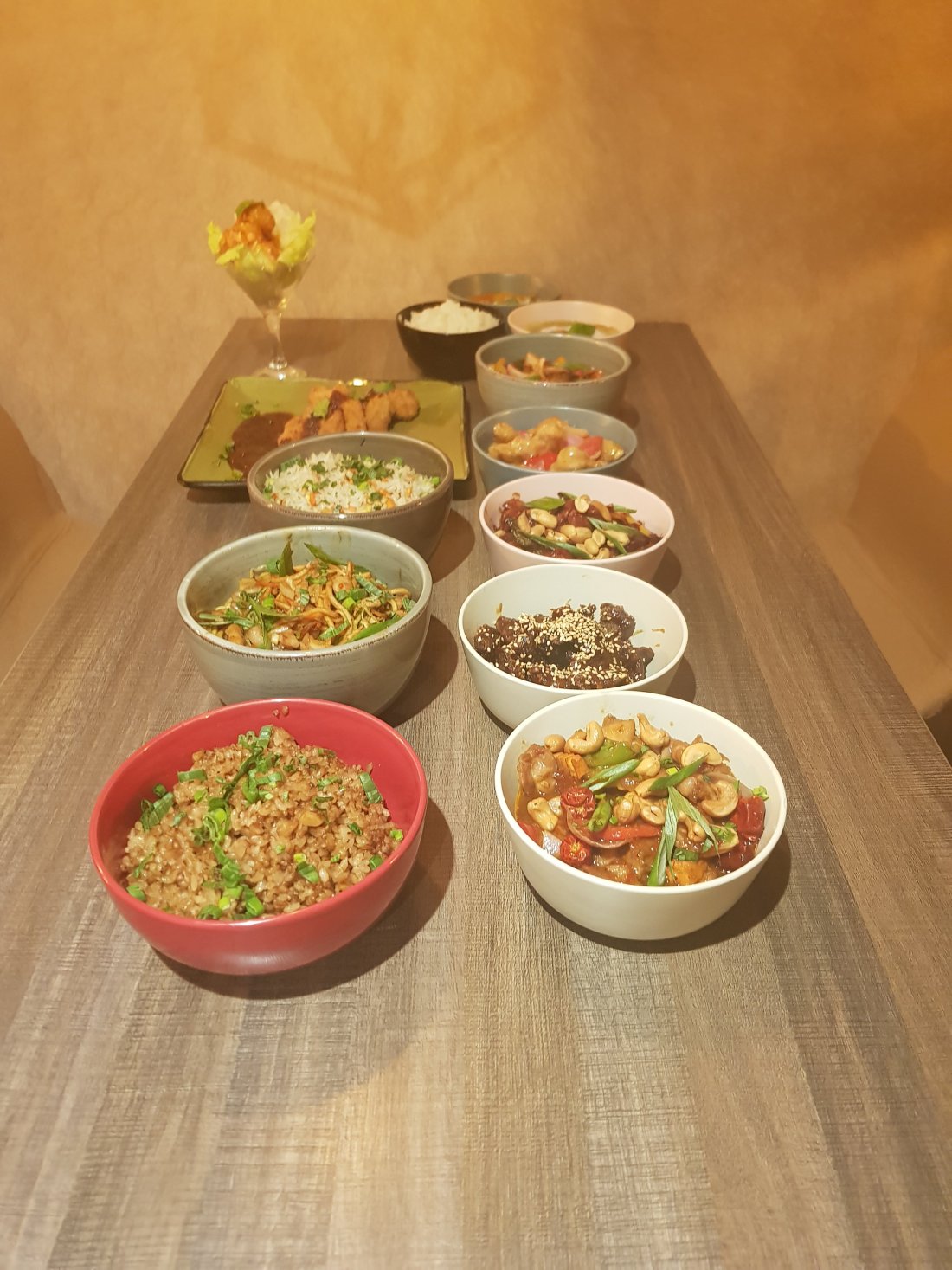 The full spread at the launch.

A narrow set of steps took me up to the main event. This is where I was to be wowed. We managed to get some good shots of the minimal interior with sleek leather chairs and wooden beams consistently breaking the monotony. Glamorous, I thought. And it was. Though the restaurant can seat 24 at capacity (all on the first floor), it did not seem the sort that would get too ‘cozy’ if it did, in fact, reach capacity. Three visits in, I am still to see it operating at capacity. Unfortunately (or fortunately), I have shattered my own expectations by vowing to opt for better and simpler takes at Pan Asian cuisine. But before you think I’m jumping the gun too quickly, let me introduce you to the items on the menu. 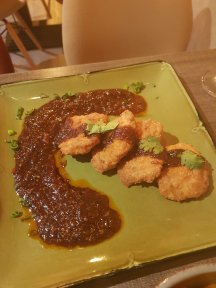 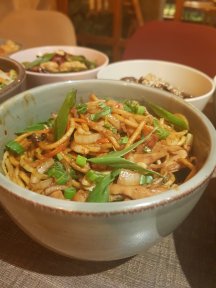 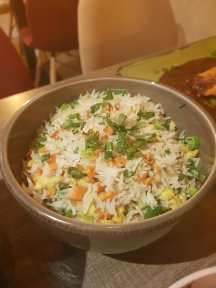 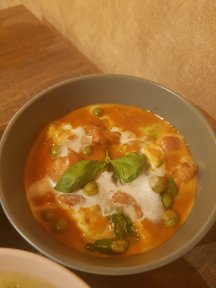 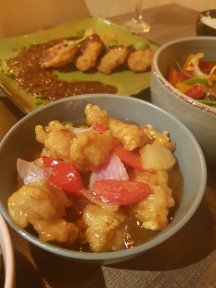 In classic I-don’t-care-I-just-want-to-be-an-echo-chamber style, Novu brings nothing new to the table. I’m talking nada. Zero. Zilch. When I saw the menu on my second visit here, I almost cried. No, I almost fought someone. Actually, I sat there and took it like a champ. The menu seemed like a hybrid of Rice Bowl, Bamboo Union, and Gaia offerings. Tom Yung Goong and Hot & Sour soups, Honey Glazed Wings and Tempura Prawns for apps, and Crunchy Honey Beef, Tamarind Fish, and Pad Thai for mains. No desserts, ladies, and gentlemen. If you dozed off in the middle of this paragraph, I don’t blame you. So what did I try and how did I like it? I thought you’d never ask.

I am not a soupy guy, so I usually refrain from ordering soup. However, one of the partners of the restaurant insisted that I try the Hoko Noodle soup; I was not disappointed with this recommendation. I have never tried Hoko Noodle soup before and was not even sure it was a real thing. Spoiler alert: it’s not. This was, however, still undeniably delicious, and if there’s anything I would order from Novu time and time again it would be this soup. Enough praise. 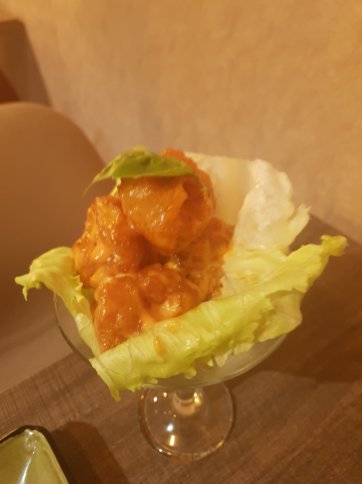 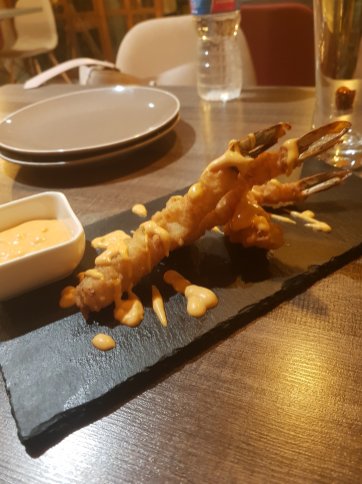 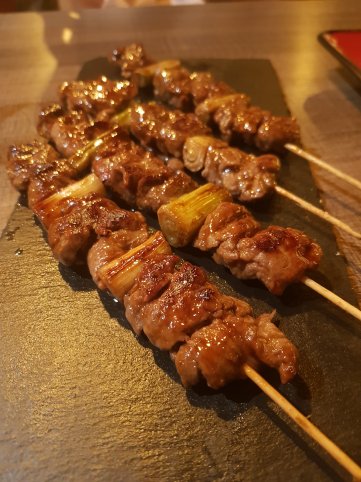 The Tempura Prawns were cereal-y. I did not like them one bit because I am used to Japanese variants that are much airier and smoother. This was heavy, and though the prawns were fresh, I had a tough time coming to terms with the dense crust. These are not the sort of tempura you wanna be dipping in soy sauce. Next up was the Beef Yakiniku (beef skewers). I absolutely adored these, because even untouchable spots like Sakura have been f*****g this up for years. The beef was tender, like the touch of a woman (not that I’d know), and the amount of marinade just made it hum tunes my belly loves. I would recommend that you try this out stat. Obviously, by now you know I was lying when I said “enough praise” in the previous paragraph. I do that sometimes.

The mains, then? (I’m getting bored so I’m going to up the pace) 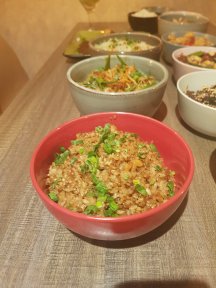 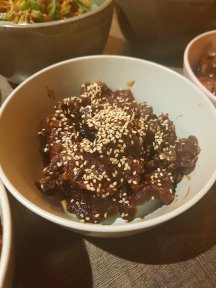 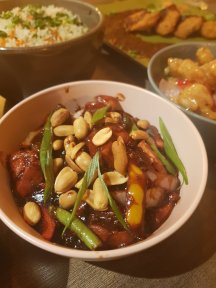 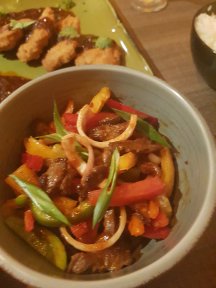 Rice/Noodles are served as complimentary supplements to all entrees. Now that we’ve exhausted all positives, this is where the bad begins. I could make better Chicken with Cashew Nuts in my own kitchen despite not knowing the recipe. Dry, far too dry, and sweet like sugarcane juice. Pass. The Novu Special Beef has three chilies next to it on the menu. This is the highest spice level on the menu. The beef was sweet. Yes. Sweet. Next. The Beef Chili Dry was ok. Just ok. I would prefer YUM’s beef over Novu’s beef mains any day, and YUM’s beef ain’t all that special. I thought the Thai Garlic Prawns would be gravy-based, but my misconception is a personality trait rather than an oversight on the part of Novu. Anyway, they still weren’t decent because I found the prawns tough and hard, devoid of flavor past the outermost layer of onion and garlic drizzle. Nope. The Pad Thai was atrocious. I had a tough time swallowing the first bite. It was rancid if I’m being absolutely honest.

I was so happy with the main course! Mostly happy that there was no dessert to suffer through, but I was happy nonetheless. I bounced ASAP.

Novu should look into opening a meat shop because they’ve already butchered most of the items on the menu by Pakistanizing them. Smell ya later.

Update: Novu has also opened a branch in Gulberg III near Hussain Chowk.