So the first time that I set on the voyage to visit Fakir Khana, I ended up getting lost in the narrow streets of old Lahore. My Terios kid narrowly avoided budging into motorcycles and QINGQI rickshaws. My sister occupied the passenger seat and was possibly the worst companion I could have picked for this trip. She has severe claustrophobia which the pathway, leading to Fakir Khana, stirred up. Her incessant whining about suffocation and feeling trapped in the narrow lanes was getting on my nerves.

Between her tantrum and my car’s measly 5 KM/hr average speed, I managed to squeeze in some meditation; I wondered about life in Old Lahore. People carried out their daily chores in these dusty muddy streets, buying the cheapest fruits and vegetables, khula doodh and open mithai. I saw men with kohl in their eyes, oil in their hair and miswaak ( teeth cleaning twig) between their teeth. Dhotis (unstitched cloth used to by men to cover their lower bodies) were the unanimous fashion statement; the smoking of cigarettes and staring into space was plenty. A simple way of life not mired with modern complications and extraordinary ideals.

For a moment, I felt the suffocation too but it was of a logistical kind: I was worried that I’d never find my way out of these maze-like streets. The fact that literally only one car – that too of a small size – could pass through the pathways, was a bit of a headache. Alas, the streets belonged to the people, not to my Terios Kid.

And my complaining was misplaced: unlike other hidden places in Old Lahore, Fakir Khana Museum is rather easy to find. Google maps and an efficient driver (ahem) is all you need to enter Bhaati Gate and stop outside the magical place.

The ancestral haveli of the Faqir Family, Faqir Khana Museum, is the largest privately owned collection in South Asia. The artifacts are curated with love and displayed with pride. Zeenat ventures to Bhaati Gate to see these treasures with her own eyes. 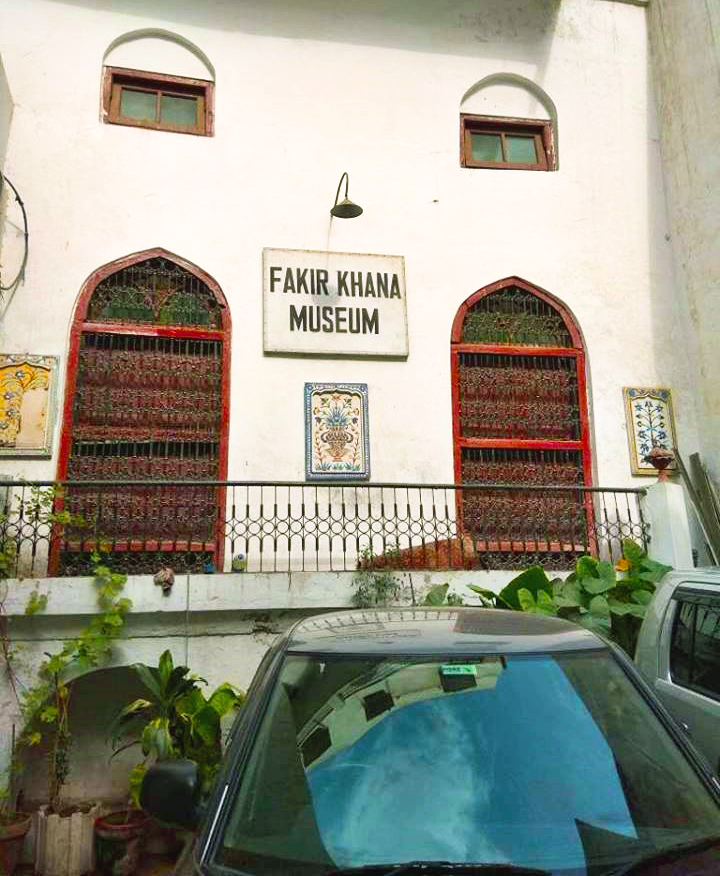 A beautiful haveli has been turned into Fakir Khana Museum, an abode for historical treasures. As South Asia’s largest privately owned museum, it houses uncountable antiques that have been transferred over generations. We entered the main hall of the haveli to be greeted by Sir Faqir, the curator of the museum. An old man, his whitish grey hair was tied into an attractive ponytail. He had been waiting for us – we were late for our appointment (shocker).

The hall acted as a waiting area, a drawing room, and his office. Yet, it did not fail to give a small reflection of the grandeur that was awaiting us upstairs. The entire room was adorned with all sorts of historical pieces, ranging from swords and shields to carpets from the Mughal era. The most interesting carpet, as Sir Faqir explained to us, was one from Shah Jehan’s era – ‘The General’s Carpet’. A mixture of light-dark shades of brown, it was a subtle amalgamation of multiple features. He placed his finger in the center of the carpet to trace out the throne of the king on the corner of his mustache. Then, from the same point, he drew the chin of a bull, leading up to its horns on either corner of the carpet and creating the bull’s face. 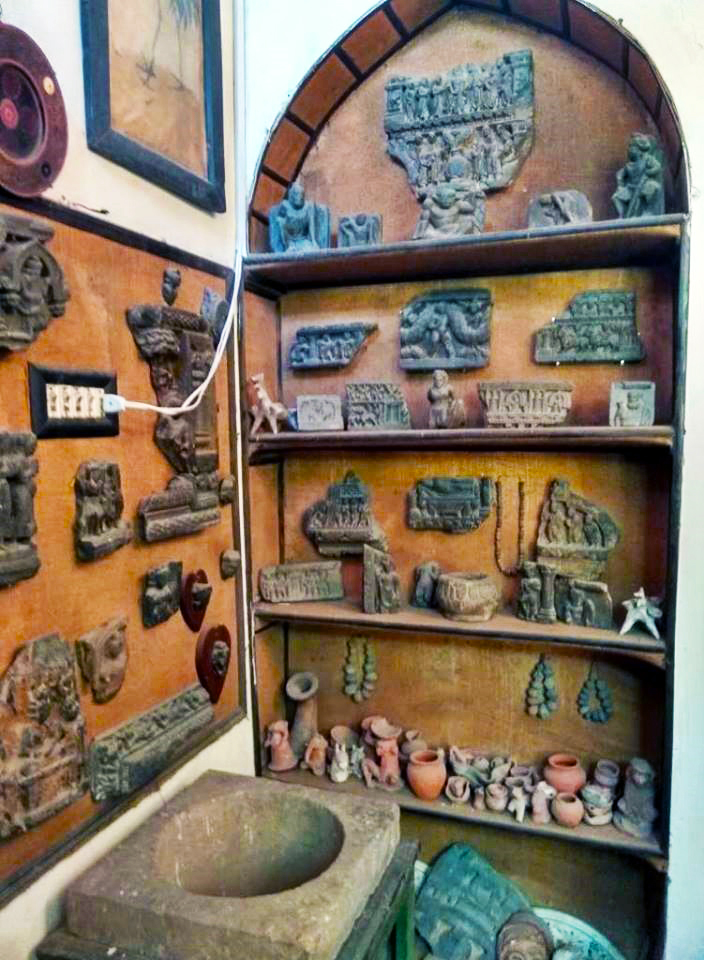 After absorbing the brilliance of these intricacies for a little while, we were grouped together with some other guests. Fakir Sahab then asked the guide to lead us to the Fakir Khana museum.

Upon reaching the second floor of the haveli, we were asked to remove our shoes before entering the main room. We stepped inside and now walked on hundreds of years’ old carpets and rugs. Despite their apparent weariness, the dense floral patterns and geometric designs had not lost their attraction. In fact, they were still able to induce appreciation from those who walked over them (or perhaps just me). 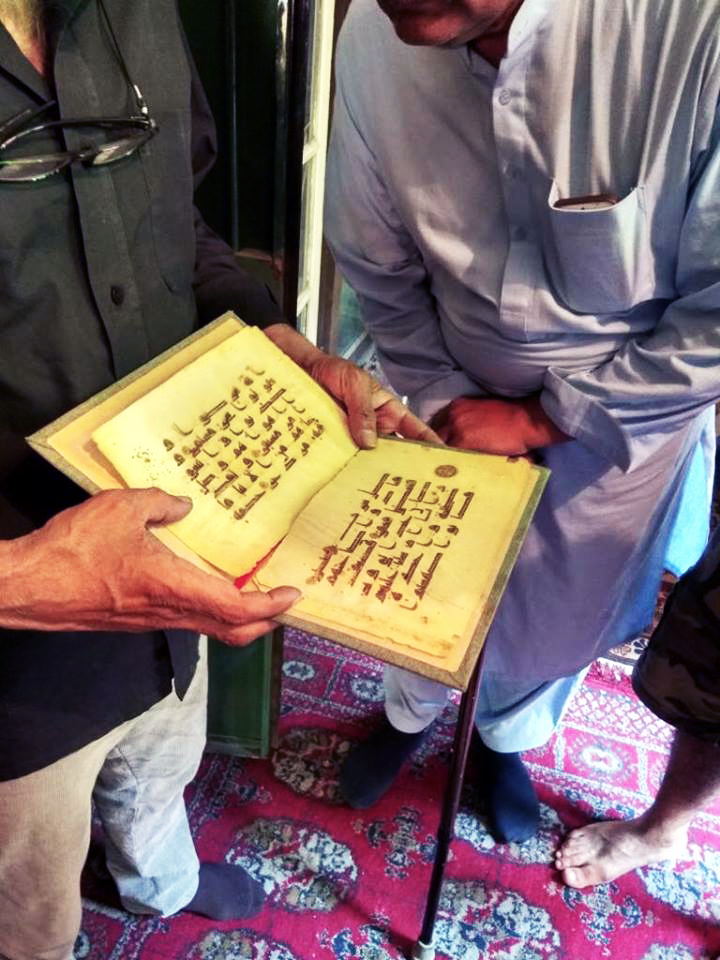 We were handed some magnifying glasses. Things were getting serious. The whole room was decorated with centuries-old antiques. Every nook and corner spoke of the precious history that was engraved within the frames and the decoration pieces.

We were first introduced to the world of miniature paintings: a conventional style of art that is extremely detailed and intricate. While the art is most popularly known to trace back to the Egyptian era, many believe that is also influenced by the medals of ancient Rome. We were told that a miniature is often assumed to be small or tiny. However, that is not the case. The word ‘miniature’ has nothing to do with the painting’s size. In fact, it refers to the technique and style that has been employed in that painting. Thus, even a wall-sized art could be referred to as a miniature, on account of its complex, yet smooth technique.

The first painting that we came across, was a depiction of Krishan Kanhaiya’s two mothers.  Lord Krishna’s foster mother, Yashoda Maiya is seen handing Krishna over to his real mother, Devki. In the second part of the painting, Devki is handing the baby over to his father, Vasu Deva. This 15th-century miniature painting is considered the ultimate depiction of love and pain. The love that had been developed between the child and his foster mother and the eventual pain that the latter felt when she had to let go of this child are presented in this painting. This was the oldest miniature painting that the museum possessed. 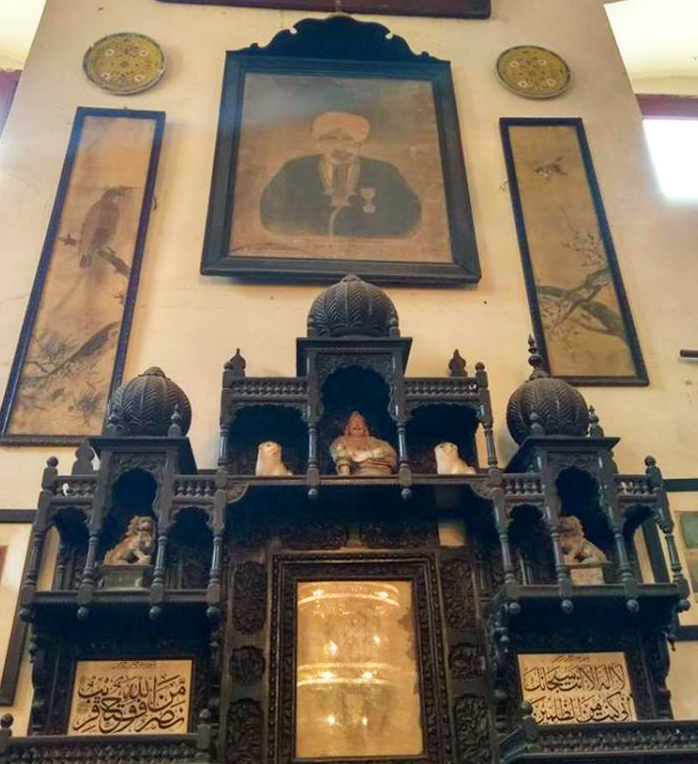 Our second interaction was with a portrait – one of the four types of miniature paintings. It was the portrait of Nawab Mumtaz Ali, made from the strokes of a single hair brush. I zoomed in, with the help of the magnifying glass, to closely assess the ivory paint. The entire sketch was an illustration of extreme struggle and technique that would have gone into making it. Ghulam Ali, a Mughal era painter, had taken 15 years to create this masterpiece. Be it the few strands of hair resting on the Nawab’s forehead, the upside-down flowers on his coat, the wrinkles of cloth or the grey hair in his overgrown beard – Ghulam Ali had painted each element with the utmost focus and intricacy. Although the Fakir Khana Museum claims that this is the best miniature piece that they have, I was not convinced.

Jalaludin Akbar, the third Mughal emperor had famously tied the knot with the Rajput princess, Jodha Bai. Numerous movies and Indian shows have portrayed their love-story along with Akbar’s impressive characteristics. Although Jodha and Akbar’s romance still continues to melt hearts, many are still not aware of Akbar’s controversial personality. It is widely believed that Jodha was the only wife Akbar had wished for. Yet, little is known about his desire to marry a European woman. And so, within the ivory section of the Fakir Khana Museum, hung a revelation that would change the entire narrative that people had come to believe over the years. Below the ivory painting of Jahangir, Akbar and Mumtaz Mahal, hung a small portrait of Mariam Zamani Begum – Akbar’s European wife. Her original name was Mary. Maryam Zamani is mistakenly considered to be the other name of Jodha Bai, and the mosque in Lahore is thought to be hers. The guide told us that this picture is the only evidence of Mary’s existence.

For another hour or so, our group was introduced to incredible pieces from the Mughal era and beyond. Be it the Iranian King, Kachaar’s portrait, whose eyes would follow you everywhere in the room, or the piece of glass with Surah Yaseen (a chapter in the Holy Quran) intricately-scripted with Surah Yaseen in the tiniest font – each succeeded in creating a sense of wonder in us.

The other section of the museum was equally spell-binding. We were shown the most delicate porcelain crockery, Gandhara art, Buddhist pieces, Tibetan paintings and relics from the Ottoman empire. Protected closely in a glass compartment was a King’s jacket from the Ottoman empire that needed repair. The guide told us that an organization in Turkey had been asking the museum to rent them the jacket for the past fifteen years, but Sir Fakir kept refusing. I wondered how many such pieces of art would they have already lent to museums around the world. 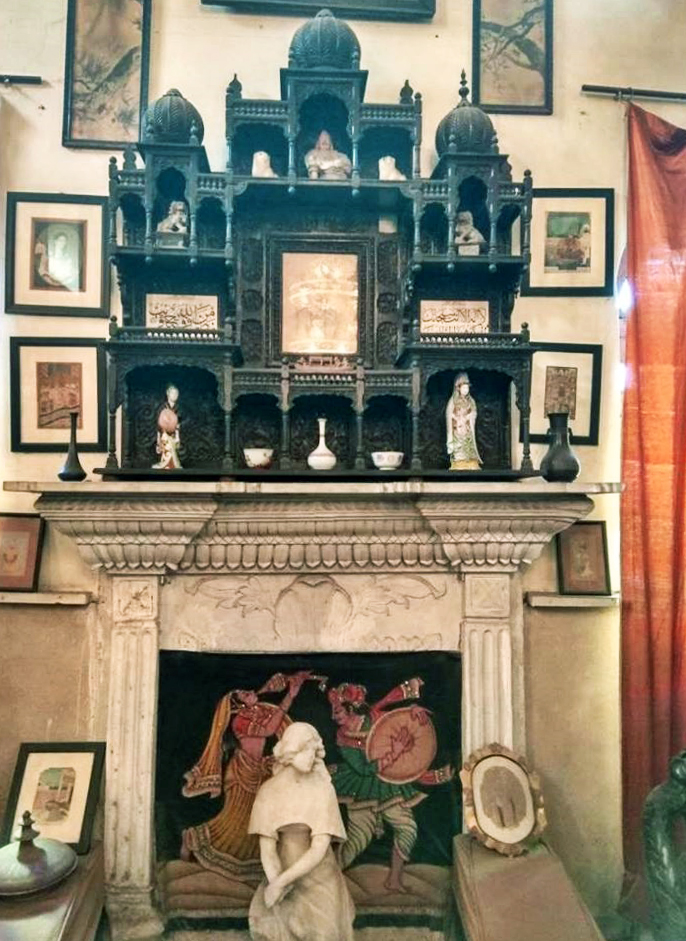 This tour was like a trip to ancient times. It was detailed and scripted: as though I was walking through the pages of history. The descriptive way in which this information was being imparted to us was impressive but I felt as if we had not been given a chance to explore. After my post-visit research on the museum, I was rather disappointed to find out that we had come across more or less the same art that visitors before us had seen. The museum had specified the types and number of artifacts that were open to the public. Sad.

I wondered why. Was it because they did not have enough material to showcase? Was it because the rest of the artifacts are so delicate and important that they would rather not risk showing it to the public? Or was it because most of it had been rented out to generate revenue? I couldn’t tell unless I had a conversation with the guide.

Towards the end of our tour, we came back in the main hall downstairs. I asked the guide if the government gave any financial support to the museum for its preservation. With great disappointment, he informed me that the government does not provide them with any help – not even enough to pay bills for the museum. Their only mode of survival was through the donations that they got. I couldn’t believe his answer. I felt a sense of responsibility and immediately made a donation. Fakir Khana’s collection is a thorough insight into the subcontinent’s history, its indigenous lifestyle and the influence of surrounding cultures on its art and tradition.