Doughlicious: Rise of the Doughnut Cones

I was seven when I tried an ice cream float for the first time, as a kitchen experiment. The first brain freeze got me good. On an existential level, I’m sure this was one of the first times I realized that reality couldn’t, and shouldn’t, be boxed up in the confines of social expectations. These ice cream floats make you think, man.

A little less than two decades later, this disdain for prejudice has infiltrated most areas of my life. Mostly, it’s made me go ga-ga when conventional snacks are fused into something new. I mean, there’s a reason I kicked off Weird Wednesdays. Understandably, the arrival of doughnut cones in Lahore earlier this year made me flip out. Love doughnuts. Love soft-serve. And previous ice cream float experiences tell me this is going to be a good one. 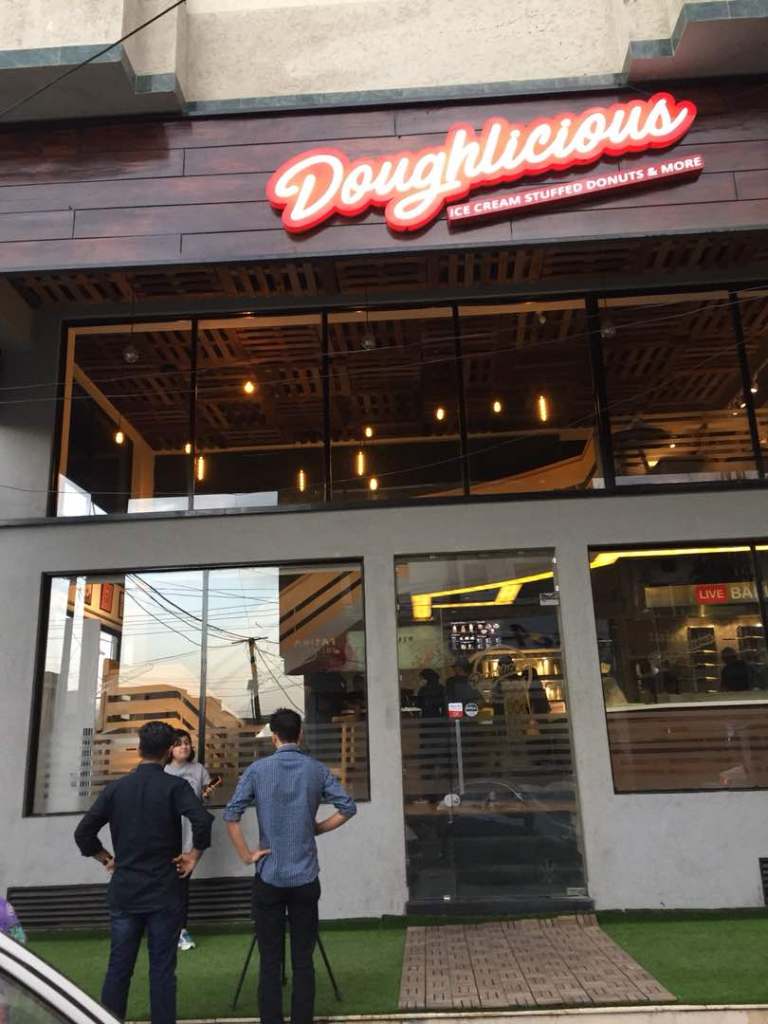 So I head on over to Doughlicious’ flagship branch in T-Block, DHA. I am instantly sold by the calming vibe of the parlor. Large light bulbs with glowing filaments hang from the ceiling. They light up the space solemnly: subdued and not flashy, their light blends well with the not-as-well-lit spots. Brilliantly polished log-like wooden panels complement this lighting choice, as does the use of AstroTurf on the walls inside. It is a welcoming place, and why shouldn’t it be? Doughnuts are for everyone! 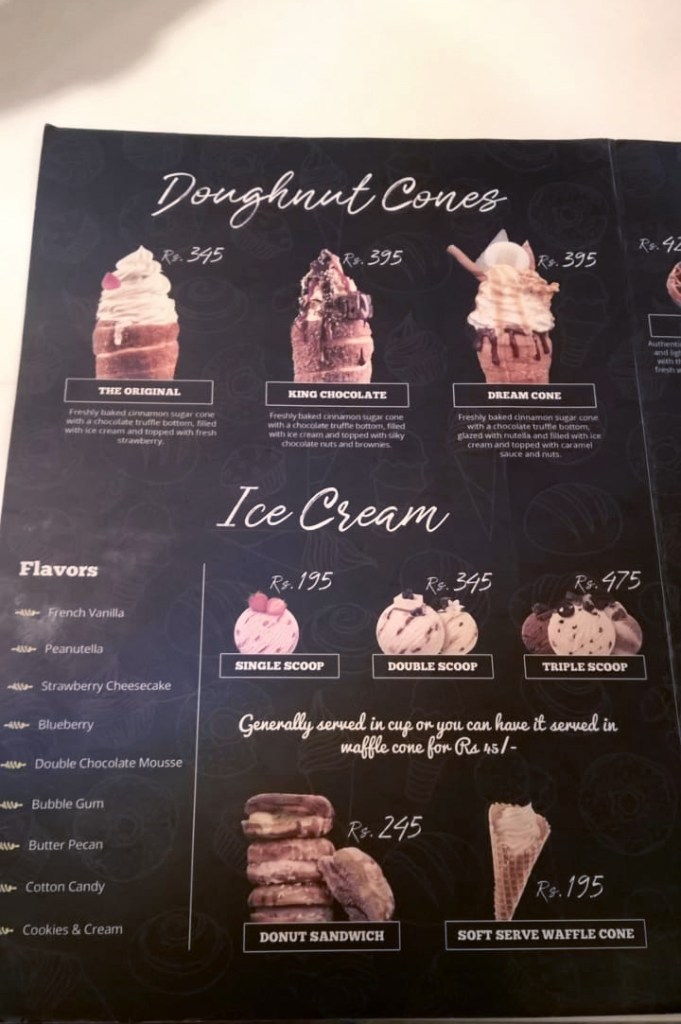 This is my first visit to Doughlicious, and yes, it is the first of many. I visit late in the evening, but I’m still the only person on the premises. A couple of people walk in and get an ice cream scoop for takeaway, but that’s about it. I almost always carry a book for ideal escapes such as these. This evening, I have Neil Gaiman’s creepy AF Coraline. Perfect.

But I can’t get to the book until I’ve placed my order. I can realistically order one thing, being human and all. But I’m hopelessly unrealistic, and I go for a Dream Cone and a Doughnut Ice Cream Sandwich. I’m told it will take about ten to fifteen minutes for my order to be ready. Excellent, I’m in no rush.

So I pick a table nestled by the staircase leading to the mezzanine floor and dive into my book. Other-Mother’s sewing kit and puppet-making skills become a bit too much for me though (read/watch Coraline, people), so I wander over to the live baking area and look at my cone-in-making. I’m ready for Douglicious’ desserts to spoil me. 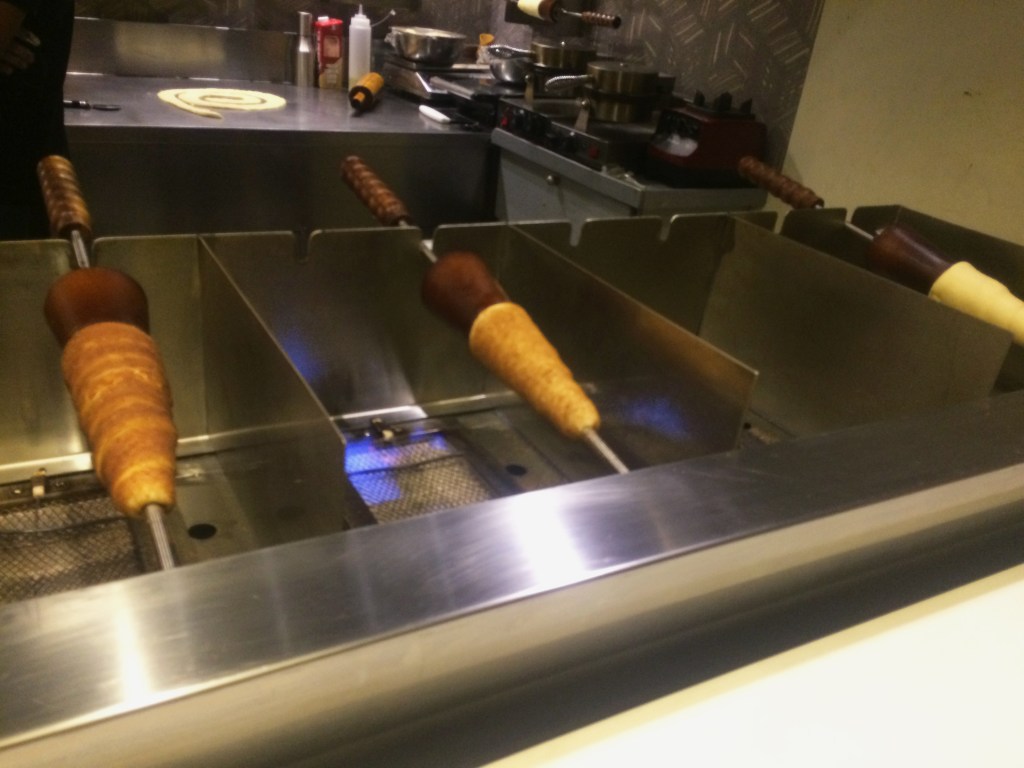 It smells as good as it looks. The aroma of fresh, sweetened dough is tempting and gives me a great deal of comfort. The cone is shaped around a silver mold – suspended and rotating slowly – much like shawarma, if it were cooked horizontally. It is a trance-inducing process, and I decide to make a video of it, for times when life seems frenzied.

A few minutes later, my doughnut sandwich is ready. A no-holes-given plain doughnut is divided in half and sandwiches a scoop of vanilla ice cream. I can tell it’s fresh because the ice cream has melted from the top and the bottom. I pick it up and take a bite; much like a sandwich. Woah. That’s a lot of ice cream. Next I break off a bit, without the ice cream and – let me tell you – fresh doughnuts are everything. They really are. If you’ve ever felt wholesome when smelling the unique aroma of new cooking oil in a clean wok, you’ll get it. If you haven’t, pay attention to it next time.

This sandwich lives up to the brand and relies heavily on the dough – yaaas. The ice cream itself is secondary, more of a complement to the main star. I pity the fools who bought a scoop earlier, as I dig into my sandwich. Maybe next time I’ll try the cookie dough. 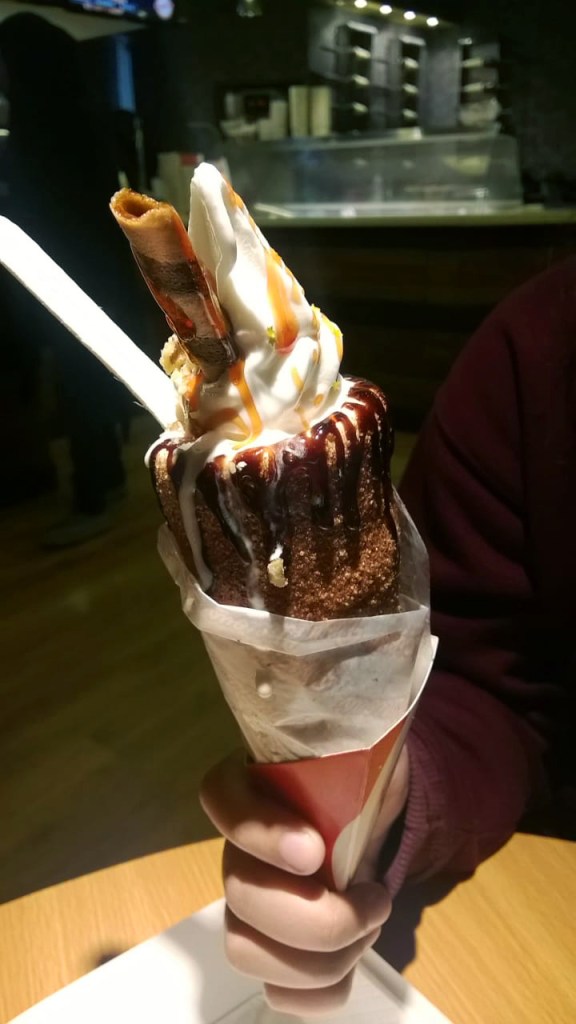 The food is heavy too— I’ve not been able to eat a quarter of it and now my Dream Cone is here. Okay, it’s actually my dream cone. Soft serve vanilla has been layered onto a cinnamon-iced doughnut cone. I can see chocolate peeking out underneath the ice cream and I am told that the doughnut it is layered with Nutella sauce inside. Deep breaths – don’t get excited, don’t scare it.

The cone is decorated with a chocolate wafer, and edible golden stars: ceee-ute! By now, I have an opinion on their ice cream: it isn’t overpowering. It’s perfect for kids, too. There’s just a hint of sweetness and, as for the rest, it relies on the cone, on the additional wafer, on the layer upon layer of glorious Nutella to do the heavy lifting. I like this humility and I like how different components are paired to make this the cone of my dreams. Eh, no biggie.

The bottom line is: you gotta try this one. It’s the prettiest dessert store on the street! Different from your apple pies a la mode and a change-of-pace from the Dunkin Donuts’ of the world. I’m a fan, and this stance hasn’t wavered yet.

UPDATE
As of June 2019, Doughlicious has added calzone style pizza cones, burgers, sandwiches and dessert tacos to their menu. As if we weren’t sold already!