Choong Pind: Where School is Cool

On the last Saturday in February 2018, I entered Choong Pind from a corner of Phase II in the Defence Housing Authority (DHA). Nawab, a woman who cleans houses in DHA, was to be my guide.

Nawab is a mother of six – the eldest of her children is seventeen years old – and claims she is thirty. I’d assumed she was in her early fifties, but I have to admit: she is much leaner than that.

Talia explores Choong Pind, a slum that is accessible through a bylane within DHA. The squalor stands in juxtaposition with one of the poshest housing societies within Lahore. Her experiential guide, through Choong Pind, provides a unique insight into the lives of the inhabitants of this locality. 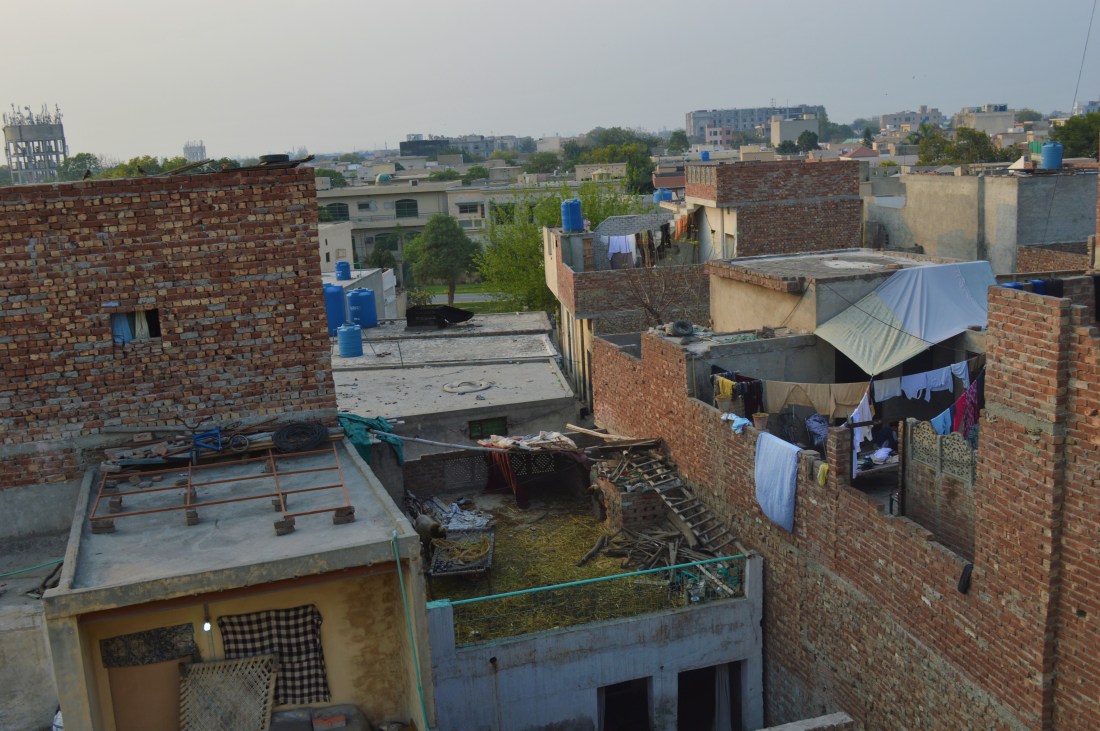 Choong Pind, like Nawab, is full of charming twists and turns that defy mathematical logic. Streets cut into streets. Houses are built on top of each other, like a layer cake. It is never predictable, and everything tumbles into something else. Places like Choong Pind are often identified as ‘authentically Pakistani / Indian’ in art and the international media (as opposed to Hafiz center or H block market in DHA, two other spots also not associated with affluence). Just like us, people outside Pakistan are charmed by the older ways, by what seems different rather than similar.

Upon entering, we find children of varying ages playing in the street. Everyone is curious; why do I have a camera? What am I doing there?

A few young men – all on one motorbike, as is the time-honored tradition of Lahore – cross me at the entrance. They say something I don’t catch. I raise my camera and take a picture. This is my go-to response when I feel uneasy in public , to make the other party uneasy instead. These young men, though, are only being friendly. Slowing down ruins their balance, and one of them falls off. There is a dignity to the way they tell me that they’re students at a local college. 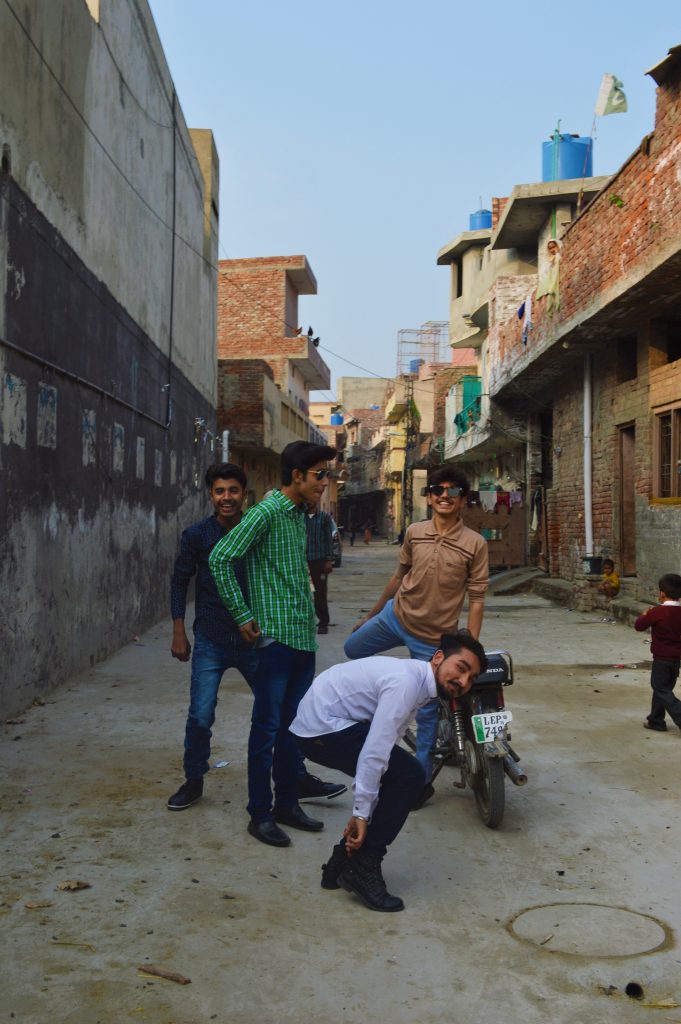 Caught in the act

A little further into the street, I see a man relaxing on a dilapidated green sofa. The sofa is placed outside a store that has two buffaloes tied to it. He seems amused when I ask him if he’s comfortable with having his picture taken. 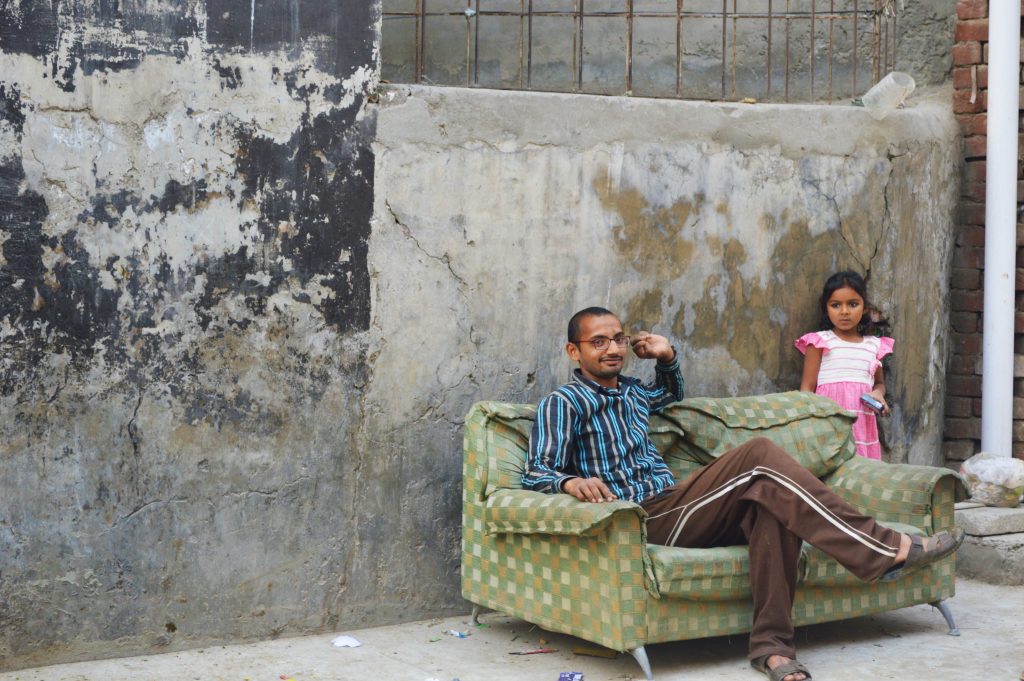 In retrospect, that sofa is the perfect example of Choong-Pind-ness. A fixture that is odd but also functional. No one questions its presence, even with the motorbikes and occasional cars going by.

I ask the man on the sofa what he does. Hesitantly, he tells me he’s a student. I ask around for the owner of the empty store behind the sofa and the children point to him. He smiles sheepishly. He’s not a student – he runs a corner-shop that supplies the usual: nimko (a mix of dried pulses and nuts), chips, soft drinks, cigarettes. He also works as a tailor and there is a small space next to the shop with a sewing machine on it. 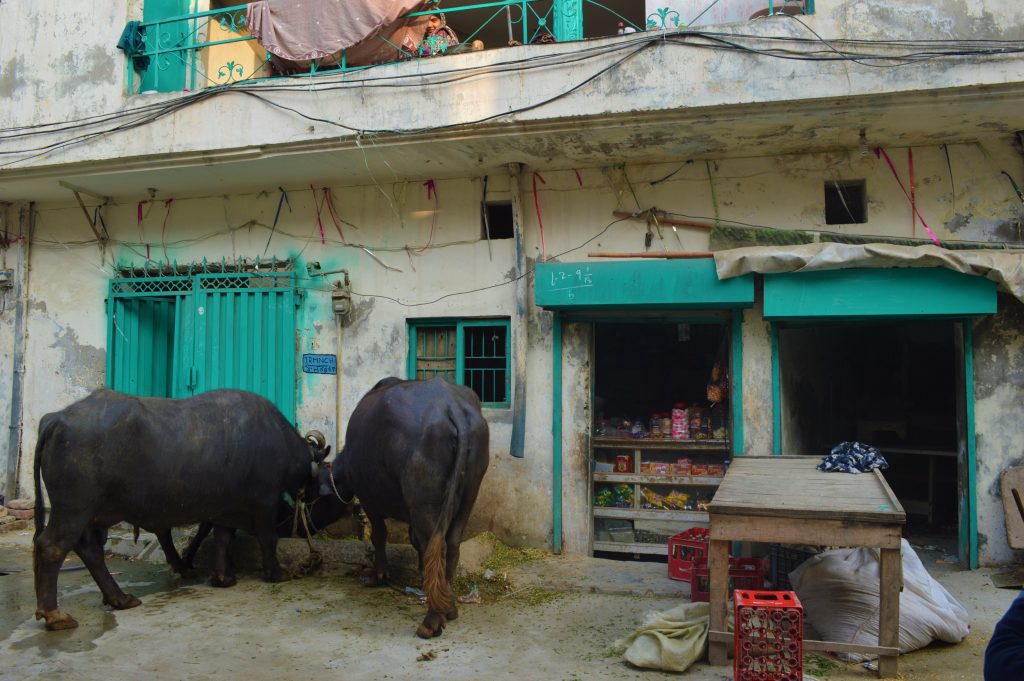 I would have thought that impressive, but to people here, being a ‘student’ is a bigger leap in status. When I ask them what they do, they assume that’s the answer I’m looking for, that in my point of view, it’s the ‘right’ answer.

Their urge to represent their community in the best light is obvious. It’s also obvious that education is a luxury not everyone has access to. Apart from the availability of schools, the residents have to face questions like who’ll watch the smaller children while the parents go to work, and if the family needs another helping hand. Choong Pind is a community where the immediacy of making money is more important than long term goals.

Perhaps this is why there are so many pigeon catcher cages all around Choong pind. The residents of the Choong Pind love to engage in kabootar baazi. 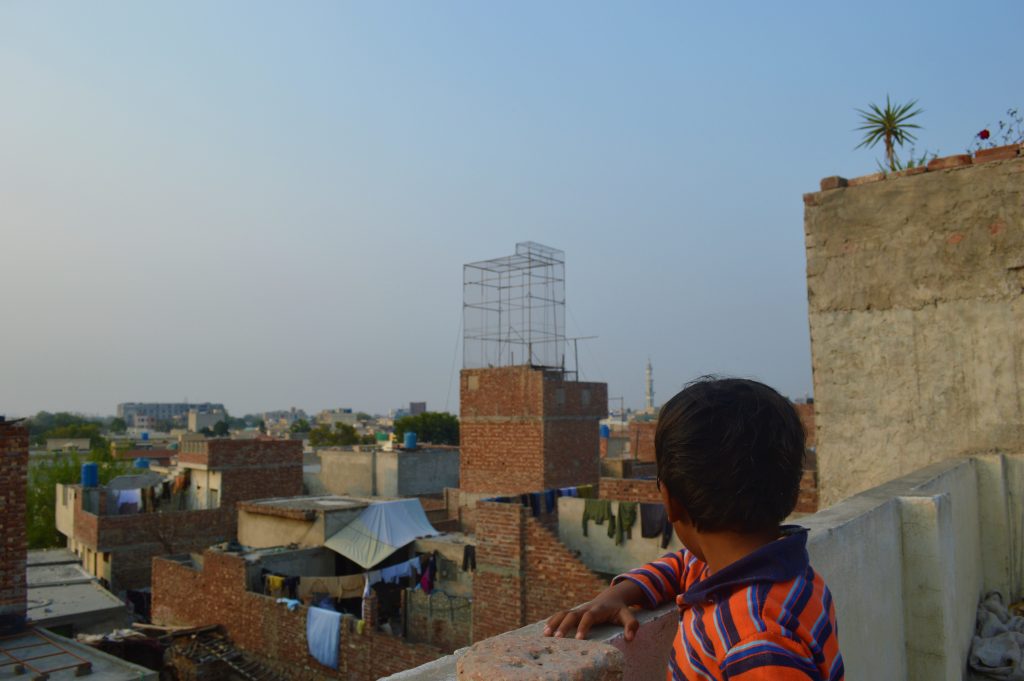 Kabootar Baazi is a game in which people bet on pigeons. If your pigeon can fly the highest and returns first, you win the game. Another past time is Teetar Baazi or Kukar Baazi; raising a rooster or another bird as a house pet, and training it to fight. People bet on whose rooster will win the fight, making small sums of money very quickly.

I’m taken into the Choong Pind Church by a woman who is eager to show it to me. The church is a large, oblong room decorated with shiny party decorations and a large cross in the middle. I take off my shoes before entering and take a look around. 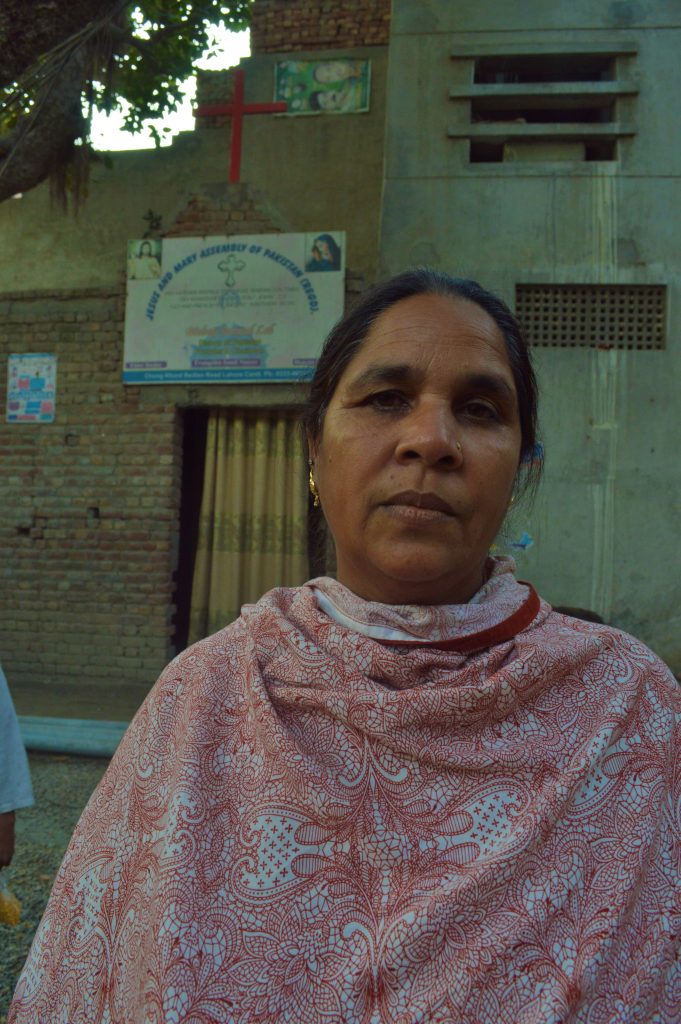 The next stop is Nawab’s house. Nawab’s husband is lame after a motorbike accident that occurred five years ago, leaving one of her daughters with a limp as well. Nawab and her eldest daughter clean houses to support a family of eight people.

Nawab tells me she plans to enroll the children in school again, including her eldest daughter who used to attend a private school until her father’s accident.

On our way out, we pass children and animals, men and women. Occasionally, we pass an open gutter. 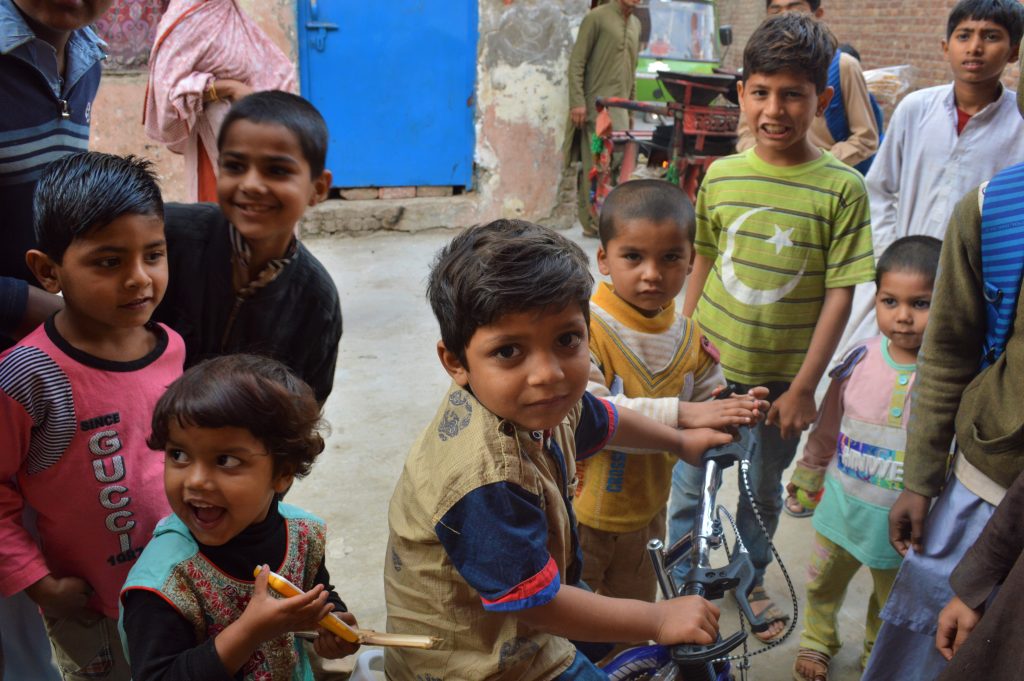 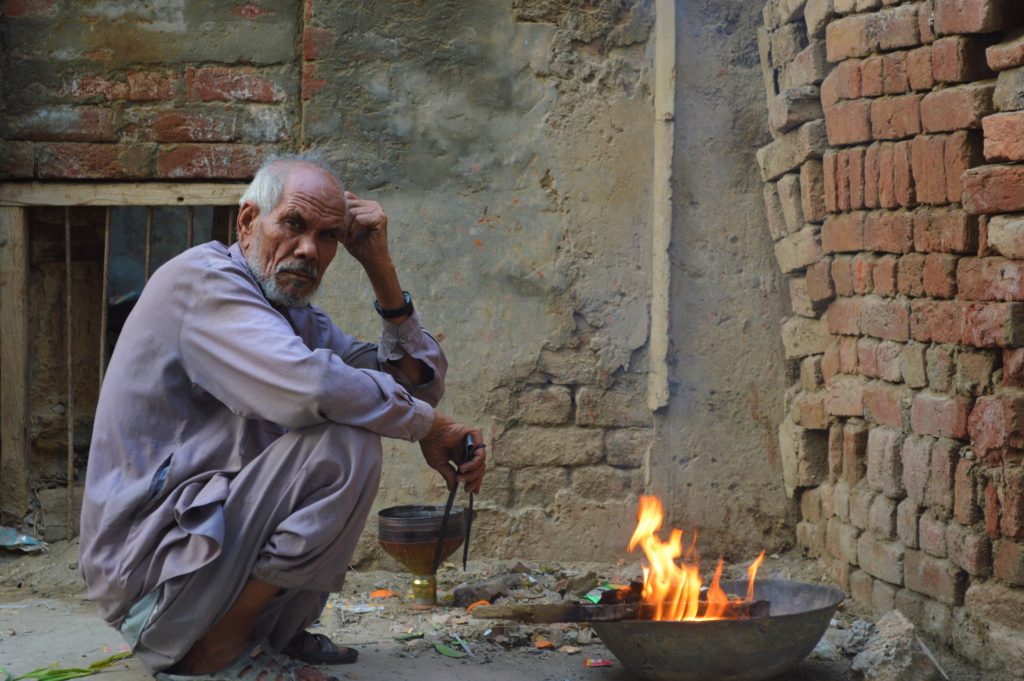 We come across a man warming his hands by a makeshift fire. I ask him if it’s okay to take his picture; he stares back pointedly. Nawab informs me that he is kamla. A “kamla” is a person who isn’t sound of mind, someone unable to understand normal communication. I repeat my question carefully. I’m about to walk away when he tells me, in a deep voice, that he’s a rang saaz; a marble polisher. In other words, not kamla.

I ask Nawab why she said that he’s mentally unfit. “He wasn’t answering your questions,” she says in Punjabi, laughing.

On our walk towards the Choong Pind schools, Nawab tells me people prefer government school to the private school. The government schools charge Rs.20 per month for one child. The boys’ branch has been running for a while and the girls’ branch was built recently. The private school fees start from Rs. 500 to 1000 per month, and increase as the child graduates into higher classes. 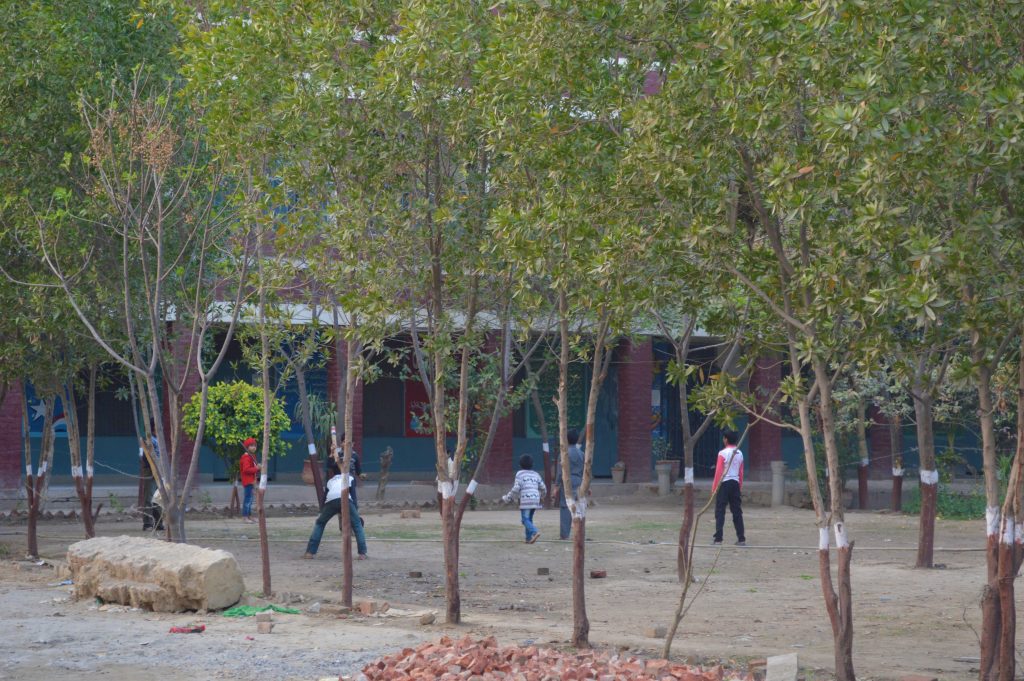 We’re on the outskirts of Choong now, at the ganda naala — an open sewage system, from the look and smell of it. The name gives away its function. In Urdu, ‘Ganda’ means ‘dirty’.

On one side of the naala, there are auto repair shops selling tires and various car parts. On my side, there are raddi waalas, shops selling sweetmeats and serving fresh food. The raddi walaas are where people come to sell trash, Nawab tells me. She brings the trash she collects from the houses she works at, they weigh it and offer a price.

Finally, we come to Al-Madina Milk Sweets Shop. I sample some hot jalebi, a dessert made by frying sugar-filled dough in boiling-hot oil. I try the samosas, a savory concoction of pastry filled with a mixture of herbs, spices and mashed potato. Al-Madina Milk Sweets is the go-to shop for the residents for buying dairy products and other related groceries. 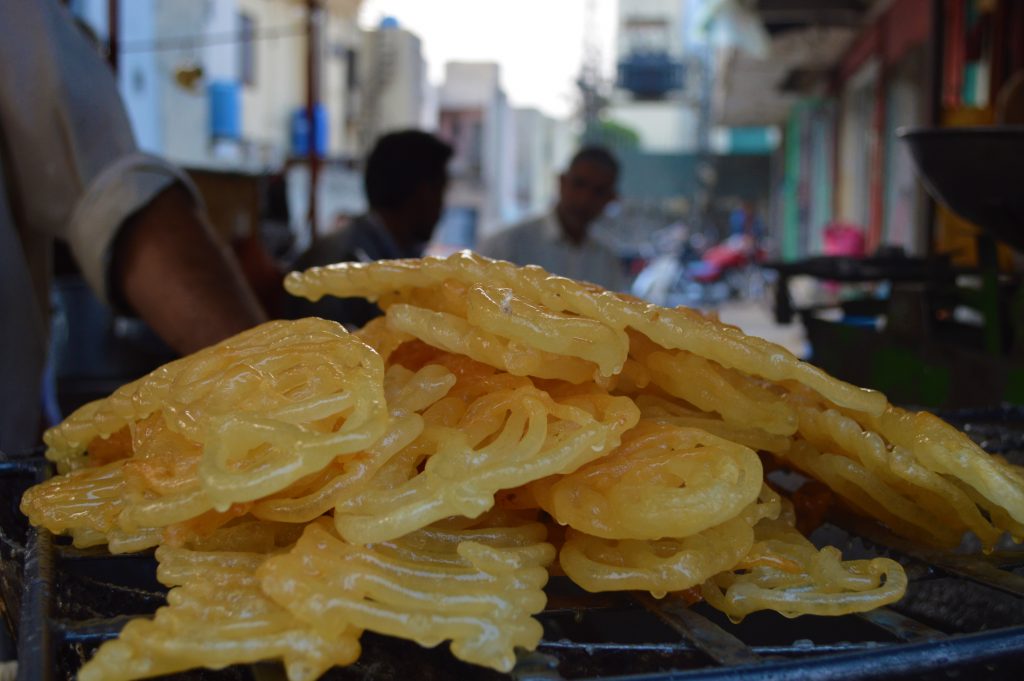 There is a vegetable cart a few paces from the shop; I ask the man behind it if I can take a picture. He shakes his head vehemently. Here, by the ganda naala, I feel more conspicuous than I did in the streets full of playing children, with women watching me from their balconies. The ganda naala is a place of business, a place of men rather than children. Soon, I head back into DHA with a bag full of jalebis.

Tags:
For the Squad, The Great Outdoors
Share:
previous article next article