Chauburji is a relatively small Mughal era building in the city of Lahore. It is located at the intersection point of Bahawalpur road and Multan road. The building was raised in 1646 C.E during the era of Emperor Shah Jahan. The building originally served as a doorway to a large garden, which was later destroyed by the flooding of River Ravi. No remnants remain today from the ancient garden save the Chauburji Gate. I reached Chauburji in the afternoon heat to explore this monument.

Chauburji (four towers) embodies elements from both Mughal and Arab-Persian architecture. Perhaps the most unique feature of the monument is the four minarets, which grow wider towards the top. Some historians have speculated that the four minarets were originally capped with cupolas which must’ve eroded with time. 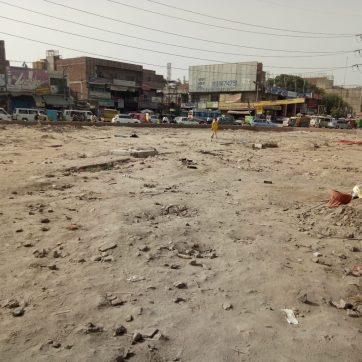 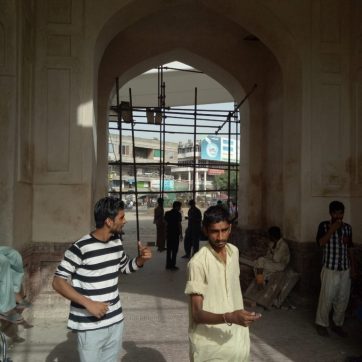 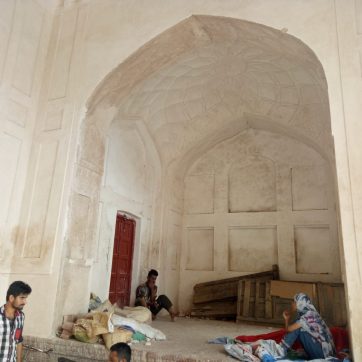 The building was once covered and decorated with intricate green and blue Kashikari frescoes and tile work. I found that most of this has faded away entirely. The Western and Eastern fronts of the monument are embellished by two-story Timurid-style Iwans, which is a large rectangular wall. The Iwans are also decorated with muqarnas which is a Persian style of vaulting. Most of the old inscriptions on Chauburji have corroded away except the Ayat-ul-Kursi worked on the front of the building in porcelain.

CHAUBURJI: A HAVEN FOR DRIFTERS

As I walked across the courtyard of the monument I observed it strewn with rubble, heaps of sand, and trash. A horde of junkies lay beneath the sparse trees that dotted the grounds. Some were smoking while others gazed at the sky. A small group of them were arguing about something but I did not attempt to eavesdrop. A young man made a whistling sound toward me as If inquiring what was I doing there. I silently stared at him till he turned his face away.

The whole building was scaffolded in rusted iron. Perhaps, the authorities had forgotten that they had to renovate the building as I did not see anyone working there. The outer walls seemed waterlogged. Drifters slept comfortably in the alcoves. I amused myself by wondering if the Mughals had raised the monument so that these castaway junkies could use it for their worthy endeavors. How far-sighted the kings of old days were and how wise our city authorities who understand and obey the messages of the past so easily.

The building is dilapidated and crowded by such noble people that I would advise against visiting it. Do not expect to walk away culturally enriched at least. Explore the Walled City instead.