You have probably experienced at least one huge buffet lunch, hosted by a visiting, green-card-holder relative, to bring everyone together in case someone passes away before the next time they visit. Fun times. I had the pleasure of being a part of one such buffet lunch at Chandni Chowk and of course I was happy. Free food!

I despised Chandni Chowk before my most recent visit there. All of the family buffets that I had ever been a part of were hosted in that one restaurant.

I was sick and tired of going to the same boring place every single time, but this time I was stunned. They had renovated the entire space and it looked absolutely amazing. The interior had a traditional “Mughalia” feel to it. With green brown and gold it was giving us major Royal vibes. For once I was actually glad that I came. I could feel the day taking a better turn, I was excited, I was curious and I couldn’t wait to dig in.

There was so much food to choose from that I stood there staring for a while unable to decide. Picking up my plate I took a deep breath and whispered to myself; activate Jughead mode! 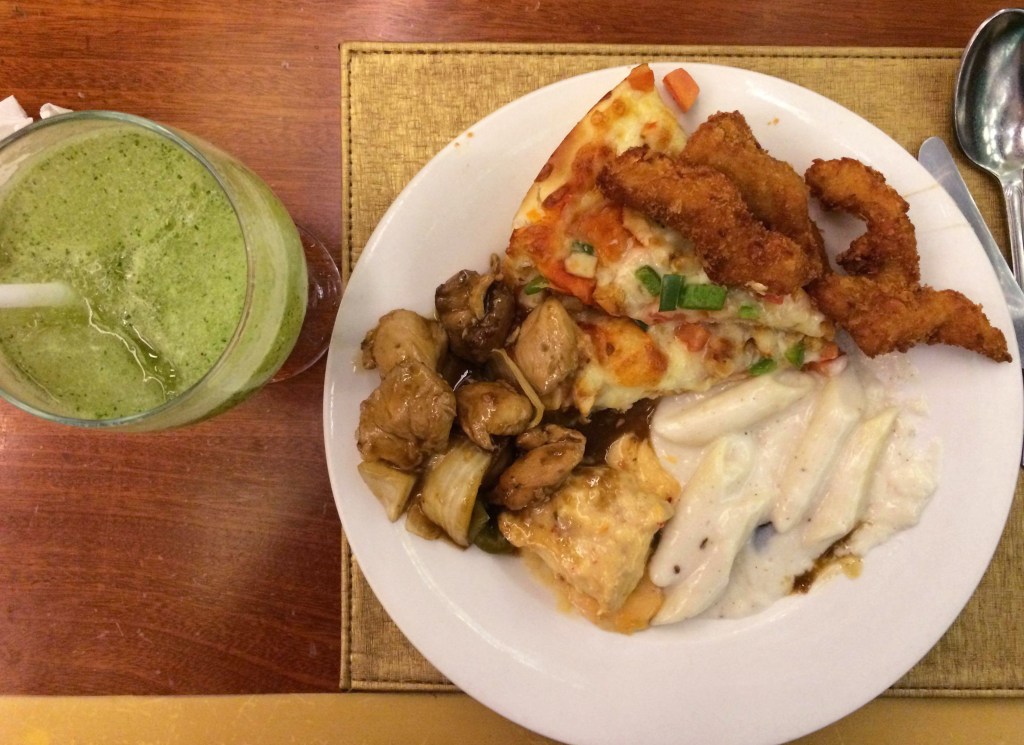 I was planning to try as many food items as I can at Chandni Chowk, so I got malaai boti, veggie pizza, salad, chicken kebabs, a mini burger and a few pieces of fried fish for the first round. The malaai boti was what I loved the most from this lot. It was so soft and so perfect. It wasn’t overpowered with spices; it actually had a very mild spice level which I loved. It almost had a texture of soft chewy cheese. Malaai boti never tasted so good at Chandni Chowk before. Maybe it was the new interior talking, but whatever it was made me very happy.

The pizza had tomatoes and capsicum and that’s about it. I did not taste any vegetables other than tomatoes and capsicum but it still tasted amazing. The stringy cheese and the flavor of the sauce and the vegetables had me craving for more. The salad tasted pretty average, it’s safe to say that it was my least favorite one from the first plate. The chicken kebabs were so juicy and flavorsome but a bit oily at the same time. They had just the right amount of spices; not too spicy not too mild, just right. 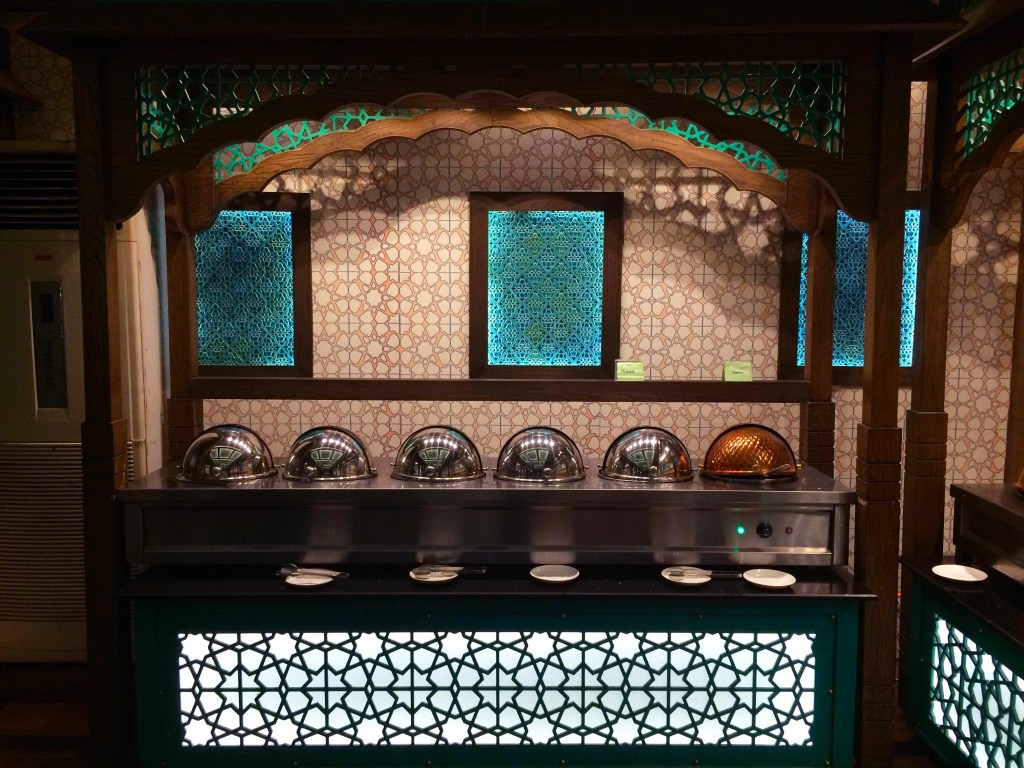 I then paid a little attention to the fried fish which was undoubtedly my second favorite food item. It was so firm and crispy from the outside yet soft and tender from the inside. It didn’t feel too oily or too dry. I then turned to the mini burger. It was not good at all. The bun was crumbling, the patty was extremely dry and the only sauce that was in there was the raita sauce. Raita and I, we don’t sit too well so I had to pass on that miniature disaster.

I ordered a mint margarita (you can get unlimited drinks at Chandni Chowk for just PKR 99) which seemed more of slush then mint margarita. The flavor was really good, it had the perfect taste, fresh and tangy, not too sweet, just the way I like it. The only problem was that it has too much ice in it.

For the second round I got prawn Manchurian which was absolutely awful. The seafood did not seem fresh and was extremely salty. I heard the Dead Sea calling; it wanted its salt back! I had to waste the prawns even though I love seafood. It made me feel horrible. Next I tried the egg fried rice, which tasted pretty average. I would rate the rice a 5 out of 10. I also tried the fish kebabs that were a little too soft for my liking. I was hit by the spices in the face on my first bite and not in a pleasant way. I then tried the chicken shehanshahi tikka, which sounded really fancy and so I had high expectations for it because it looked and smelled delicious. I took the first bite, that’s when I knew; I was wrong…so very wrong. It was covered with chili flakes on the outside but was drier than the Saharan sand from the inside. It has no flavor whatsoever. Then I reached for the tiny fried chicken piece that I had put in m plate and it was exactly the same as the Chicken Shehanshahi Tikka; dry and flavorless. 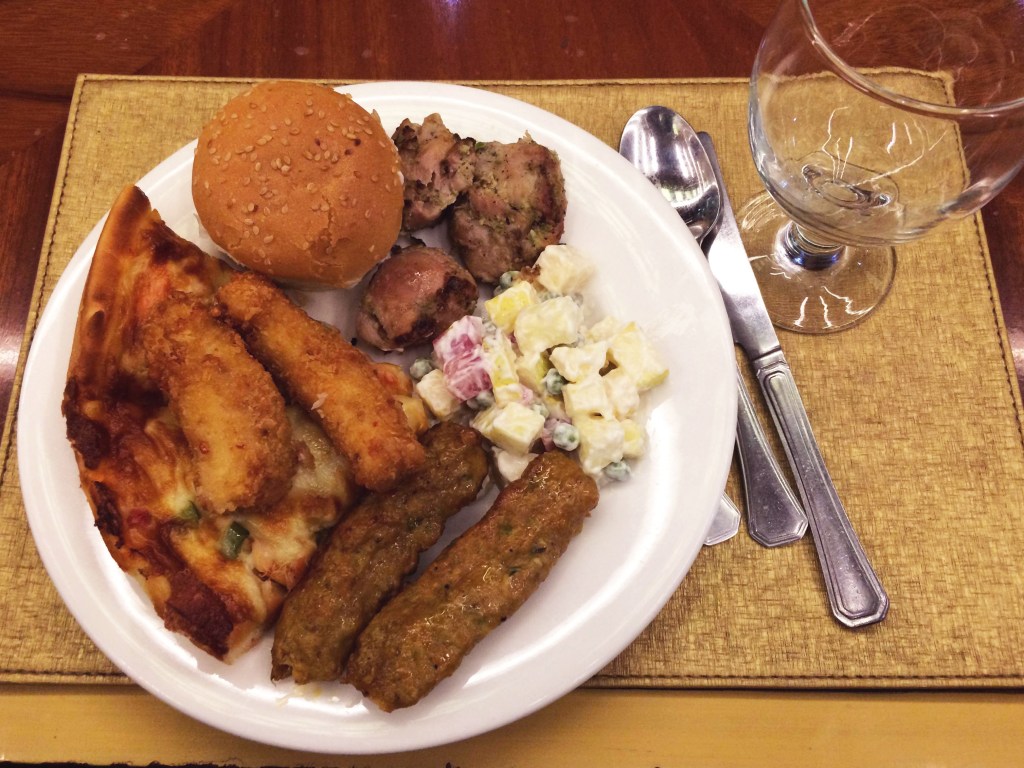 At this point I felt exhausted because I take my food very seriously. So I reached for the safest food item in the plate that I knew; pizza! A little sweet a little salty the pizza was perfect without any faulty (he-he)! I then reached for my drink that was Fresh Lime and it was a disappointment. The drink had no fizz and very less lime juice. That’s when I decided that I should stop.

Just because I had a bad second round doesn’t mean I didn’t enjoy the first one. I was experimenting more than enjoying the food items that I liked so I would still recommend that people visit Chandni Chowk because it has a large variety of dishes to offer including ice creams and desserts and all of that just for PKR 1000. Also you can cram as many as 27-29 people in one buffet reservation. And that seems like a pretty fair deal to me.