Also known as Lahore Cathedral, The Cathedral Church of the Resurrection is an Anglican church on Mall Road, opposite the Lahore High Court. The cathedral was constructed in Neo-Gothic style, between 1877-1887, and was consecrated on 25 January 1887. Renowned architect John Oldrid Scott designed and built it out of pink sandstone.

The people of Lahore refer to the Cathedral Church as ‘Kukar Girja’. ‘Girja’ is an Urdu word meaning ‘church’; it descends from the Portuguese word ‘Igreja’. ‘Kukar’, on the other hand, denotes the weathercock mounted on the central lantern of the cathedral. Hence the name. The cathedral has an ancient Saint Thomas’ Cross, which was excavated from the archaeological site of Sirkap close to Taxila, in 1935. 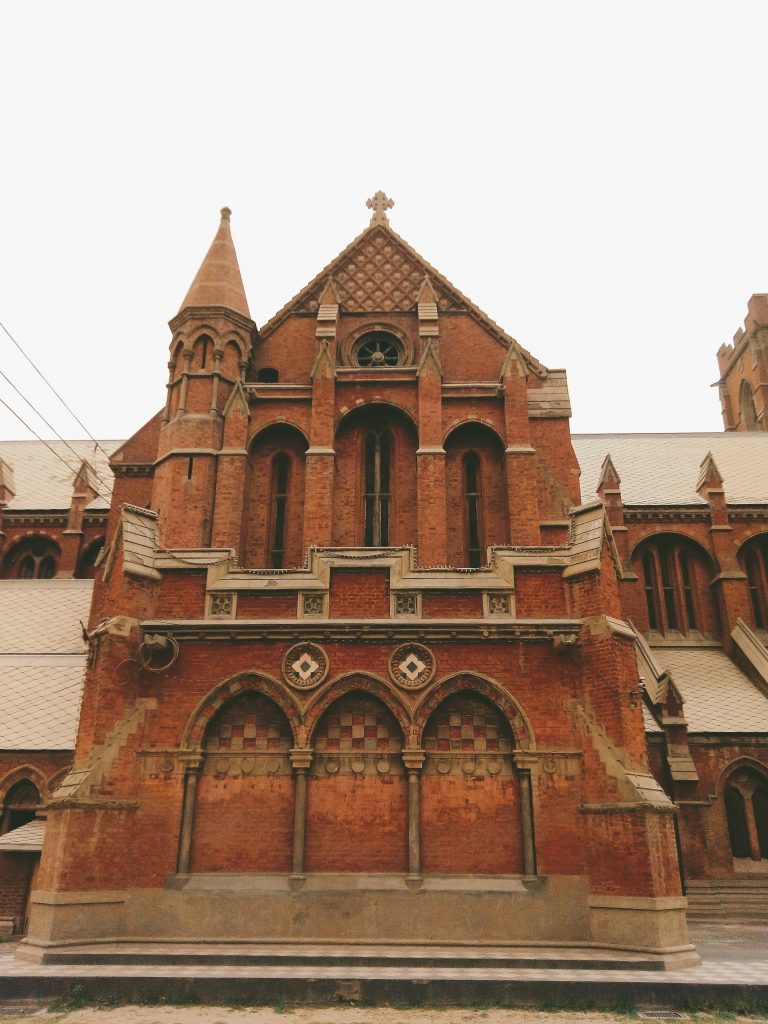 When I arrived here at 11 AM, the security guard directed me towards the office of the Bishop. The office stood opposite the cathedral. He, in turn, asked me to see the Reverend and seek his permission to tour the cathedral. An elderly man escorted me to the Reverend inside the church. 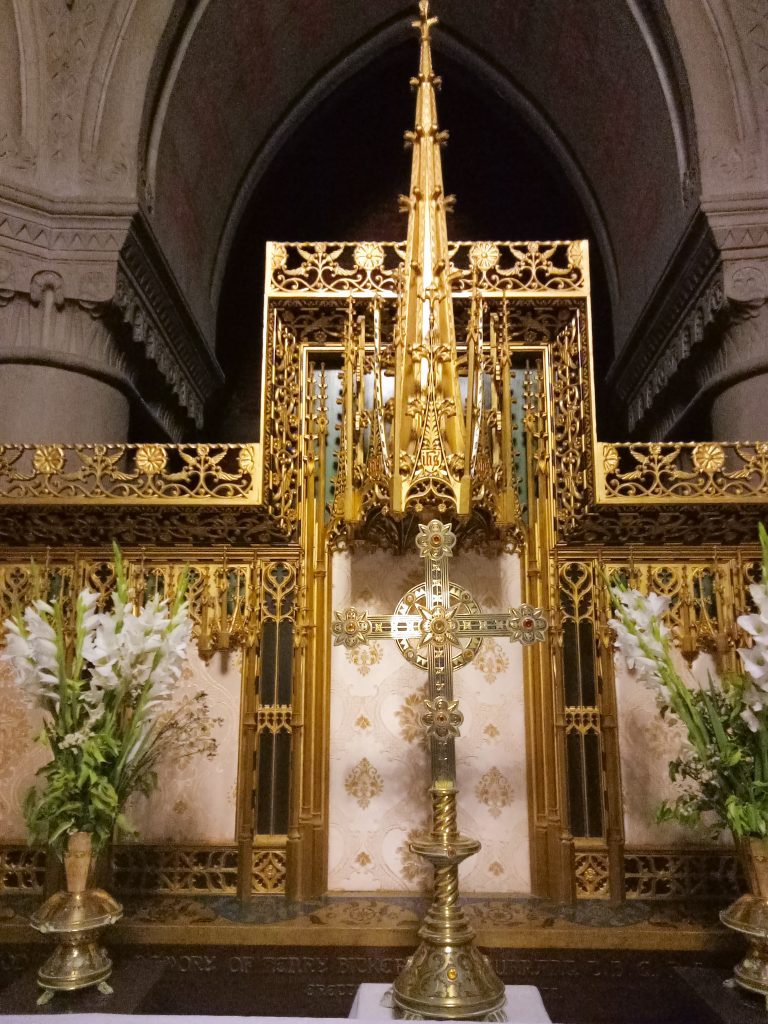 I was asked to sit on a bench, as the Reverend was busy meeting some guests. Momentarily, I was summoned to meet the reverend. He kindly asked me to share information regarding my website with him. Once I had satisfied his queries, he allowed me to stay inside the cathedral as long as I wanted, to observe and photograph it.

Once through the main gate, lanterns and fans hang from the tall stripped ceiling. Between the chocolate benches in the name of the church, a pale red carpet stretches until the crossing. I walked on the carpet towards the altar at the opposite end of the cathedral. The golden altar shone brilliantly in the lantern light. I walked back to the pews and sat there to absorb the grandeur of the mammoth building. Gothic architecture is not considered beautiful; instead, it is deemed ‘sublime’. 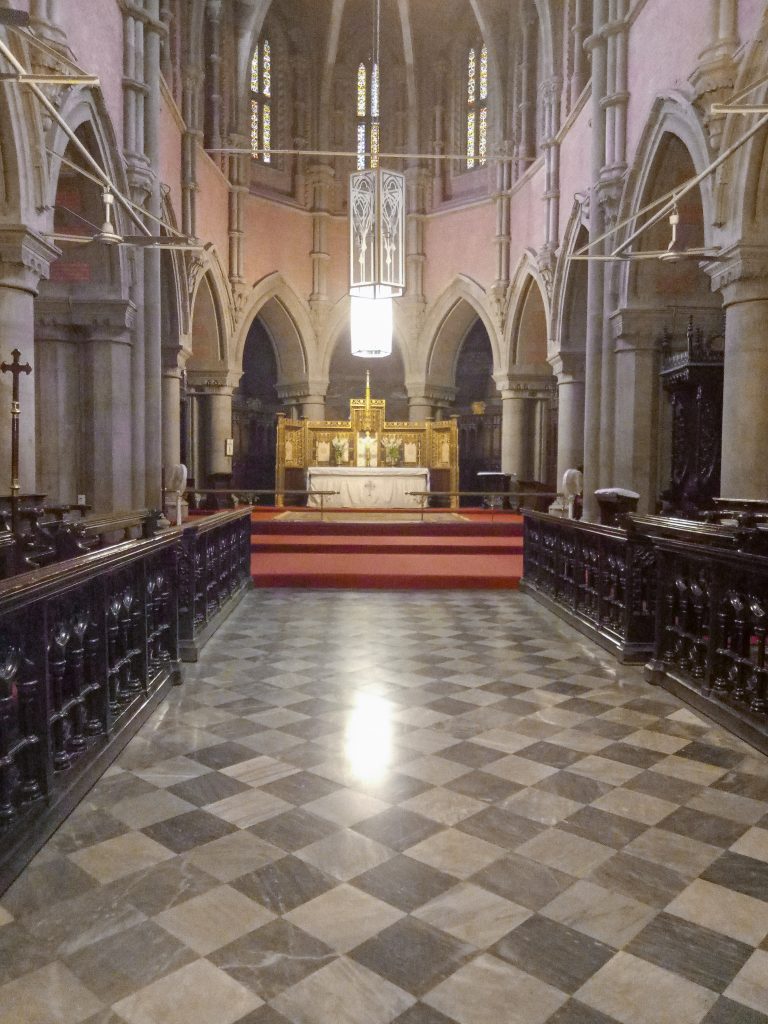 The benches designated for the choir stood opposite each other on both sides, with a naked checkered floor between them. Despite the raging heat outside, the atmosphere inside the church was comforting. The ribbed vaulting pointed arches, and transepts evinced that the Kukar Girja was built in strict submission to the classical European design for cathedrals. On both sides, above the ambulatory, there were fixed several stained-glass windows with Christian iconography. 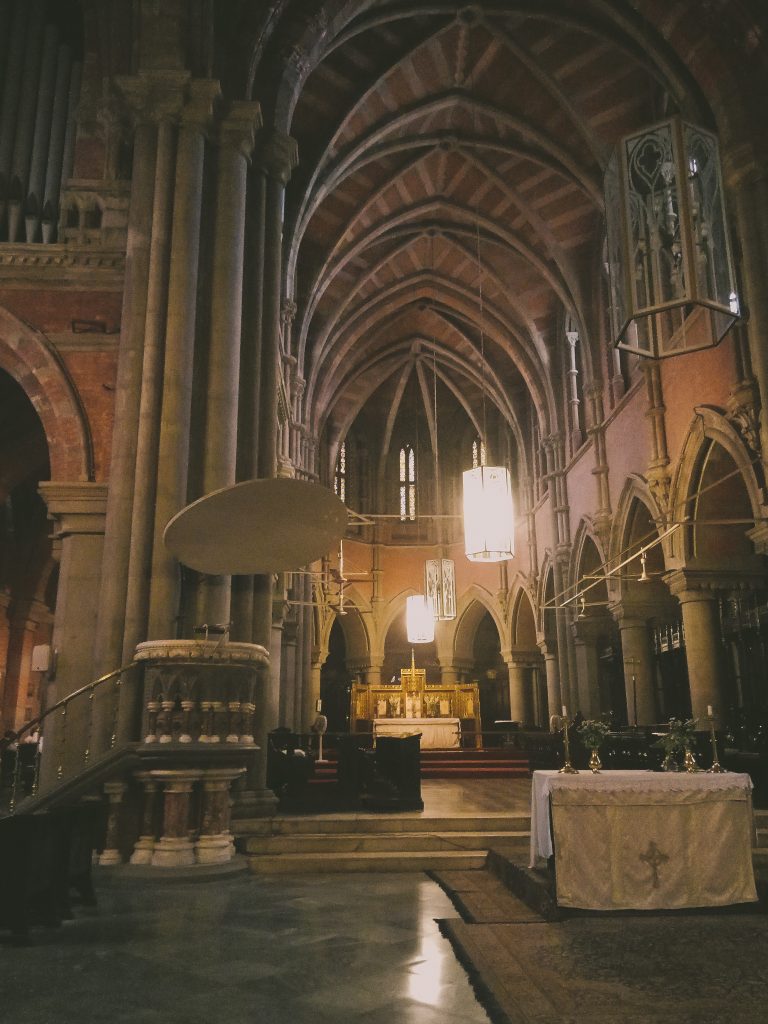 Outside, the cathedral, boys from a nearby school were playing cricket. I walked around the church. From an angle, the church looked alien, as if transplanting overnight from another land.

The Anglican Cathedral Church of the Resurrection offers an English language Communion service at 08:00 and 17:00 every Sunday.