“Having someone to talk to about books, someone who is excited about books, is above the vulgarity of business.”

I reach early for my meeting with Aysha Raja, descending into an air-conditioned basement guarded by a Wonder Woman mural at the entrance. It’s late afternoon and the store is empty except for two employees. I walk around, taking pictures; there’s something in the air that encourages tastefulness. One wants to walk silently, return each book to its place after perusal. Without overtly demanding it, The Last Word seems to encourage one’s innate politeness. Most of us, typically, associate this sort of effect with ‘walait’ — everything foreign, from people to places. Some of us, even, are intimidated by an effect like this. In my case, The Last Word had me at hello, which is to say, the Wonder Woman mural at the entrance.

When Aysha arrives, she spends some time making adjustments to the store before we seat ourselves in the children’s corner. From the onset of our conversation, it becomes clear that the atmosphere at The Last Word is carefully cultivated. Aysha doesn’t see The Last Word as a store, a business — she sees it as a space. The Last Word is an alternative dimension (if you will) where she can create a culture of her own choice, with the values she prefers. Speaking of events she’s organized at The Last Word, Aysha emphasizes creating a safe space for honest conversations. At The Last Word, tragedy and trauma aren’t sound-bites. Press isn’t sought after — unless an event requires it. The Last Word has hosted events about feminist issues, living alone, sexual abuse, the Arab spring and the Middle East, and Political Islam to name a few topics. Shezil Malik’s art work on the walls of TLW.

“There is such a currency on perceived perfection in Pakistan. The constant perpetuation of an ideal that is not close to reality. The idea that everyone should look the same; a set life that everyone wants to emulate.  You could be aspiring to this ideal but have a very troubled background. Maybe you’ve experienced abusive relationships, maybe your father doesn’t want you to get an education to the extent that your brothers have — no one wants to talk about these things that affect the majority. It’s unfair not to have a vent.” She talks about the different options that being part of a community can provide: the political route, practical steps. Or, perhaps, just survival. “Healing happens when you think — I’m hearing somebody else saying exactly what I went through. That’s essentially the function of literature.”

Aysha has previously worked as a lawyer and a radio host with her own show (FM89). The impetus to create The Last Word arose after living in Pakistan for sixteen, seventeen years. “I needed The Last Word because I had lived all kinds of lives; a fun, young life, I’d had a child. I’d inherited my husband’s clique of friends, but I wasn’t able to go beyond that and meet people with nuanced experiences. There was always an exterior that was maintained. The conversations I would have at parties — with or without alcohol, doesn’t matter — were so boring. The quality of individual I was encountering wasn’t satisfying me. I wasn’t getting an intellectual kick out of conversing with these people.” Aysha and Saniya discussing the layout of the store.

Much like the organizers of the Lahore Literary Festival, Aysha often rubs shoulders with the Who’s Who of publishing. Famous writers, Pakistani and otherwise. If the LLF crowd has been criticized for a certain elitism, The Last Word functions as a polar opposite. “Every independent bookstore represents its owner,” Aysha admits at one point. The Last Word is a place where the human experience matters, regardless of an individual’s background or successes, and this is reflected in the events Aysha organizes more than anything.

The store is a kind of dispensary: Aysha recommends books as solutions and learning tools, in a way that most people aren’t able to. I experience this first hand after sharing an account of institutional racism I experienced in London; Aysha’s response is to recommend ‘Why I’m No Longer Talking To White People About Race’, a non-fiction book  published in 2017 that explores the topic of racism without unnecessary diplomacy. I couldn’t help sharing my story after hearing her account of being harassed by her previous landlord, an older man who felt entitled to being treated a certain way. No one in their right mind could describe Aysha as having a subservient attitude, and this became an irritant in her interaction with this older man. 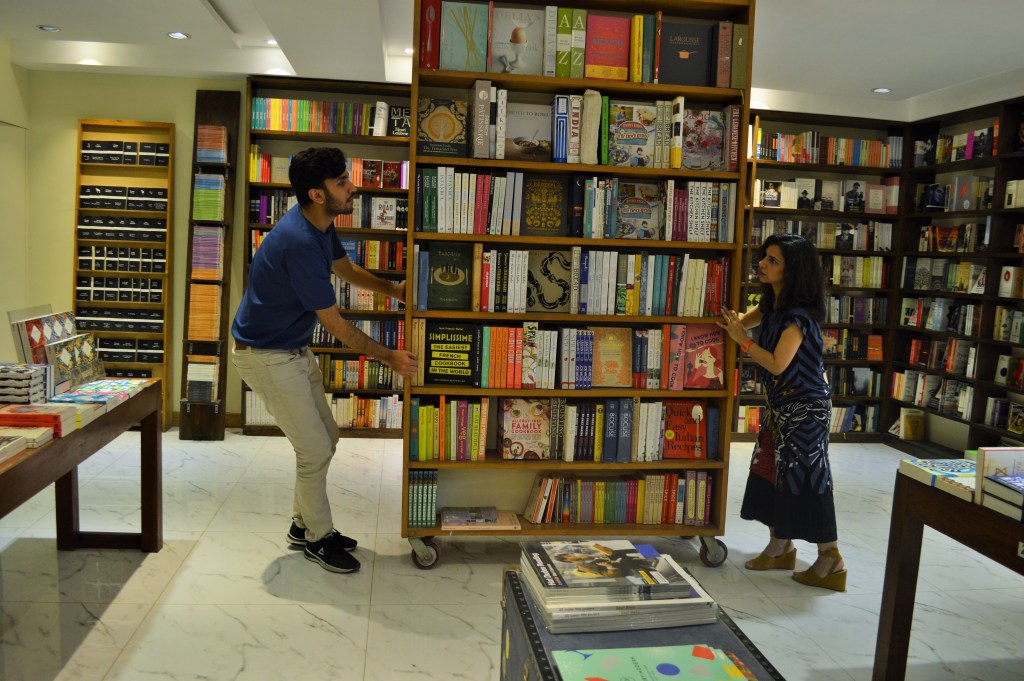 Aysha and Waleed setting up in the new store in DHA.

Eventually, quite unexpectedly, he went as far as to demolish a wall of the store, the one with the famous The Last Word mural customers remember — a little girl playing chess with a monkey. Many customers turned up to show support, and despite repeated intimidation and even physical harassment by the police, Aysha went on to fight a legal battle for her right to stay in the space.

“People didn’t want to believe it was about gender,” Aysha tells me. “The system doesn’t protect female business owners.” Referring to staying in that space, she adds “At some point, you wonder — is it worth going to sleep anxious?” I know some readers will be wondering why the landlord had an overreaction to The Last Word (and Aysha), but this is common. Aysha tells me that she’s heard many people,including feminists, silence women like her with statements like, ‘You can’t comment because you come from privilege.’ All this seems ironic when a family walks into the store and overhears us speaking about the landlord episode; the woman is a business owner who had her own share of traumatic experiences with the same landlord. It makes me wonder why people are under the impression that surface privilege protects women in a society structured to be comfortable primarily for men. There are some men (even — some people) who punish attempts to hold space in what they perceive as their territory, as I experienced first-hand at university. As we shared our stories, I experienced a sort of catharsis; it was a testament to Aysha’s ability to generate a chain of meaningful conversations. And this conversation was about power — and the misuse of privilege.

Aysha tells me that she was conducting a workshop on Political Islam (in collaboration with Arafat Mazhar, whom she holds in high esteem) when she received the call informing her of Sabeen Mehmud’s murder. Sabeen was the owner of T2F in Karachi, and committed to creating a space for open dialogue.

“Apart from being shocked and devastated by Sabeen’s death, I remember thinking: we should stop. Perhaps we should reconsider the boundaries we seem to be pushing up against. But it wasn’t what Sabeen would have wanted. The shock was that standing up for what was right had become dangerous. As a reaction, The Last Word began to be used as a space where people would congregate to deal with the complexities of life.”

I ask Aysha what it was like to create TLW, in the beginning; what reactions did she receive? “One of my husband’s friends sat me down and said, let me work on a business model with you. I said, alright – if you insist,” she says, sounding amused. He went on to inform Aysha that The Last Word was a ‘really bad idea’. “I was like, okay, see you later! What he did do, though, was scare of me off early in the game. People think of businesses as ones where you make profit really early in the game, and it has to be a sizable profit otherwise it’s not worth it.” 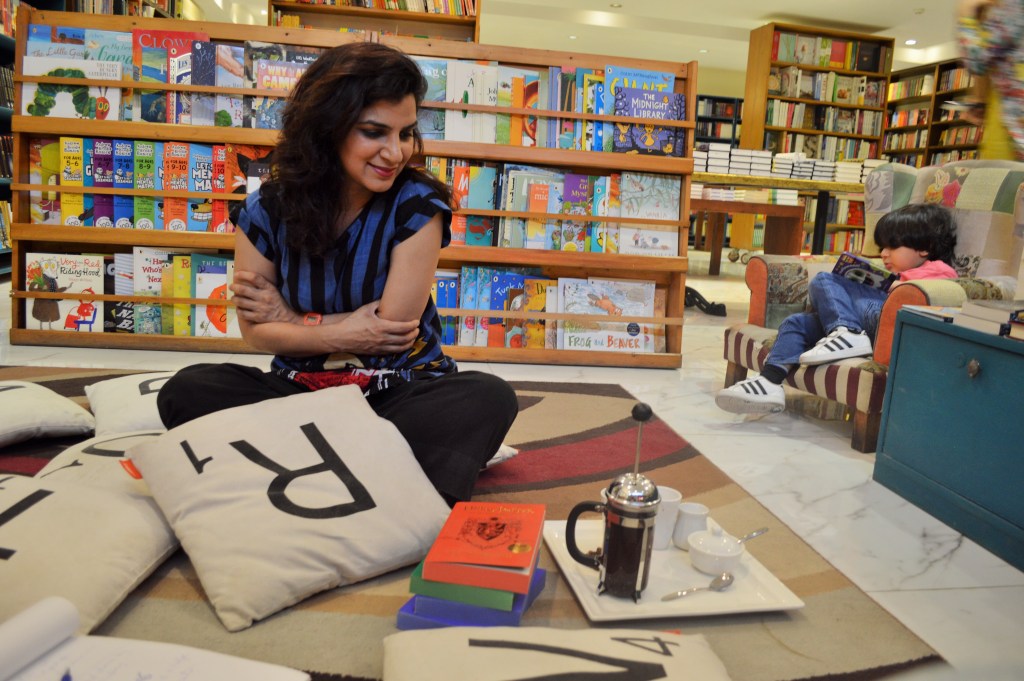 To clarify: the cause of this smile is the peanut butter chocolate cookie lying in the tray.

Speaking of mansplaining, we went on to discuss the silencing that occurs in the feminist community sometimes. “Some people are able to dominate because they adopt tactics such as bullying, gas-lighting and silencing. For example, telling women you can’t say anything because you’re privileged — you’re the elite. This only serves to weaken the movement and protects elite men, who can act with impunity as the women within their ambit are denied the tools to fight back because of their exclusion.” 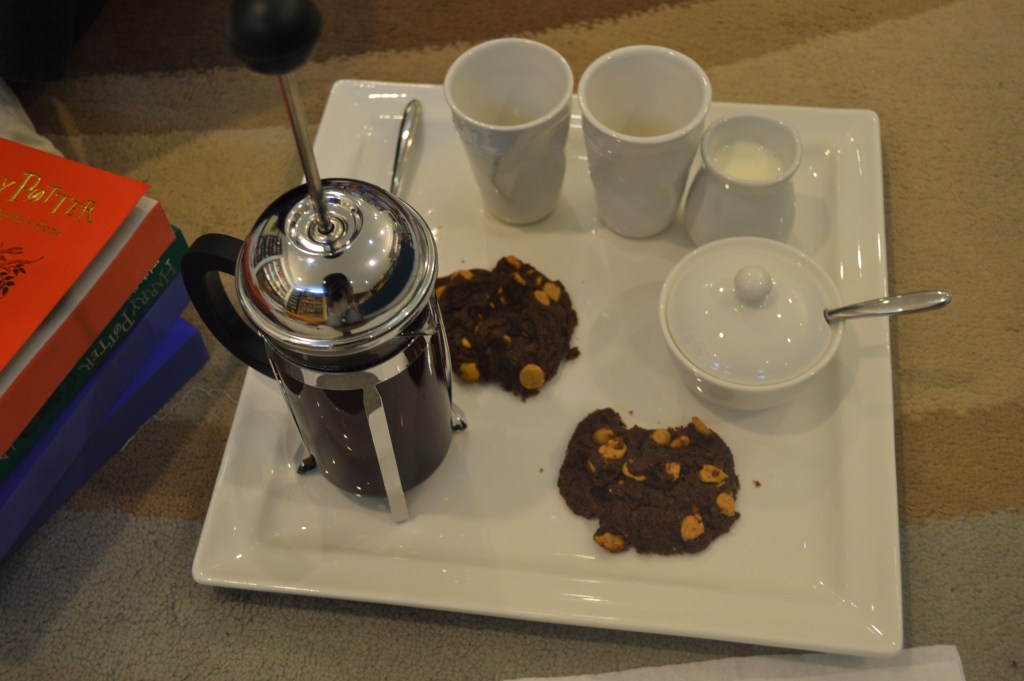 So how does The Last Word seem to be functioning so well, if there is no business plan?

“Having someone to talk to about books, someone who is excited about books, is above the vulgarity of business — it’s a relationship.” She recommends a recent Lit-hub article about the success of Indie bookshops in the United States, despite Amazon and large chains. “Human beings respond to things that are done on the basis of human values.”