Imagine a double big-mac. Now double that. Four tender, succulent beef patties, each of which is separated from one another by a thin slice of slightly melting cheese. Topped with mayonnaise and hollandaise sauce, placed atop a healthy bed of diced celery. Sesame-encrusted home-baked buns, very slightly toasted to give that much sought after smoky aftertaste. That, my dear friends, is “The Quadra”. A recently introduced addition to the Burger Lab menu, and number one on my gluttony list

The sauce was a bit on the excessive size; gorging on such a massive monstrosity of a burger is messy enough without all the extra sauce falling in blobs. Not exactly an appealing visual. The burger was redeemed spectacularly by the simple grace of a well-grilled smashed beef patty. Four of them, to be precise. 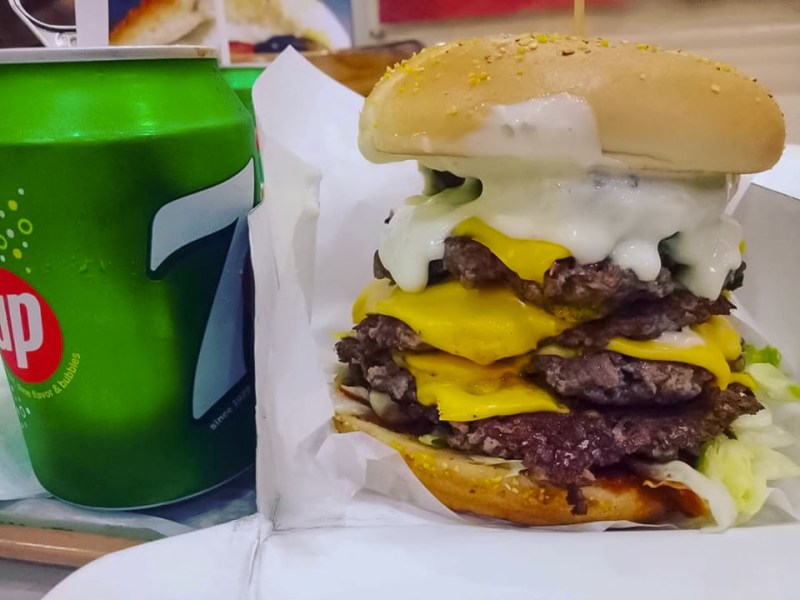 Even though the Quadra is designed to be larger than a mouthful, the smashed beef was grilled to perfection. It wasn’t excessively chewy or rubbery but had a juicy and surprisingly easy bite. The melting cheese, having oozed over between every layer of beef, provided a mellow nuance when coupled with the spiced hollandaise sauce used over the burger The sauce pleasantly enhanced the flavor of the burger, without overpowering the seasoned plain-grilled beef. I’d recommend it to anyone who is VERY hungry, and generally has a VERY large appetite- I made it halfway through the burger before giving up and requesting a to-go container! 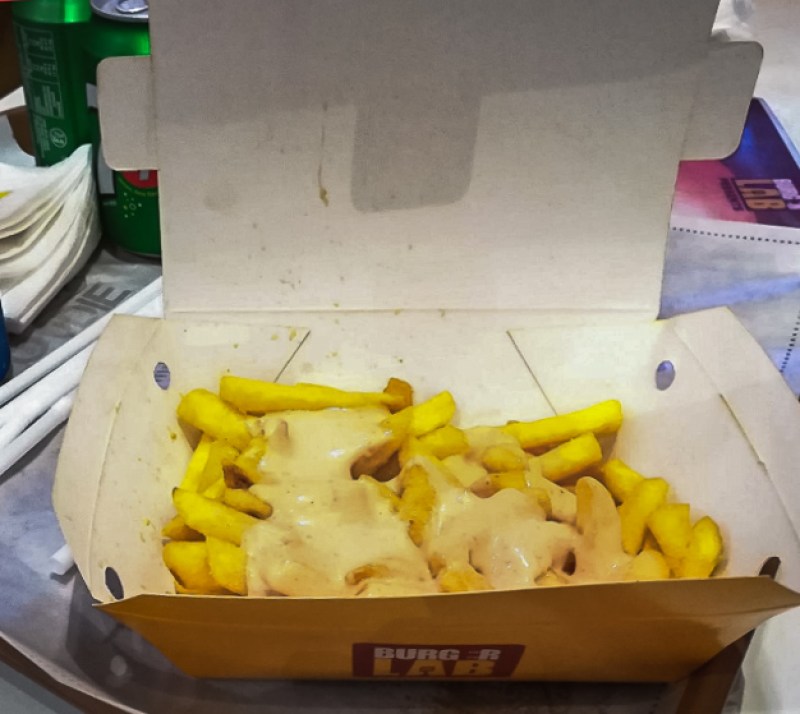 The fries. Gourmet BBQ Hickory and Smoked Mayo. For all the fancy titles, they proved pretty underwhelming. A mediocre quantity of French cut fries, unseasoned, packed in a box (shameful) and topped (over-topped) with sauce. I mean I don’t expect fancy thick-cut fries garnished with white truffles and sage for 230 rupees, but is it too much to ask for fresh cut fries and a simple way to separate my sauce. Not everyone likes to eat their fries drowned in ketchup. Having put my reservations of hygiene aside though, the fries weren’t that bad. It was evident that Burger Lab uses quality ingredients and follows stringent practice standards; I’ve never once detected a re-fry or reused oil in the taste of their fries. Even though the lack of garnish or a crisp element was missed, the fries would rate a decent above-average for their flavor (the sauce was well done) and for their simple no-nonsense French fry.

Burger Lab Karachi is not really known for crispy chicken burgers, probably because they don’t have the nicest crispy chicken burgers in Karachi. however, they have pretty good crispy onion rings, and if you’re a fan of crispy onion rings you need to try these out. The service was slow; my order took nearly forty-five minutes from ordering to receiving, on a weekday with barely any rush or traffic. The staff is very polite and hospitable, however, their lax behavior towards speedy service can be a deal-breaker for a person on a tight schedule – which is pretty much all of Karachi. With enough seating for about fifteen people, and relatively less hustle-bustle than most burger places, family-safe eating spaces and privacy would never be the issue.

The Quadra was a monstrosity of a burger. So many things could go wrong. Yet they pulled it off magnificently. The food at Burger Lab Karachi is at par with global fast food restaurants. I would recommend it to anyone who is in search for a pocket-friendly, quality burger place in this vicinity!