Broadway Pizza is famous for serving 20-inch slices for only PKR 399, with a drink and a side of your choice. Being a pizza lover, I was keen to check it out. 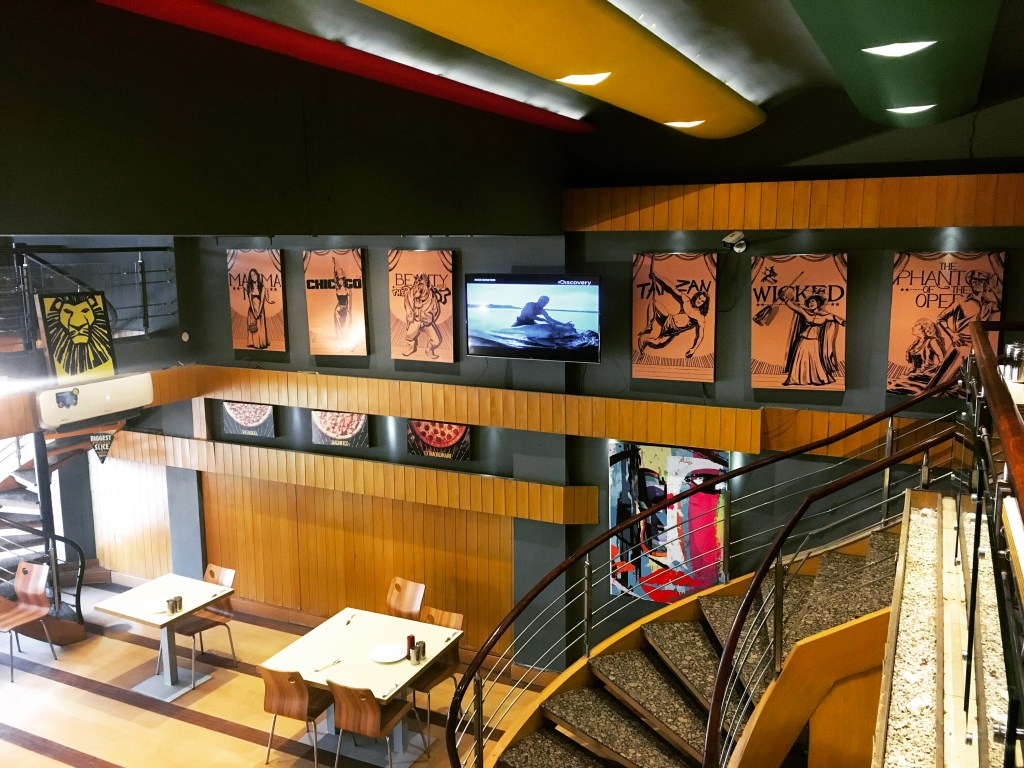 The exterior of Broadway Pizza looked like an old, green Lego. I went inside and to my surprise, it was nothing like what it looked on the outside. Full of surprises aren’t we? The hall was beautifully arranged with light and dark brown colors that gave it a homely feel. There was hall seating on the ground floor, and a gallery on both the front and the back side of the restaurant. I went to the upper level and took a seat. Here’s where things went downhill.

A lady came upstairs to attend us (I had a friend with me). While I was still looking at the menu she flipped the card from my hand and started telling me where what information was mentioned. It felt a little rude but I brushed it off. We ordered two 20 inch pizza slices that were part of the 399 deal. She suggested that we go with Phantom and Wicked Blend as they were the most popular flavors. Phantom had a topping of chicken tikka, chicken sausage, chicken seekh kebab, green peppers, onions, jalapeños and olives in it. Wicked Blend was supposed to have chicken tikka, chicken fajita, smoked chicken, mushrooms, olives and no jalapeños. 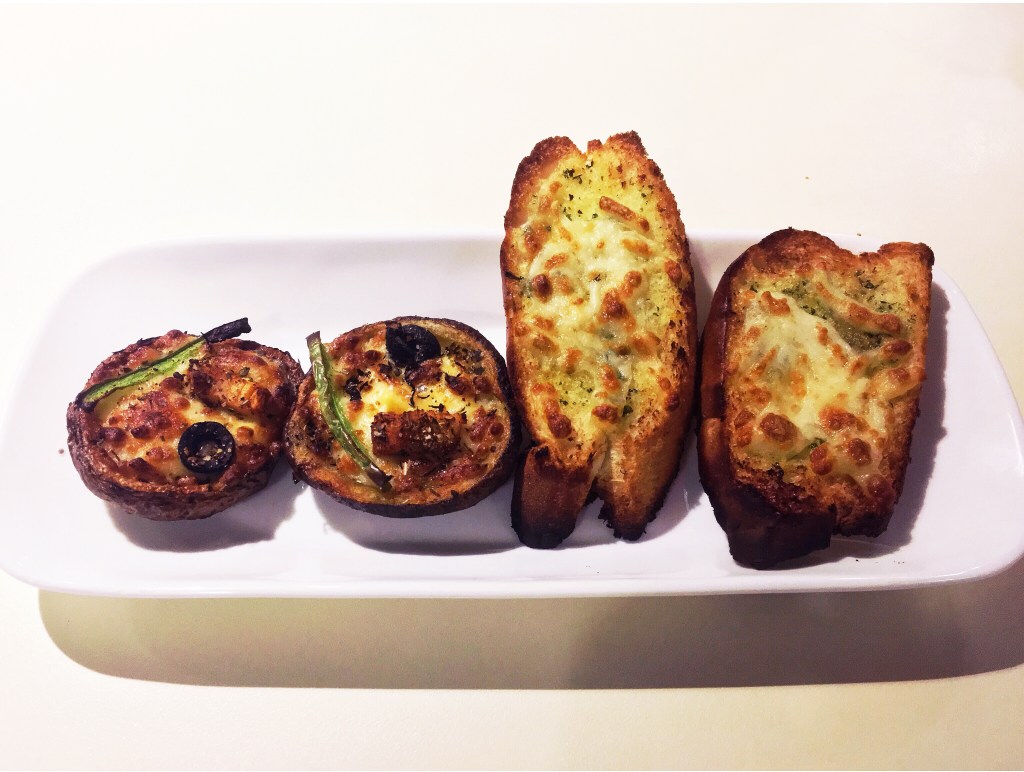 We ordered a side of garlic bread with cheese and potato wedges but were delivered potato skins instead. I didn’t get the chance to send them back to the kitchen because my friend got a little too excited and dove right in. The stuffed potato skins AND the garlic cheese bread were burnt. They were extremely greasy, so much that oil started dripping upon squeezing. The cheese, however, was hot and stringy and possibly the only good thing about the appetizers. A few minutes later we were served with our utensils and by utensils I mean just the forks and knives and no plates. We had to ask for plates later on as they had mistook us for savages who didn’t need no plates to eat a 20 inch slice of pizza. 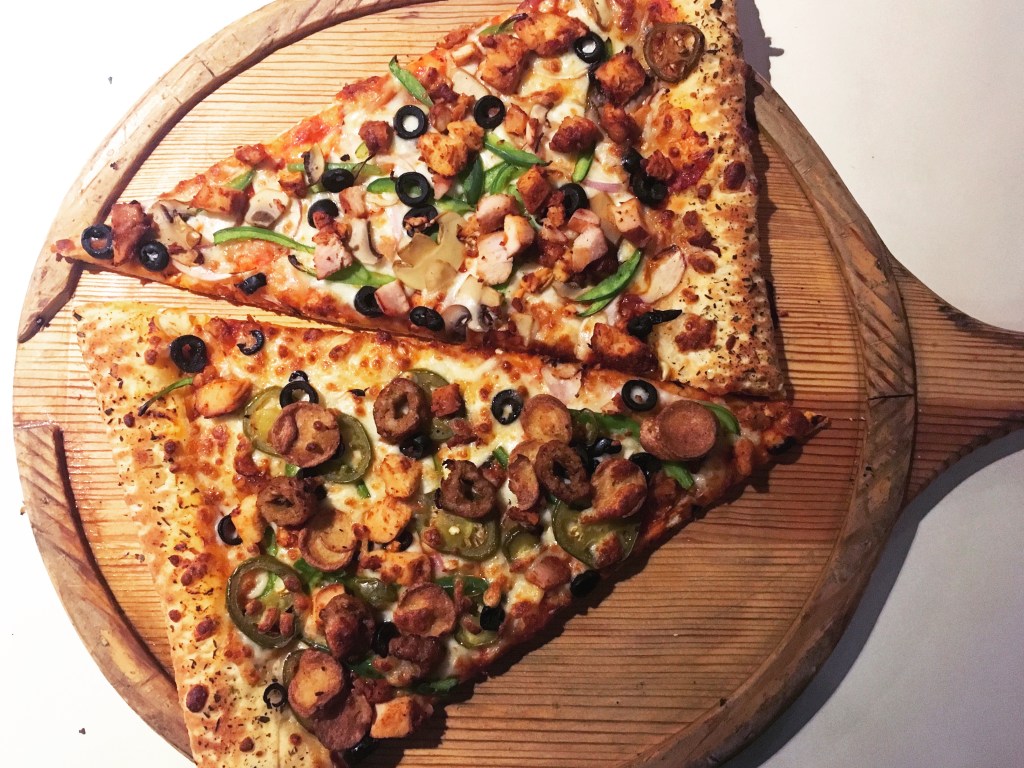 The pizza looked good. However, one of the slices (Wicked Blend) was not supposed to have jalapeños in. BUT IT DID. My friend is not very good with spices so he had to pick out jalapeños one after another from his slice of pizza. I don’t complain much when it comes to pizza but as soon as I took the first bite I knew I wasn’t going to be able to finish the whole thing. It wasn’t because of the size of the slice, it was just too greasy. The cheese was not stringy enough and it had no distinct flavor, despite all the toppings. All I could taste was mainly the dough and after that the jalapeños and kebabs.

Both flavors tasted exactly the same. The only difference was that Wicked Blend had mushrooms and Phantom had chicken seekh kababs. If I closed my eyes and took a bite of each slice, I wouldn’t have been able to tell them apart. While we were still trying to finish our food, the staff turned the music down and switched to blasting “The Kapil Sharma Show” on speakers. I was done with Broadway Pizza. If you want to visit a decent pizza place in DHA that serves delicious pizzas with sides that aren’t burnt, save your money and stay away from Broad  Disasterville Pizza; turn to Big Man’s Pizza or Manhattan Bites instead.