After having walked through the afternoon heat in Model Town, I decided to visit Benazir Kulfa, which appeared to be somewhere on my route on Google Maps. As I had not gone to the restaurant before, I imagined it to be a fine place with a variety of items on the menu. Upon arrival, my expectations were not met. However, Benazir’s Kulfa didn’t let me forget the true reason I came here, to begin with.

Benazir Kulfa is a small, humble shop opposite Ashrafi building on Zanjani Road close to Main Boulevard Gulberg. It lies amid a number of tall and haughty buildings. The shop consists of a small room with a little counter, above which a scale for weighing kulfa is placed. Opposite to the counter, there are three tables and few chairs, where the visitors can sit. 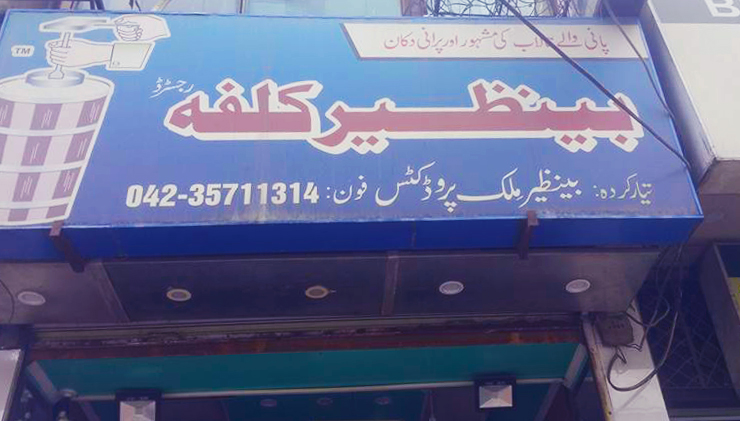 I pulled a rubber chair and sat in front of Benazir Kulfa. I asked the waiter about the menu. Rather than show me the menu, he told me that they offered kulfa, kheer, and noodles. I confess I was slightly disappointed, as I expected it to be a fine establishment with a variety of food items, such as creams and desserts. 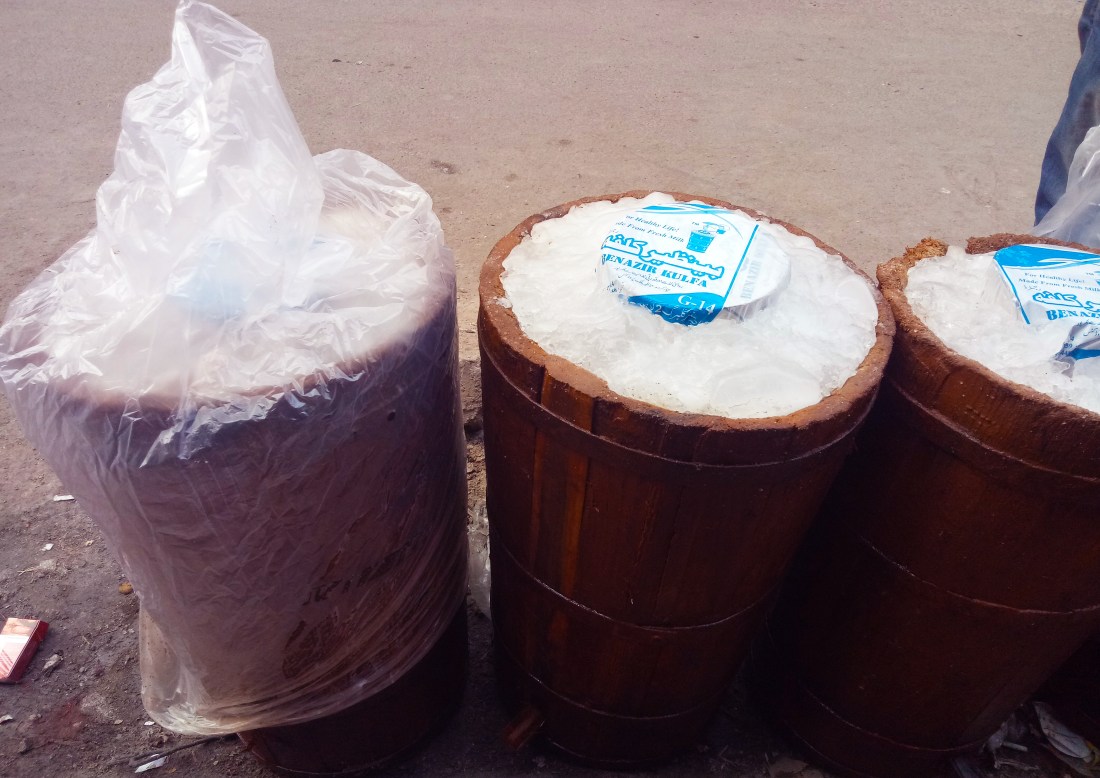 In front of the shop, there were four wooden barrels, which were filled to the top with ice. Sandwiched between layers of ice, were large lumps of kulfa covered in plastic to keep them cold. Their method to keep food items cold seemed archaic. Later, while taking pictures of the shop, I found a container in a corner which was filled with kheer. I could see that they paid very little attention to the aesthetics of food and did not worry about making the setting appealing for their customers. 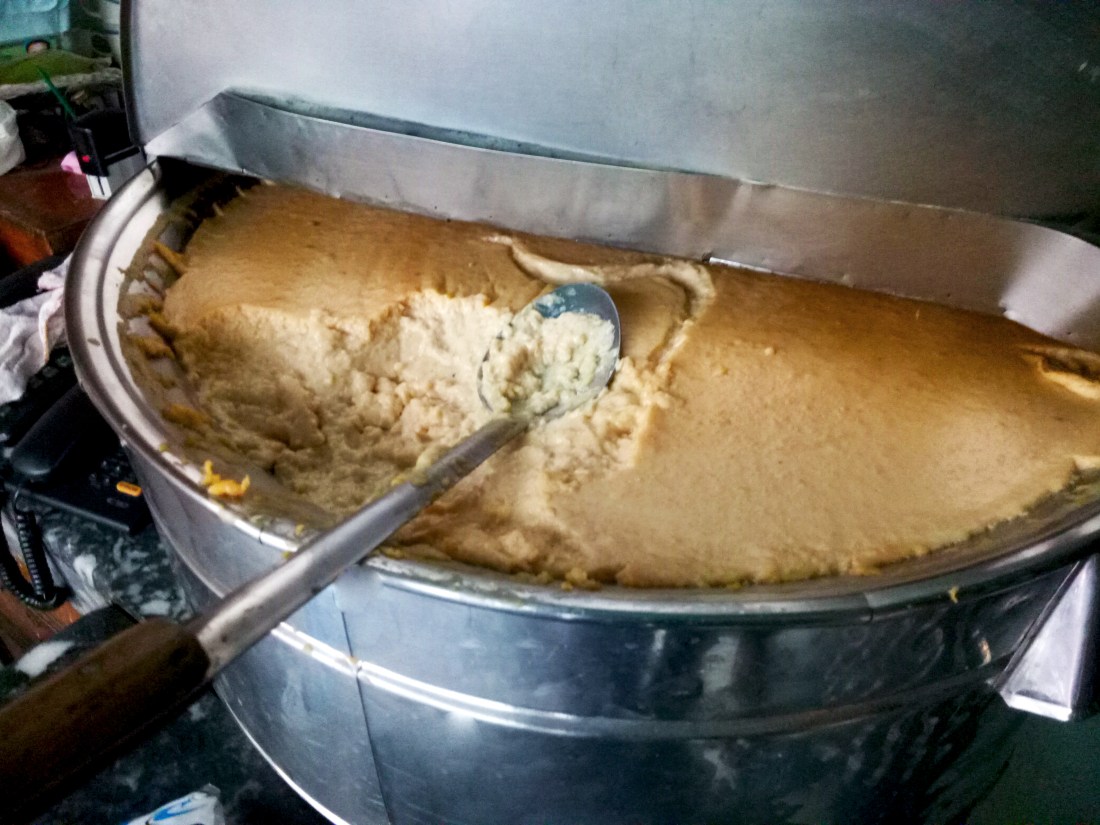 For myself, I ordered some kulfa, the quinessential Pakistani dessert. The waiter brought chunks of kulfa in a white plate. It looked like condensed ghee. I started taking spoon bites of the kulfa, and found that it resembled vanilla ice cream. After two or three spoonfuls, I could claim that Benazir Kulfa was exceptionally good and stood on equal footing with the famous falooda shops of Anarkali.

While I was eating kulfa, an elderly man came and started making ablution right in front of the shop on a water pipe. It was obvious that the shop sold its product to a definite set of customers, who knew them for a long time. That is why, perhaps, they did not care much about captivating new customers. I thought that an ice cream parlor, devoted to its customers, would not conduct its business activities in such a carefree manner. 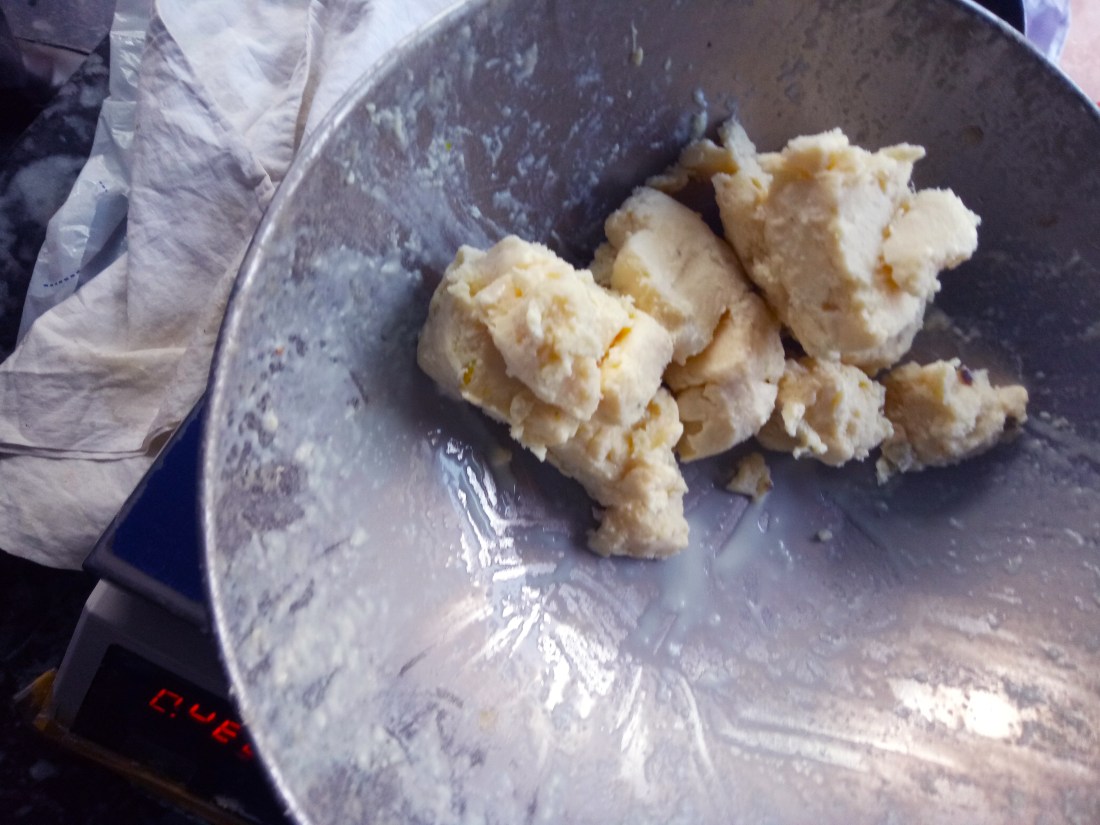 Paying little heed to the wants of customers is one of the major problems of traditional small setups in Lahore. And though this problem subsists across establishments, Benazir Kulfa tasted delicious enough to compensate for this oversight. The prices they charge are affordable, as is with most Pakistani street food, and what you get is what you pay for. So if you wander close by, stop for a bite.